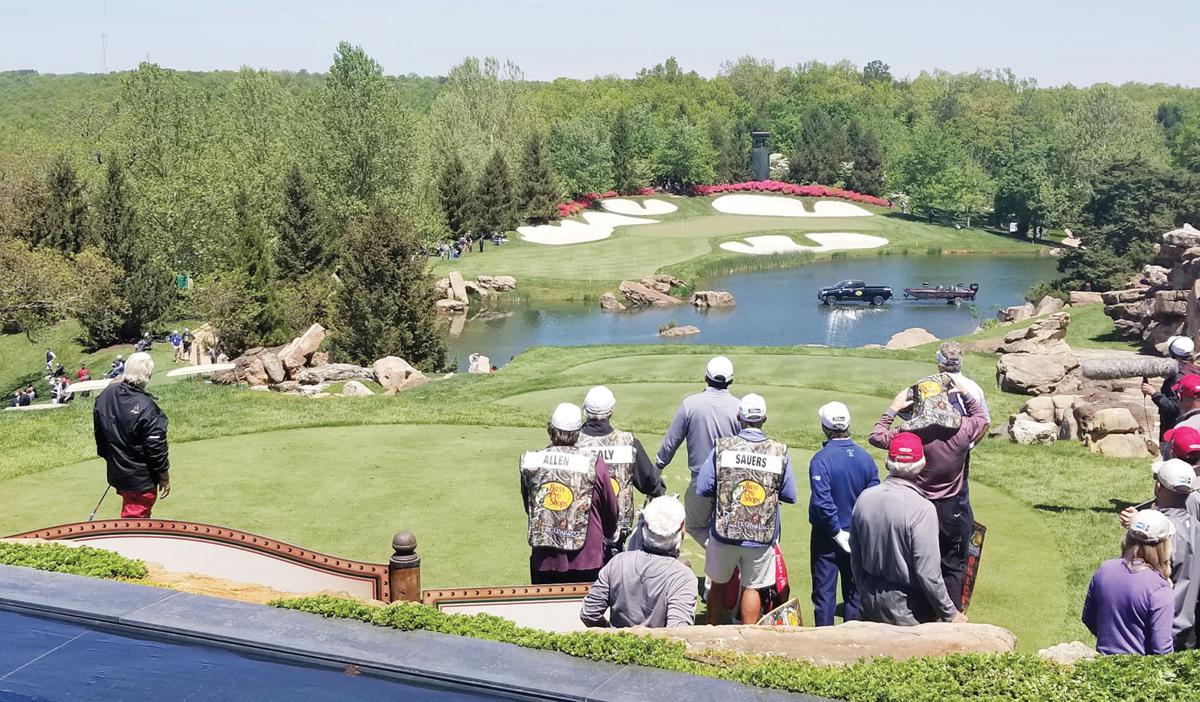 Fan favorite John Daly watches his tee shot on the fourth hole during a sun-splashed day at the Bass Pro Shops Legends of Golf. Big Cedar Lodge announced Oct. 18 that it will no longer host the tournament, which has been held at the resort annually since 2014. 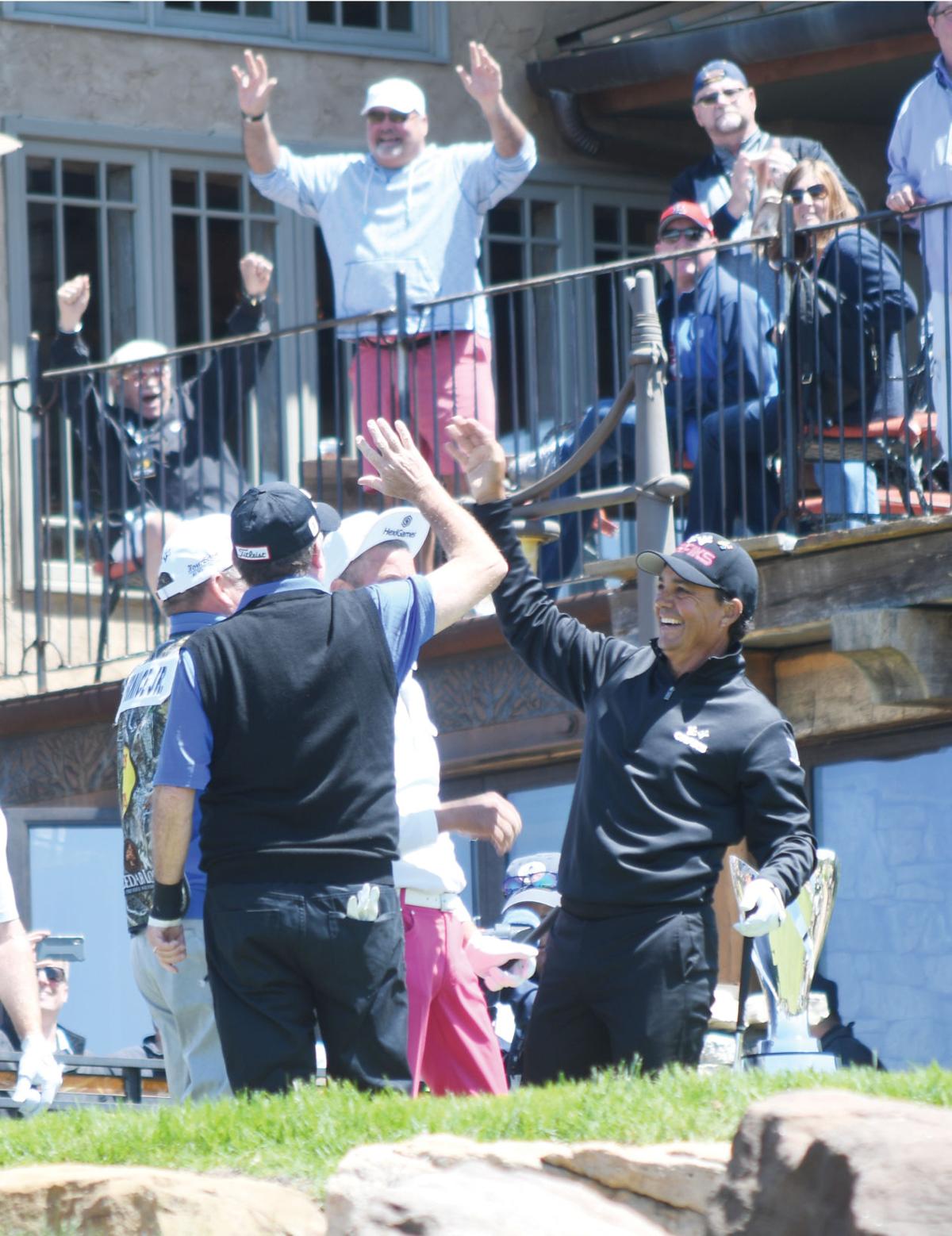 Tom Pernice, Jr., (right) celebrates with partner Scott Hoch after making a hole in one on the opening hole of the final round of the Legends of Golf tournament. 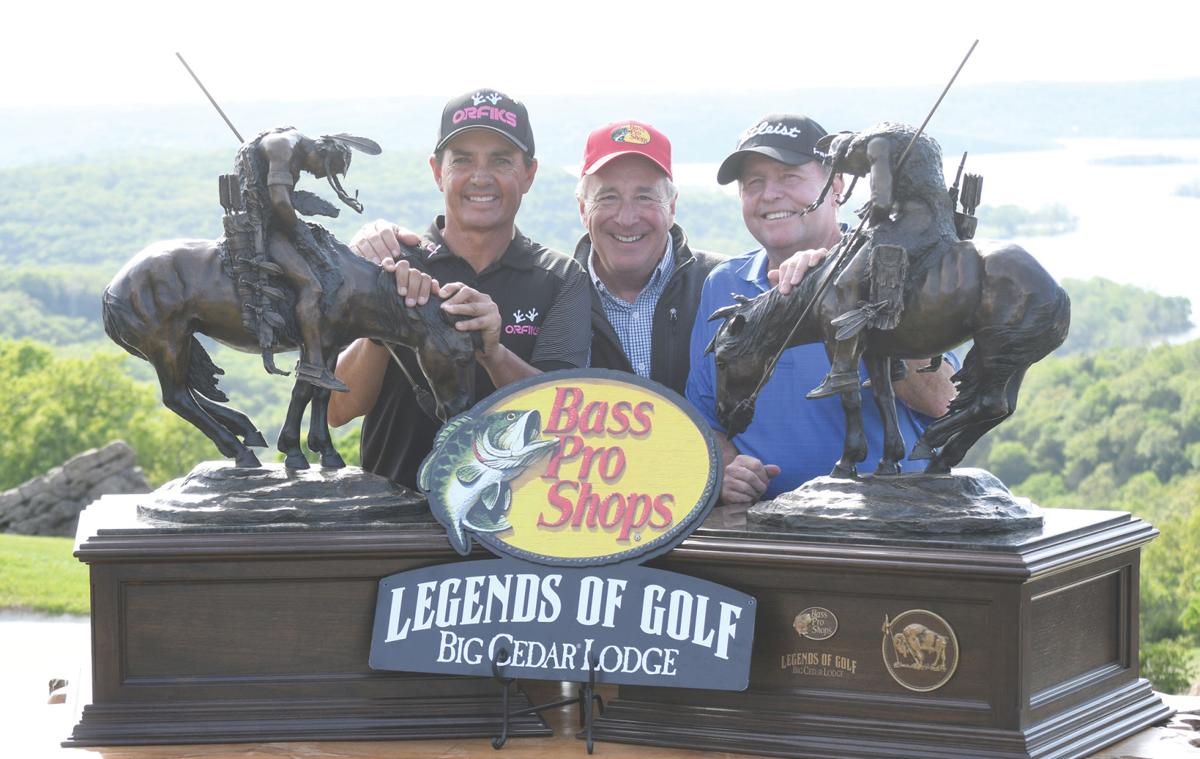 Fan favorite John Daly watches his tee shot on the fourth hole during a sun-splashed day at the Bass Pro Shops Legends of Golf. Big Cedar Lodge announced Oct. 18 that it will no longer host the tournament, which has been held at the resort annually since 2014.

Tom Pernice, Jr., (right) celebrates with partner Scott Hoch after making a hole in one on the opening hole of the final round of the Legends of Golf tournament.

Looking back over the six years of the Bass Pro Shops Legends of Golf at Big Cedar Lodge, it’s easy to play the comparison game.

It’s tempting to rank things like the golf experience for the most unique event on the PGA Tour Champions circuit, the list of golf legends in attendance, the celebrities who come to Top of the Rock for the weekend, and the memories made for the fans.

While tempting, it’s often difficult to size up the experience against other years since the event came to southwest Missouri for the 2014 tournament.

Ranking this year’s tournament against the others, though, wasn’t a tough call for Tournament Director Kirk Elmquist.

To say the 2019 Legends of Golf was the best of the six years the tournament has been hosted at Big Cedar Golf properties is “not a stretch at all,” Elmquist said during a recent visit.

“That’s a very public fact, that this was truly the best event that we’ve had, at Top of the Rock and Ozarks National.”

While he could not divulge the exact numbers, Elmquist said the crowds at the April tournament “blew away attendance records. … Thousands and thousands of increases over the records we set (in 2018).”

There were many different factors in play for the increase, but Elmquist is quick to point to the biggest reason – one that he has zero control over.

For the first time in the six years in the area, there were no tournament days impacted by rainy weather. There was rain during the pro-am rounds early in the week, but nothing for the three days of tournament play.

That seemed to make the interaction with the celebrities on hand more enjoyable for fans, the golf more dramatic and the experience a richer one.

“That’s part of the gumbo,” Elmquist said. “You get all those ingredients, but you have to add a little sunshine.

“When you add that sunshine, the fishing is better, the shooting is better and the golf scores look a little better.”

While attendance numbers weren’t available to be shared, there are some figures that showed the reach the tournament is continuing to build on a worldwide level.

There were 3 billion impressions on social media from all over the world, with 150 media outlets covering the tournament, stories written and shared on six continents and 3,000 stories posted online and appearing in print from tournament week.

A big factor in that had to be the additions to the weekend celebrity competition at Top of the Rock.

Justin Timberlake is a worldwide celebrity who has made a huge impression as a singer, songwriter, actor, dancer and record producer. He drew a passionate response from fans of all ages.

He was joined by returnees Mark Wahlberg, Kid Rock and Larry the Cable Guy, plus Paige Spiranac, a professional golfer and rising social media influencer.

That group was joined by golf legends Gary Player, Lee Trevino, Ben Crenshaw and others in a Legends Competition on Saturday at Top of the Rock, and a Celebrity Shootout on Sunday.

The late scratch of Legends of Golf regular Jack Nicklaus, who was ill and unable to make the trip, didn’t do anything to keep the crowds down for the weekend.

“That was another arm of people who were watching our tournament,” Elmquist said of the celebrities on hand. “Plus the 72 Champions players – it was just a tremendous, tremendous week.”

The week included the “official” opening of Ozarks National, the course down the road from Buffalo Ridge in Hollister, the product of the storied and respected Coore & Crenshaw design firm and lauded by fans and pro golfers alike.

The reaction to Ozarks National was largely unanimous, with pro players eager to see the property and play the course going into the week, then raving about the experience afterward.

“Global writers and guys who are great with the pen are learning what we all know,” Elmquist said. “Maybe they live in New York or live in L.A. and are a writer, or work for Golf Digest. And they are seeing it.

“That has been a very humbling experience, to listen to those great words. It’s very exciting.”

Crenshaw and partner Bill Coore met with the media on the Ozarks National patio before tournament play began, and it was easy to get the impression that the finished product even exceeded their expectations.

“We’re very proud of the final piece here,” Crenshaw said in a very matter-of-fact tone at the time.

They spoke fondly of the process of working with Bass Pro Shops founder and CEO Johnny Morris, who brought them in some three years ago to develop the raw property in Hollister into what many are predicting to be a top-100 course in the U.S.

“He gave them license to do their magic,” Elmquist said. “John is always going to make it the best possible, like the facilities that are on the course – that’s John. The view area, the treelines and the framing of the holes, and all that, they collaborated together on all that, and it makes a huge difference when you have a guy in your corner who is in full support of what you’re doing.

Ozarks National is certain to play a prominent role in future Legends of Golf events, and Top of the Rock is a mainstay to remain.

Playing part of the unique two-player team format at the par-3 Top of the Rock is a big draw for players as well as fans eager to soak up the scenery of the layout overlooking Table Rock Lake.

What is yet to be determined is the role of the newest Big Cedar Golf offering, the under-construction Payne’s Valley course. That course is a work-in-progress, with the design firm headed by Tiger Woods overseeing that process.

Payne’s Valley was expected to open sometime in 2019, but wet conditions last fall and this spring led to the full opening being pushed back to 2020.

Elmquist said there are 12 or 13 holes completed, but there is no concrete timeline for when it will be completed – and if it will be ready for next year’s Legends event.

Elmquist said virtually all ideas are on the table and up for discussion as to the format of future tournaments.

“It’s fun to always have good, fresh ideas at the tournament, and we are talking and planning for those right now,” he said. “We’d like to see more play at Ozarks National and get more exposure to those golf courses that are being built out there. But you can guarantee it will be fun.

“I’ve worked at other places, and it’s so refreshing to work at a place where creativity is honored. It’s very refreshing.”

What also is refreshing for Elmquist is working with Morris, and his vision and willingness to push the boundaries for making the week better for all involved.

“I don’t know if the word ‘can’t’ is in his vocabulary,” Elmquist said with a laugh. “I believe there’s a hope and a vision and a caring for every guest that comes our way.

“‘How can they have a better experience?’ is really what I’ve learned.”

This year’s tournament saw the final round start off with a memorable experience for the eventual winning team of Scott Hoch and Tom Pernice Jr.

Hoch and Pernice entered the final round with a three-shot lead, and Pernice’s tee ball on the opening hole was perfection. It bounced twice and rolled into the hole for an ace, earning Pernice a new Tracker ATV and sending them to an eventual five-shot victory.

Hoch and Pernice each collected $171,000 first-place checks out of the $1.8 million purse, ending a week that began with a pro-am appearance by big-league baseball great Roger Clemens and sent fans and pros home happy.

“People were blown away by the level of golf course that is right there, and giving us their personal ratings and where they saw it on the top 100 lists in the United States, and those kinds of things,” Elmquist said. “Those are wonderful compliments, for Johnny Morris and the Big Cedar Golf model.”

One thing not up for consideration is the length of the tournament. In 2018, the tournament was a four-day event, with play at Buffalo Ridge, the Mountain Top course and Top of the Rock.

“We won’t do that again,” Elmquist said. “It will stay a three-day tournament. The only question will be where and how and the format and fun and energy and celebrity and legends and champion players.

“It’s so refreshing to see fun ideas like that come to fruition.”

The official PGA Tour Champions schedule has not been released for 2020, but the Legends of Golf is expected to be on the same weekend in the schedule – two weeks after the Masters, with April 24-26 for the tournament days.

Even with the tournament some nine months away, Elmquist is still steadily working on plans, ideas and celebrities to attract to the Branson area for 2020.

“We have great friendships and we will be announcing that soon,” he said. “We have some great fan favorites who want to come back and we will issue those invitations and get that out as soon as possible.”