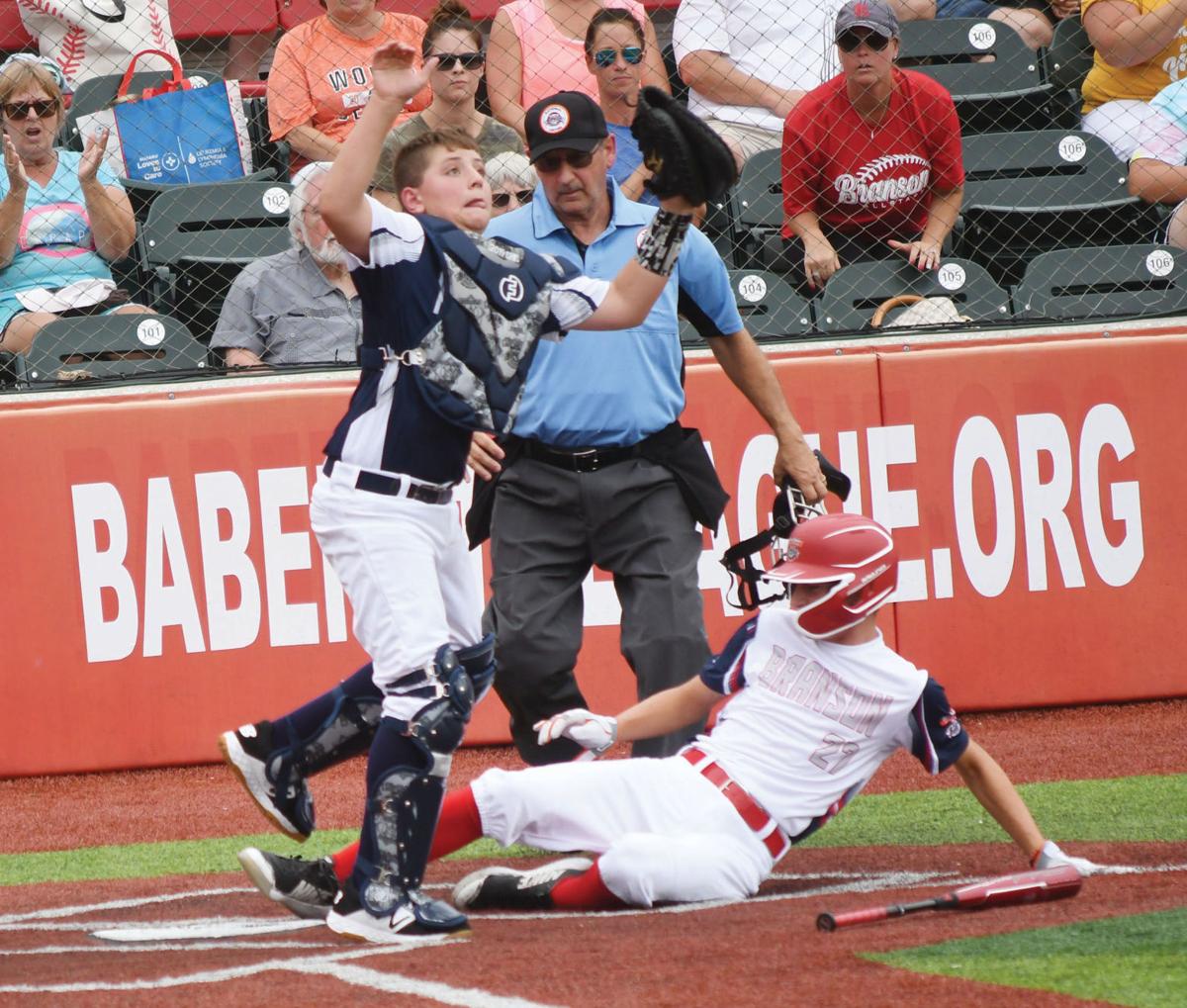 Branson’s Conner Rogers slides into home with his team’s only run of the game in a 3-1 loss to Pennsylvania in Saturday afternoon’s action at the Ballparks of America. 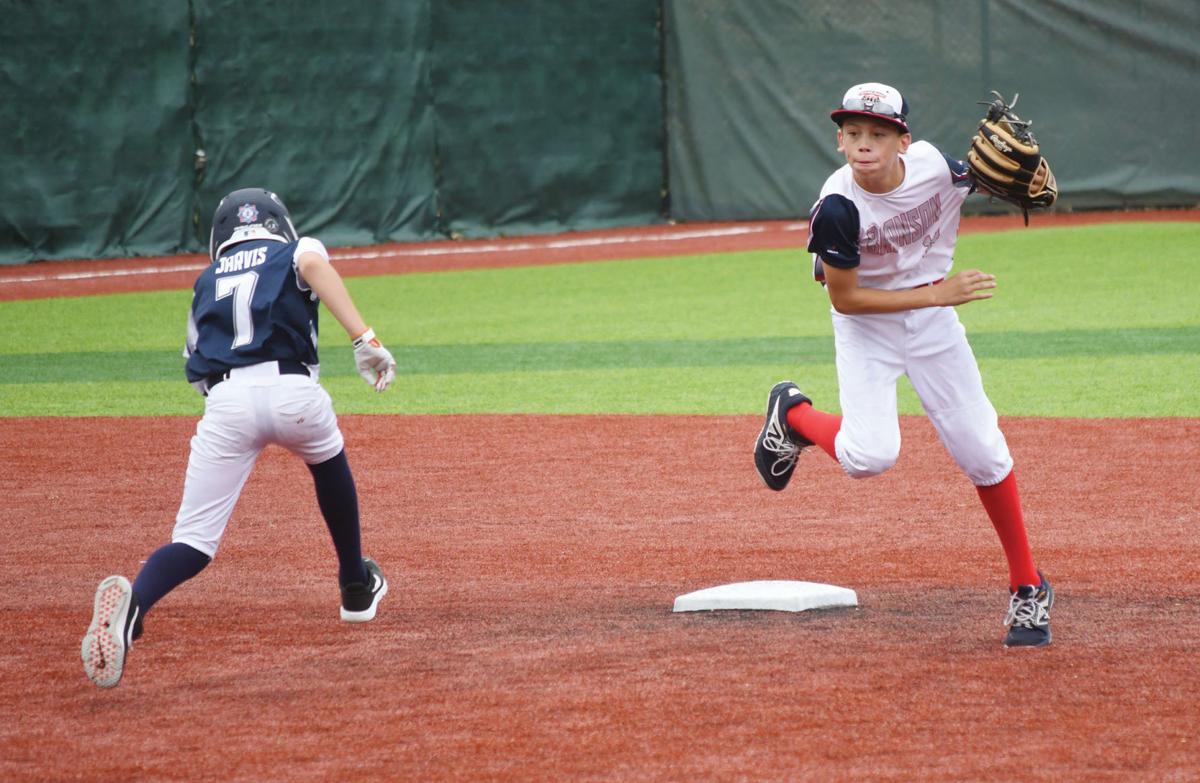 Branson shortstop Caeden Cloud (right) throws to first base after recording a forceout at second base during the second inning of Saturday’s game at the St. Louis Field.

The Branson (right) and Pennsylvania teams line up on the basepaths for the national anthem before Saturday afternoon’s pool-play game.

Branson’s Conner Rogers slides into home with his team’s only run of the game in a 3-1 loss to Pennsylvania in Saturday afternoon’s action at the Ballparks of America.

Branson shortstop Caeden Cloud (right) throws to first base after recording a forceout at second base during the second inning of Saturday’s game at the St. Louis Field.

The Branson (right) and Pennsylvania teams line up on the basepaths for the national anthem before Saturday afternoon’s pool-play game.

A team from Branson was granted an automatic berth into this year’s Cal Ripken Major/70 World Series at Ballparks of America.

The area all-star team joined 19 of the top baseball teams of 12-year-old players from across the country – plus nine international teams – at the nine-day tournament that will crown champions from the U.S. and the world on Saturday.

If there was any doubt going in about whether the Branson team would be able to hold its own in the prestigious competition, there isn’t any now.

Branson shrugged off some weather complications in its first game and a lackluster loss in its first completed game to win two of its first three games.

Following Sunday’s play, Branson is 2-1 in Pool D of the U.S. field, one game behind the team from Flood City, Pennsylvania, and in good shape for the start of bracket play on Wednesday.

“They’re ready for it,” Branson coach Nick Schafer said on Saturday. “Some of them have played together, but for the most part they are on other teams playing against each other. I’d go to battle with any of the 15.

“I’m looking forward to seeing who is going to step up. It seems like it’s always somebody new. We played just a handful of tuneup games, and everybody stepped up at some point or another and had their time.”

Branson’s game on the opening night of the tournament on Friday was ended up water-logged and delayed to Saturday night.

A steady and persistent rain delayed the start of the game against Ohio Valley (Newburgh, Indiana), and the game was finally called with Branson trailing 1-0 in the fifth inning.

When the game picked back up on Saturday night, Branson answered the bell, scoring two fifth-inning runs while keeping Ohio Valley’s bats in check, for a 2-1 victory.

Hudson Roberts opened the fifth with a single and Parker Elliot reached on a dropped third strike. The runners advanced on a groundout, then Roberts scored on a passed ball.

Branson reliever Braiden LaMontagne retired Ohio Valley in order in the sixth inning, two of the outs coming on strikeouts.

That victory split over two days became even more vital for Branson’s bracket-play positioning because of what happened earlier Saturday, when Branson dropped a 3-1 game to Ohio Valley.

Branson came out of the gate quickly, with Conner Rogers walking to lead off the game, then stealing second base, going to third on a sacrifice and soring when Garrett Cook scored on an error.

That gave the host squad a 1-0 lead, but it was about all of the offense it would muster.

Braxton Gross belted a one-out double in the second and Rogers added a one-out single in the third, but both were stranded by Pennsylvania starter Justin Wysong.

Wysong retired 14 of the final 17 hitters he faced, giving up only the two hits and hitting a batter.

Pennsylvania took advantage of some wildness by the Branson starter to take the lead. Two walks and three hit-batters, plus a pair of timely hits, allowed Pennsylvania to score one run in the first and two in the second.

The damage could have been worse, but Branson turned an inning-ending double play with the bases loaded in the first, then picked a runner off first base to end the second.

Elliot helped keep Branson in the game, coming on in relief and working the final three innings. Elliot issued a leadoff walk in the third, then retired the final nine hitters he faced, striking out three.

“Parker Elliot was not in the starting lineup,” Schafer said. “You’ve got 15 kids and only 10 are playing. He could have sat in the corner and pouted, but he put his big-boy pants on and he shut them down.

“He gave us a chance, and you can’t ask for anything other than that.”

Schafer downplayed the distraction of having his team’s opening game being split into two parts, with a late and rainy night, as having an impact on the Pennsylvania game.

“That’s an excuse, and we don’t make excuses,” Schafer said. “They were just the better team today, and I’d love to have the chance to play them again.”

One bright spot for Branson was the play of leadoff hitter Conner Rogers, who had a hit, reached base twice and scored the team’s only run.

“I’m starting to get back in the groove of things,” Rogers said. “I was in a slump for a little bit.

“We’re starting to gel together. We just need to get the bats rolling and we’ll be good.”

Rogers admitted to wondering how his team would stack up against some of the best Babe Ruth League teams in the U.S. and internationally.

“I was a little curious, to see how good these other teams would be and how we would compete,” he said.

“This is a great experience, a once-in-a-lifetime opportunity.”

Branson flexed its muscle in Sunday’s pool-play game, a 13-4 victory over Oregon.

Branson pounded out 17 hits, with Wyatt Vincent going 4-for-4 from the leadoff position, scoring four runs, adding a triple and home run and driving in two runs.

Branson took control early and never trailed, scoring one first-inning run and adding two in the second to take a 3-0 lead. Three fourth-inning runs made it a 6-0 game, and after Oregon scored four in the home half of the fourth to make it a 6-4 game, Branson put the game away in the late innings.

Branson scored two in the fifth and added five more in the sixth to end any thoughts of an Oregon comeback.

Branson was scheduled to be off on Tuesday before the start of bracket play on Wednesday. The tournament continues through the championship round on Saturday, with games at 9 a.m. and 3 p.m.

B72: Pool E International seventh place vs. Winner B59, 10 a.m. at Chicago Field