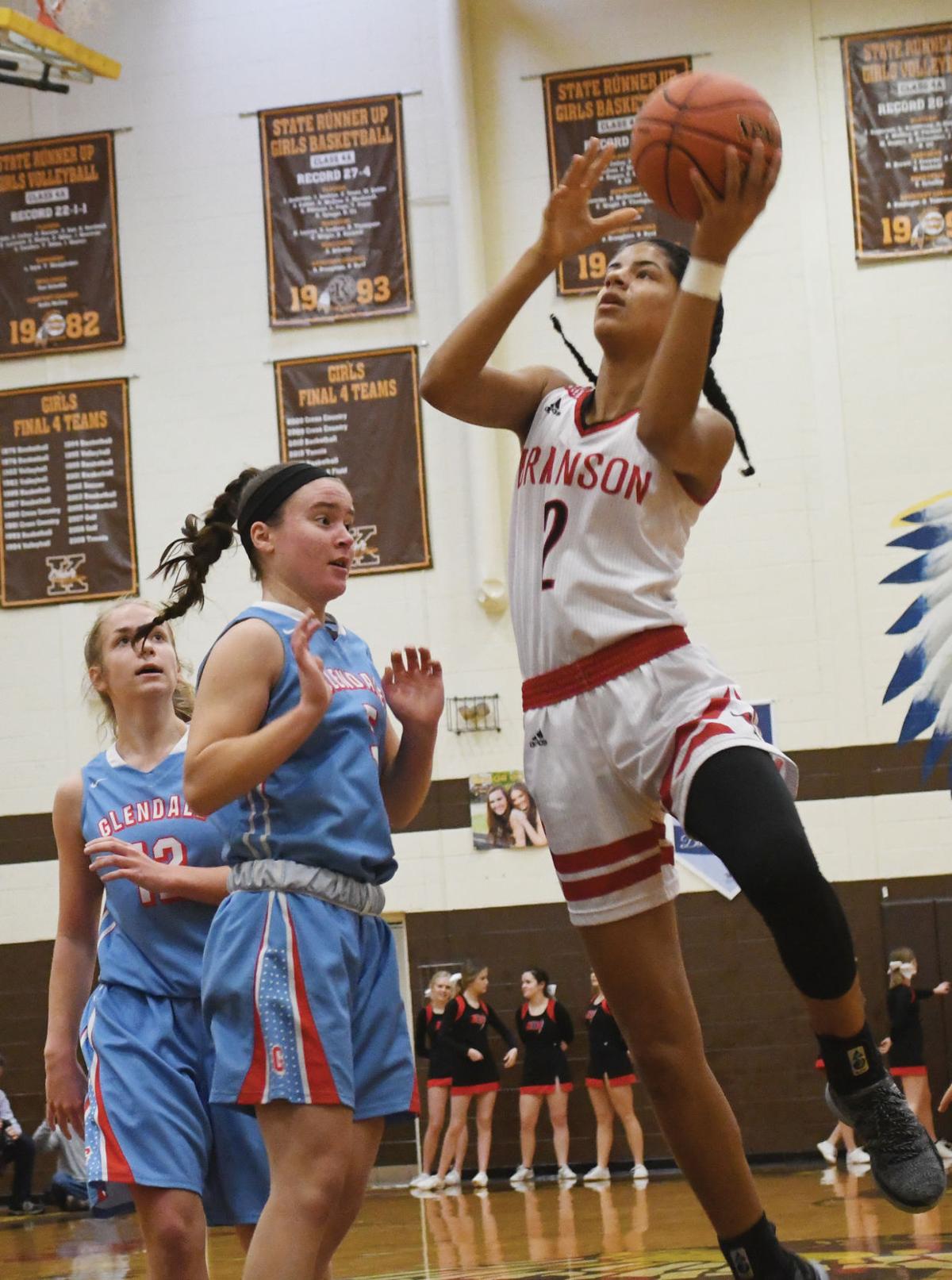 Branson junior Priscilla Williams has shown a consistent ability to score both from the outside and on a wide array of acrobatic drives to the basket. 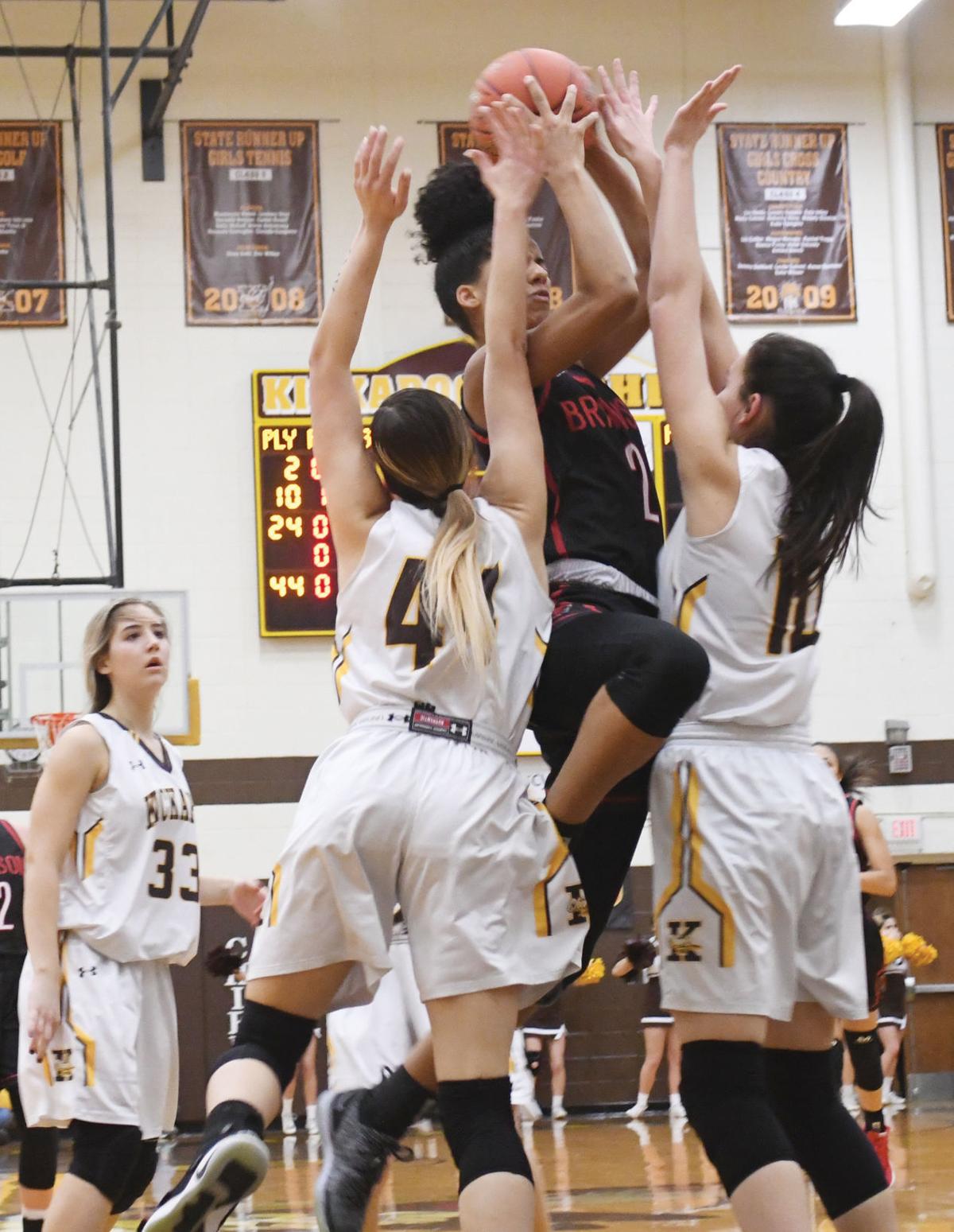 Being the focal point of opposing defenses — and so-called “junk” defenses — has become a way of life for Branson High School junior Priscilla Williams. 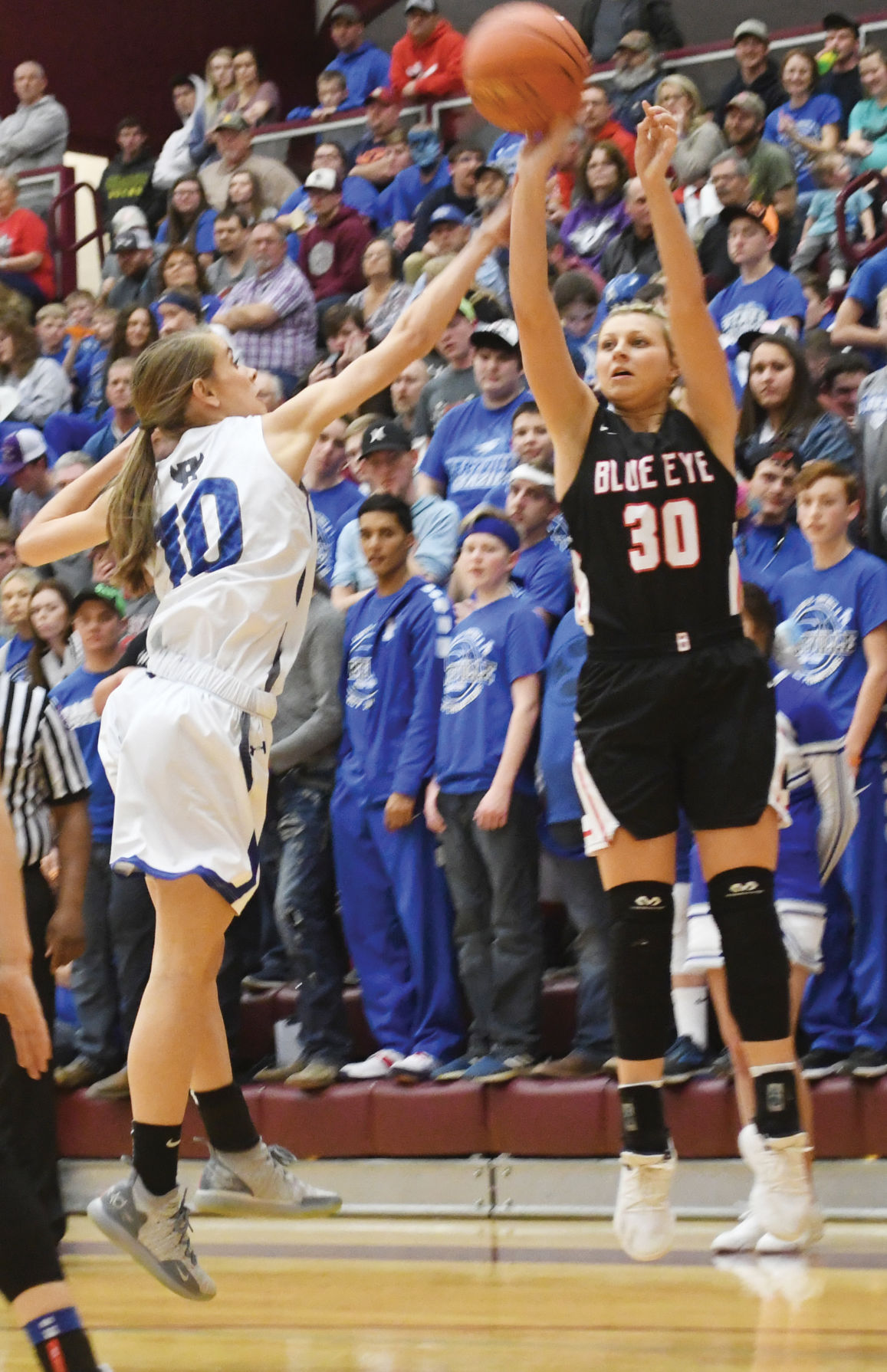 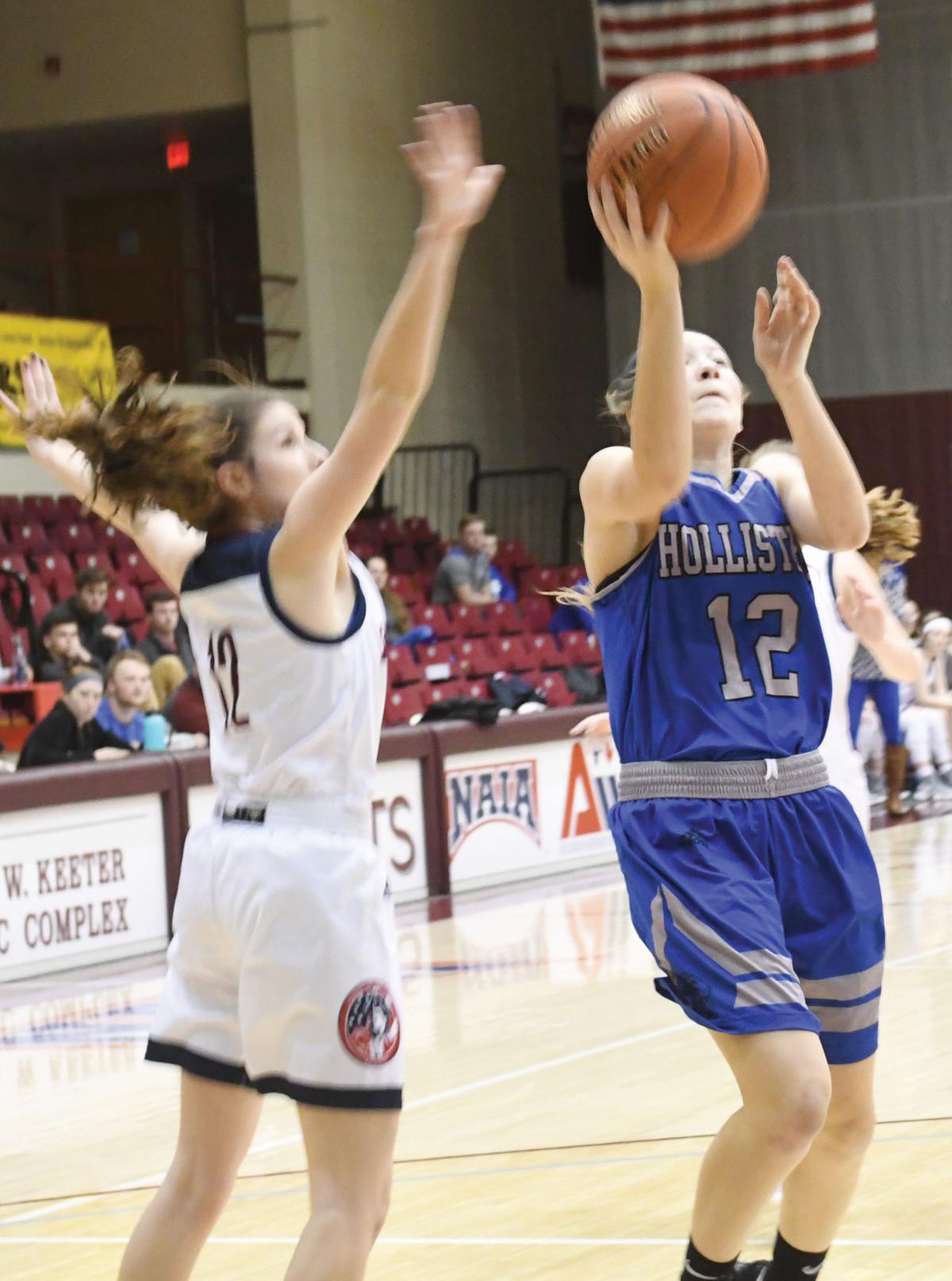 Branson junior Priscilla Williams has shown a consistent ability to score both from the outside and on a wide array of acrobatic drives to the basket.

Being the focal point of opposing defenses — and so-called “junk” defenses — has become a way of life for Branson High School junior Priscilla Williams.

If you find yourself at a Branson High School girls’ basketball game, sometime after the end of the JV game, you’ll likely hear some rumblings from the crowd, along the lines of, “That’s her.”

“Her” in that case is clearly Priscilla Williams, the 6-foot-3 junior who usually towers over all other players on the court.

Whether it’s when she’s draining 3-pointers from deep behind the arc in warmups, or dribbling a basketball with each hand while looking away, it doesn’t take long for most to realize such a skill set is rare in the high school game.

It then continues once the game starts, when Williams wins the opening tip, can shoot from the outside, post up any opponent and can take over a game on the defensive end.

It’s that skill set, and that all-around dominant performance during her junior season, that has earned Williams honors as the Tri-Lakes Player of the Year.

Even in an area that is so strong and has such a rich history in girls’ high school basketball, Williams is a rare talent.

“She’s virtually unstoppable in the open court,” Branson coach Kip Bough said. “I don’t know that I can recall anybody who has been able to score like she has.

“We’ve not really seen a kid do, points-wise, what she is capable of doing.”

There are a couple of ways to get the full effect of what Williams can do and the talent she possesses.

First, you can watch her play on a consistent basis. She is 6-foot-3 with a huge wingspan, is quick, fast and has a high basketball IQ. Put her at the top of a 1-3-1 zone defense, and she can effectively cut off one side of the floor as opponents are too intimidated to try and pass over her.

Put her down low, and she can take away all semblance of an opponents’ low-post game, grabbing rebounds by the bushel.

And on offense, put the ball in her hands at the top of the key and she can hurt you with her 3-point shooting or her uncanny ability to get to the basket, for layups and/or fouls.

It’s also easy to tell how talented she is by looking at the stats.

As a junior for the Lady Pirates, she averaged 27.8 points and 10.1 rebounds per game, making 52 shots from 3-point range and finishing with 39 steals and 77 blocked shots.

Her season included a school-record 51 points in a loss to Camdenton in the Bolivar Tournament, and she passed the 1,000-point mark for her Branson career shortly after the midpoint of the season.

Considering she played a hair over half of her sophomore season before leaving the team and school following a disciplinary incident, it means she reached 1,000 in barely over a full season.

Even more impressive is the fact that she has seen every innovative (and simple, for that matter) defensive approach against her.

Box-and-one defenses, triangle-and-two defenses, with opponents playing off her and daring her to shoot from the perimeter, and physical play … none of it seems to work on a consistent basis.

“For her to score like she does – the stats speak for themselves,” Branson coach Kip Bough said.

It all has led college recruiters from some of the top national women’s basketball powerhouses to find their way to Branson.

Williams had made a name for herself while in Katy, Texas, playing through her freshman season for Seven Lakes High School outside of Houston. She collected her first scholarship offer – from the University of Houston – before playing her first high school game.

ESPN’s HoopGurlz has Williams ranked as the No. 16 recruit nationally for the Class of 2020, with a grade of 96 (out of 100). She is their top-ranked recruit in all of Missouri.

The Website prospectsnation.com has Williams ranked as the No. 8 player nationally in the Class of 2020.

There has been a steady stream of coaches, assistants and recruiters visiting Branson High School, to watch Williams play in games, to see her practice, and to talk to Bough about his talented guard.

Ask Williams about the recruiting process, and you get the idea it isn’t intimidating to her in the least. She said she can’t put an accurate number on the amount of offers she has in hand, but said it is more than 50.

She expects to announce a list of five finalists in May, and she will take visits to all five. The goal is to commit before the start of her senior year at Branson.

Perhaps most impressive is what Williams has done on a Branson team that is young, untested and inexperienced at the varsity level.

There were bumps in the road during her junior season, but she led the way as Branson compiled a 15-12 overall record, 5-4 in the rugged Central Ozark Conference, ending in a loss to eventual Class 5 state quarterfinalist Springfield Kickapoo.

That growth as a team is what Williams talked about first when talking about the season.

“That’s a big pride thing for us,” Williams said. “(Bough) is always had a winning program, so to keep that up and keep that legacy going is huge.

“He always tells us that we’re the best of the best, and we just need to live up to our standards.”

About those rumblings from opposing players and fans – and even players who try to take her out of the game – she yielded a quick laugh as she says it doesn’t bother her.

At the Pink and White Lady Classic, there were fans in the stands who yelled at her to pass the ball, to get her teammates involved, to stop shooting so much.

Williams says it doesn’t affect her … in a bad way, at least.

“It definitely motivates me,” she said. “It’s like half and half – I try not to listen to it, but for the most part, I can’t really hear people in the stands. … You try to blur the crowd out so you can really focus on the game.

“It makes me hungry, to see what I can do with this on me.”

Bough said he can’t imagine how having so many people – opponents, fans and high-level college recruiters – put their focus on a 17-year-old high school junior can’t be enough to wear anyone.

But he quickly adds that he’s seen a difference in Williams from when she first arrived on the Branson campus to now.

“I know it has to be somewhat of a burden, those expectations,” Bough said. “What kid would not have that? Is she mentally strong? She’s getting there, she’s getting tougher. When she talked about not hearing what people say – last year, she heard them. She’d respond, she’d do something. If there were kids on the court doing something, she’d react to it. This year, she didn’t. It didn’t seem to faze her.

After leaving the team and the school early during her sophomore season, Williams came back to school this fall, and after serving a punishment and regaining her eligibility, she returned to the team and showcased a newfound unselfish play.

At times, she went over the top in her determination to get her teammates involved and help accelerate the growing process for the young players.

It carried over to the season, and Bough recalls a game against Camdenton at the Bolivar tournament, when she scored all 10 of Branson’s points in the first quarter, but the rest of the team struggled.

Camdenton led by as many as 16 points in the opening quarter.

“There was a timeout, or maybe at the end of the quarter, and I just looked at her and said, ‘You’ve passed enough. We get it, you’re unselfish, now it’s just time for you to take over,’ ” Bough said.

The result? Branson lost, but Williams set a single-game school record with 51 points.

Another episode of her unselfish nature came in the district tournament opener against Springfield Glendale. Williams had two players shadowing her every move, so for long periods of the first half, she set up camp out by the half-court line, without the ball, and two defenders next to her.

She was willing to take up the attention of two defenders and let her teammates play four-on-three. She still ended up with 42 points, sealing Branson’s victory at the free-throw line.

This season has been one where Williams has displayed her improved maturity.

She regularly admits it, and when you ask Bough about the change in player and person from when Williams first stepped on the court for Branson as a sophomore to now, he can’t help but let out a little chuckle.

“She is leaps and bounds from where she was at,” Bough said. “She has really grown, and honestly, that’s really what I’m most proud of, is where she’s at as a person and as a teammate. She has really, really grown.”

The growth has continued from just the start of her junior season until the end, he said.

“I would say that she was coachable but hard to coach (when she first arrived as a sophomore),” Bough said. “Then this year, it was a little bit (of growth), but 10 times better, at the start of this season.

The scary part for opponents? Bough thinks there are areas in which Williams can get better. Things like moving without the ball, passing and cutting, and working on her post-up and low-post game.

From her perspective, Williams is clearly grateful to get a second chance at Branson High School.

“It was a big deal for me to finish this season, all the way this year,” Williams said. “Just from learning from mistakes I’ve made in the past and seeing how I’ve changed, I knew I didn’t want a repeat of what happened. I was given this second chance and I am so grateful for that. To see all the people who helped you through that, those are the people who are really looking out for you.

“Taking advantage of the second chance and not reliving the past was really important to me.”