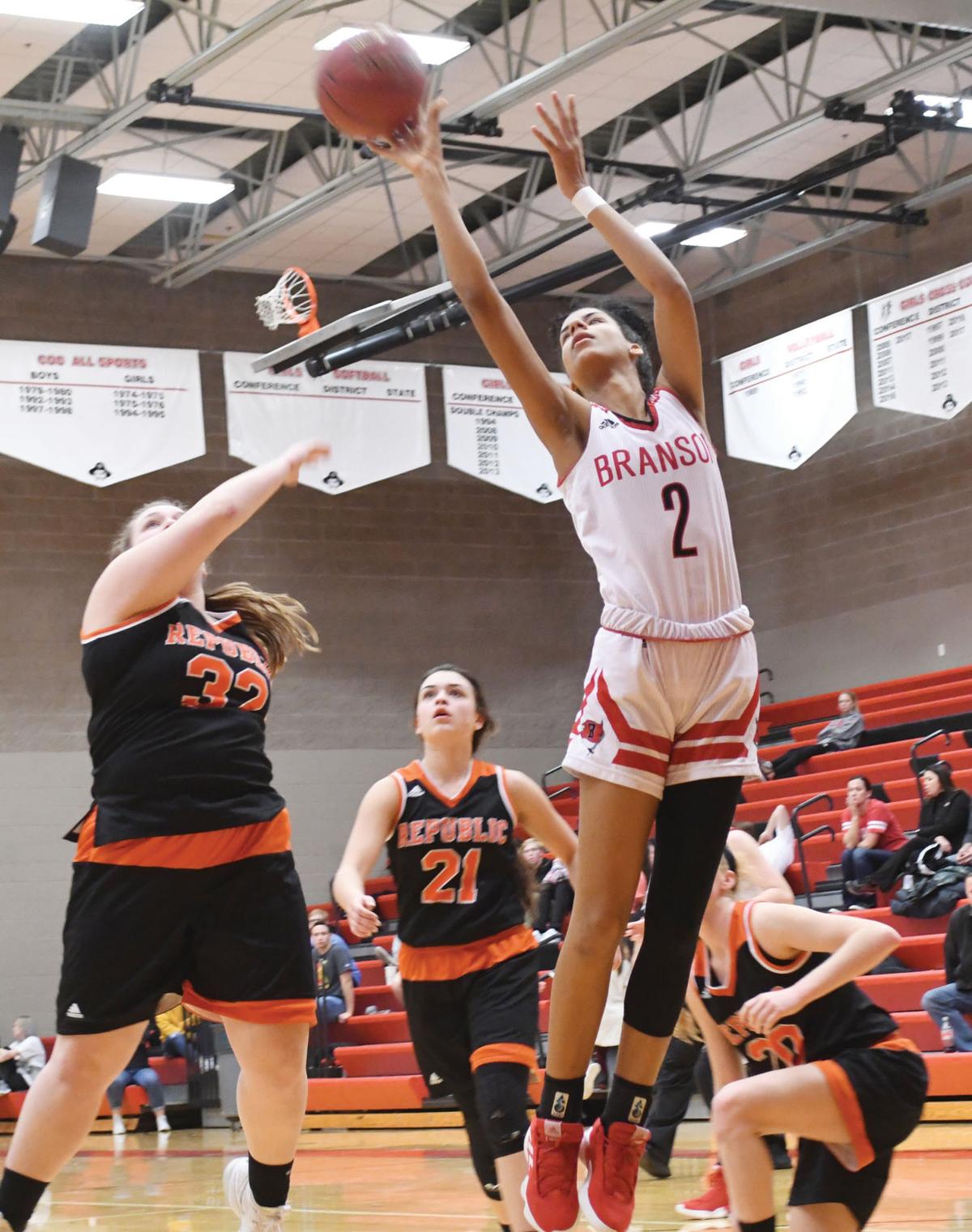 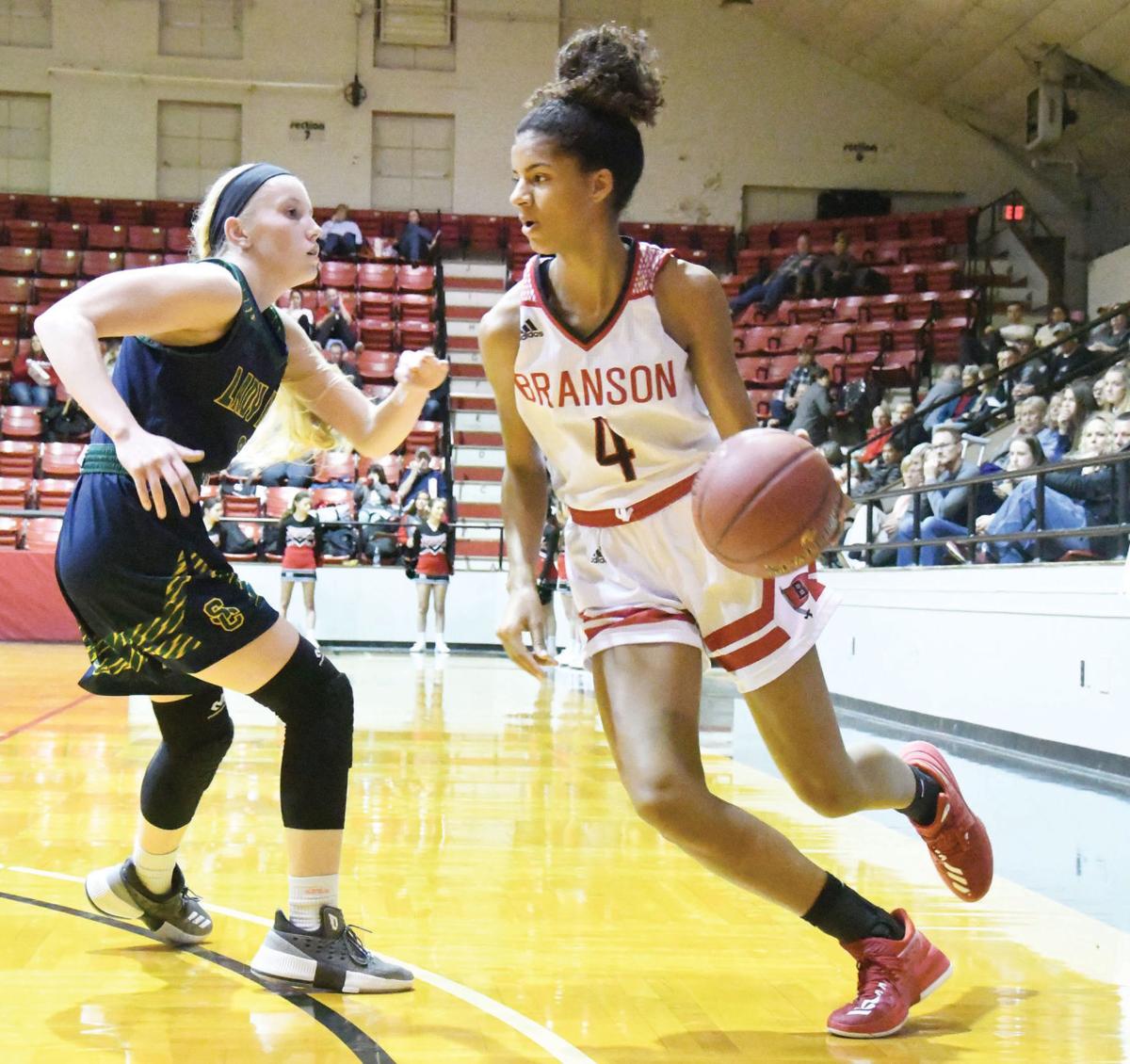 Priscilla Williams (2) is ranked as the No. 12 recruit in the Class of 2020 by ESPN, is the No. 3-ranked guard and the top player in the state of Missouri.

Priscilla Williams (2) is ranked as the No. 12 recruit in the Class of 2020 by ESPN, is the No. 3-ranked guard and the top player in the state of Missouri.

The list of college suitors for Priscilla Williams is down to the final five.

The Branson High School girls’ basketball sensation – the 6-foot-3 guard is ranked No. 12 nationally by ESPN, No. 3 among guards and is the top-ranked recruit in the state from the Class of 2020 – announced her finalists on Twitter on Sunday afternoon.

Williams is down to Florida State, Louisville, Syracuse, Mississippi State and Southern Methodist.

She expanded on the reasoning for her decision in a phone interview later Sunday.

“It was a really long process,” she said. “Our AAU (season) ended, and I did a lot of praying and thinking, and talking about it with my parents. I narrowed down my list from there, just based on the coaches and the schools.

“I will be taking my official visits to those five schools and make my decision from there.”

ESPN.com has Williams a five-star player with a grade of 98. The only players ranked higher in the Class of 2020 who have committed are individuals headed to Connecticut, Stanford, Baylor and Oregon.

Williams took a couple of unofficial visits over the summer during her AAU travels playing with the Missouri Phenom team, which finished 13th at Nike Nationals in July, to Minnesota and Missouri.

Neither made her final five.

“It was between about 10 schools, and I had it in my mind what I wanted, so that cut it down to about eight,” Williams said. “It was hard getting it down to five, but I feel very confident in my list now.

“It all kind of just fell into place.”

Williams said all of her final five schools are on the same level now, and no school should be viewed as being “in the lead” for her services.

She expects the on-campus visits – all five have been scheduled – to give her more guidance about the final decision.

“I think the visits are the most important thing,” she said. “I’m going to take all five of my visits, which not all people do.

“I think if you take all five, you get to spend time with the players and see how you interact with the coaches. You get the whole experience and get a feel for what is the right school.”

In fact, Williams said the time spent with players, on campus and when classes are in session, will be the most valuable time when deciding where her future lies.

“For sure, the players will probably be the biggest thing,” she said. “Just interacting with them and seeing their advice. The players are always going to tell you what it’s like. You won’t always be around the coaches, so the players are the ones you want turn to for advice.

“I’ve been told to make sure you interact with the players and that will help tell you if it’s where you want to be.”

Williams credited her family with helping give her guidance and advice throughout the recruiting process. There’s plenty of history there, too, with her mother (Kansas State) and father (Arkansas Tech) each playing basketball on the college level, and older siblings playing basketball and volleyball in college.

“They’ve helped a lot,” she said. “They all kind of know the recruiting process and have been through it. Their advice has been really helpful, because they’re older and they know the game and process very well.

“They take into account my criteria and just roll with it.”

Williams said her final official visit is scheduled for the weekend of Oct. 13, and she is hoping to make her announcement in November, before Branson’s season begins.

Williams came to Branson before her sophomore season, moving in with a ton of fanfare from Katy, Texas, in the Houston area. She held a scholarship offer from the University of Houston before she played a single varsity game.

After she left school midway through her sophomore season at Branson, she returned for her junior season and put up some ridiculous moments, showing the ability to take over a game on either end of the floor.

Williams reached the 1,000-point mark in barely a full season playing at Branson, finishing her junior season with averages of 27.8 points and 10.1 rebounds per game, making 52 shots from 3-point range and adding 39 steals and 77 blocked shots.

Her most recent evaluation on the ESPN.com site came from the Boo Williams Invitational in April. It says: “Versatile prospect with superior size in the back court; dynamic scorer from deep, manufactures shots, pulls up and fires in mid-range game; drives and delivers in traffic; impact guard in the class of 2020.”

The finalists for Williams include some marquee programs on a national level.

Louisville has made nine consecutive NCAA Tournament trips, went to the Final Four in 2018 and is coming off a season with a 32-4 finish, an Atlantic Coast Conference regular-season championship and an Elite Eight appearance.

Florida State has made seven consecutive NCAA Tournament appearances, reached the Elite Eight in both 2015 and 2017, went 24-9 last season and has won 20 or more games in each of the last seven seasons.

Syracuse is coming off a 25-9 campaign, where it reached the NCAAs for the seventh season in a row. The Orange reached the national championship game in 2016, losing to Connecticut in the finals.

Mississippi State won Southeastern Conference regular-season titles in 2018 and 2019, won the league tournament in 2019 and reached the NCAA title game in 2017 and 2018, losing to South Carolina and Notre Dame, respectively. The Bulldogs went 33-3 last season and reached the Elite Eight each of the last three years.

Southern Methodist is coming off a 13-18 season and seventh-place finish in the American Athletic Conference.

The Mustangs last reached the NCAA Tournament in 2008.