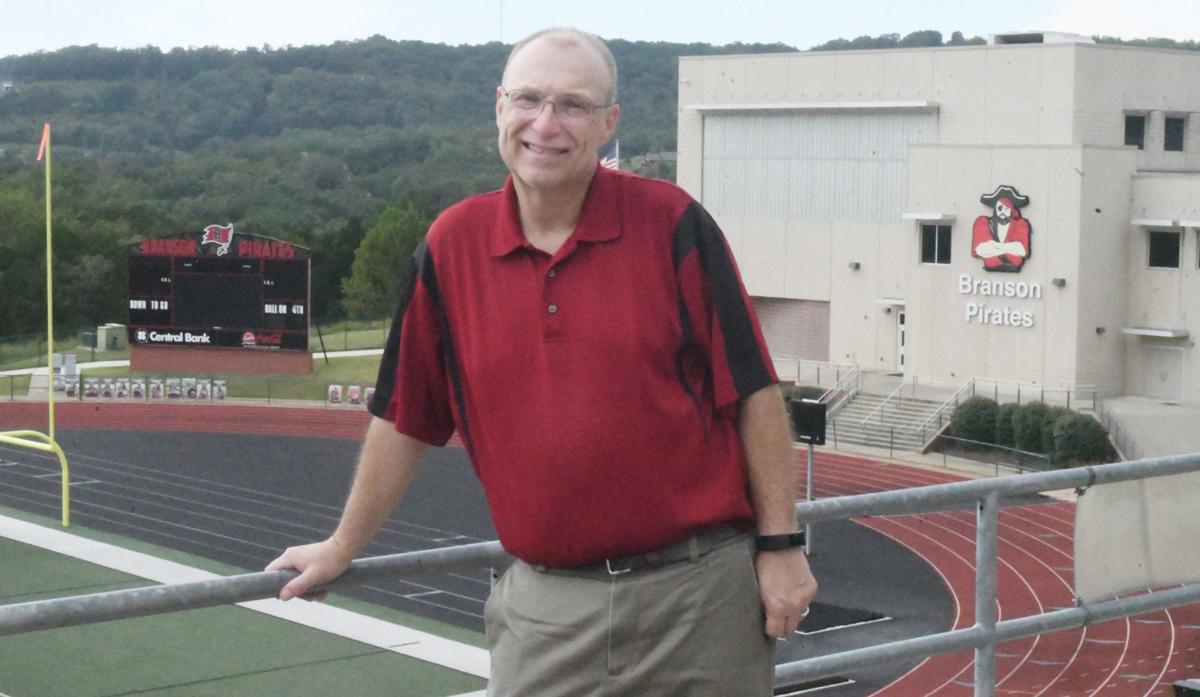 From Week 1 of the 1990 season to the present, Scott McCaulley has had a constant presence with the Branson High School football program, calling more than 300 consecutive games. 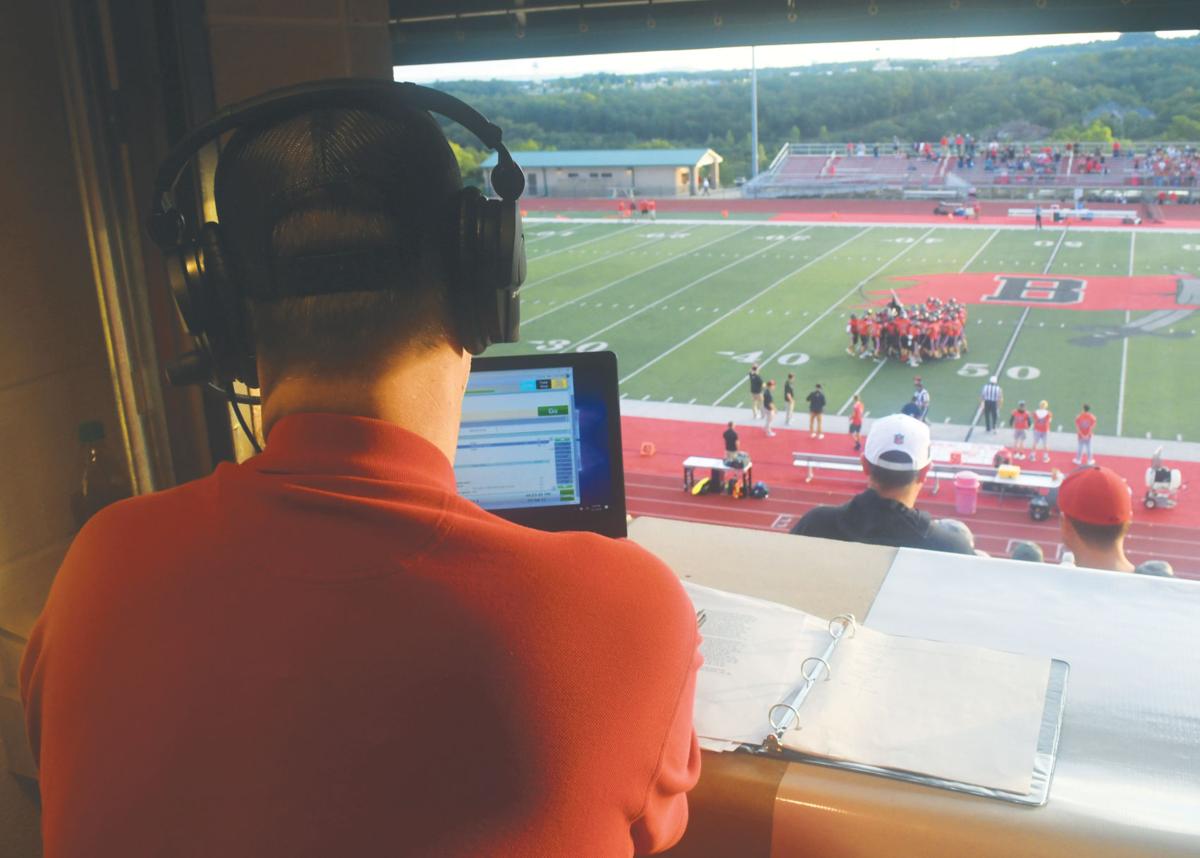 For the last 315 games for the Branson High School football program, Scott McCaulley has posted up in the press box and brought the action to fans glued to their radios. 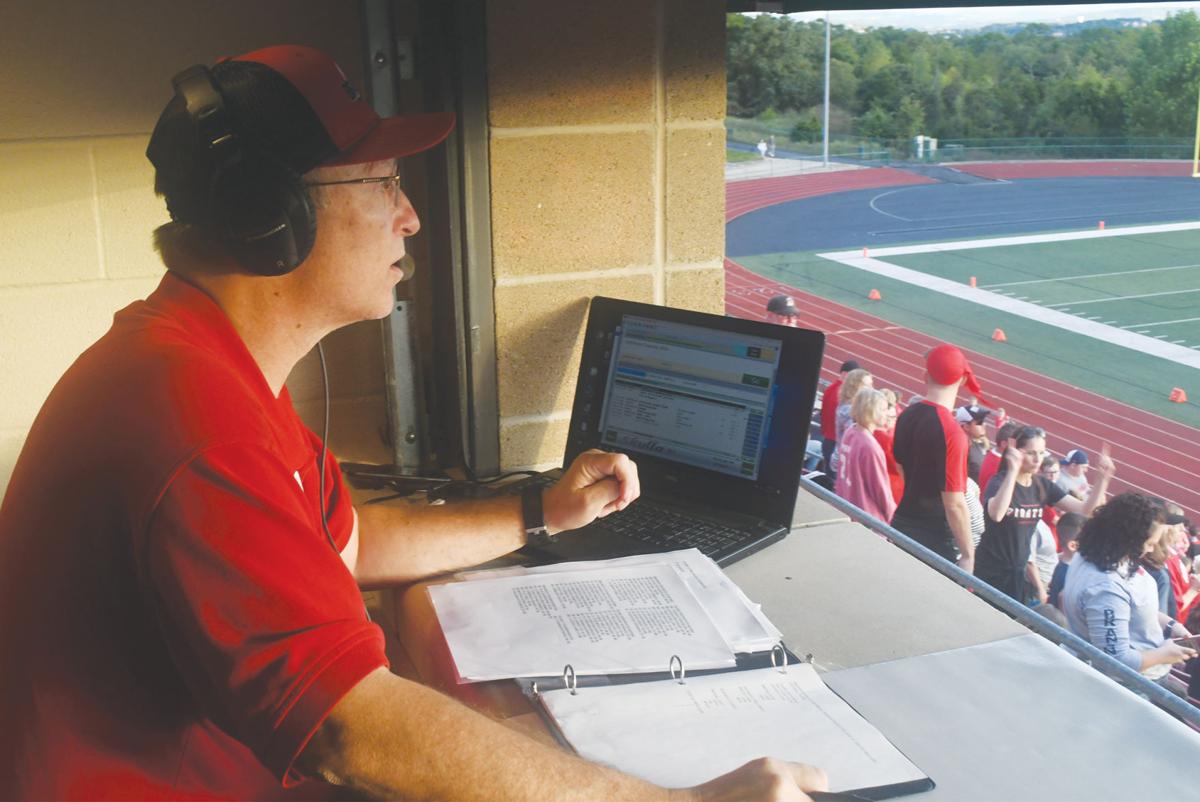 A Friday night in the fall without being at a Branson High School football game would be a foreign feeling for Scott McCaulley: “I’d definitely get the shakes,” he said.

From Week 1 of the 1990 season to the present, Scott McCaulley has had a constant presence with the Branson High School football program, calling more than 300 consecutive games.

For the last 315 games for the Branson High School football program, Scott McCaulley has posted up in the press box and brought the action to fans glued to their radios.

A Friday night in the fall without being at a Branson High School football game would be a foreign feeling for Scott McCaulley: “I’d definitely get the shakes,” he said.

It started innocently enough, with a game at Mountain Grove in Week 1 of the 1990 season.

Since that opener of the 1990 season, McCaulley has not missed broadcasting a Pirates’ football game for KRZK 106.3 FM.

He’s seen it all, through games at the old Branson High School to the new Pirate Stadium.

From three coaching regimes – Steve Hancock to Dan Henderson and current Branson coach Anthony Hays – to a bevy of all-state players and teams that made deep postseason runs, McCaulley has been on the call.

What’s it mean to a humble, typically soft-spoken 55-year-old who has been a way of life in not only football, but calling basketball and baseball games at schools throughout the Tri-Lakes area?

“I’m fortunate it has gone on this long, and I’ve not missed a game in those years, but I’m certainly blessed and lucky that it’s happened,” McCaulley said, before adding with a laugh, “besides being old, that is.”

It’s clear when he first put on the headset on that night in August of 1990 that he didn’t have a magic number of years (or games) he wanted to put in.

It was just the continuation of a lifetime spent around the sport, as a player at Greenwood Lab School in Springfield, and staying close while attending then-Southwest Missouri State and helping with game-day operations for Bears’ games.

“It wasn’t something I set out to do – it was just a deal where on Friday nights, I’m here at the stadium or on the road wherever Branson is at,” he said.

“There have been very few Friday nights over the last several decades where I have not been at a football stadium.”

Mention the prospect of not being at a football stadium on a Friday night in the fall, and McCaulley’s reaction is a visual one, like he cannot even fathom such a development.

“I’d definitely get the shakes, and wonder what it is that I would be doing,” he said. “Even to this day, I still get a special feeling on football opening nights. I got that when I played – there’s something about it that’s special, the juices get flowing.

“I know a lot of fans feel that way, and also players and coaches. It is a very special night.”

It helps to have a supportive and understanding wife. Scott and Karen will celebrate their 13th anniversary in January.

Karen doesn’t even know what life is like without Branson football games every Friday night in the fall.

McCaulley said there were only two “close calls” where the streak was in danger of ending, and both were for health-related reasons.

One was when his mother was undergoing surgery, and there was a backup plan in place if he couldn’t make the game. But things worked out and he was in the press box that night.

Another was when he had a kidney stone affecting him on the Friday of a game, but he said it “settled” and he was able to make the Pirates’ game in Rogersville that night.

Beyond that, it’s been fairly smooth sailing.

“There have been several games where my voice was not strong, but I was able to get through it,” he said. “I never was going to miss those games, but that’s the closest I came.”

Ask McCaulley about some of the most memorable players he can remember suiting up for the Pirates, and initially he balks. He doesn’t want to put together a list and potentially leave anyone out.

But the names that eventually come out are synonymous with Branson High School football lore.

It includes a stable of all-state running backs, dating back to Dan Kneeshaw and including Isaac Boyd, Beau Jackson and Malachi Daniels. Add in all-everything kicker Travis Brawner, Logan Hughes, Jeff Howard, Tee Helsel, Chance Thurman and Jacob Hamon, and you’ve got a pretty good cross-section of the players who have made the program what it is.

McCaulley also called Evangel University football games for 10 seasons, and his last season with the Crusaders overlapped with Hamon’s first season at the school.

Now Hamon is an assistant coach for the Pirates, bringing it full circle.

With 314 games under his belt – 315 was scheduled to be Friday night at Joplin – McCaulley had to take a minute to reflect when asked which games and which teams were the most memorable.

An easy answer included the runs to the state semifinals by the 1996 and 1997 teams.

For games? Those required more thought. But three came to mind.

One was a game early on in the series against state powerhouse Webb City. It was in the late-1990s, when Branson claimed a victory in Webb City.

Another was a battle of undefeated and state-ranked teams when Carthage came to town in the second or third year at the current Pirate Stadium. Branson was coming off a 1-9 season and the Pirates defeated Carthage in front of a packed house.

“It was a tremendous atmosphere here, and we won the game,” McCaulley said. “It was one of the few times we’ve beaten Carthage over the years, and terrific game, and one of the most electric moments we’ve had in this stadium in the few years we’ve been here.”

The final one he mentioned came in the early 1990s, when the Pirates were coming off a 5-5 season and made a dramatic run that included a victory over Willard at the old high school.

Brawner and Thurman were sophomores on that team, and after Willard tied the game, Branson moved the ball down the field on a couple of long runs before Brawner booted a 45-yard field goal on the game’s final play to win it.

“Of course, I went berserk in the press box with the call of that … I think I even ‘whooped’ or something,” he said with a hearty laugh.

What will the future bring? Obviously no one knows, and McCaulley doesn’t have his sights set on a certain number of years or games.

He will let it play out and take it as it comes.