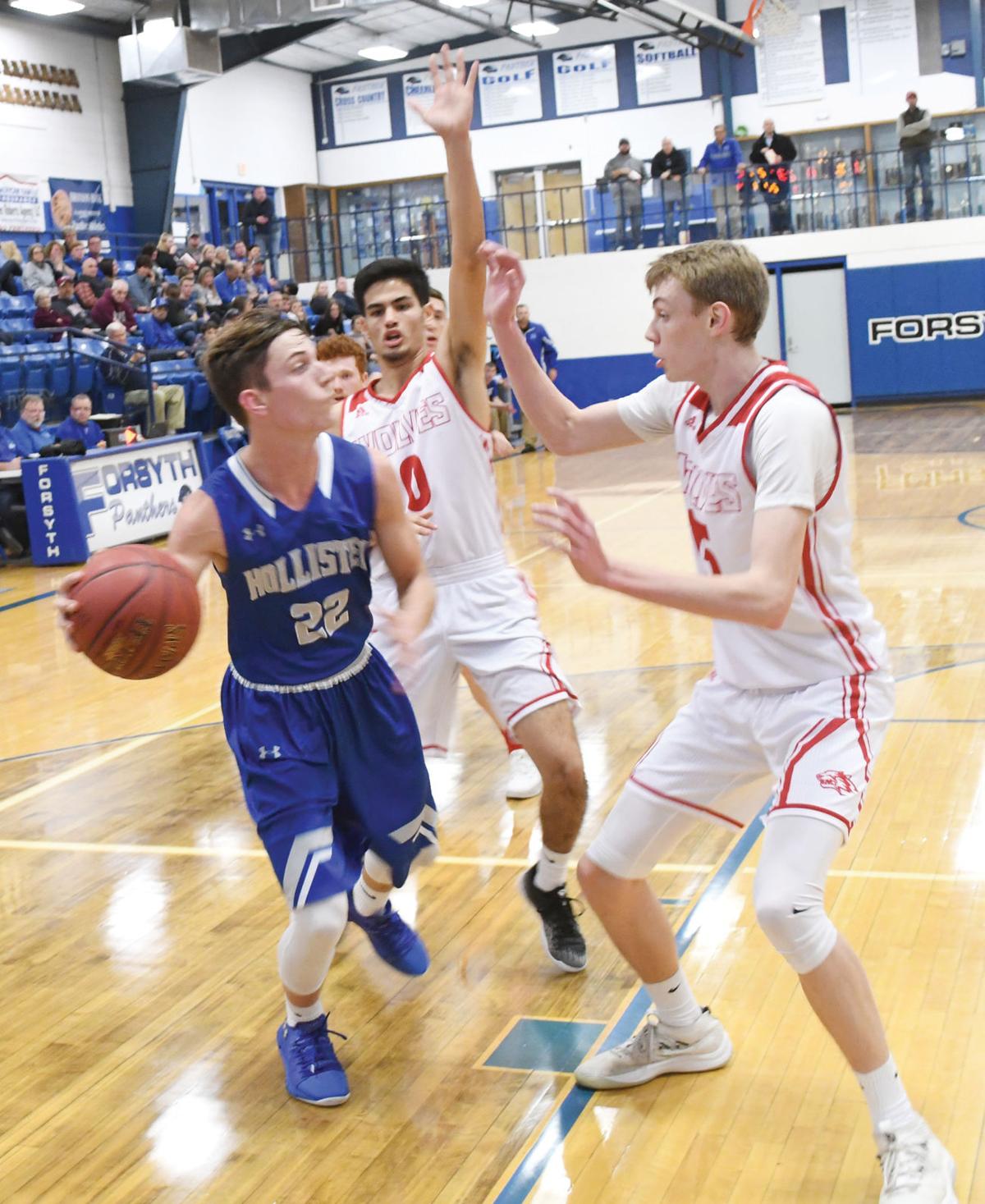 Hollister’s Logan Armitage (22) looks for an opening while being double-teamed by Reeds Spring’s Al Chavez (0) and Lance Hafar (right) during the first half of Monday night’s game. 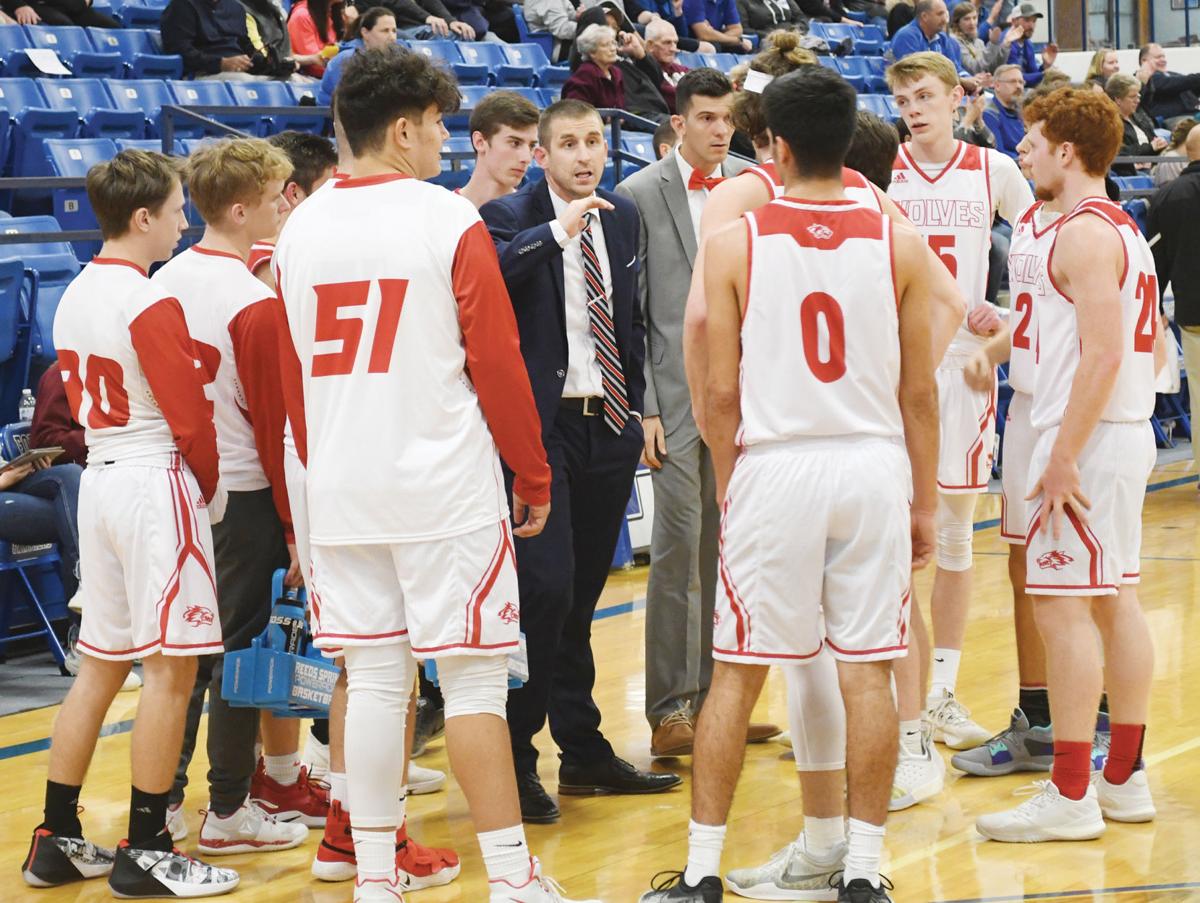 Reeds Spring coach Barry Yocom (center) makes a point to his team during a fourth-quarter timeout in his team’s first-round victory at the Forsyth Invitational.

Hollister’s Logan Armitage (22) looks for an opening while being double-teamed by Reeds Spring’s Al Chavez (0) and Lance Hafar (right) during the first half of Monday night’s game.

Reeds Spring coach Barry Yocom (center) makes a point to his team during a fourth-quarter timeout in his team’s first-round victory at the Forsyth Invitational.

There was one thing he was sure of though: that returning starter Troy Froeschle would need to score for the Wolves to be successful.

Imagine Yocom’s surprise, then, when Reeds Spring opened the season with a 58-47 victory over Hollister in the opening round of the Forsyth Invitational, and Froeschle finished with only six shot attempts and two points.

“With this group, I didn’t know that was possible,” Yocom said with a smile after his team advanced to Friday night’s semifinal round against Strafford.

There were plenty of offensive heroes for the Wolves, who shot 57 percent from the field and made seven shots from 3-point range.

Sophomore Lance Hafar scored 24 points, making 9-of-10 shots from the field and going 2-of-3 from 3-point range, and he added five rebounds.

Hafar scored six points in the final four minutes of the first half, on a low-post move and a pair of putbacks of offensive rebounds, with Ty Cooper nailing a 3-pointer and Dylan Kelley converting a three-point play as the Wolves took a 25-12 lead at the break.

Hafar put on a show in the fourth quarter, draining a 3-pointer from the corner while being fouled, converting a four-point play to make it a 42-31 lead midway through the period. He added a 17-foot jumper, then a dunk and another 3-pointer, and helped put the game away with three free throws in the final minute.

“Lance played well,” Yocom said. “He’s a guy who has a ton of potential, and he’s matured quite a bit. He played like the guy we needed him to be. That was big with him coming out.”

Cooper is a freshman who didn’t blink in his varsity debut. He finished with 17 points and made 5-of-9 shots from 3-point range.

“We knew the kid can play a little bit, but you never really know until he comes out under the lights,” Yocom said. “He stepped up and shot the ball.

“He had the big-shot mentality, and that was pretty cool.”

He scored 14 second-half points, including three 3-pointers in the early stages of the fourth quarter, each one cutting a double-digit Reeds Spring lead to single digits.

“Basketball is a game of runs, and I told them during a timeout to weather the storm and make your run,” Hollister coach Pete Leonard said. “We weathered the storm, but we were too far out of reach.”

STRAFFORD 71, SCHOOL OF THE OZARKS 40

Watch now: What it means to Josh and Daniel Imatorbhebhe to be reunited on the Illinois football team

The Patriots put together some stretches of solid play in their season opener, but not enough to overcome a deep and experienced Strafford team.

“You can’t have that inconsistency against a good team like that,” S of O coach Jerry Martin said. “It’s a hard first game, challenging, but it’s a really good one for us, because it’s probably as good a team as we’re going to see on our schedule all year, right off the bat.”

S of O hung tight through the first five minutes, and trailed only 11-8 after Ben Black hit Jack Carswell with a pass into the low post, resulting in a layup.

But Strafford ended the quarter with a 12-0 run, fueled by a Cade Rear 3-pointer, a Rear pass to Riley Oberbeck for a layup, a Zak Lutgen 3-pointer and a Lutgen pass to Oberbeck for an alley-oop layin.

Those three, along with junior Justice Reynolds, are the only experienced lettermen back from last season’s S of O team.

“I don’t think the guys hung their heads,” Martin said. “I think they did some good things that we can build off of. That’s the key, building some confidence.

S of O moved on to play Hollister in Thursday night’s consolation semifinals, while Strafford advanced to Friday night’s semifinal round against Reeds Spring.

“This is a good week – a tough week to get those guys their first varsity minutes against a good team, but it’s really good for them,” Martin said. “We can try different combinations and find out who can handle pressure and who needs to be inside and who needs to be outside.”

Eric Rogers collected his first victory as the Panthers’ varsity coach, in a first-round win over Blue Eye on Tuesday night.

Forsyth advanced to play Berryville (Arkansas), which claimed a 51-49 victory over Monett in the final semifinal, in Friday’s semifinal round.

Blue Eye, the 10th-ranked team in the state in the Class 2 preseason poll, was scheduled to play Monett in a consolation semifinal on Thursday night.