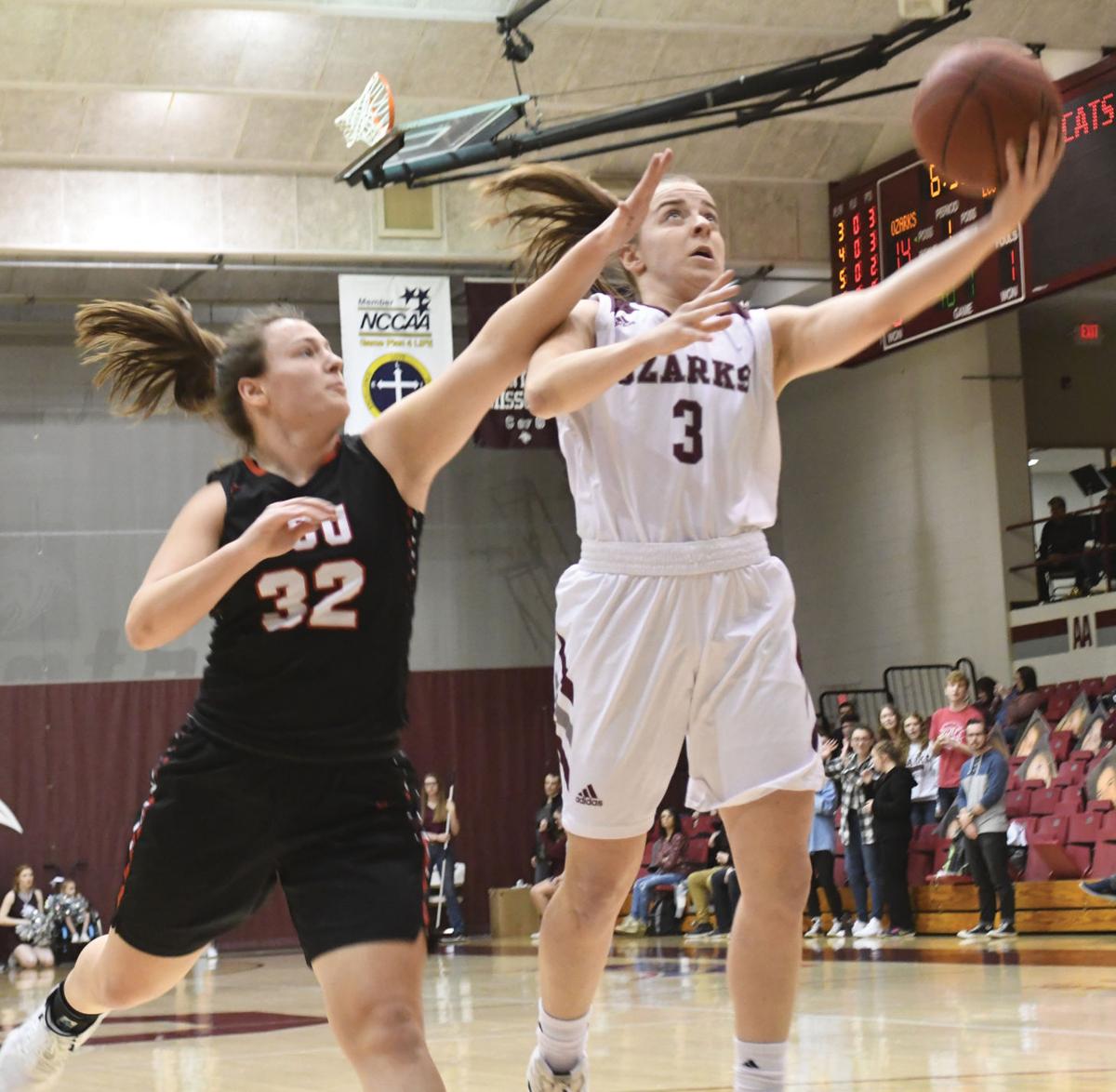 College of the Ozarks junior Abby Oliver (3) is back after averaging 13.1 points per game and making 83 shots from 3-point range for the national quarterfinalists last season. 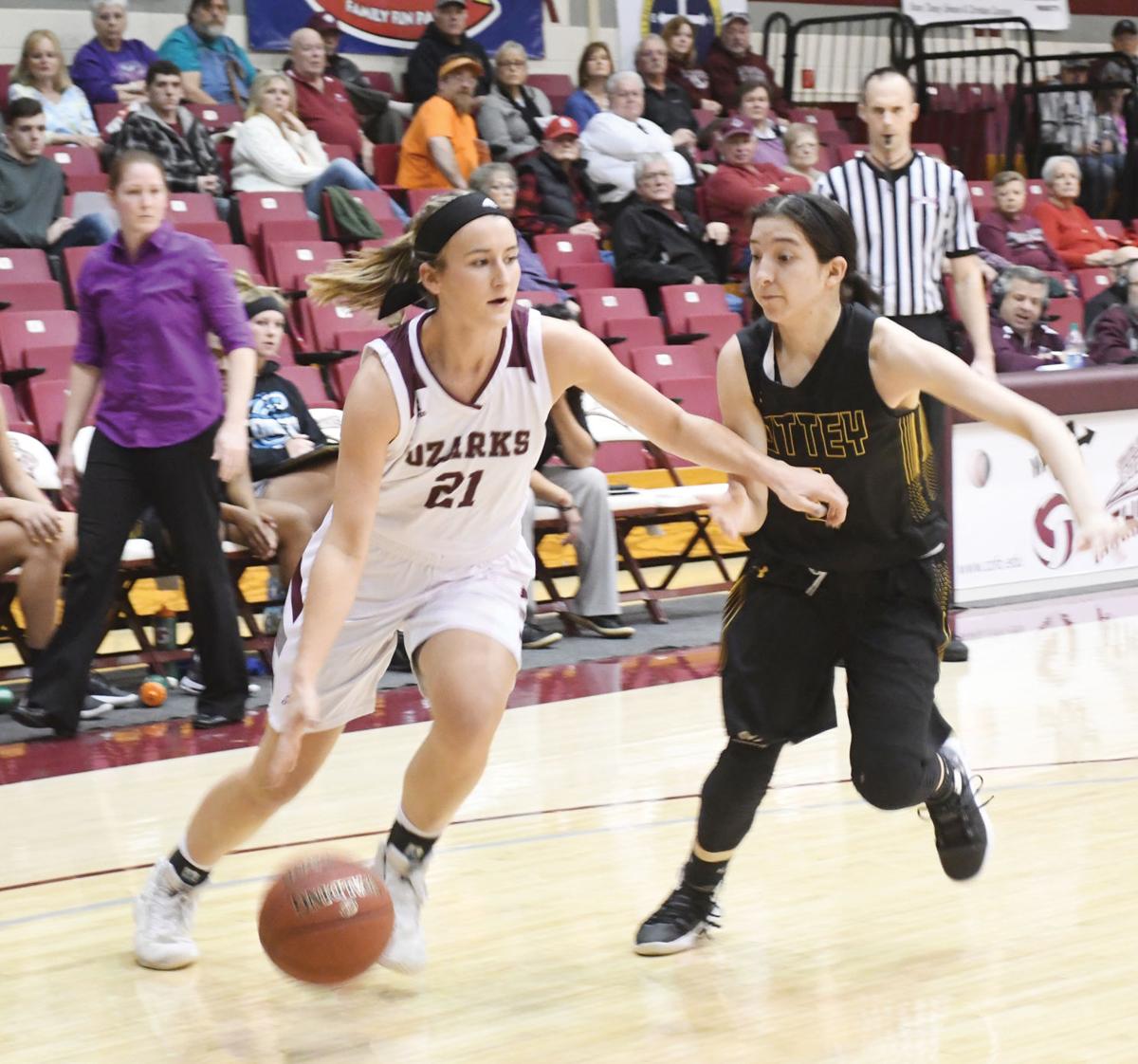 Michelle Gabani (21) led the College of the Ozarks women’s basketball team in blocked shots as a freshman and was named the team’s Most Improved Player.

College of the Ozarks junior Abby Oliver (3) is back after averaging 13.1 points per game and making 83 shots from 3-point range for the national quarterfinalists last season.

Michelle Gabani (21) led the College of the Ozarks women’s basketball team in blocked shots as a freshman and was named the team’s Most Improved Player.

In some ways, it’s easy to quantify what the College of the Ozarks women’s basketball team lost from last season’s team.

The three seniors – Kelsie Cleeton, Cass Johnson and Madi Brethower – from last season’s team turned in some of the most impressive and dominant careers in program history.

Cleeton scored 1,590 career points, averaging 11.9 points and 9.9 rebounds per game. She is C of O’s all-time career leader in rebounds and assists.

Johnson finished with 2,005 points and 414 career 3-pointers, averaging 15.1 points per game and shooting nearly 42 percent from 3-point range. She is the school’s all-time leader in career 3-pointers.

Brethower was a dependable third option, averaging 6.9 points per game and starting all 68 games in her final two seasons.

At the same time, though, it can be difficult to measure the contribution the trio made to helping the Lady Bobcats to a 118-16 overall record during their careers at the school.

It’s the leadership, experience and big-game attitude they brought that may be the toughest thing to replace. While there doesn’t figure to be anything easy about the first season post-Cleeton, Johnson and Brethower, C of O’s standard of excellence hasn’t led many to expect a huge dropoff.

As Becky Mullis enters her seventh season as the head coach of the Lady Bobcats, she took a 169-35 career record into Friday’s opening round of the College of the Ozarks Women’s Basketball Classic. And C of O enters this season with a No. 3 national ranking in NAIA Division II.

There was no easing into this season’s schedule, with the two-day tournament including reigning national champion and top-ranked Concordia (Nebraska), plus runner-up and preseason second-ranked Southeastern (Florida). The fourth team is 12th-ranked Sterling (Kansas).

Mullis admitted earlier this week that she is curious how her team will stack up against such loaded competition – and without her three graduated stars from last season.

“It’s been different, and it’s hard to replace experience,” Mullis said. “We lost tons of scoring, and they brought a lot of leadership, but they also brought a lot of experience. They played since they were freshmen and played in a lot of big games, and you can’t really teach those kinds of things.

“I am curious, to see how we manage a lot of things. But I have a ton of confidence in these girls.”

Two starters are back, in junior Abby Oliver (13.1 ppg, 83 made 3-pointers) and senior Aleksei Smith (7.6 ppg, 48 percent field-goal shooting). Senior Ashley Forrest (5.6 ppg) played in all 35 games last season, and Annie Noah (5.5 ppg) both return after playing key roles off the bench last season. With four newcomers joining the seven returning players on the roster, Mullis has been tinkering with different combinations on the floor.

She said she doesn’t even have a starting lineup locked in yet.

“I probably need to figure that out,” she said with a laugh. “I think we could go a number of different ways. I think we have a lot of unselfishness, where it’s not going to matter. I really do think that everyone is going to get to play and contribute.

“That’s one of our question marks, is what role will everyone play? It may be different from game to game, and I think we have the flexibility to do that.”

With the 6-foot Noah and 6-foot-2 Grace Steiger, there figures to be some visible changes from last year’s team, which often played with five guards on the floor.

“I think last year’s team to this year’s team is going to be a whole different look for us,” Oliver said. “Obviously we don’t have Cass to shoot outside or Kelsie to rebound for us, but I think we have some pretty good people coming in.

“I think as long as they hustle and know their roles, we’re going to have a good shot this year.”

The four newcomers all bring highly touted backgrounds and talented prospects to the roster.

* Kayley Frank is a 5-foot-7 guard who played on a Strafford team that has won 115 consecutive games and the last four Class 3 state titles.

* Harper Little is a 5-foot-6 guard from Clever, who was an all-state pick in volleyball and basketball, and also was a softball and track standout.

* Julie Stone is a 5-foot-7 guard from Thayer who helped the Lady Bobcats to the Class 2 state title as a senior.

* Jordan Wersinger is a 5-foot-8 guard from Springfield Kickapoo. She played on a state finalist and scored 1,500 career points for the Lady Chiefs. She transferred in after starting last season at Central Missouri.

The chemistry and process of getting the new players integrated in with the returning players has been a smooth one.

“It’s been a lot easier than I thought it would be,” Smith said. “I think it has come more naturally than in previous years. I think coach talks about how she doesn’t have to coach effort – everybody brings it every day, we don’t have to work about anybody not hustling.”

Just as important is the mindset that the new players bring to the roster. Oliver and Frank played at Strafford, which hasn’t lost a game since Jan. 21, 2016, plus Wersinger at tradition-laden Kickapoo, and Little at a successful program at Clever, all bring the expectation and experience of winning with them.

“I’ve reflected on that the last week or so,” Mullis said. “These girls, in their first college games in our scrimmages, they just came out and played. They weren’t rattled, they weren’t nervous – at least they didn’t show it.

“Just up and down the lineup, we have a ton of players who have known nothing but success and winning. I think that really helps us.”

Oliver spoke about the winning pedigree she’s been a part of. Since her freshman season at Strafford, she played on high school teams that went a combined 109-17, then C of O teams that went 62-6.

So if she ever got used to playing on losing teams, it would take some learning and getting used to.

And … “Yeah, I’m not interested in that,” Oliver said bluntly.

Smith said it didn’t take long for the new players to show their abilities and potential to make a quick impression during summer workouts.

The learning and transition hasn’t been a one-way street. The newcomers have helped give new wrinkles and show some things to the veterans on the team.

“It doesn’t always have to be an upperclassmen, either,” Smith said. “We’re learning things from the sophomores and the newcomers, things we haven’t seen before.

“I think we all learn from each other, and I think leadership-wise, it’s a little bit of a step up from last year.”

Mullis said it isn’t so much a situation where the newcomers will have a chance to contribute, but they will be expected to make a quick impression.

“We have seven returners and four new ones, so the new ones will have to contribute,” Mullis said. “We need to have them, and they’ve bought into that.