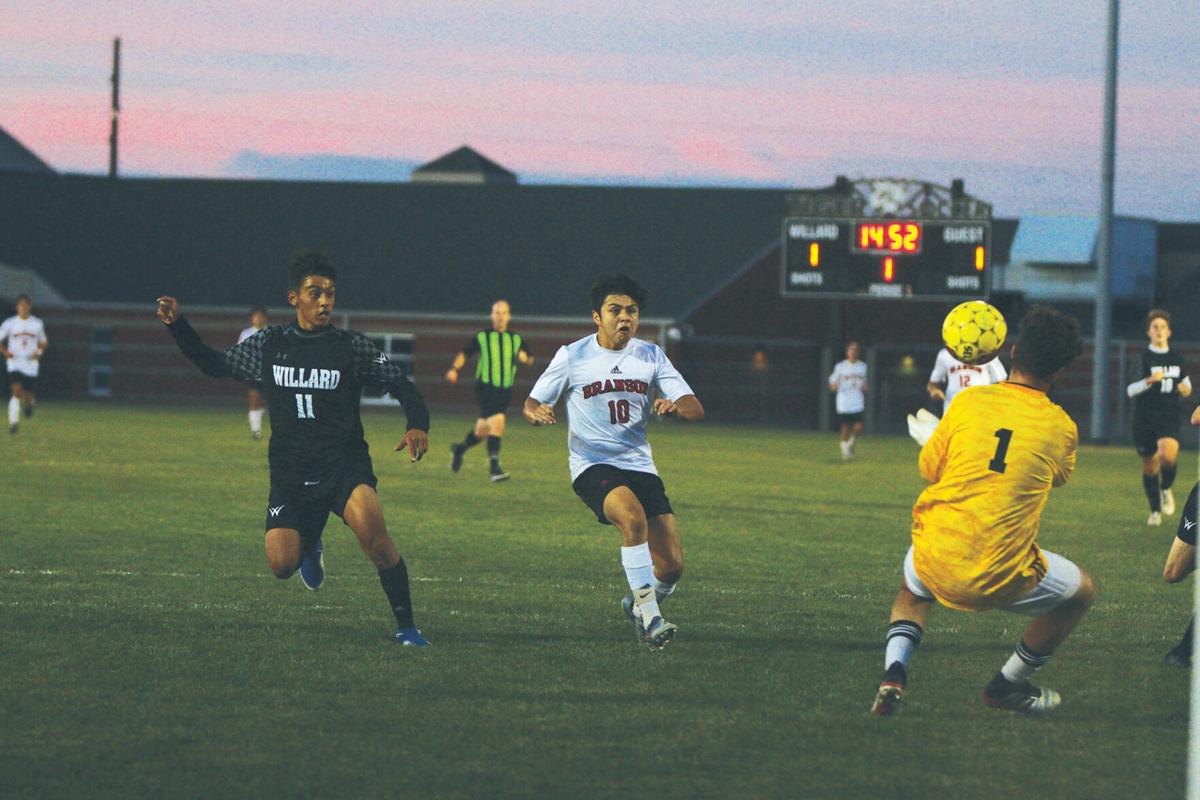 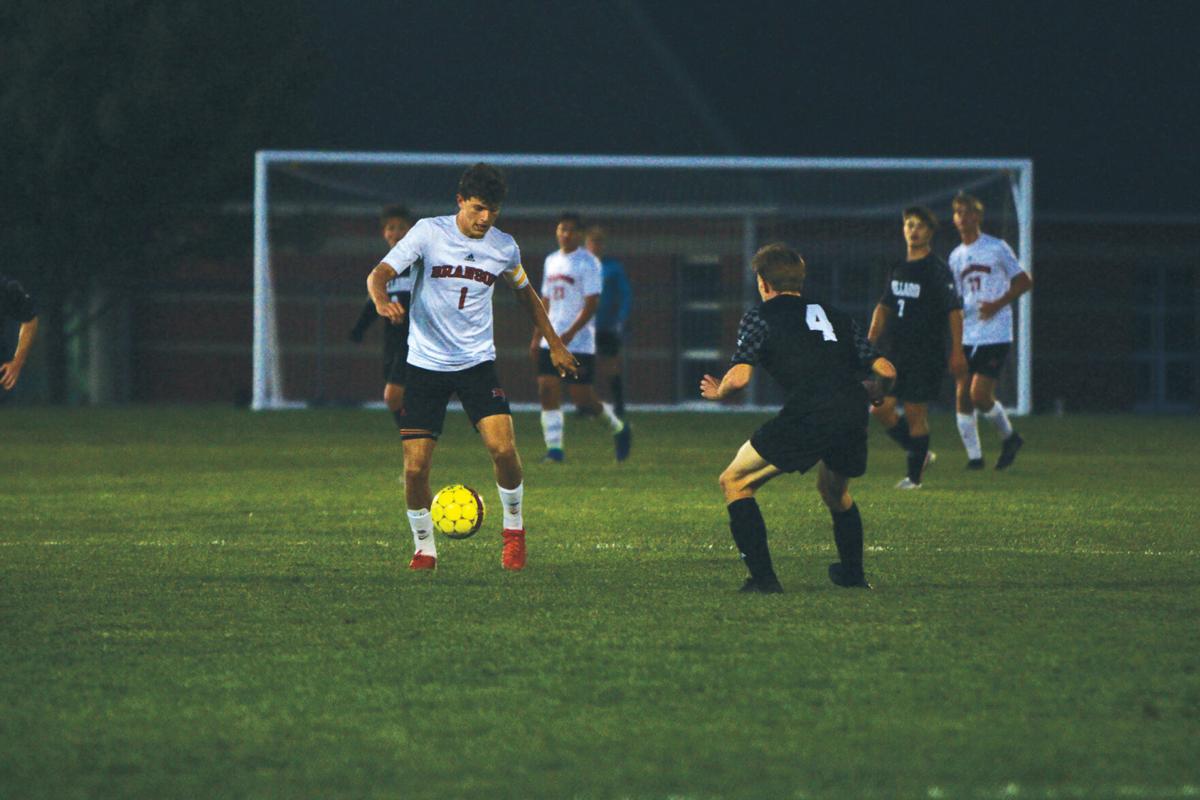 Junior Carlton Epps controls the ball in front of an opponent from Willard. The Pirates ended up falling 5-4 in overtime. 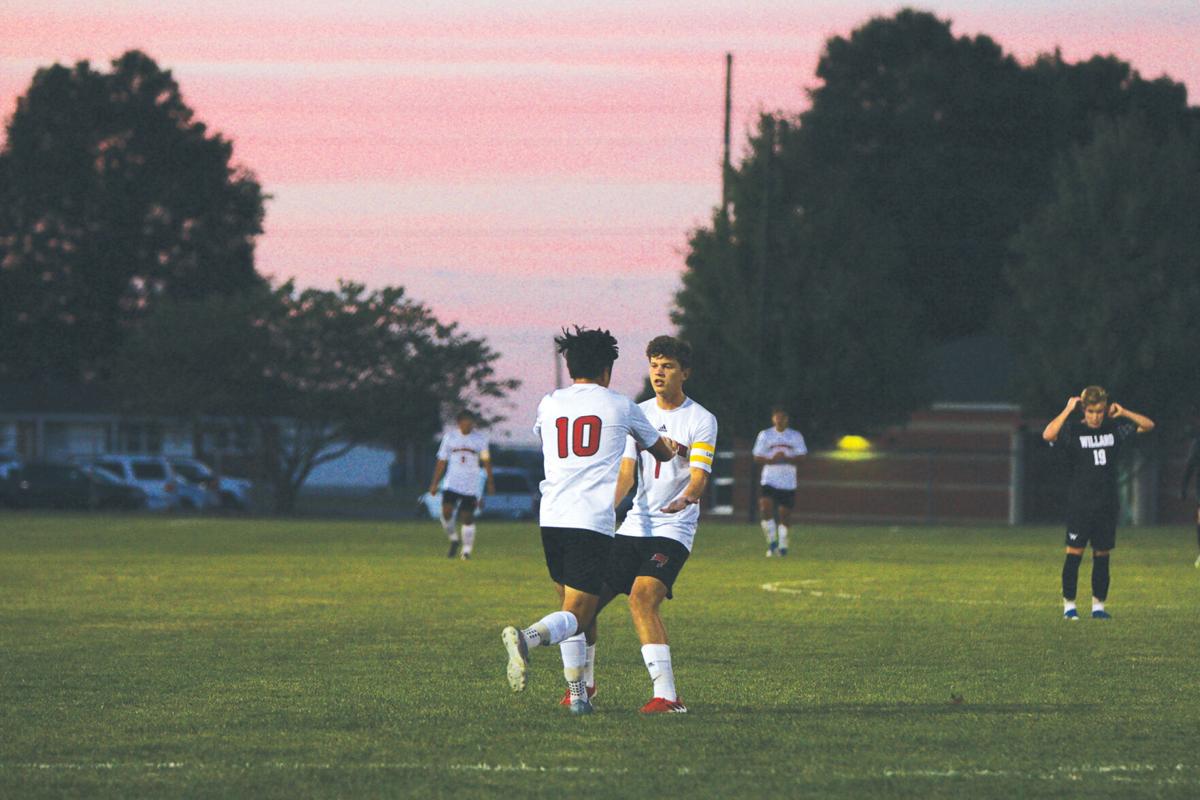 Junior Brayan Barboza celebrates his goal with his teammate junior Carlton Epps. The Pirates ended up falling 5-4 to Willard in overtime.

Junior Carlton Epps controls the ball in front of an opponent from Willard. The Pirates ended up falling 5-4 in overtime.

Junior Brayan Barboza celebrates his goal with his teammate junior Carlton Epps. The Pirates ended up falling 5-4 to Willard in overtime.

After an intense 5-4 overtime loss at Willard on Tuesday, Branson’s boys’ soccer team stands at 8-7 for the season overall and 2-3 in the Central Ozark Conference.

The soccer Pirates held onto the lead for 75 minutes of Tuesday’s game, but Willard eventually found the back of the net to tie the game up and send it into overtime. In overtime, Willard found its way past the Pirates’ defense to score and end the game.

The loss follows a weekend at the Bolivar Soccer Classic, where the team went 2-1 – beating Camdenton 4-0, Logan Rogersville 3-2 and losing to Monett 4-3 in the championship.

Head coach David Brenner noted the team has played a lot of games in a very short amount of time. They’ve had a five match week, a three match week and a four match week recently.

“When you play 12 matches in about 15 days, your legs get heavy,” Brenner said. “Mentally, it’s hard to stay sharp that whole time.”

In the last 12 games, the Pirates have gone 5-6. Brenner said they’ve hit a tough point in their season.

“Mentally, we’re going to have to refocus,” Brenner said. “We’re not finishing games out the way we’re starting them. As a coaching staff and as a team, we’ve got to take that focus to 80 minutes.”

Brenner said the team has been in a lot of one-goal games where they’ve had the lead. In their most recent three losses, they were in the lead. He said they allowed their opponents back in the games which let their opponents take the win.

“That’s just not OK,” Brenner said. “We’ve got to do better than that.”

The Pirates still have seven games left in the regular season after Thursday’s game against Parkview.

Next week, they play Ozark on Tuesday and Central on Thursday. Brenner knows both opponents are going to challenge the Pirates both mentally and physically, but he hopes what they’re putting in place in practice will pay off on the field come game time.

Arizona has five new coaches, some of whom are part of the 'gray-haired mafia.' Get to know them.

“We’re having a good season, but it could be better,” Brenner said. “You always want better.”

Brenner acknowledged this season has been different than most and even a little more tough due to the pandemic – which has changed the schedule, their practices and their lineups. Rather than focusing on that, though, he said the team gets up every morning focused on that specific day.

Despite all of the changes to the season, Brenner remains optimistic.

“I think we’re having a really good season,” Brenner said. “I’m very proud of my team. I couldn’t ask anymore from these young men than what they’ve given me so far this year.”

The Pirates play Ozark and Central next week. The rest of their schedule for the regular season is below.