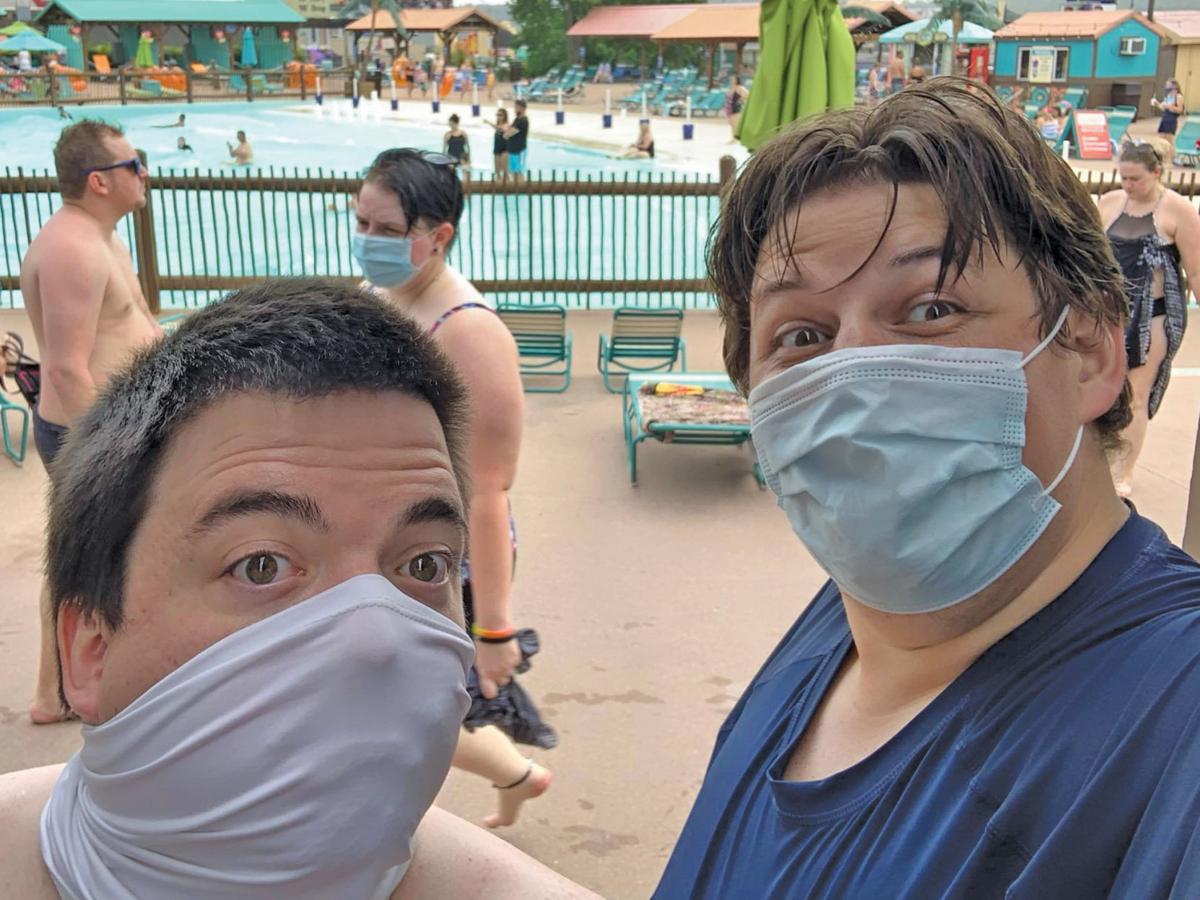 Branson Tri-Lakes News Reporter Tim Church (right) joined his friend Sean for a day of fun in the sun at White Water, which has opened for its 2020 season with new guidelines in place in response to COVID. 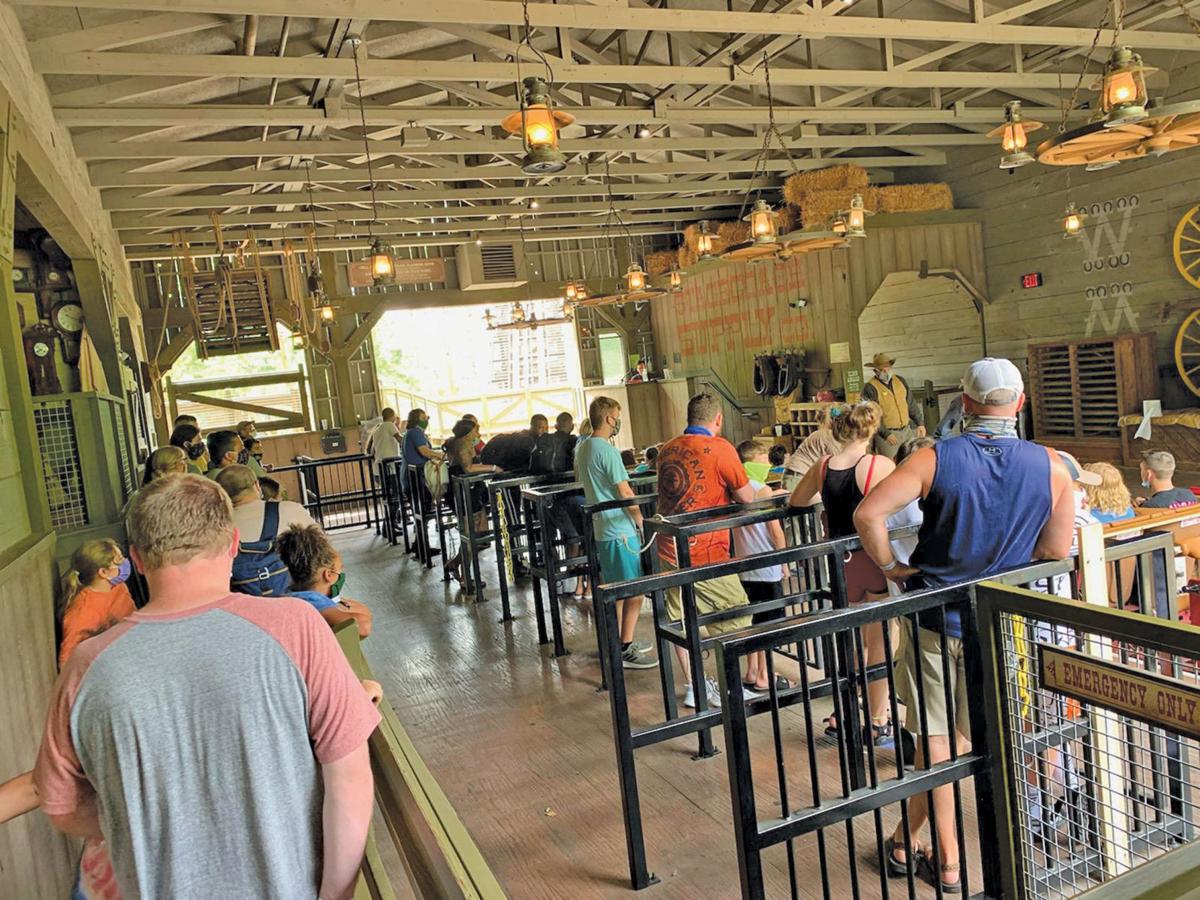 Social distancing and mask wearing were being observed by guests waiting in line for Outlaw Run at Silver Dollar City. Ride employees also squirted hand sanitizer into the hands of all those waiting in line before they could board the coaster.

Branson Tri-Lakes News Reporter Tim Church (right) joined his friend Sean for a day of fun in the sun at White Water, which has opened for its 2020 season with new guidelines in place in response to COVID.

Social distancing and mask wearing were being observed by guests waiting in line for Outlaw Run at Silver Dollar City. Ride employees also squirted hand sanitizer into the hands of all those waiting in line before they could board the coaster.

While they have each opened for the 2020 season, it was only on Saturday, June 27, that I got the chance to visit both of the Herschend Family properties.

I know a lot of people are curious as to what the experience is like now at each of the parks. Hopefully this will give a better insight into some of the new requirements and rules that have been established in response to the pandemic.

At both parks, the daily capacity has been limited and advance reservations are required. Also at both locations, guests are subject to a touchless temperature scan. Social distancing of up to six feet is also heavily encouraged and signage has been place throughout both properties.

Guests are also required, and expected, to wear a mask or face covering while on either property. Specific exceptions to the mask requirement include, when you’re ages 2 or younger, when eating or drinking, when swimming or on a water slide/ride or while in a lounge chair in a private rented space, such as the cabanas at White Water.

At White Water, when you walk up to the front gates, you’re immediately greeted by masked employees at a canopy tent who are taking everyone’s temperature. Once you’ve been subject to a touchless temperature scan, guests are given a wristband that establishes that you’ve been scanned and you don’t have a fever.

It’s an extremely quick process, and it takes only a matter of seconds to complete.

Heading into the front gates of the park, you’ll be asked to show your tickets or season pass, as well as your reservation for scanning.

Reservation barcodes can be scanned from your smart phones, but I also saw a few who had printed out their reservation paperwork. The employees seemed fine with either, so whatever is most convenient for you should work swimmingly for them.

I feel that I should point out that while I am a lover of White Water, my recent trip there is my first since my college days. This has been because many of the rides and slides at the water park have a weight limit of 300 pounds.

Those of you who know me personally, do know that I’ve been on a health journey since March 2019. Since then, I’ve successfully dropped a little more than 80 pounds, which has taken me to a current average weight of 292 pounds.

Yes, it’s still a lot of weight, and yes, I still have a long journey ahead of me. So when my friend Sean invited me to join him at White Water, I was enthused to say YES!

But I’ve got to tell you, being able to ride literally every single ride at White Water with no issues for the first time since 2013 was a huge self confidence boost and an even greater motivator for me to continue on my journey. #GetTimSlim

Now that I’ve bragged on myself a bit, let me tell you what the inside of the park looks like.

As people are consistently jumping from one water adventure to another, it did come to my attention that very few people were wearing masks. People waiting in lines for food at the various eateries appeared to be the main mask wearers. Ownership put these rules in place to help keep everyone safe and in my personal opinion, I would have liked to see more people wearing their masks.

Sean and I did our best to wear our masks while waiting in line for any of the rides, when it got a little too crowded in the lazy river and when we were walking from ride to ride. What we learned that day is a simple fabric mask can easily be held in your hand or stuffed into the pocket of your swim trunks with no problem while on a ride and then returned to your face once you’ve exited the water.

It’s a pretty simple concept and that’s how we did it for more than six hours with no problems. So my advice is to wear a mask as much as you can while at White Water and to social distance from people when you can’t.

Halfway through our day at White Water, Sean and I decided to take a break and drive over to check things out at SDC. While in the parking lot of White Water, we made our reservations for the 1880s theme park with no issues and drove on over.

At each of the tram stops for each parking lot, SDC has also set up a canopy tent where guests can get their touchless temperature scan and be handed a new mask. As our masks were quite wet from the water rides, we both requested and received new masks.

As we were still wearing our White Water temperature wristband, the employee conducting the temperature scans informed us that once someone gets scanned at one property, their wristbands are good for all the other Silver Dollar City Attraction properties the rest of that day. So we were able to get right on a tram without a second scan. The tram announcer, who sits in the very back of the vehicle, now also takes groups and assigns them a row to sit on.

Every other row on the trams have also been roped off to help with social distancing.

I would estimate that 99.5% of all park guests were abiding by the mask requirement, which was nice to see. Also, entry at the ticket gate was much like White Water’s. You show them your ticket or season pass and your reservation, they scan them, and you get to head right into the park. Very quick process.

Now, I know a lot of you might be thinking. What is the effect of limited capacity at SDC? Well I have been at SDC when it’s been at its busiest. I’ve also attended media events where it’s just been me and a handful of other reporters inside an empty park. Going to SDC on Saturday was much like the latter of those two. Our tram only had about 10 people on it, there were no lines to get through the ticket gates and the town square was nearly empty. But we quickly discovered where everyone was. They were in line for rides. Upon discovering lengthy wait times for Wildfire, American Plunge, Fire in the Hole, Powder Keg and the Giant Barn Swing, we decided to jump in line for Outlaw Run.

After waiting in line for around 30 minutes, we got close enough to see what was causing the lines to be long, social distancing aside. Outlaw Run was only running one coaster at a time. They were spacing groups out every other row, and after the coaster had run a handful of times they would spray it down with disinfectant and then run the coaster with no passengers to dry it off. So is the wait for rides long? Yes. Is it for your benefit, safety and health? Triple yes. As it’s said, good things come to those who wait.

After waiting approximately 45 minutes to ride Outlaw Run I unfortunately learned I have not yet lost enough weight to latch the seat belt to ride that coaster.

After that sad, dare I say, embarrassing moment, and due to the ever rising temperature, we made the excellent decision to return to White Water for the rest of the day.

While we were truly hoping to make it all the way through to Night Water, it only took a couple of more hours at the park for us to realize that we’d had enough fun in the sun for one day.

I’ll leave you with this. This pandemic has been hard and not a lot of fun. So it was really nice to see families and friends getting to have some fun on Saturday. It was probably even better to see the joy on people’s masked faces at both of the parks.

While the lines for rides at SDC were long and the lazy river was quite crowded at times at White Water, you could just tell that people were excited to be outside and enjoying the company of others for the first time in months.

I would also like to encourage people who plan to visit either of these parks to do all they can to respect and honor the new requirements that have been put in place.

They’re not only for your safety, but also for the safety of the hard-working people employed at these parks.

So wear a mask, wash your hands and respect people’s personal space by social distancing.

Yes, be sure and wear those masks, because they're working so well. NOT.