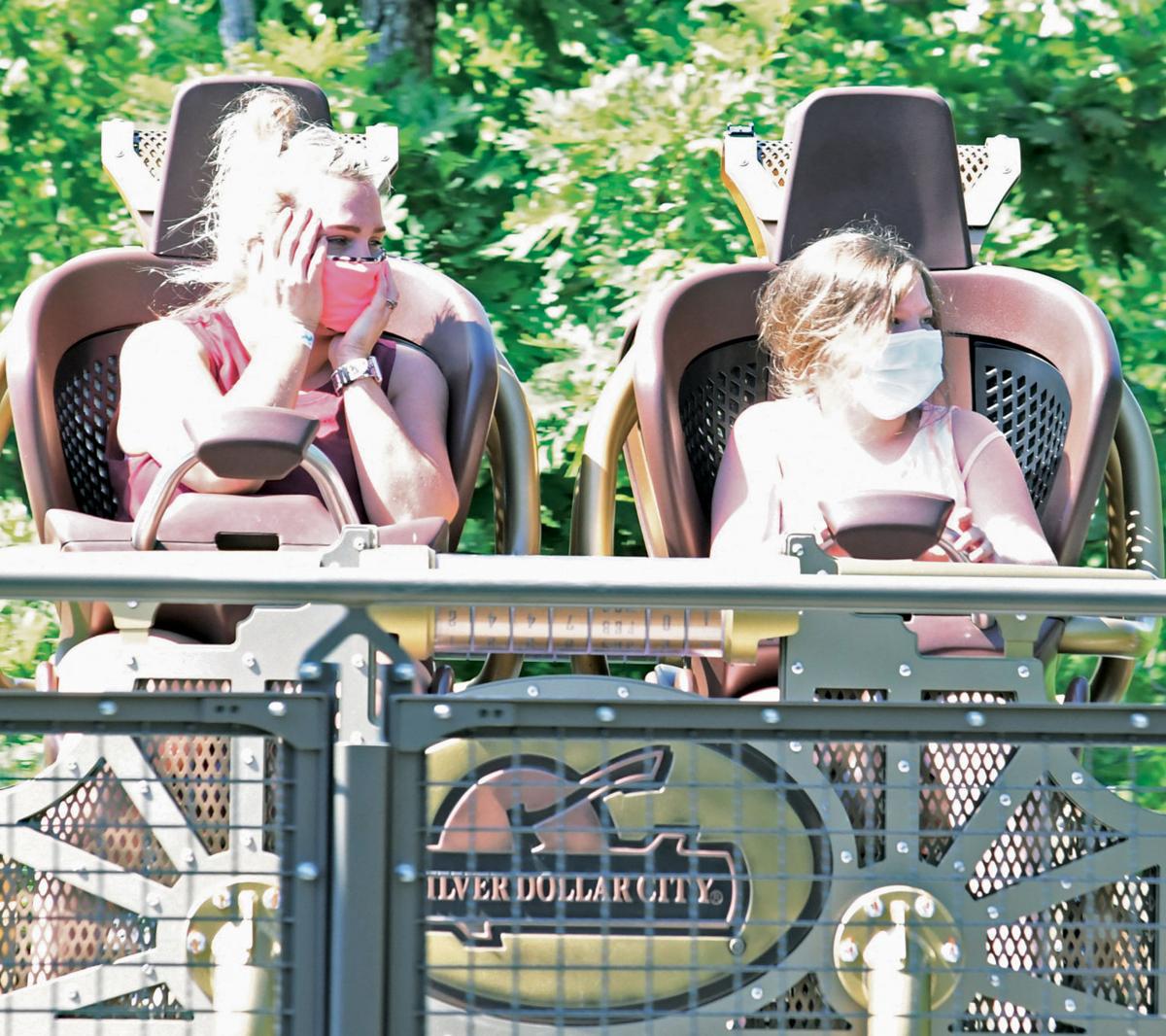 Smiles, screams and thrills could still be detected under the mandatory masks at Silver Dollar City, which opened for the first time in 2020 last weekend. 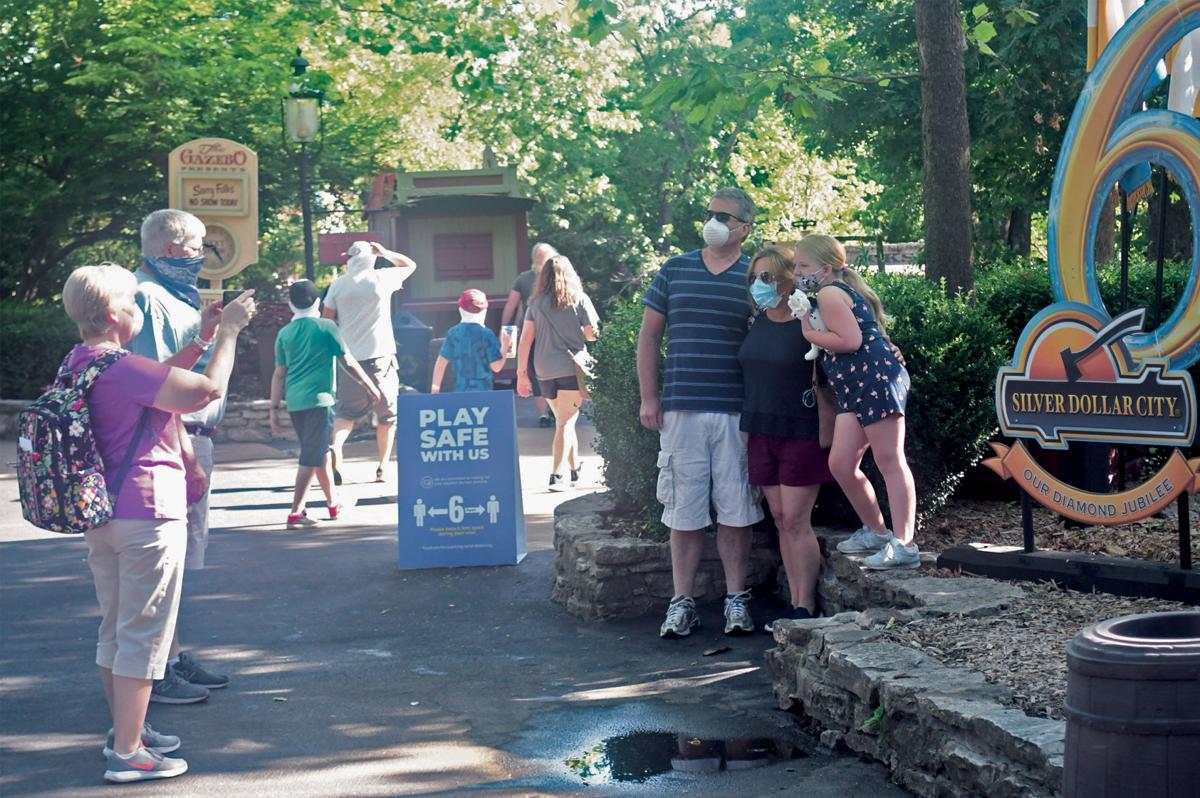 Even though they’re required to wear masks, folks posed for photos all over Silver Dollar City last weekend as the park opened for the 2020 season.

Smiles, screams and thrills could still be detected under the mandatory masks at Silver Dollar City, which opened for the first time in 2020 last weekend.

Even though they’re required to wear masks, folks posed for photos all over Silver Dollar City last weekend as the park opened for the 2020 season.

The tourism industry in Ozark Mountain Country got its largest attraction back last weekend as Silver Dollar City opened for business, albeit it with capacity limits and several new rules and regulations to help fight the COVID-19 virus.

“This is very significant, even with managed attendance numbers,” Silver Dollar City Public Relations/Publicity Director Lisa Rau said. “Significant to the health and economy of the area, from the standpoint that people are back to work.

According to Rau, getting the park open was a project in the works for quite a while now.

“Before we determined not to open (in March), we were already working on a plan,” she said. “We had heard enough we realized we needed to be ready whenever we were able to open.

“By the middle of March, we were already deep in the planning stages.”

According to Rau, a “core group” of employees who were not furloughed, worked the entire “pandemic” to make this opening possible.

“We worked on determining every angle and every practice in order to make it the safest environment we know how for families to come here, have fun, and have their dose of Silver Dollar City,” Rau said.

“While this was an evolving process, there are some things that have held fast. One of them was social distancing, and the other is wearing masks can be beneficial. We (at Herschend Family Entertainment) believe that wearing a mask shows respect to each other ... and helps keep each other safe.”

According to Silver Dollar City Attractions President Brad Thomas, wearing masks was simply the right thing to do.

“I don’t love it, but if I think doing this can possibly save someone some pain and suffering, I’m going to put a piece of fabric on my mouth,” he said.

Masks are available at every ride, as well as at the Cave Desk and Relaxation Stations.

In addition to the masks, Silver Dollar City Attractions is following new procedures based on guidelines from the CDC on prevention of the spread of germs, which includes:

-— Requiring masks for ages 3 and up, with some exceptions such as when eating and drinking, riding water rides & slides and inside the Relaxation Station

Because social distancing guidelines limit the capacity of the park, guests are required to reserve their visits at silverdollarcity.com/reservations.

“We’re managing capacity as we learn how the process of operating evolves,” Rau said. “Right now, we’re building toward 9,000 with the new reservation process.”

Even though there are lots of new things to be aware of before visiting the park, Rau said it is important to remember all the things folks love about Silver Dollar City are still at the forefront.

“Is it business as usual? No, it is not. Is it still Silver Dollar City? Absolutely,” she said. “Nothing is better than when the train whistle blows, the blacksmith anvil rings, and those crazy thrill seekers are laughing up a storm,. There is nothing better than to walk through this park and hear all those sounds, those wonderful sounds, and not only are we getting to hear those sounds again, but we’re also getting to smell the smells.

“Our Cinnamon bread and barbecue are already legendary, and to smell all that happening, and to hear those sounds again, it’s Silver Dollar City coming to life.”

When the park opened Saturday, so too did the new Clara Belle’s Cinnamon Bread bakery, as well as the Rivertown Smokehouse, the largest investment in a restaurant in both Silver Dollar City’s and the company’s history, spanning 10,000 square feet of riverside patio seating and themed to the “beauty and landscape of the Ozarks.”

According to Silver Dollar City’s Director of Food and Beverage Sam Hedrick, the  addition of the new Rivertown Smokehouse was to up the game when it comes to showcasing the famous barbecue.

“This project has been about two years in the making, and while we’ve always had a great barbecue presence here at Silver Dollar City, we wanted to take it to the next level, especially going into 2020 with the 60th anniversary celebration and the new ride,” Hedrick said. “We took our original restaurant down to the ground then rebuilt the smokehouse, and it is beautiful.”

Hedrick also said the menu features an array of favorites, all made from scratch.

“We make our own rub and everything from scratch, and we have fresh brisket and barbecue coming out of the smoker every day,” he said. “Plus, our side dishes are made fresh here as well. Those side dishes are equally as important as the main course in order to have a great, complimentary experience.

“We also have lots of great professional cooks here because we really wanted that expertise, to showcase that talent.”

One of those experts is Silver Dollar City’s Smokemaster Jim Clohessey, who has more than 45 years experience in the business, including at the Culinary Institute of America, as well as working for Wolfgang Puck, and serving as the executive chef for CNN, the Walmart Corporate office and the Braves home stadium in Atlanta.

“We’re so lucky to have him,” Hedrick added.

According to Hedrick, his opinion on the “one thing” folks have to try keeps changing.

“My original answer would have been brisket,” he said. “And while it is still amazing, when we did our smoked turkey, it was amazing and I put it on par with the brisket.”

As far as what Clohessey thinks folks should try, he was pretty definitive.

“The pork butts and mac and cheese,” he said. “You can have those two things today and tell people you had the best.”

Once folks enter the Smokehouse and get their food, they then head outside to have a seat and eat.

“We have a covered seating area and an outdoor seating area to really help encapsulate what the new ride and area are,” Hedrick said. “We’re nestled right into the new Mystic River Falls, and the channel actually goes around our seating area, so you’ll be able to see the spills, thrills while having great food and staying dry on land.”

Mystic River Falls on its own represents a $23 million investment, and will see riders splash through “nearly a half-mile scenic journey, navigating hairpin turns, high tides and a hidden mine shaft on more than a five-minute trek.” The ride will end with the “tallest raft ride drop in the Western Hemisphere” at 4.5-stories.

“It is absolutely a work of art and an engineering marvel,” Rau said. “It takes your breath away with how pretty it is. It’s a full pier of yesteryear.

“The whole thing is very exciting and fun.”

While an exact opening date for Mystic River Falls isn’t set in stone, nor is the official 60th Diamond Jubilee Anniversary, there is still plenty to do at the park.

In addition to the more than 30 themed rides and attractions, including record-setting coasters Time Traveler, Outlaw Run, the Grand Exposition and Fireman’s Landing areas for “the littles,” and other family favorites like Tom and Huck’s Riverblast and the Frisco Silver Dollar Line Steam Train, there are lots of shows and activities to take part in.

“A lot of things we had planned for the spring, we’re just going to do next year,” Rau said. “We’re going to keep rolling with the 60th, and we will make sure we deliver on all those 60th anniversary promises. Right now, we’re going to do summer, into Moonlight Madness, into Southern Gospel, then into the fall.

“So we’re just picking up where we would have been.”

During “Summer in the City,” folks can see the comedy and variety act of funnyman Chris Stanley, as well as the acoustic harmony of Lindley Creek and their rich legacy of gospel and bluegrass. The famed Silver Dollar City Saloon and Sagebrush Sadie’s, accompanied by the Silver Dollar Band, has moved to the Boatworks Theatre for “a new experience outside the walls and in the fresh air.”

Also back are the antics of the City’s Street Troupe, as well as Mike Bliss with comedy, juggling, unicycling and magic. The Echo Hollow Amphitheatre is also back with “Hits From the Hollow” nightly at 6 p.m.

More visiting artists include That Dalton Gang, Southern Raised and the Baker Family. More returning favorites include the Homestead Pickers, southern gospel group, the Spoken 4 Quartet, and the three part harmonies of the Sons of the Silver Dollar.

The park is also featuring Daily Hymn Sing-a-Longs on the Gazebo, and Sunday morning church services will be held at the Dockside Theatre Sunday mornings at 9:30 a.m.

Later this summer, Silver Dollar City’s Moonlight Madness brings extended hours  to the city. Moonlight Madness sees the park remain open until 10 p.m., and even midnight on Aug. 1 and 8. Special dance parties happen nightly on the Square, with fireworks capping the night from Echo Hollow. Electro pop group The Rosy Hips takes to the Gazebo stage Aug. 1, while 90s cover band The Mixtapes closes out the night on Aug. 8.

Silver Dollar City will then move into the fall with Southern Gospel Picnic and The National Harvest Festival featuring Craft Days & Pumpkins In the City, then cap off the 2020 season with An Old Time Christmas.