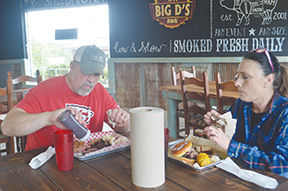 Doug and Lauren Konopasek sit down for some barbecue at Big D's BBQ in Branson. The longtime food truck opened up a Branson location on May 7. 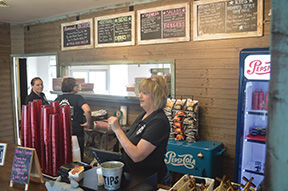 Doug and Lauren Konopasek sit down for some barbecue at Big D's BBQ in Branson. The longtime food truck opened up a Branson location on May 7.

A longtime Branson food truck business has set down roots to serve up barbecue from its own building.

Big D’s BBQ officially opened at 1550 W Missouri 248 on May 7. Dana and Linda Peterson, co-owners of Big D’s, said there were plenty of obstacles on the road to opening a restaurant, but they’re glad to be open for business, thanking the teammates and crew members who helped make the dream a reality.

“If there was a hurdle to jump, no matter how high, we’ve jumped it and carried on,” Linda Peterson said.

“We started out a couple years ago with the food truck and quickly outgrew that model,” Dana Peterson said. “We had an opportunity to take a restaurant over last year in a theater on the strip, although it wasn’t really our place.”

The pair are also familiar with their new home, having spent time selling out of a nearby gravel lot close to the new location.

“I think this is a real up-and-coming location here on Highway 248,” Linda Peterson said. “You have new business coming in across the street, the chamber’s new building, tourists frequent this road.”

For those who never had the opportunity to dine at the Big D’s food truck, Dana Peterson said diners can expect an authentic barbecue experience.

“We cook everything from start to finish on the smokers,” Dana Peterson said. “We don’t make anything in the oven, use any kind of infusers, it’s real, old-school, traditional barbecue.”

The authenticity extends into the design of the restaurant as well, with Dana Peterson saying they put much of themselves into it as well.

“If you ever want to know what Big D and Mama D’s house looks like, you can just come here,” Linda Peterson said. “Except, we have a little more taxidermy on the walls.”

According to Linda Peterson, in addition to providing a great food, the restaurant should serve as a place to visit and come back to, like a familiar book or movie.

There’s even a long table running through the middle of the building known as the “Pitmaster’s Table.” According to Dana Peterson, the table shows the belief barbecue is a social activity.

“You sit around and have a good conversation and have some good food,” he said. “But not everyone is with a group when they stop in to eat, but being in a tourist town it can be nice to bump into someone from another part of the country and just share stories with them.

“That’s what barbecue is all about.”

The couple also said they plan on having special themed plated dinners known as “The Pitmaster’s Table.”

“It’s a theme that will have to do with a different regional or cultural aspect of barbecue from around the world,” Dana Peterson said. “It’ll be something you make a reservation for.”

Even though the truck can now be found parked outside the restaurant, Dana Peterson said it isn’t being retired from events and festival appearances.

“It’s even going to be gone this week for a couple of events,” he said. “So we’ll still take it out on the road, even with the restaurant here and using it to cook here.

We have a lot of cooking capacity with more smokers being built as well.”