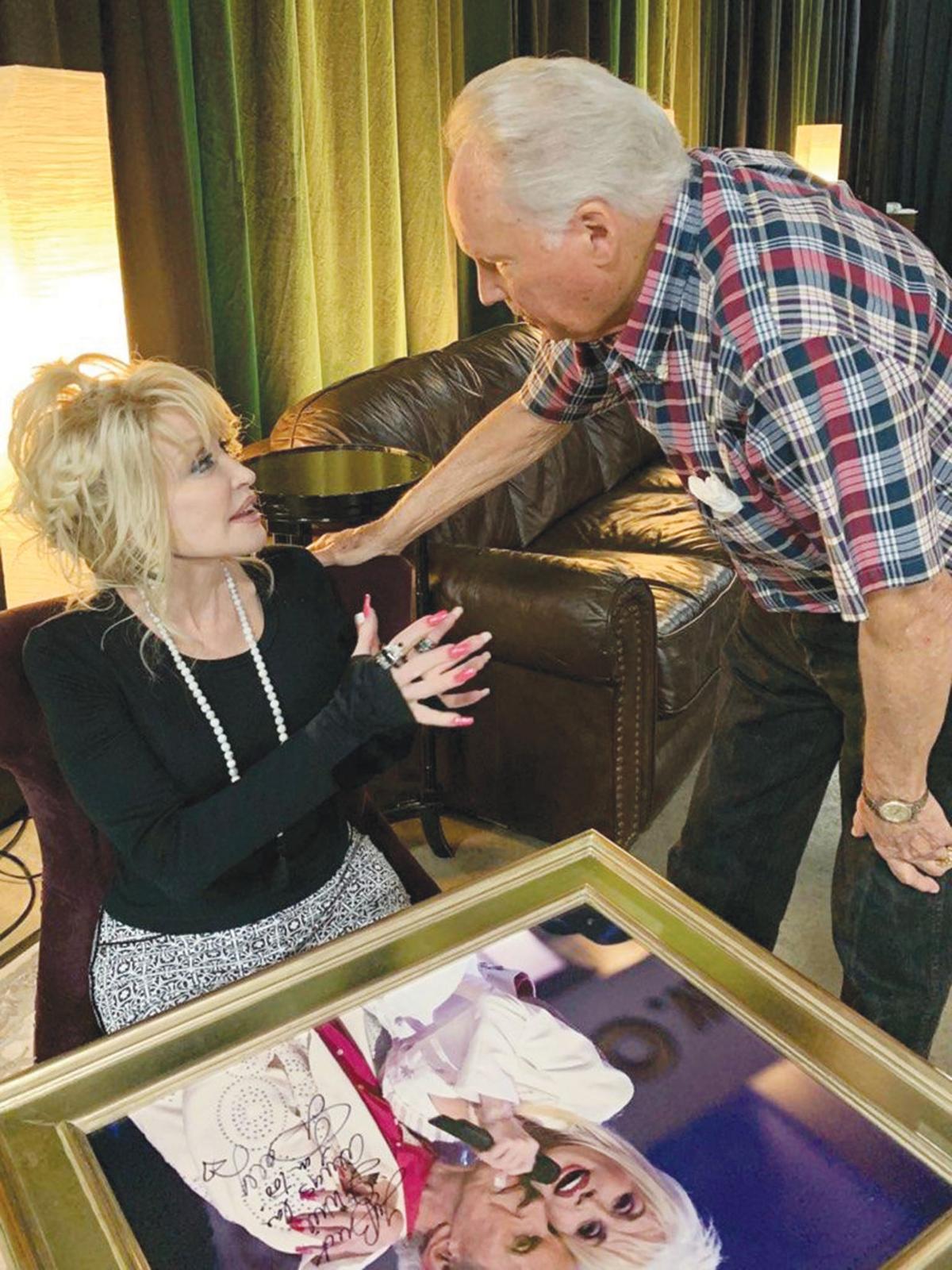 Dolly Parton, left, chats with Buck Trent, who will join her Oct. 12 at the Grand Ole Opry for a special show celebrating Parton’s 50th anniversary performing on the Opry. 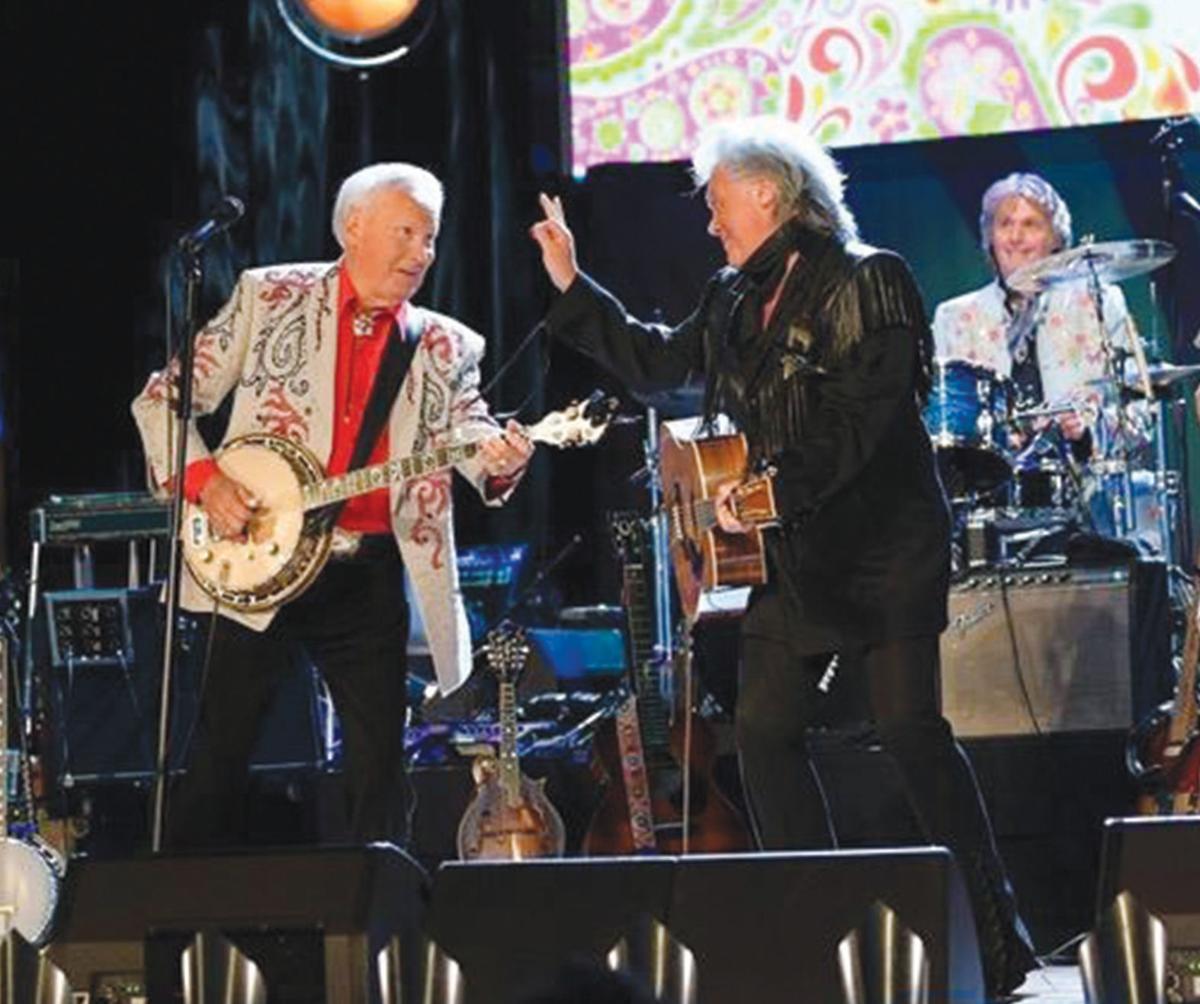 Buck Trent, left, performed alongside Marty Stuart last month at the Country Music Hall of Fame. Trent is also set to perform alongside Dolly Parton Oct. 12 at the Grand Ole Opry, celebrating her 50th anniversary performing on the Opry. 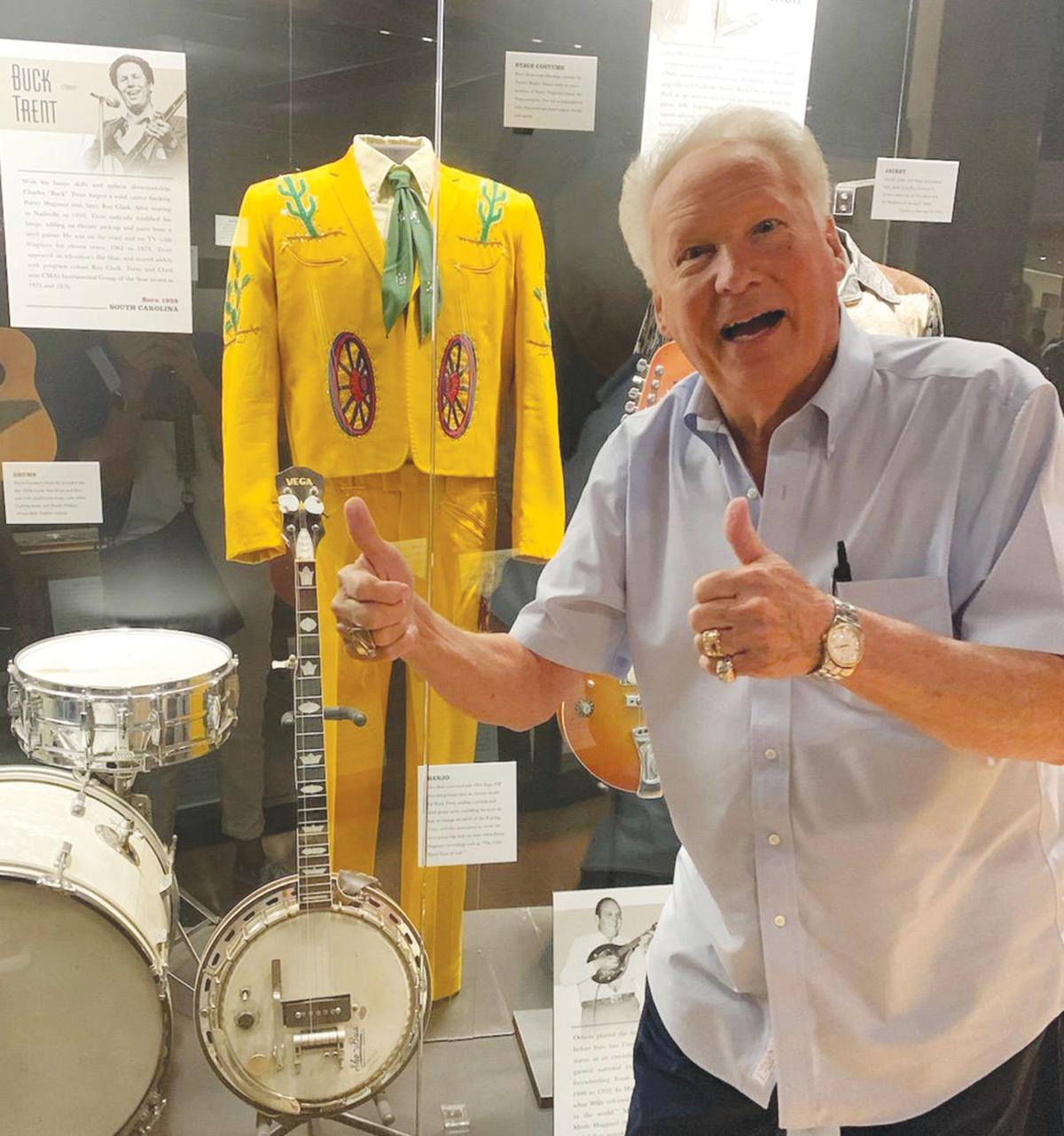 Buck Trent check out a display featuring one of his suits, as well as the first electric banjo at the Country Music Hall of Fame. 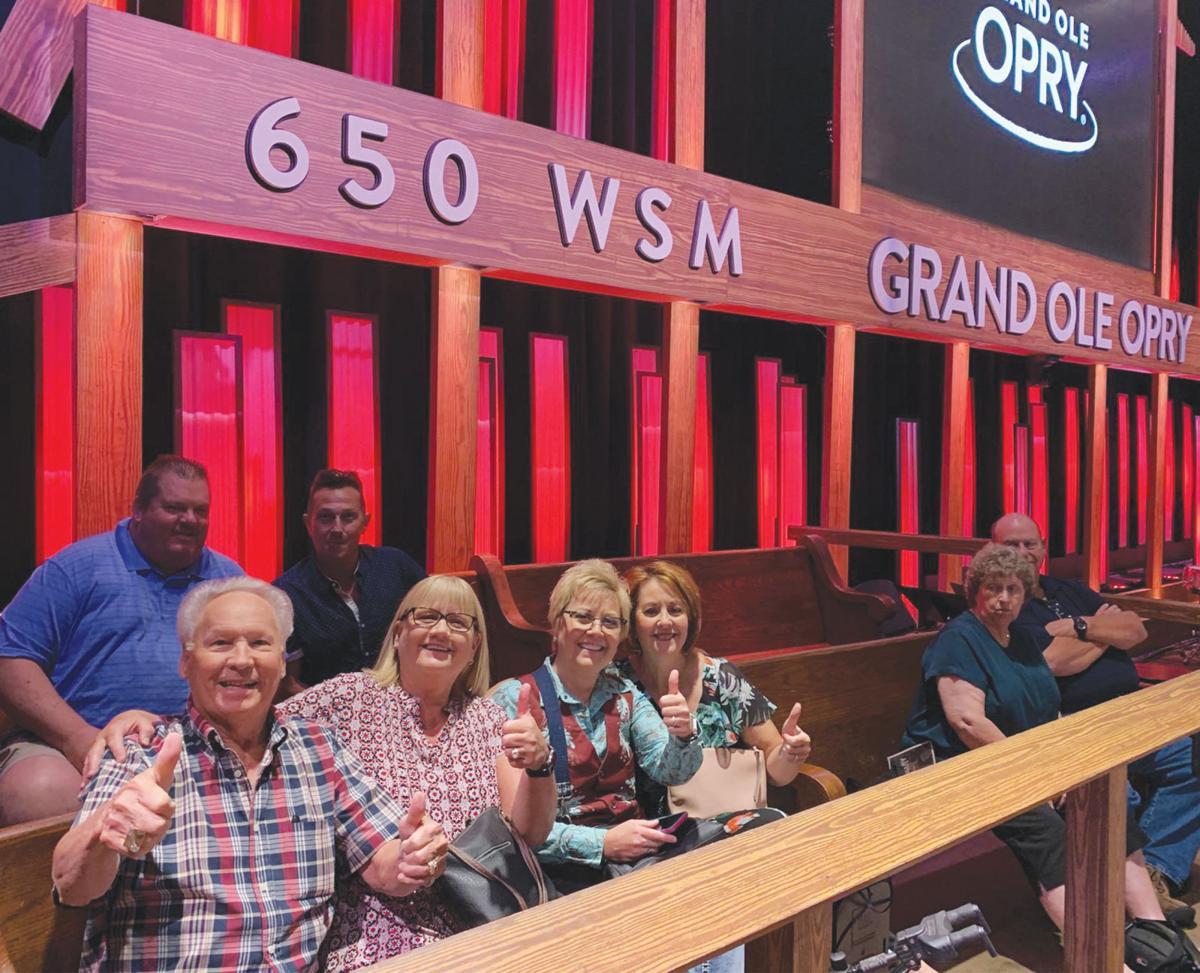 Buck Trent, left, his wife Jean and several other friends attend a show at the Grand Ole Opry in Nashville.

Dolly Parton, left, chats with Buck Trent, who will join her Oct. 12 at the Grand Ole Opry for a special show celebrating Parton’s 50th anniversary performing on the Opry.

Buck Trent, left, performed alongside Marty Stuart last month at the Country Music Hall of Fame. Trent is also set to perform alongside Dolly Parton Oct. 12 at the Grand Ole Opry, celebrating her 50th anniversary performing on the Opry.

Buck Trent check out a display featuring one of his suits, as well as the first electric banjo at the Country Music Hall of Fame.

Buck Trent, left, his wife Jean and several other friends attend a show at the Grand Ole Opry in Nashville.

Country music performer Buck Trent has been a staple in the world of music business for more than 70 years, and just a handful of months shy of his 82nd birthday, he’s starting to “get hot” again.

In addition to his current “Hee Haw” reunion show with former co-stars Lulu Roman, Misty Rowe, and Jana Jae, Trent sat in with Marty Stuart as a part of one of his Artist-In-Residence shows at the Country Music Hall of Fame in Nashville, and is also set to join Dolly Parton next week as she celebrates her 50th anniversary performing on the Grand Ole Opry.

“It’s amazing, just amazing,” Trent said. “We went to Nashville and I played the Country Music Hall of Fame with Marty Stuart and got a standing ovation.

“It was fantastic, and even Rolling Stone Magazine said I was No. 2 of the best five things about the show (behind Stuart and his guitarist Kenny Vaughan).”

Trent, a Spartanburg, South Carolina native, began performing on WORD radio at the age of 10. At the age of 21, he arrived in Nashville where he joined the Bill Carlisle Show, and first appeared on The Grand Ole Opry.

Not only has Trent been credited with creating the “Porter Wagoner sound,” but he was also instrumental in creating a sound all his own. It wasn’t too long after joining Wagoner that he and Sho-Bud Steel guitar builder and sought-after custom guitar builder Shot Jackson electrified the 5-string banjo.

The  first model of this banjo, along with Buck’s “Wagonmaster” suit, is on display in the Country Music Hall of Fame museum.

Even from his first forays into the music business, Trent said he made the decision to make sure money was never a driving force.

“I’ve never done this for the money,” he said. “I’ve never hit one note for the money. I worked for Porter Wagoner for 12 years and we always just split the money, because that isn’t what we were doing it for.

“I was able to play on a bunch of their hit records, and even a few of Dolly’s bigger hits,” he said. “I played on ‘Coat of Many Colors,’ ‘Jolene’ and ‘I Will Always Love You.’ I get a nice little check every once in a while from that one.”

In late 1973, Trent parted ways with Wagoner to join the “Roy Clark Show,” but  felt nothing but love for his friend. Although Wagoner passed away in 2007, he is still as much a part of Trent’s life as he ever was.

“He was 10 years older than me, and I learned a lot of good things about business and life,” he said. “We never had one cross word in 12 years and shook hands every night. He was one of the finest leaders I’ve ever met. I loved him.”

No too long after hooking up with Clark, Trent realized if he wanted to make a go of it being a celebrity, he had to work on being a performer, not just a player.

“Roy Clark taught me I had to be an entertainer, not just a picker,” he said. “It was with Roy I learned to be a showman.”

With his “showmanship” on the rise, Trent soon joined Clark, Buck Owens and the rest of the cast of the hit TV show “Hee Haw.” In 1976, Trent, Clark and the whole band went behind the Iron Curtain, becoming the first country music act to tour the Soviet Union.

He first played Branson in 1981, and in 1990, made the move to town, opening the area’s first full-time morning show, which ran for close to 30 years. He’s lived in Branson ever since.

According to Trent, Stuart had been performing dates with Chris Hillman and Roger McGuinn from the group the Byrds, and when they played Springfield, he went for a visit.

“Marty called me and said ‘Hey, the Byrd people want to see the electric banjo,’ so I took it up there to show them,” he said. “That’s when he asked me about doing his show in Nashville.”

Trent joined Stuart for the “‘Psychedelic Jam-Bo-Ree,” the second of Stuart’s three Artist-In-Residence shows at the Country Music Hall of Fame. In addition to Trent, Stuart and his band, the Fabulous Superlatives, as well as Old Crow Medicine Show, country music icon Connie Smith, Hillman and McGuinn from the Byrds, and both square and go-go dancers.

“I’ll tell you pal, that show was it,” he said with a laugh.

Once he finished performing with Stuart, Trent performed with Chris Scruggs and his crew, went to visit the Grand Ole Opry, and even got to catch a display featuring some of his own artifacts at the Country Music Hall of fame.

“That was good, that was really good,” he grinned. “Then I did a rehearsal with Dolly and her band.”

That rehearsal was for a special show Oct. 12 at the Grand Ole Opry, celebrating her 50th anniversary performing on the Opry stage.

“She’s doing the ‘Carol County Accident’ for her 50th anniversary performing on the Grand Ole Opry, so she wanted me to do it with her,” and excited Trent said. “You know, she and I did that song on my ‘Spartanburg Blues’ album, and she wanted me to do it on the Opry with her. So we did it just like we did in the old days, and I kicked it off the same way. Her band really liked that. That’s big time, that’s really something she wanted me to do this with her.”

Trent hasn’t performed on stage with Parton since 2007, when Wagoner celebrated his 50th anniversary performing on the Opry. He’s got another show with the “Hee Haw girls” before heading  out to Nashville late next week.

“Playing music and performing has been my whole life,” he said. “And I just love my life, it’s a great thing, pal.