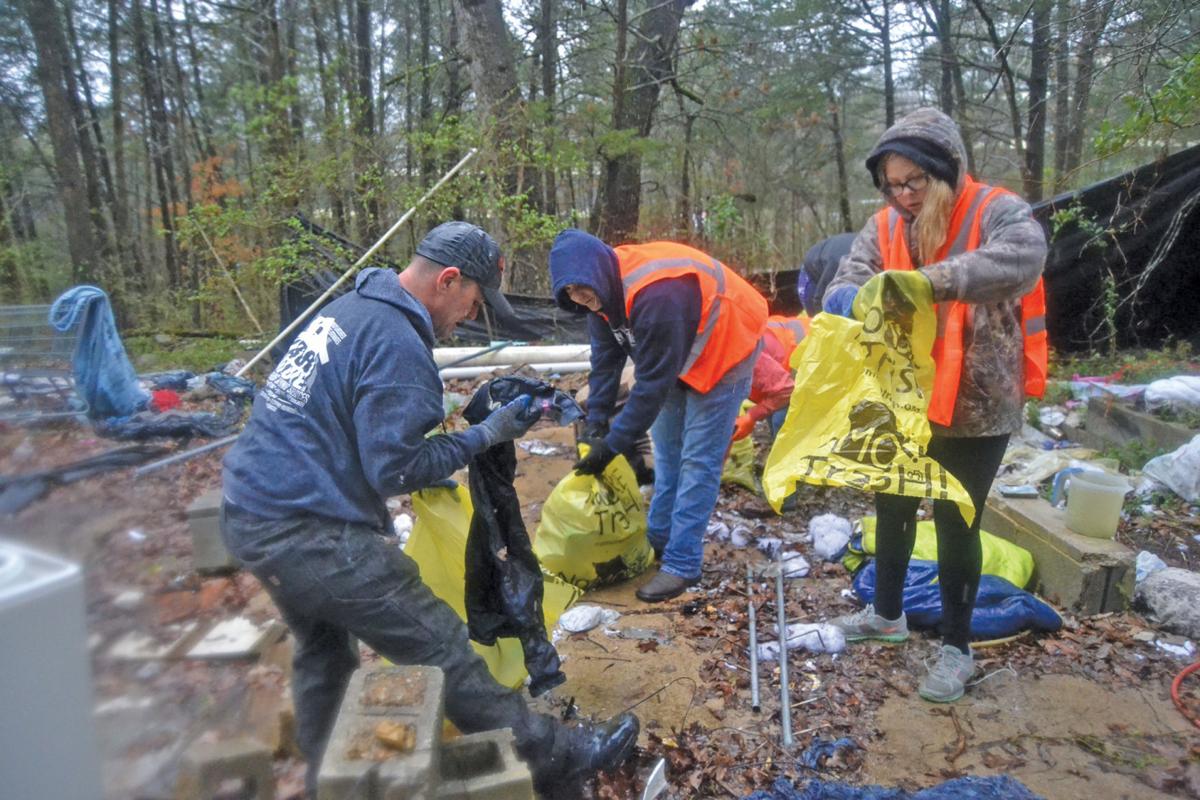 Members of Elevate Branson, the Stone and Taney County Substance Abuse Initiative and Little Flock Outreach battled the pouring rain on March 14 to come together to clean up an abandoned homeless camp in Branson and provide hand sanitizer and Bibles to anyone they met during the clean-up. 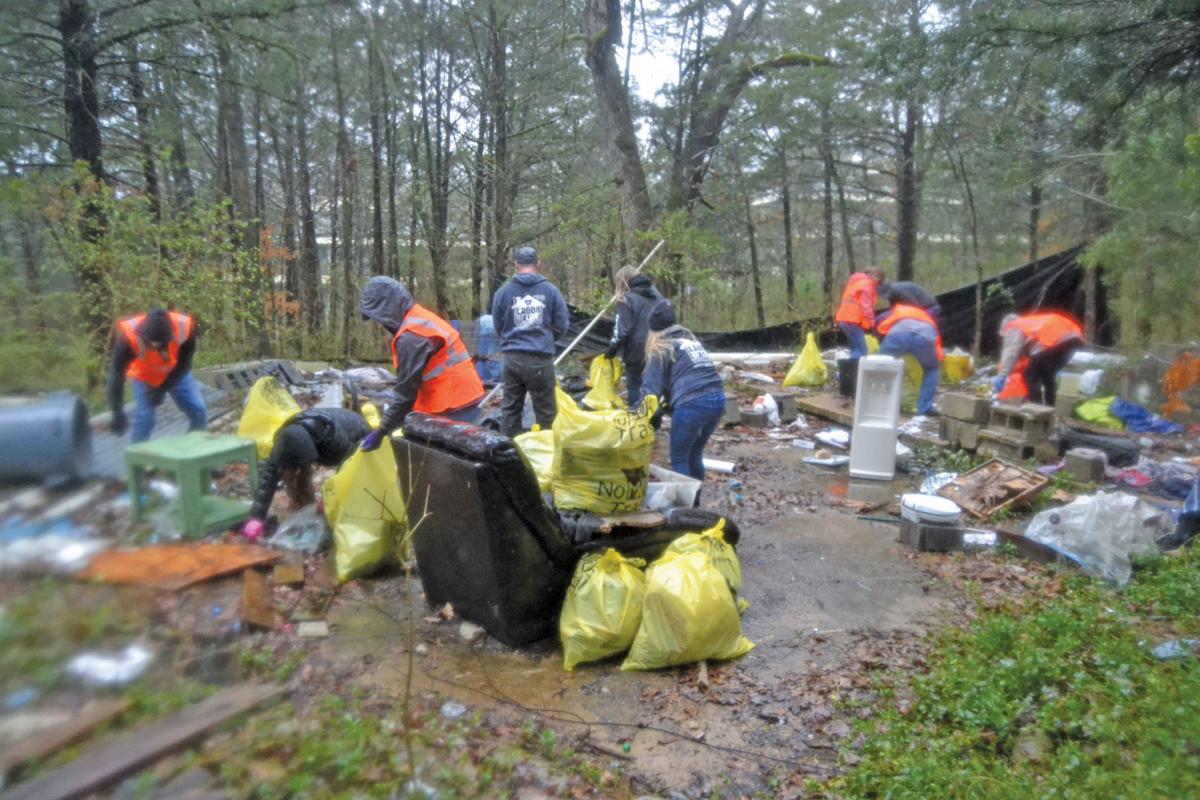 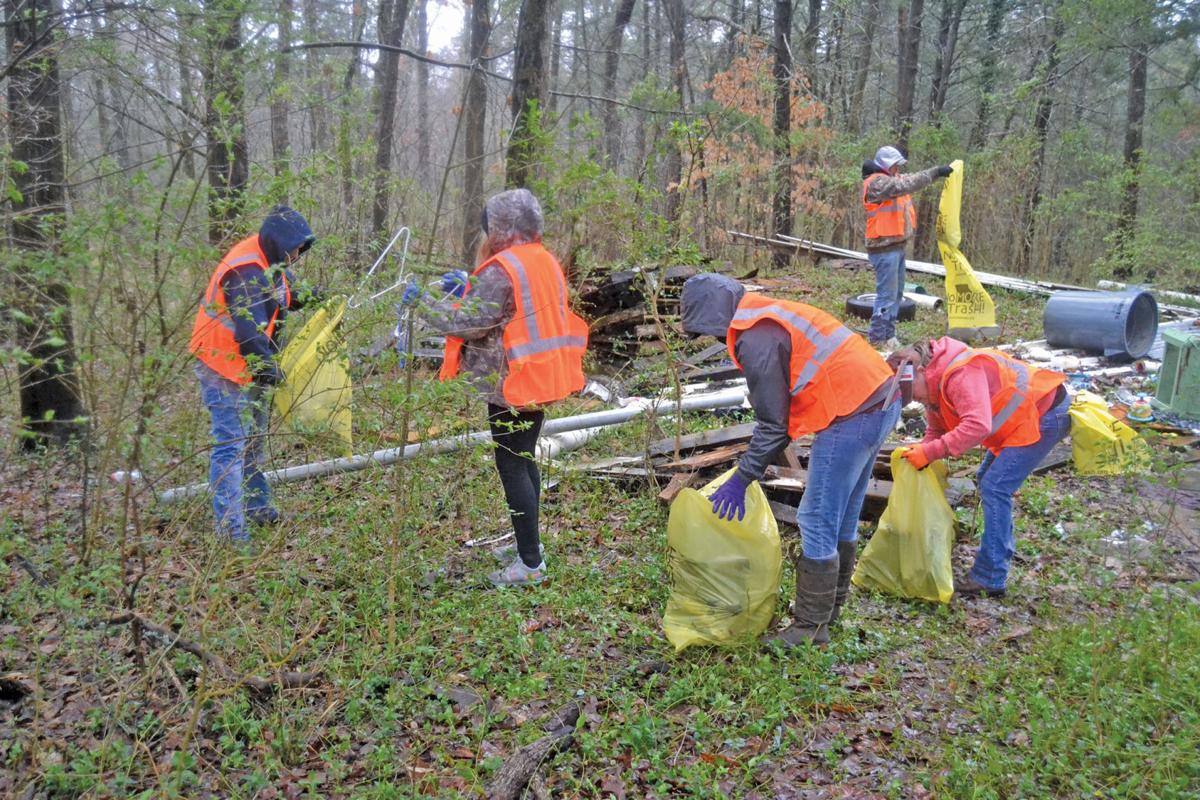 Members of Elevate Branson, the Stone and Taney County Substance Abuse Initiative and Little Flock Outreach battled the pouring rain on March 14 to come together to clean up an abandoned homeless camp in Branson and provide hand sanitizer and Bibles to anyone they met during the clean-up.

Community members from three area organizations came together over the weekend to battle the rain and clean up one of the largest abandoned homeless camps in Branson.

Unbeknownst to those driving down 76 County Boulevard, but just across the street from the Dunkin Donuts/Baskin Robbins eatery, and less than a quarter of a mile down into the woods, sits one of 19 known homeless camps in Branson.

Thanks to the efforts of community members from Elevate Branson, the Stone and Taney County Substance Abuse Initiative and Little Flock Outreach, that abandoned camp has now been cleaned and cleared of piles of trash, clothing, tattered furniture, rigged building material and much more.

Elevate Branson Community Connections Coordinator Carla Perry said that when you know company is coming over to your house, you clean up before they arrive.

Perry explained they applied the same logic to the folks planning to spend spring break in Branson, which is why they thought it was a good time to do some cleaning.

“At the poverty summit (held at the Keeter Center at College of the Ozarks) a couple of weeks ago, we were talking about collaborating, what it looks like and putting into action. So we’re putting into action and what that looks like is we’re starting with the homeless camps,” said Perry. “We’re all also in active recovery. Our community all knows what active addiction looks like, but they don’t really know what active recovery looks like. We recover, we contribute and we make a difference in our community and this is what this is right here.”

Perry added that they choose to start out by cleaning the largest of the camps, mainly in hopes of making a larger dent in the clean-up process, but also because this camp had been abandoned for a while.

“This one, there is just a lot of stuff everywhere,” Perry said. “There is nobody home. I checked with the police department and several other people that come into Elevate Branson who are experiencing homelessness, and I know this one is abandoned.”

In the short time period between them doing the census count of all the homeless camps in the area and the group returning to do the clean-up, a new camp with a tent, a tarp lean-to, sleeping bags and bags of children’s toys, had been built to next door to the abandoned camp. Perry confirmed that, since that is a newer camp and possibly occupied, they would not touch anything at that camp.

“One of the things we have decided to make a focus is doing positive things in the community as a recovery community and highlighting the positive side of recovery,” said Stone and Taney County Substance Abuse Initiative Project Coordinator Marietta Hagan. “You hear about the deaths and despair, but you don’t always hear about those positive stories and how people in recovery are really positively impacting their community.

“We are trying to come together as organizations to start doing things in the community that are visible and that people can see the benefits of getting someone into recovery and helping them along that journey. Also, it’s very therapeutic. It’s just really awesome to be out here doing something for the community.”

Synthia Hayes, co-owner of Little Flock Outreach, shared when they came out to do the census headcount and saw the need, they were excited to get started.

“We got our resources with Elevate Branson with Carla and Sink or Swim with Marietta, and with Little Flock, we just all came together. You know it’s of God, because it came easily,” said Hayes. “We know that the rain’s not going to hurt us, so we came, rain-or-shine, and we’re happy and pleased to be out here amongst our peers that have either been in it, seen it or done it, or have family members. Everybody’s a survivor. We’re just blessed to be here and just blessed to be doing this with our peers.”

Perry said that before they got started, the Taney County Health Department advised them on how to dispose of syringes and anything that could be a biohazard. The Missouri Department of Transportation also donated trash bags and vests for the team to use during the clean-up. The group also had bottles of hand sanitizer and New Testament Bibles, which were donated, to hand out to anyone they met during the clean up.

Perry said the game plan is to have more clean-up days in the future. Anyone interested in joining the next clean-up is encouraged to contact Perry at Elevate Branson.