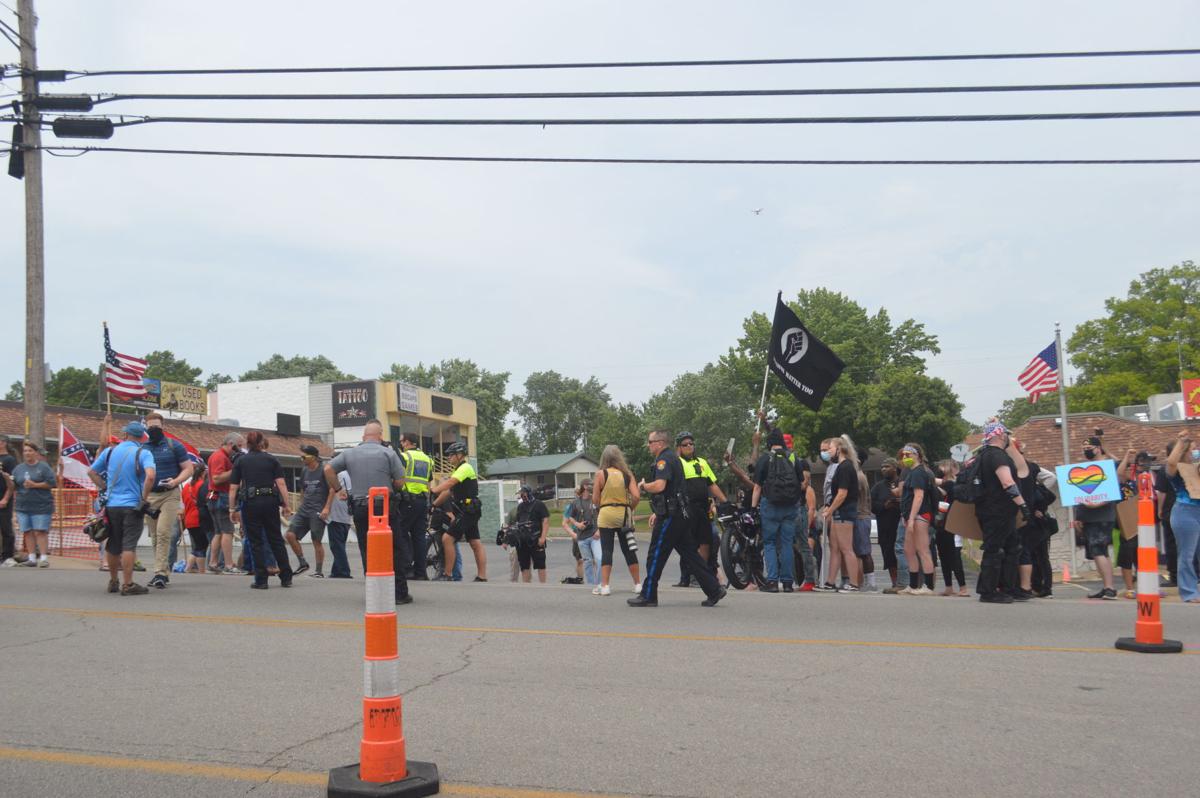 Protesters (right) and counter protesters face off along the sidewalk in front of Dixie Outfitters in Branson. This is the third week protesters have targeted the Confederate-themed store on 76 Country Boulevard, demanding it be shut down. 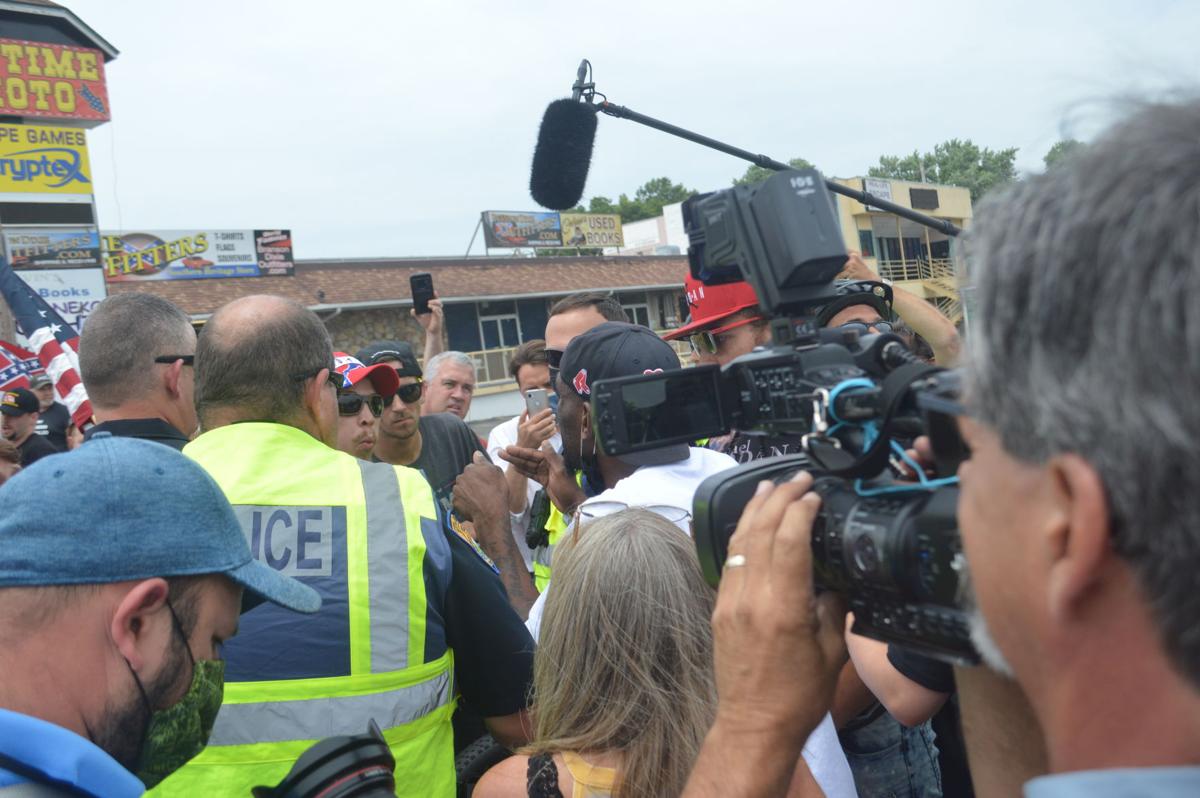 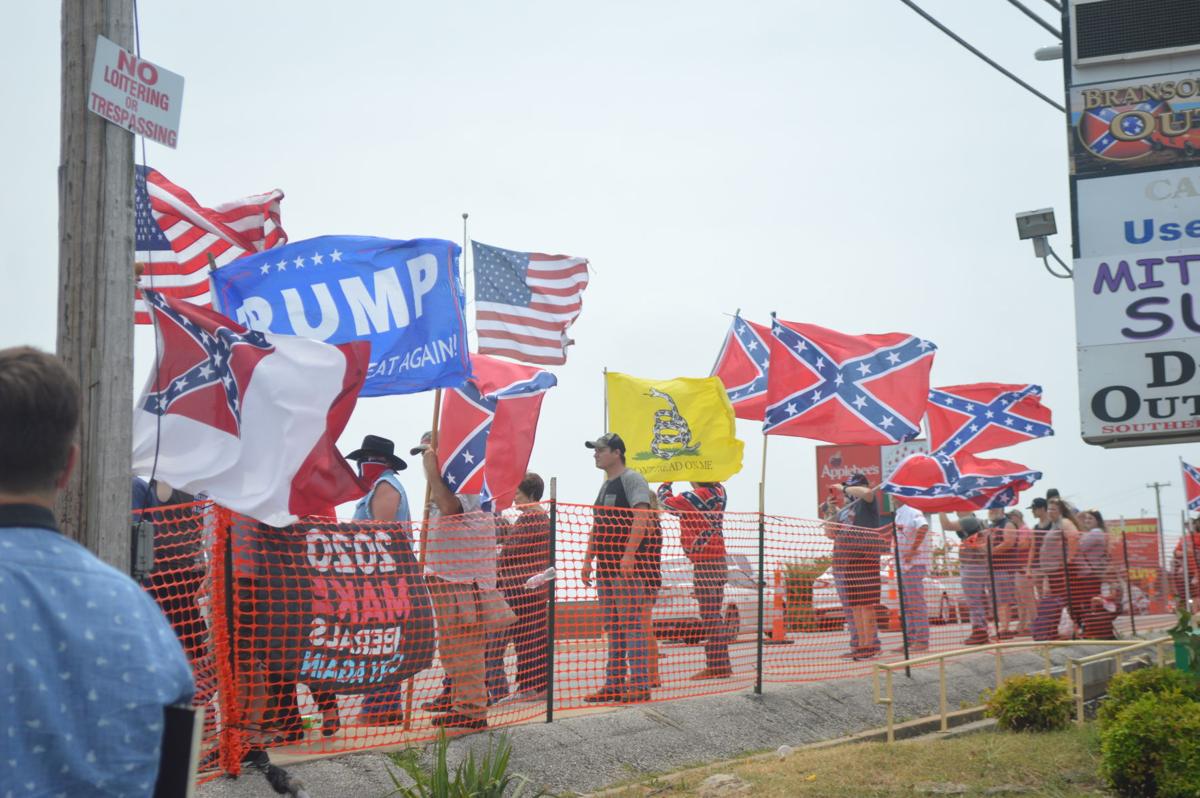 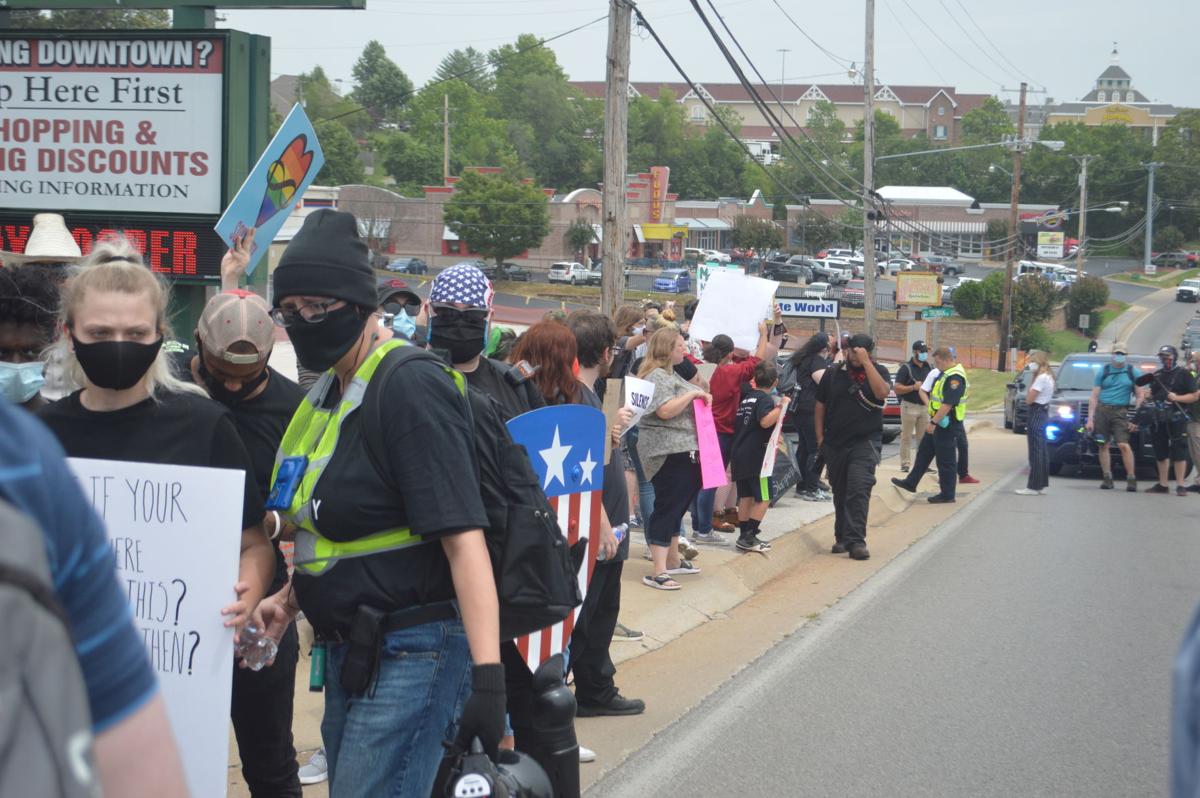 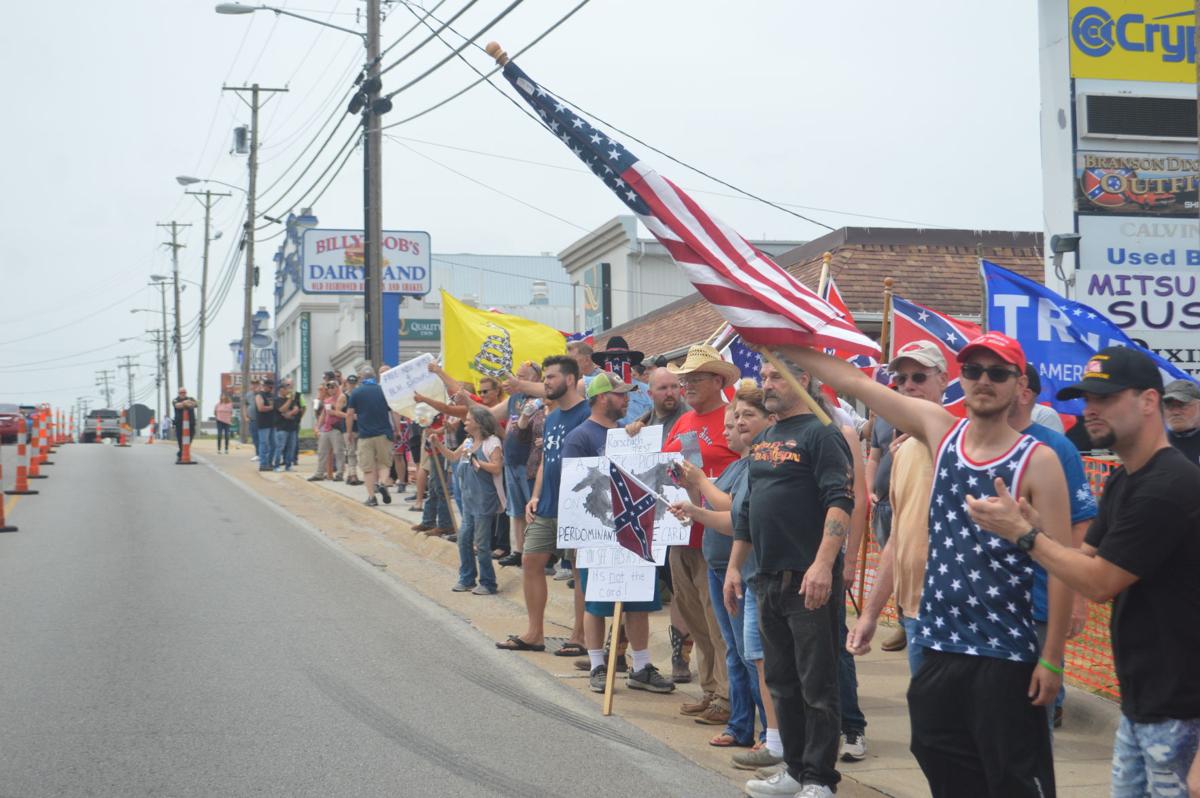 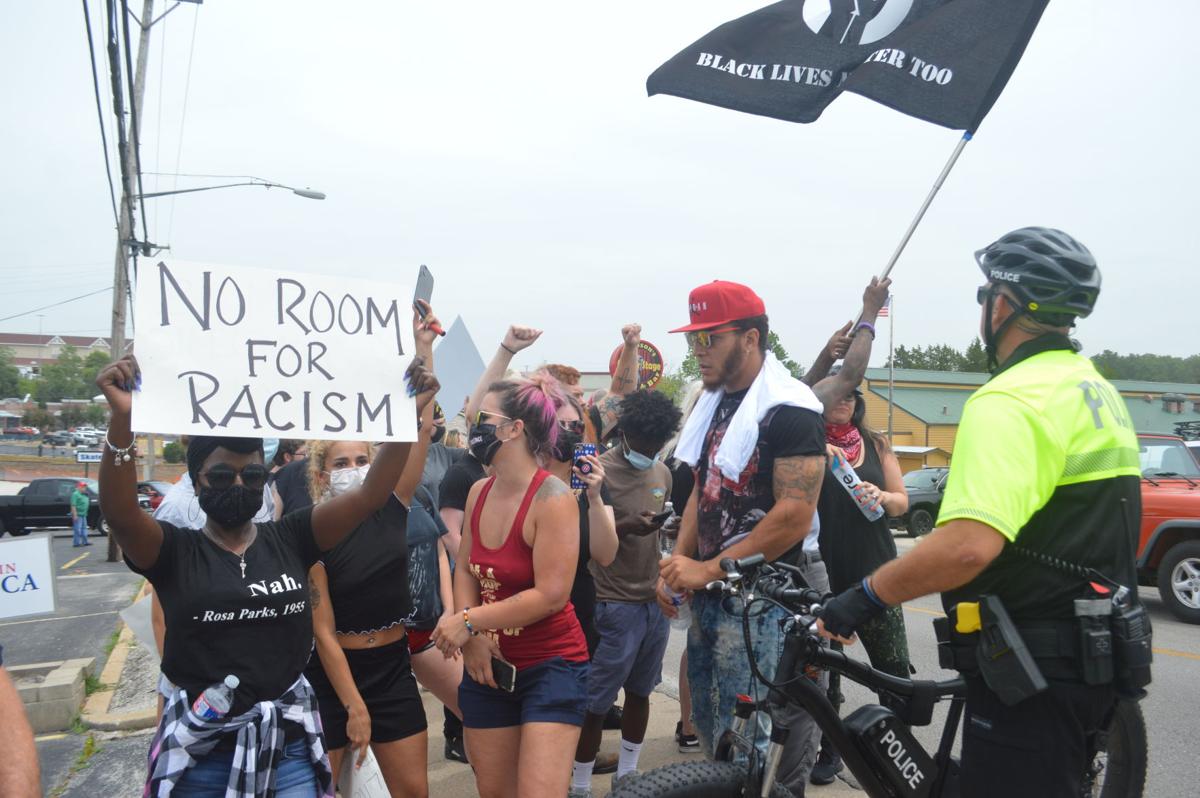 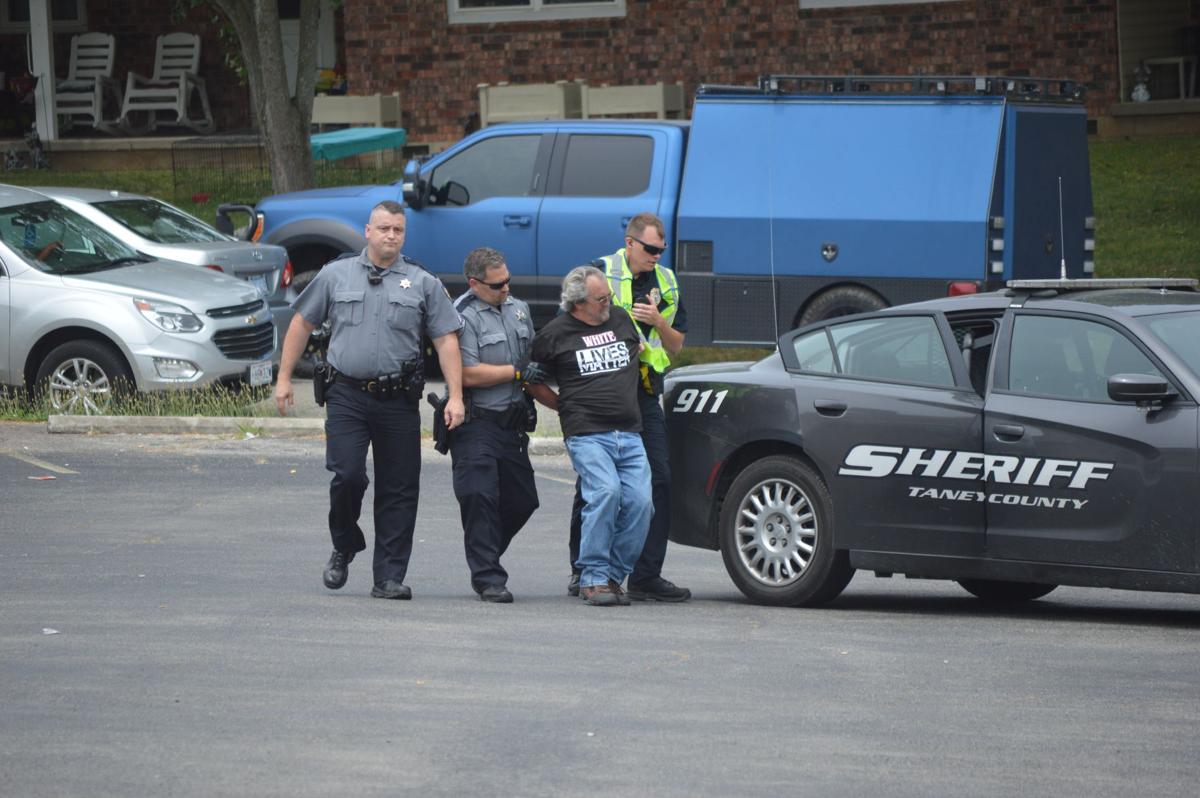 A man wearing a White Lives Matter T-shirt was taken into custody during the protest June 27.

Protesters (right) and counter protesters face off along the sidewalk in front of Dixie Outfitters in Branson. This is the third week protesters have targeted the Confederate-themed store on 76 Country Boulevard, demanding it be shut down.

A man wearing a White Lives Matter T-shirt was taken into custody during the protest June 27.

For a third weekend, protesters lined up along The Strip in Branson demanding the closure of a store that sells Confederate-themed merchandise.

About 150 people gathered to either protest or defend Dixie Outfitters, a store that sells Confederate flags, as well as Confederate flag clothing and souvenirs. A sign on the front of the store describes it as a “Southern Heritage Store.” Protesters lined up along the sidewalk on the opposite side of the street. Counter protesters lined up on the sidewalk next to Dixie Outfitters on 76 Country Boulevard.

Protesters shouted slogans such as “Shut them down,” “Black lives matter,” and “No more hate.” Counter protesters hoisted Confederate flags, American flags and Trump flags, and shouted slogan like “All lives matter,” and “Four more years.” They played music that included songs like, “The Fightin’ Side of Me,” “God Bless the U.S.A.” “The Star-Spangled Banner” and “Born in the U.S.A.”

Branson police, with some help from the Taney County Sheriff’s Office monitored the street. They set orange cone along the road to bring it down to two lanes, and they did not allow any individuals to be in the street. Despite online rumors throughout the week that 76 would be shut down by the protests, police managed to keep traffic flowing for most of the two-and-a-half hours that protesters lined the street. Traffic was stopped briefly to allow protesters to cross the street and line up next to the counter protesters. It took about five minutes to get everyone onto the sidewalk before police would allow traffic to continue.

Separated by just a few feet – as well as by several police officers and two police bicycles -- the two sides exchanged chants and some heated remarks. At one point, a man wearing a “white lives matter” T-shirt was handcuffed and taken away in a police car. After about 30 minutes, the protesters returned to the other side of the street.

This is the third weekend protesters have demonstrated at Dixie Outfitters. Two weekends ago, they started on the sidewalk outside the store and then marched downtown. Last week, they encountered counter-protesters who were gathered in the Dixie Outfitters parking lot. This week police limited all participants to the sidewalks. The parking lot was closed off. Other businesses in the same strip mall were closed.

Since last week, the store had taken down its flags and covered some Confederate imagery with banners that state “Believe in America.” There did not appear to be a Confederate flag image visible.

Later in the day, the Branson Police Department issued the following statement on Facebook:

Thank you to all area Law Enforcement agencies and the City of Branson Public Works Department that helped with today’s planned peaceful demonstration.

While there was one individual who was taken into custody, the demonstration remained peaceful and topped out at 155 people.

The Branson Police Department led an interagency task force to include various departments within the city, county, and state to ensure everyone remained safe during the event Saturday on W. 76 Country Blvd where groups of people were exercising their First Amendment rights.