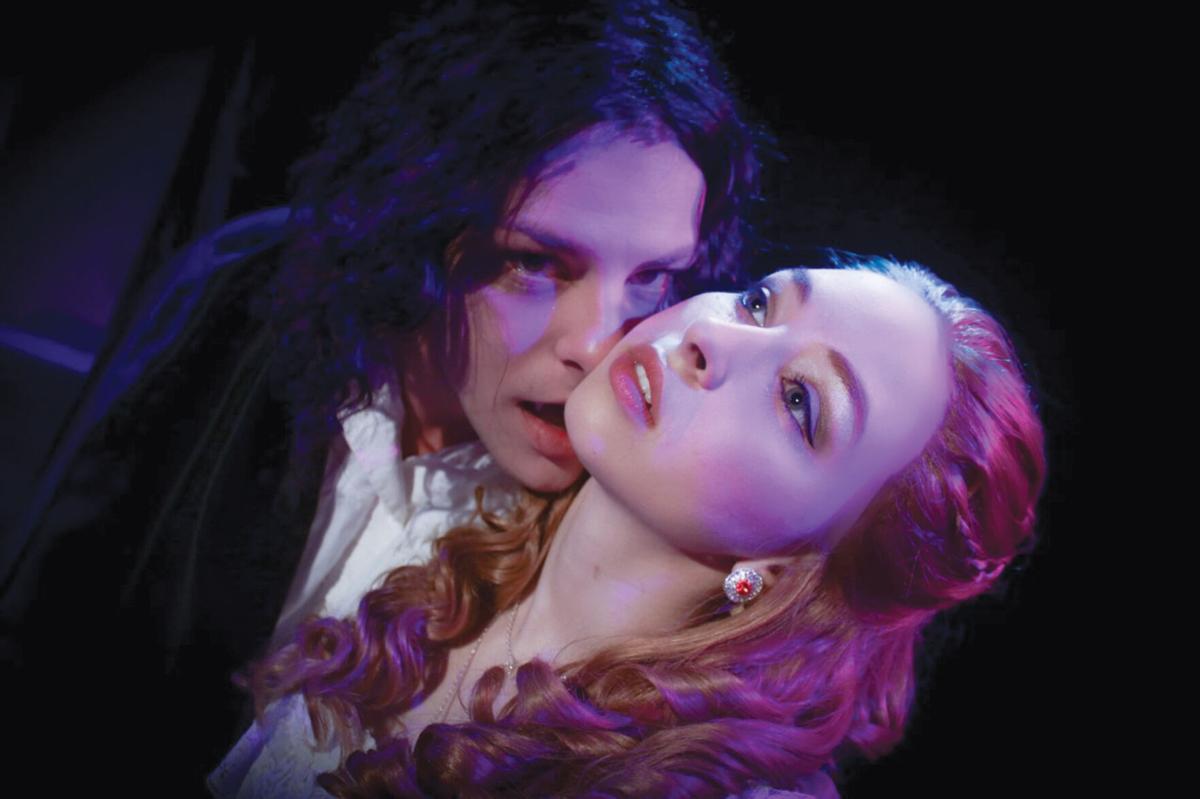 “Dracula” at the Historic Owens Theatre stars the above pictured talents of Nate Schaefer and Aline O’Neill as Dracula and Lucy respectively. 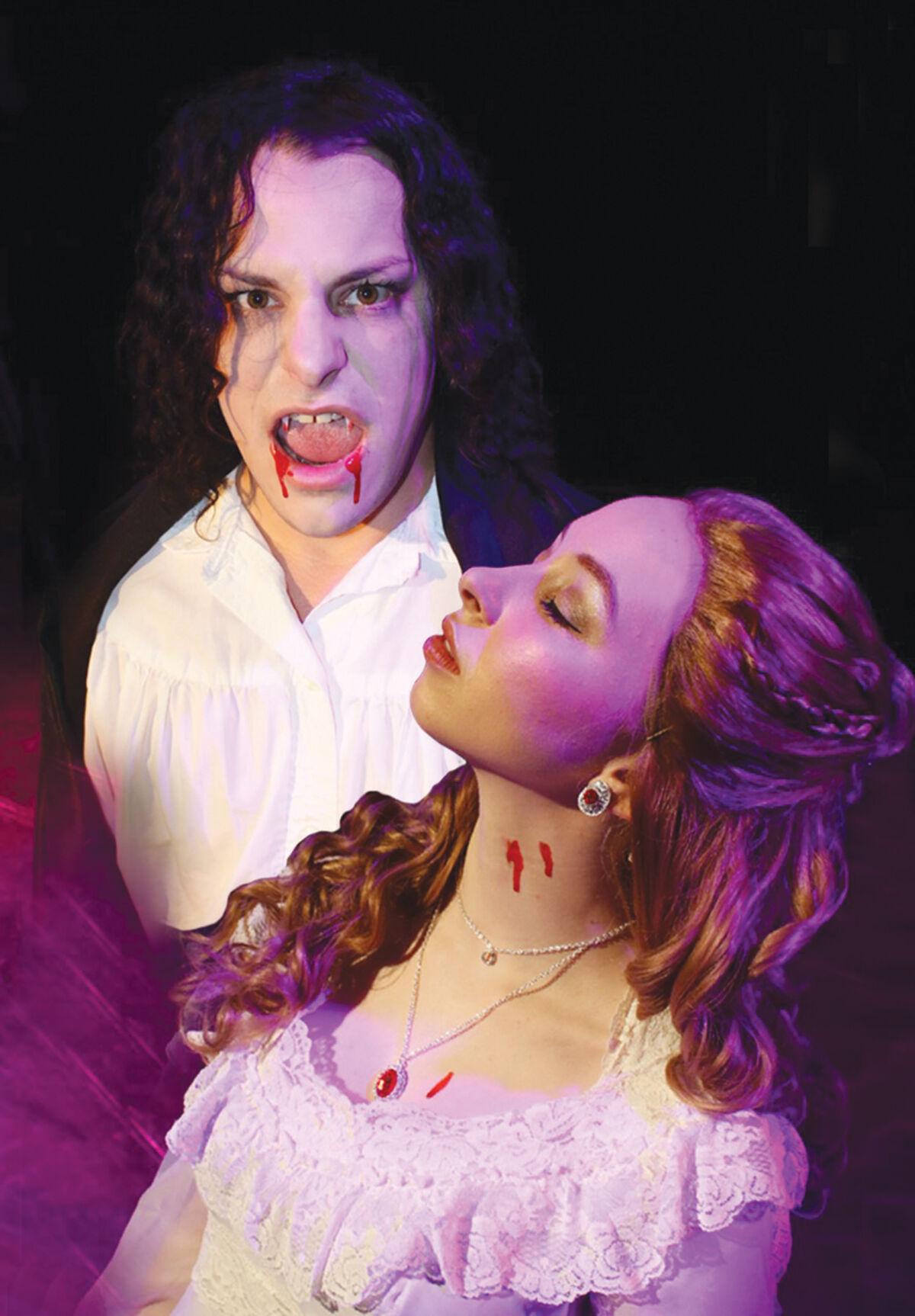 Nate Schaefer and Aline O’Neill, both of Springfield, star as two of the leading roles in the production of “Dracula” at the Historic Owens Theatre in Downtown Branson. 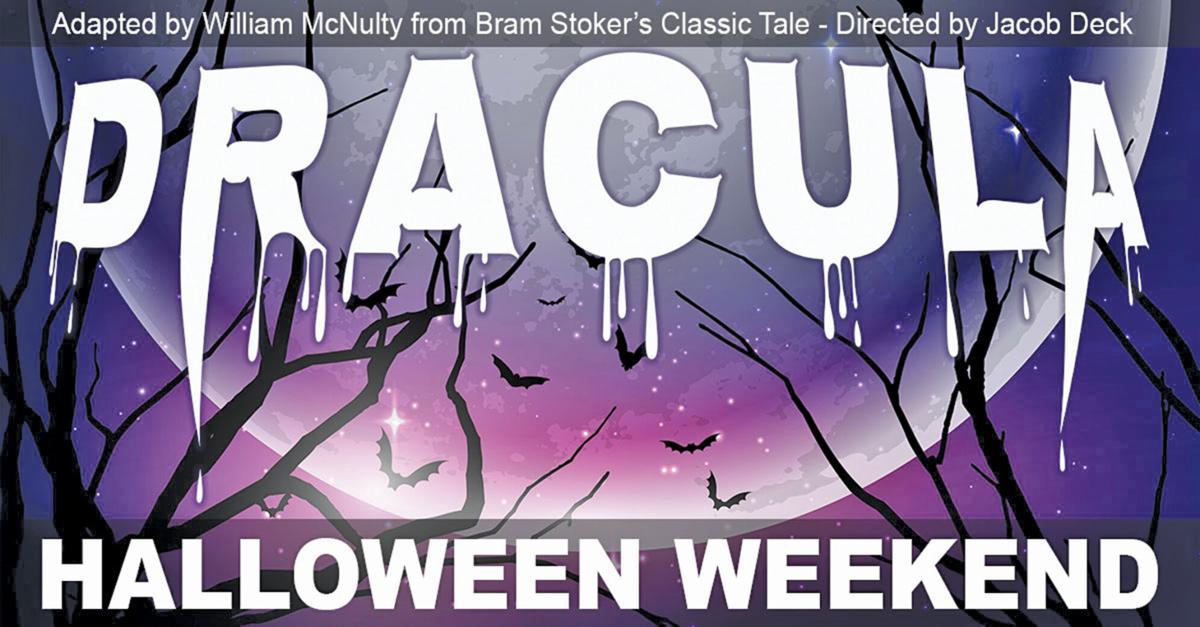 “Dracula” at the Historic Owens Theatre stars the above pictured talents of Nate Schaefer and Aline O’Neill as Dracula and Lucy respectively.

Nate Schaefer and Aline O’Neill, both of Springfield, star as two of the leading roles in the production of “Dracula” at the Historic Owens Theatre in Downtown Branson.

The Branson Regional Arts Council is promising horror fans some frightful fun this coming Halloween as they bring Bram Stoker’s classic tale of Dracula to the stage at the Historic Owen Theatre.

Outside of the recently completed run of “The Odd Couple” at the Owens Theatre, all of the remaining announced 2020 productions for the arts council were postponed to 2021 due to the pandemic. Deck, who worked on a production of “Dracula” in college, said this production only came together recently out of a conversation he had with “Dracula” Producer Kim Hale.

“We were talking about shows with smaller casts that we could bring to the Owens due to COVID and how they’ve had to cancel a bunch of shows. You know the bigger the cast, the harder it is for them to distance and work around the guidelines and things. Live theatre has been put on hold, unless you can have a smaller cast, and you can do it safely,” said Deck. “Well I brought up the idea of “Dracula,” so she took it to the board and they all talked about it. Then we decided that is what we were going to do and we went straight for it.”

Deck explained that since the arts council took over the Owens Theatre a few years ago, this will be the first time a show has taken place on the weekend of Halloween, which has people excited.

“They’ve always done a show before or after (Halloween) that’s never related to Halloween itself. And not that Dracula relates to Halloween night or anything like that. It doesn’t take place then, but people normally associate Dracula with Halloween obviously. I don’t think the Owens or anyone around the area has done anything quite as dark as “Dracula” is going to be, so I think people are excited for that.”

In order to bring his vision of “Dracula” to life at the Owens Theatre, Deck said he had to get imaginative, as the stage doesn’t allow for an abundance of moving set pieces.

“The idea of “Dracula,” to me anyway, is very abstract in a way. Whenever I think of horror and weird and spooky I think of big shapes, and not truly anything that makes sense in a way. The set, I’ve designed it like French doors straight to the back, and we have walls on the side and everything is going to be painted like a mausoleum. So even though they’re in a house at times, they’re at a cemetery at times or they’re in the forest, it will all be in the mausoleum, and we’ll change the mood of where they are for the setting with lighting.”

Deck added that the small space may be difficult to work with at times, but he believes it will also help bring the horror element of the production to life.

“People are going to be so close and intimate to the action, and you’re going to be right there with the blood and the screaming and all the scary stuff,” said Deck. “I think that the audience won’t have a hard time imagining what they’re seeing, especially since they’re so close.”

Leading the cast in the title role of Dracula is Nate Schaefer of Springfield.

“He is a wonderful actor. He does the classic Transylvanian accent and it’s so nonchalant and so easy sounding. It sounds so natural. He’s just really swayed. He’s like the perfect depiction of how you would imagine Dracula being,” said Deck. “I really like how he was very down to earth and smooth, which is how I would imagine Dracula to be.”

Joining Schaefer on stage in the role of Lucy is another Springfield resident, Aline O’Neill.

“She goes to MSU and is a musical theatre major. She’s also really, really amazing and she’s an amazing actress. (Schaefer and O’Neill) work really well together. I think that they’ve worked on a few films together actually, so their chemistry is amazing.”

Branson resident Somer Dean, who plays the role of Mina, brings the amount of horror up to another level, according to Deck.

“She’s also a very wonderful actress. There are times, and not to give too much away or anything, but there are times in the show where Mina really thrives with the horror aspect of it and Somer really brings it,” Deck said. “I get chills and jump even when we’re in rehearsals, so I can’t even imagine people coming to see the show and seeing it for the first time with her being Mina.”

“He’s pretty much playing Van Helsing to the tee like you would see in any movie or anything,” said Deck. “Like I said the cast is pretty perfect and it was very late notice that this show came to be, so I’m amazed at how quickly people jumped on the auditions. Not only did a bunch of people jump to audition, it was a bunch of people that really fit the parts, so I got really lucky with this one.”

Deck shared that their production of “Dracula” has been rated PG-13, and is probably not best for a younger viewing audience.

The novel Dracula, by Bram Stoker, was published in 1896 and has remained a classic story with many renditions. In the story, an intrepid band of vampire hunters attempt to end an ancient evil, tying together Carpathian folk tales of the Nosferatu and the historical Voivode Vlad Tepes, known as Dracula. Stoker imagined a being of immense but evil cunning, a shapeshifting predator, and a power-hungry conqueror from an earlier age, according to a press release.

This production of Dracula is closest to Stoker’s imagination: he is a beast with two personalities, one all primal bloodlust, the other a time-displaced medieval dictator who lives to enthrall, enslave, and control. In the play, Professor Van Helsing and his brave comrades must hunt down and destroy the profoundly evil Count Dracula. But the Count is exceedingly resourceful, employing superhuman strength, psychic powers, and shape-changing to confound and frustrate his antagonists. Culminating in a wild and shocking confrontation between the King of Vampires and those who would rid the world of him, this adaptation is an action-packed, blood-soaked retelling of Bram Stoker’s classic tale of horror, the release stated.

Tickets to “Dracula” are on sale now. Admission for adults 18 and older are $16.95 and youth ages 17 and under are $11.45. All proceeds from tickets sales benefit the Branson Regional Arts Council.

For additional information call the Owens Theatre Box Office at 417-336-4255 or visit bransonarts.org