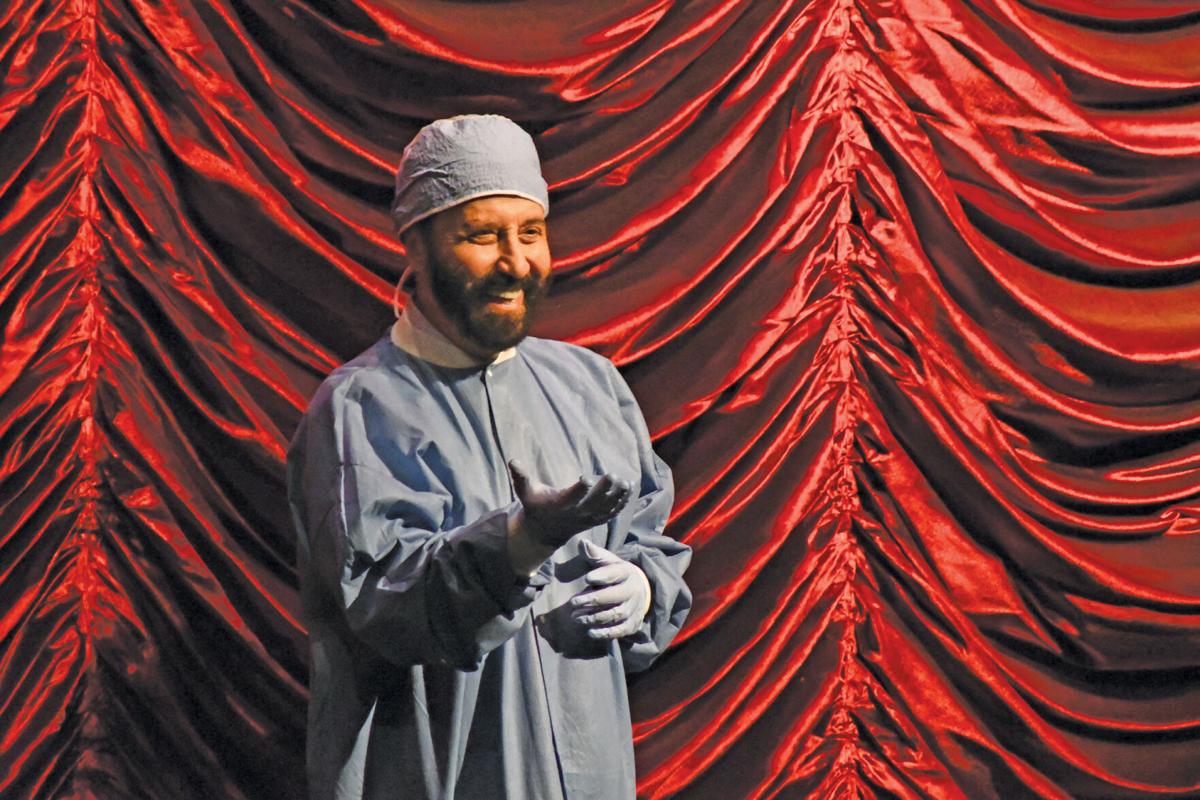 At his new show “Laughter Vaccine Kills COVID-19,” Yakov Smirnoff begins his show by joining the audience in his theatre dressed in full doctor scrubs. When he first walks out on stage his outfit ensemble also includes a face mask and face shield. 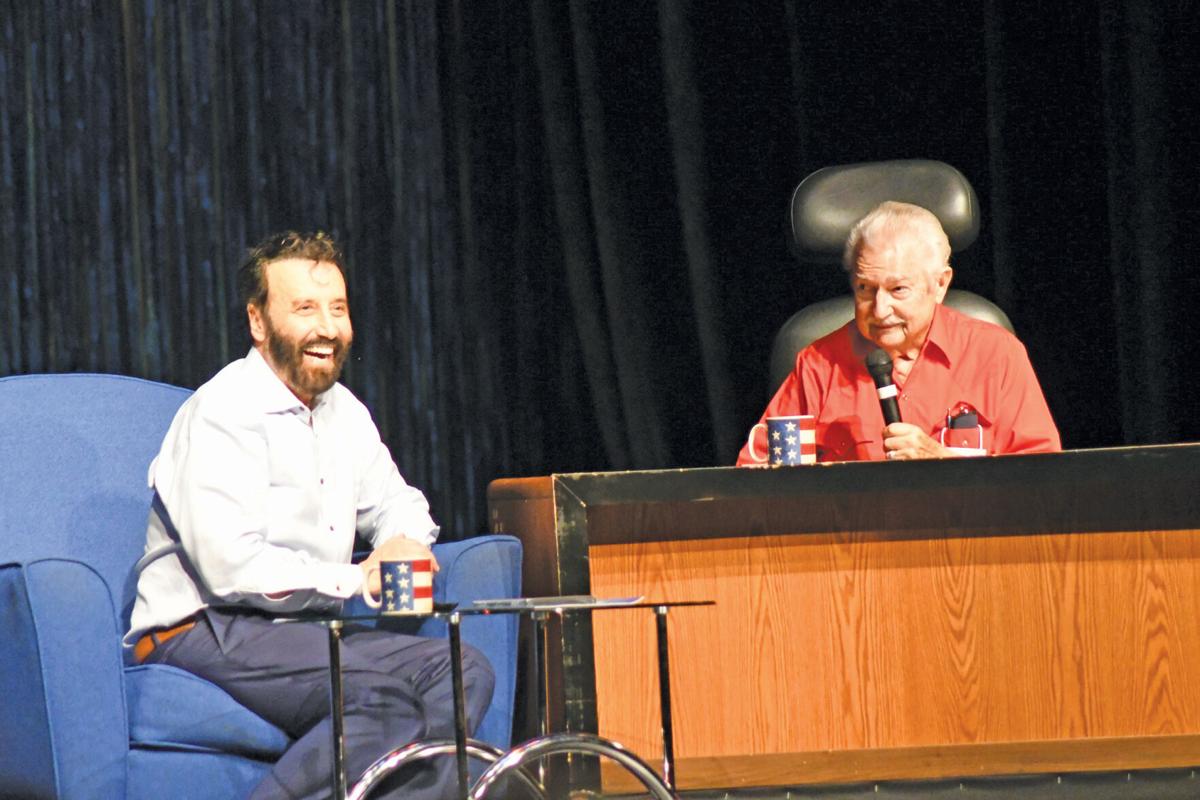 An audience member comes onto the stage as the host of a new TV show and welcomes Yakov as their first guest. 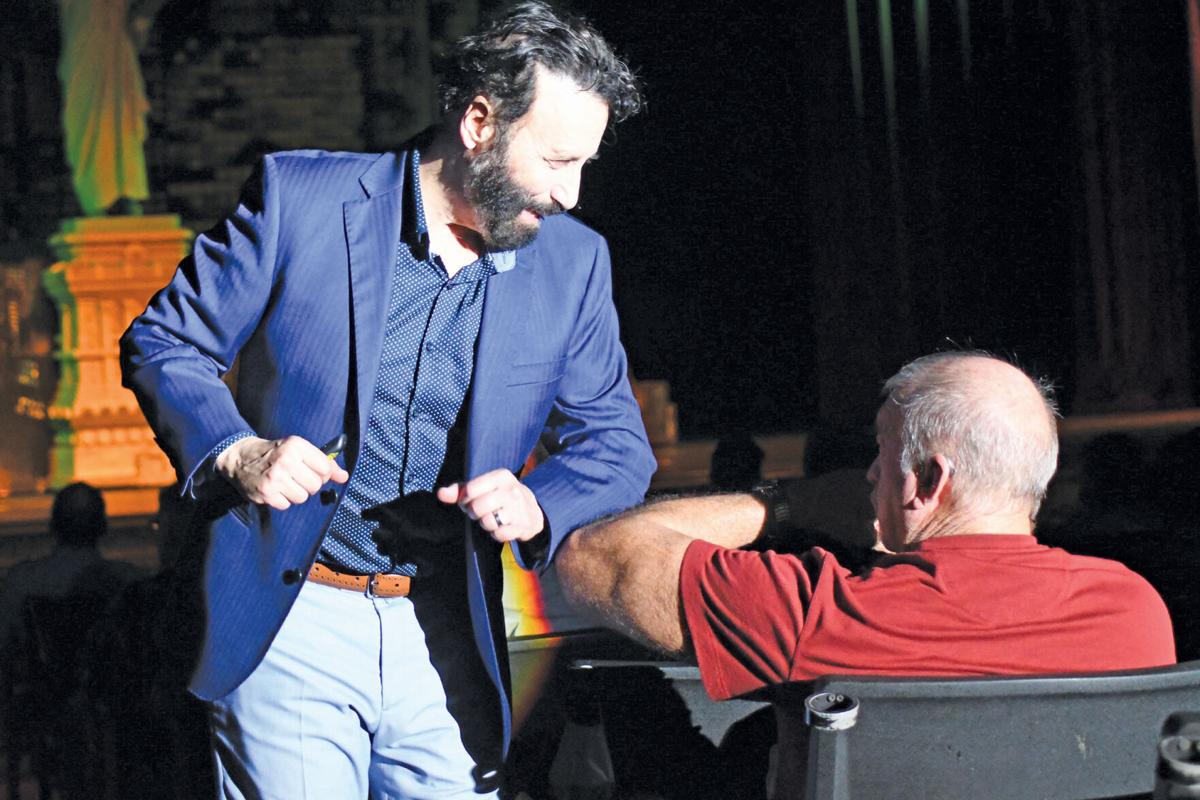 Yakov comes down to say hello to his audience by bumping elbows with those comfortable with the greeting.

At his new show “Laughter Vaccine Kills COVID-19,” Yakov Smirnoff begins his show by joining the audience in his theatre dressed in full doctor scrubs. When he first walks out on stage his outfit ensemble also includes a face mask and face shield.

An audience member comes onto the stage as the host of a new TV show and welcomes Yakov as their first guest.

Yakov comes down to say hello to his audience by bumping elbows with those comfortable with the greeting.

Everyone’s favorite Russian Comedian Yakov Smirnoff has returned to Branson, and he’s offering a cure for the pandemic blues with his new show.

On Oct. 6, Smirnoff opened with his new show “Laughter Vaccine Kills COVID-19” at the Yakov Smirnoff Theatre. However, this isn’t the first time Smirnoff has been in Branson this year.

When COVID-19 first struck the United States, Smirnoff said he and his wife knew that they wanted to be in Branson during this pandemic, so earlier this year they left their home in California and traveled to Missouri.

“Once we were here, we did the quarantine of 14 days,” said Smirnoff. “Then we’re going, ‘Now we’re here. Going to California not going to happen. So what are we going to do? Well let’s do the show!’”

Opposed to performing at his own Branson theatre, Smirnoff chose to take his show to the 76 Strip and set up shop at the Caravelle Theatre. Smirnoff explained that he went to the Caravelle in hopes of attracting more families to his show.

“We did a summer show of 48 shows,” said Smirnoff. “It wasn’t a big home run, but at least, and what’s amazing about this to me, that at least we’re working. Vegas is not working. Broadway is not working. Nobody really is working. We are. So that’s a unique spot.”

Following the end of his summer run at the Caravelle, Smirnoff said they traveled back to California, but not before they made a quick trip to Turkey.

“We went to Turkey before that to meet with my wife’s family. We were in Turkey for two weeks and it was great. No masks required. The staff was wearing masks, but not guests. Beach, hotel, anywhere, no masks, which feels like freedom to me.”

When they returned to their home in Malibu, Smirnoff said he felt it had become quite easy to compare California to the Soviet Union.

“The governors and everybody’s enforcing certain things and each person becomes, no matter who they are, they become informers on other people who are not wearing a mask the right way or you’re jogging without a mask, you can’t do that. You’re on the beach without a mask, you can’t do that. They’re going to penalize you, and they’re going to bust you. So the fear factor of California is getting worse and worse and worse, and they don’t even know it.”

Smirnoff added the fear factor continued to increase in California when he joined a couple of friends for dinner.

“I go to dinner with a couple of friends of mine, and we’re in Santa Monica in a nice fancy restaurant, but you can only sit outside. No inside seating,” said Smirnoff. “All the sudden this motorcycle, we didn’t know it was a motorcycle, but it sounded like machine gun. Like ‘Ba-ba-ba-ba-ba-ba.’ I looked around and everyone around laid down on the floor, because everyone, including me, had an instant reaction. Everybody is in such fear that they hit the floor.

“So after that, I was like, ‘You know what, Branson’s really nice,’” Smirnoff said with a chuckle. “We were looking at each other going, ‘Do we really want to be in California at all?’ My wife and I both said, ‘No.’ So we got rid of our home, got everything on a truck and moved here permanently.”

In theme with the ongoing pandemic, Smirnoff has chosen to title his new show “Laughter Vaccine Kills COVID-19,” which he said features a ton of fun new material and a lot of improvisation. Smirnoff, who has his doctorate degree in Global Leadership from Pepperdine University, explained that at one point in the show he holds a mock press conference after learning that he’s on the shortlist of doctors to join President Donald Trump’s new Coronavirus Taskforce.

“I come out and I’m doing my segment on what might be second wave and how we’re supposed to behave. Then I open the floor and everybody in the audience becomes a member of the media. We don’t have anything planned or staged. It’s totally improv fun,” said Smirnoff. “The most interesting thing to me is that we are on the same wavelength, and it seems like this audience associates and understands what I stand for without me making any political statements.”

Now that Smirnoff has returned to Branson permanently, he confirmed his excitement to be back on stage performing at his own theatre.

“It feels good to get back. It’s my home. This is it. It’s interesting. I don’t know what this process is. I don’t know if it’s the circle of life. Sometimes the grass is greener on the other side, but really the grass greener where you water it. That’s when it’s greener. That’s what gives me chills. That’s what I feel like, I’m back. I want to water this.”

During the month of October, Smirnoff is also running an area appreciation special by offering $10 tickets to locals.

“We really want to get the locals to come,” said Smirnoff. “I’m encouraging that they come and laugh their Yak-off. This is true facts. This is science and you can look it up easily. When people are laughing that’s the most amount of a boost your immune system can have. I mean you can work out, but it’s still not as good. When you’re laughing all the pheromones that are flooding your brain are creating a flood of this good positive emotion. That’s the best way to fight any virus, because ultimately it’s your immune system that’s going to kick it or it’s not. That’s why I’m saying come here and get a dose of laughter vaccine.”

Smirnoff’s new show is scheduled to play every Tuesday, Thursday and Sunday at 8 p.m. through Dec. 6.

For tickets and additional show information, visit yakov.com or call the box office at 417-336-3838.