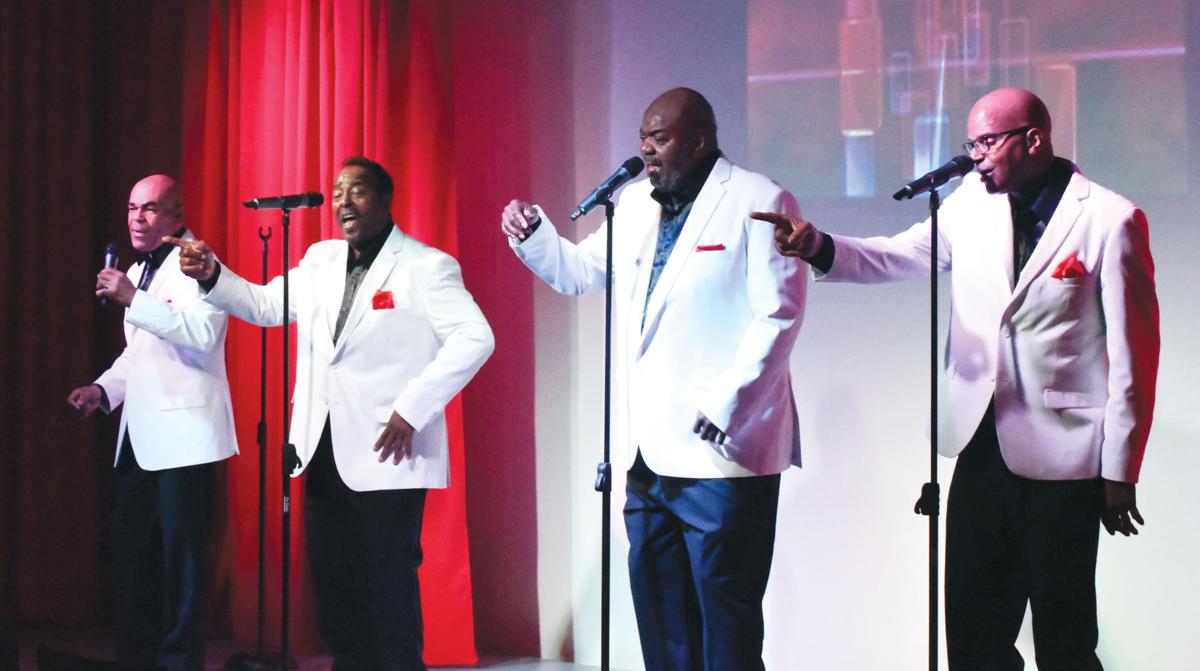 Derek Ventura, from left, Doc Hutchinson, Earl Lee and Andre Shepard will headline the Ruby Room’s “Dancing in the Streets - a Motown revue” when the venue opens Monday at the Majestic. 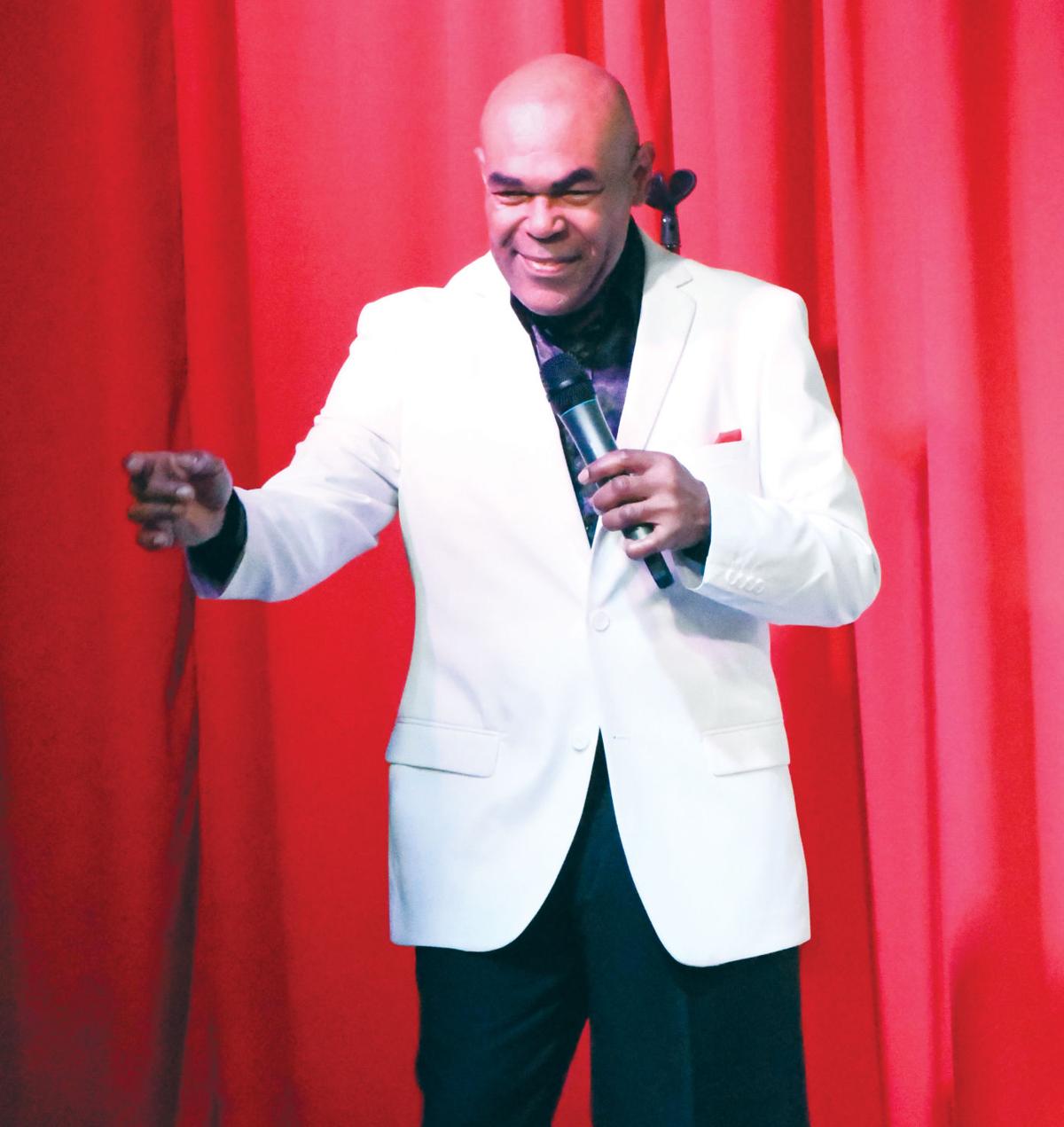 Derek Ventura and the Ruby Room at the Majestic will open Monday evening.

Derek Ventura, from left, Doc Hutchinson, Earl Lee and Andre Shepard will headline the Ruby Room’s “Dancing in the Streets - a Motown revue” when the venue opens Monday at the Majestic.

Derek Ventura and the Ruby Room at the Majestic will open Monday evening.

One of Branson’s newest venues, the Ruby Room at the Majestic, called a “showroom for rhythm & blues in Branson,” is set to open Monday featuring two shows,  “Dancing in the Streets – a Motown Revue” and “Doo Wop & the Drifters.”

This new venue is the passion project of local performer Derek Ventura, a former member of the Drifters, and his wife Kay.

“In the four years since I moved here from New York City, if I wanted to go see a blues band or a jazz band, I’d have to go to Springfield or beyond,” Ventura said. “Even though we’ve had the shows at the Hot Hits Theatre, where my ‘Drifters’ show was for the past three seasons,” I just felt Branson deserved a showplace for all things rhythm and blues.”

Ventura said he originally had his sights set on a “Strip” venue, but shortly after the Johnson family announced they were moving “The Johnson Strings” the Americana Theatre, he made an inquiry about their former space, the Majestic Theatre.

“Unfortunately, Jonathan Edwards, who is a friend, and his ‘Absolutely Country Definitely Gospel’ show had already called, so we missed out on it, but we do wish them well because they’re our neighbors now,” Ventura said. “However, the owner informed me at the time there were two other spaces in the building.”

According to Ventura, the empty “as is” space that would become The Ruby Room was a far cry from what it is today. The venue has been fully remodeled with new lights, sound equipment, paint, a concession area, stage, throwback seating and of course, a “Ruby Red” floor, which gave the place its name.

“This has been a family affair between myself and my wife Kay, who is an interior designer, and my brother-in-law, who was essentially the contractor,” Ventura said. “It took us about five months to get everything done and ready to open.”

Because of the pandemic, Ventura and his cast weren’t able to open on April 1 as they originally intended.

“If we would have had to launch on April 1, the audiences would have definitely seen some missteps,” he said with a laugh. “We would have been ready to open, but this virus and pandemic has been a curse, but it’s also been a bit of a blessing to allow us more time in rehearsal for us to work the kinks out.

“Plus since all the sound equipment is new, it was great for my sound engineer to have extra time to work everything out.”

As far as the Ruby Room productions go, with several other “Motown-based” shows in the area, Ventura said he wanted to make sure “Dancing in the Streets – a Motown Revue” was as different as possible.

“I wanted to differentiate as much as I could, so ‘Dancing in the Streets’ has a plot line that runs through it,” he said. “This show tells the story of how a man in the 1960s borrowed $800 from his family and started an empire called Motown. Out of the hundreds of acts in that empire, only eight of them did he make superstars out of, and they were Smokey Robinson and the Miracles, the Four Tops, the Jackson Five, Michael Jackson, Diana Ross and the Supremes, the Temptations and Stevie Wonder.

“So we’re going to tell his story and at the same time, showcase the greatest hits of those top eight acts.”

Ventura said the show will incorporate videos, as well as stories and behind the scenes fun.

“My concept was for this to be entertaining and educational,” he said. “Everyone has a favorite Motown song, but they may not know the origin, or sometimes, the artist that made it a hit.”

Speaking of artists, Ventura has tapped three local favorites to be a part of the cast. The “Doo Wop & the Drifters” show featuring the trio of Ventura, Earl Lee and Doc Hutchinson, while the “Dancing in the Streets – a Motown Revue” will feature Ventura, Lee, Hutchinson and Andre Shepard.

“The cast for these two shows ... are the ‘crème de la crème’ of the rhythm and blues performers in town.” he said with a smile.

When the Venturas announced the Ruby Room would open, a release stated they wanted to “create an atmosphere that falls somewhere between a theater and a lounge,” so it stands to reason “adult beverages” will be available for anyone who wants to imbibe.

“We’re doing beer and wine, and we will have liquor, but we won’t be pouring shots,” he said. “Everything will be served in the single serving bottles, which will help us cut down on service times.”

Even though Ventura and company are looking forward to finally getting open, that doesn’t mean they don’t have an eye on the future.

“We’re starting with ‘The Drifters,’ which is a 50s show, and the ‘Dancing in the Streets,’ which is more based in the 60s, so next season, I’ll have a 70s show to go along with them,” he said. “Also, it is also my intention for next year to have a jazz night with live musicians and a Billie Holiday-type of singer up there.

“We’ll also have a blues night, with live blues musicians. Basically anything you have to go out of town for, that’s what we want to have (laughs).”

“We’re trying very hard to be a show and venue we would love to go out and see,” Kay Ventura added.

“Branson isn’t just for the older folks, or the country-western music lovers as some may assume,” Derek Ventura said. “It continues to be a great family friendly vacation destination that continually caters to all age groups, nationalities, and ethnicities who love a wide variety of different music genres.”

The Ruby Room is located on the third floor of the Majestic and seats 80 people.

Showtimes for “Dancing in the Streets – a Motown Revue” are 7:30 p.m. Monday, Tuesday, Friday and Saturday, and 7 p.m. Wednesday and Thursday for  “Doo Wop & the Drifters.”

Visit therubyroomatthemajestic.com, as well as their Facebook page for more information.