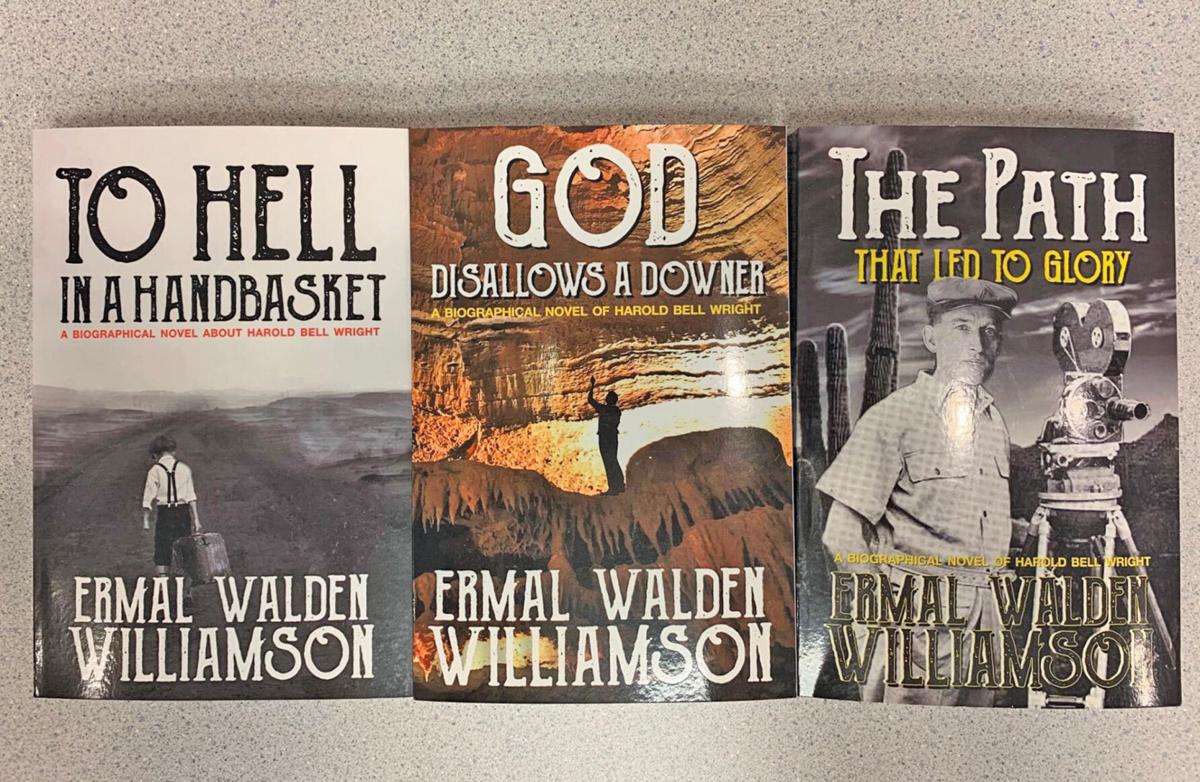 Written over a period of 17 years by Ermal Walden Williamson, “To Hell In A Handbasket,” God Disallows A Downer” and The Path That Led To Glory” tell the life story of author and preacher Harold Bell Wright. 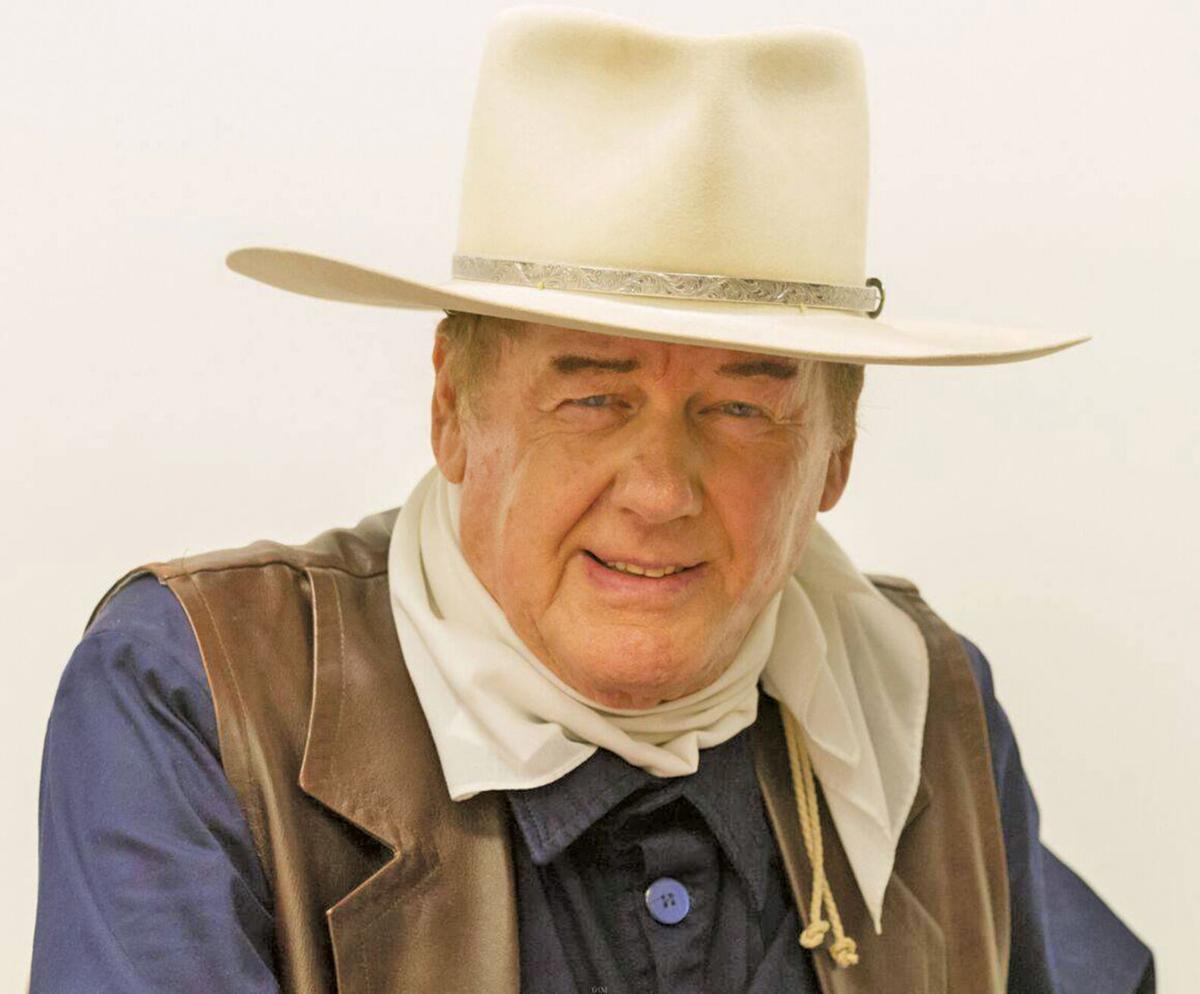 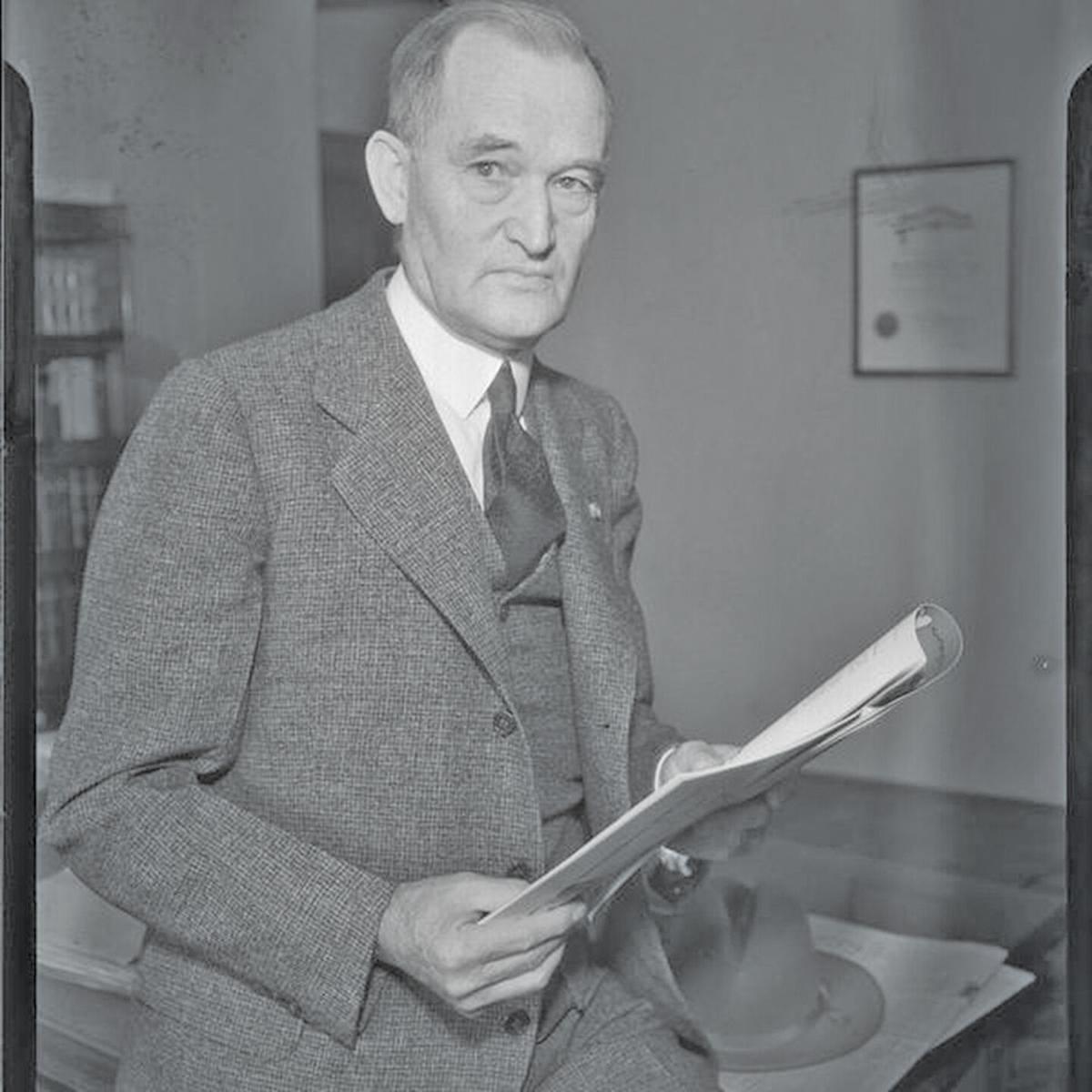 Harold Bell Wright, the author of “The Shepherd of the Hills” and inspiration behind Williamson’s novels.

Written over a period of 17 years by Ermal Walden Williamson, “To Hell In A Handbasket,” God Disallows A Downer” and The Path That Led To Glory” tell the life story of author and preacher Harold Bell Wright.

Harold Bell Wright, the author of “The Shepherd of the Hills” and inspiration behind Williamson’s novels.

A former Branson entertainer and author is giving folks the chance to learn the full life history of the man who helped to put the Ozarks on the map, Harold Bell Wright.

Ermal Walden Williamson, a longtime John Wayne Impersonator, has recently completed his trilogy of biographical novels dedicated to the life of Wright. Williamson said the first book in his series, “To Hell in a Handbasket,” starts out by diving into the life of the child who would one day grow up to write 19 different novels, including “The Shepherd of the Hills.”

“He is a 12-year-old kid that goes out into the world and forgets all about schooling,” said Williamson. “His mother died on him when he was 12 years old, and he’s on his own and nobody wants him. He grows up riding freight trains wherever he goes. He’s a hobo. He goes into the hobo jungle and learns hard knocks and almost gets killed several times.

“How did he survive? Who took him in? Beautiful story. Each one, each episode is a story in his life. It tells the total story.”

The second book in the series, “God Disallows a Downer,” follows Wright’s journey as an author and how his most respected novel “The Shepherd of the Hills” came to be.

When he set out to write these stories, Williamson said, one of the questions he hoped to answer for himself, as well as for others, is how Wright managed be the first American writer to sell a million copies of his first novel, “That Printer of Udell’s.”

“You’ll never believe how he sold a million copies of his first book. We’ll the way he did it was, a young boy that he met in college introduced him to his father and a gentleman from England … They take (Wright) under their wing, because they like his story. They fall in love with his ability to want to do God’s will,” said Williamson. “The way he did it is through Sears Roebucks. They had a 500-page catalog. His book is the first and only one to be advertised in it by these two gentlemen. … All the sudden, he finds himself book signing at – where? Sears Roebucks – because people are buying his books and he can’t believe it. That’s how he sold that many copies.”

The final novel in the series, “The Path That Leads to Glory,” partially follows Wright journey in Hollywood bringing his writing to life on the big screen.

Williamson explained that his interest in Wright, his novels and his life story can be traced to his own 30-year career as a John Wayne and Gary Cooper impersonator.

“(Wright’s) book called “The Winning of Barbara Worth” took place in El Centro, California. Gary Cooper was an extra (for the movie),” Williamson said. “Well the third lead didn’t show up, so (Cooper) got the part. Because of that, he became a super star. The reason he got the part is because he and Harold Bell Wright looked a lot a like. Harold Bell Wright was just as skinny as Gary Cooper, he rides horses and he loves to be the cowboy. That was his whole life story.”

Williamson’s connection to Wright continued by way of The Shepherd of the Hills.

“He made three pictures of Shepherd of the Hills and a fourth one with John Wayne. John Wayne was on the set of the Hollywood Studios doing interior shoots when Harold Bell Wright went to visit him. This is what got me interested in the man,” Williamson said. “He told John Wayne ‘You’re going to find God’s calling and God’s calling is going to make you a super star’ and John Wayne said, ‘No way. I’m going to be an actor.’ But Wright said, ‘No you’re going to be superstar. I can tell you right now,’ because he’s watching him act. The two became great friends and he helped John Wayne get started. He discovered Gary Cooper. All these things. He never let a moment go idol.”

On top of following Wright’s journey as a child, an author and a filmmaker, Williamson said his books also visit Wright’s time as a preacher and a speaker, as well as his personal life.

“It’s a romantic book, too, because it tells how he met his first wife and his second, too. He was married twice. It tells a very powerful story of a man that does not believe in divorce and explains what happens,” Williamson said. “He finally had to get a divorce because she was always saying, ‘You were born to be a preacher, be a preacher.’ He says, ‘No I was born to be a writer, because I can put more into a book to reach millions of people.’”

Williamson said putting together these three novels has been the combination of a 17-year process.

“We started off with the premise of doing one book, and that was it. By the time we got through with our research, we went all the way to Rome, New York and all the way to El Centro, California,” said Williamson. “All the things you would want to know about Harold Bell Wright is told in these three books.”

Williamson added that a lot of credit goes to Wright’s distant cousin, Christine Tyrlik, who authored “Harold Bell Wright and his Wright Settlement Cousins” and assisted with his research.

“People want to find out about Harold Bell Wright. The true story. That’s why I wrote those there,” said Williamson. “There are no swear words in it. Nothing but positive thinking all the way through. It tells of a person down on his luck with no where to go can make it in this life. It’s an inspirational story.”

Williamson currently lives in Arizona with his wife Paula, who also helped conduct research for the novels. Together, they performed in Branson for many years as John Wayne and Patsy Cline, American’s Yodeling Sweetheart, at the Branson theatre now known as Jerry Presley’s God and Country Theatre. Williamson is also the author of several western novels.

To order a copy of Williamson’s novels visit ermal.com or email duke@ermal.com.