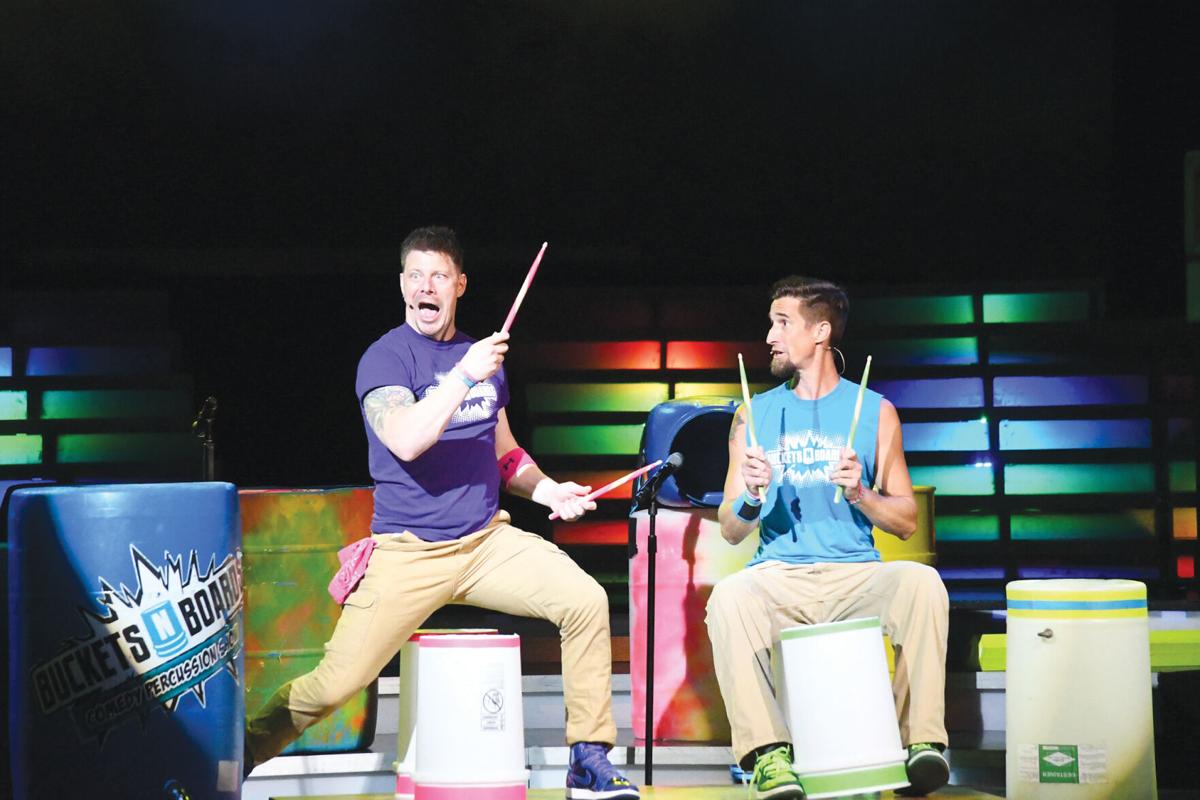 “Buckets N Boards” features the musical and comical talents of Matt Levingston and Garth Sever and is a full stage percussion show. 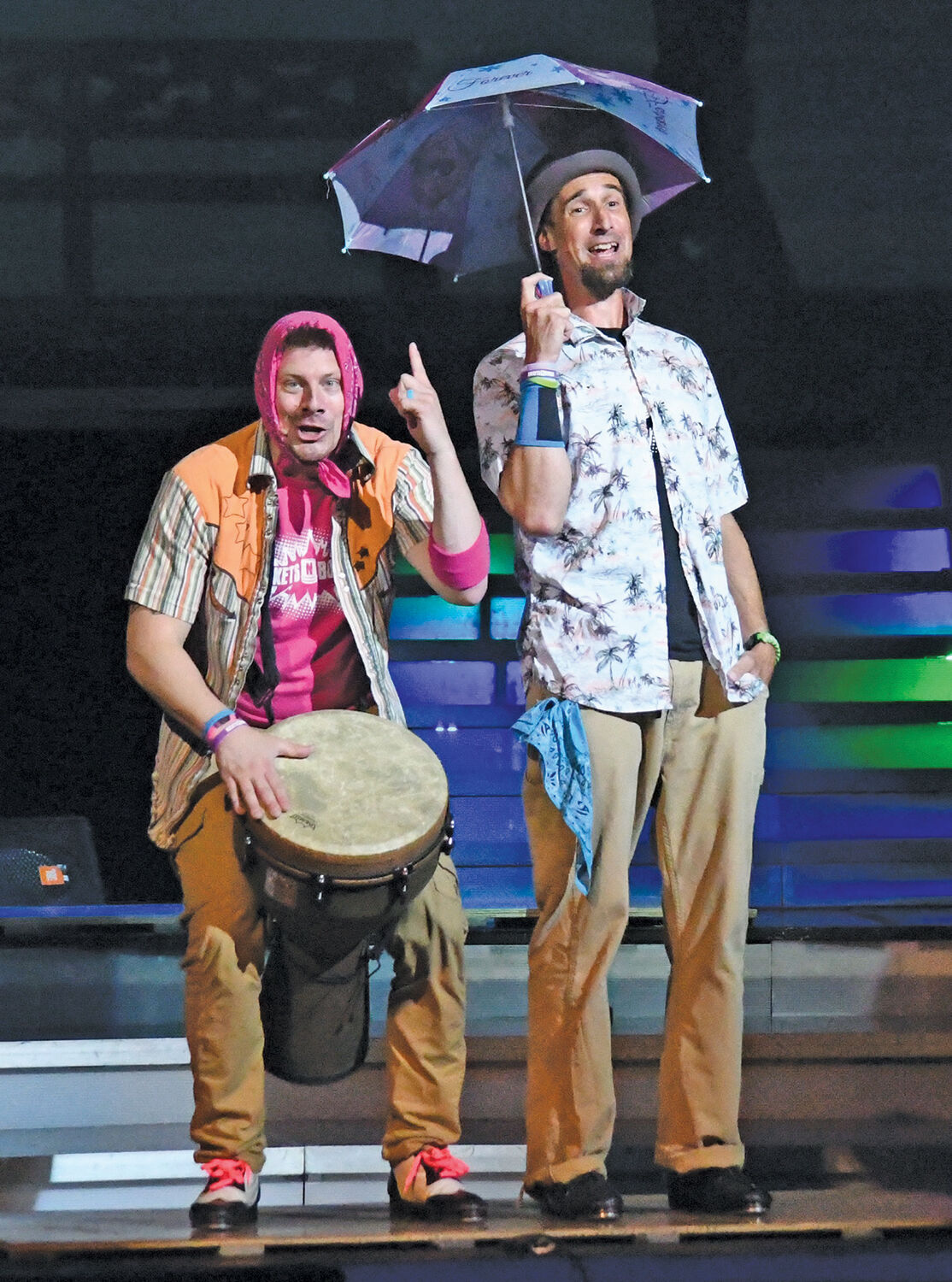 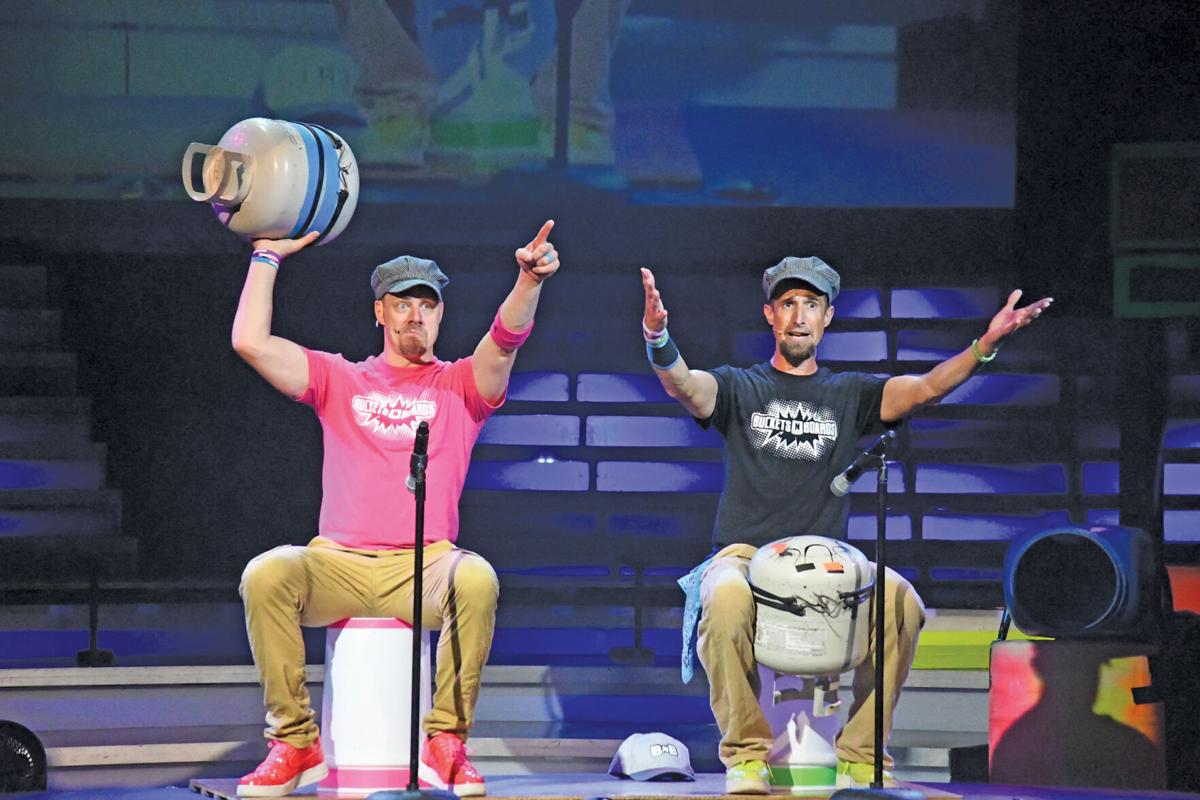 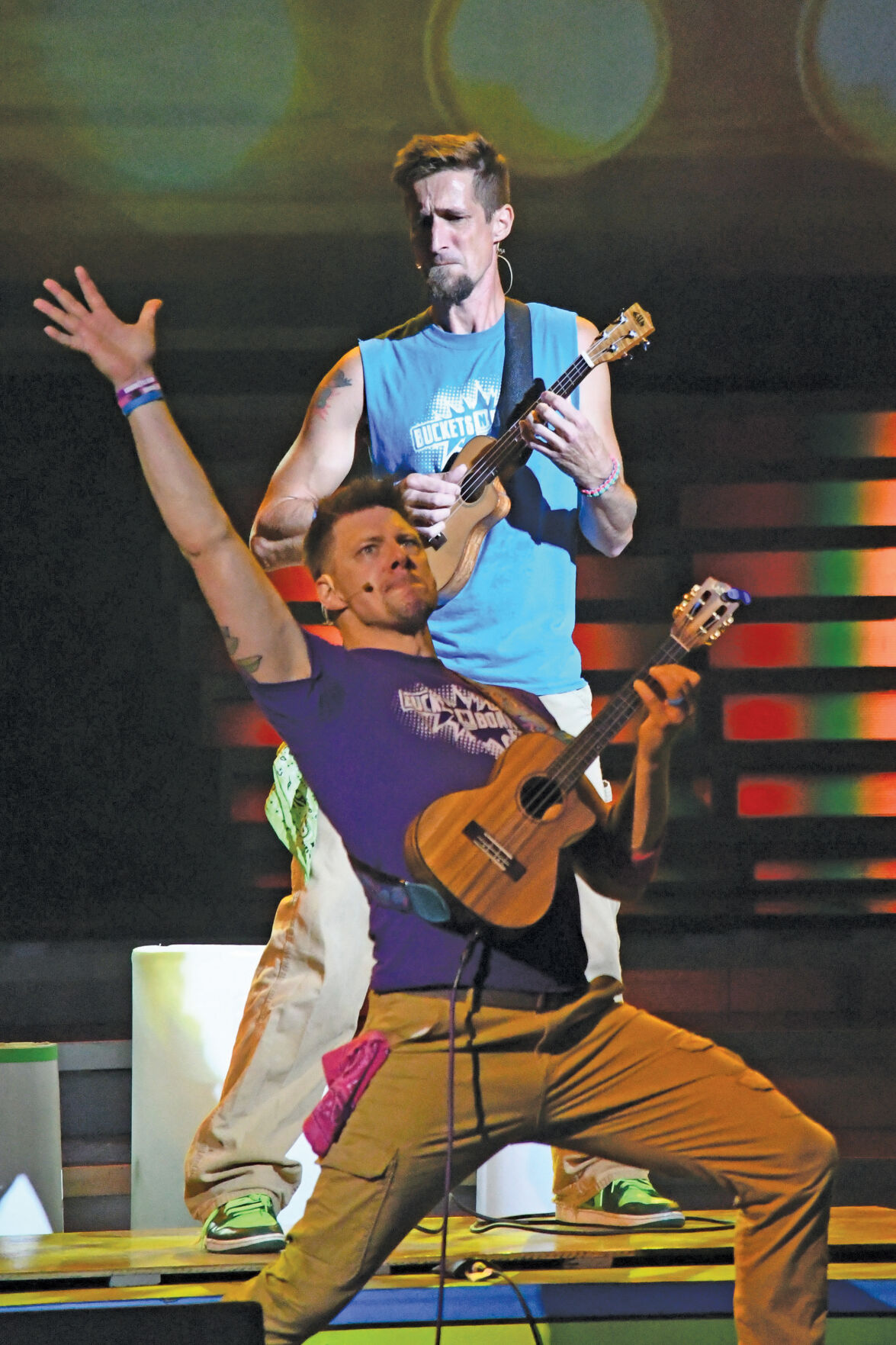 “Buckets N Boards” features the musical and comical talents of Matt Levingston and Garth Sever and is a full stage percussion show.

If you notice a family yelling boo-yah and drumming on anything from the cars to the trashcans as they’re leaving Dick Clark’s American Bandstand Theatre in Branson, don’t be alarmed. Chances are they’ve just enjoyed a performance at Buckets N Boards.

Featuring the musical and comical talents of Matt Levingston and Garth Sever, Buckets N Boards is a full stage percussion production brought to life on stage inside the American Bandstand Theatre. Currently performing their 11th season in Branson, Levingston and Sever bring a variety of instruments, objects and improvisation to the stage to treat audiences with music, comedy and a whole lot of rhythm.

The origins of Buckets N Boards began when Levingston and Sever began working together at Branson’s Dolly Patron’s Stampede in the early 2000’s. For a decade, Sever was known to Stampede audiences as the lovable farm-hand Skeeter. While Sever started at the show in 2000, it wasn’t until around 2005 that Levingston would arrive to perform a variety of roles, including stunt horse rider, the alternate Skeeter and the Master of Ceremonies.

From there the duo began street performing and by the opening of the Branson Landing in 2007, Buckets N Board became the promenades featured street act.

“In their commercials it was called ‘Branson with a Whole New Beat’ and that’s because we were down there,” said Levingston. “With street performing, you know very quickly if people like it or they don’t. If they stay and they give you money or if they just keep walking. We realized very early on that comedy was our goto.”

As the rhythmic duo continued to perform together, Sever shared a full show began to form.

“We formed a lot of our material playing on the street. It just helped us figure out what kind of worked and then we’d improvise for hours and hours on end playing,” said Sever. “We’d learn to listen to each other and built a lot of original show out of that. I think the first time we did it, we had like an hour stage show in 2009 and opened the full show in 2010.”

Since they began performing on stage, Buckets N Boards has been a part of three Branson theatre families. After a few seasons at both the Clay Cooper Theater and former Starlite Theatre, the pair found their current home at Dick Clark’s.

While the show is called Buckets N Boards, the guys both agree and want audiences to know that their show features much more than what’s just inside the title.

“Originally we started and were street performing that’s all we had was we had buckets and we had boards. Like tap and drumming,” Levingston said. “It’s a comedy show that’s all things rhythm and music. Our main goal is we what to have a very involved crowd. That’s one thing that we’ve always kind of prided ourselves on. If you come to our show you’re not just going to sit there and after the song you’ll clap. We want it to be where kids feel comfortable just yelling things and we make interactive.”

In 2012 the duo then began a relationship with Disney Cruise Lines and started performing on board cruises during the Branson off season.

“We did a trial run with Disney,” said Levingston. “They scheduled us five weeks and then they go, ‘This first week, we got to see how it goes.’

“Then after that first week they wrote us a message and said, ‘Hey your reviews are super high, so work as much as you want.’”

Sever added, “We would do anywhere from 12 to 15 weeks a year. It was a lot to travel, but we would get to bring our families sometimes onboard and it’s been a really good gig.”

Now after several seasons onboard, Buckets N Boards has become one of the most requested headline act on Disney Cruise Lines.

Over the years, Bucket N Boards has also become a favorite at fairs, festivals, colleges and performing arts centers.

“One of our favorite ones was we were the headlining act for the Kansas City Symphony. So we did like the nose number with the full orchestra behind us,” said Levingston. “But it’s interesting to be like part of you wondering like these are real deal musicians.

“Are they have fun and laughing at us or are they going, ‘These guys have things in their nose and we have to play full stuff with them.’ But it’s super awesome.”

While Buckets N Boards didn’t get to begin their 2020 season until June because of the pandemic, their Branson season is already about to come to a close with their final show on Thursday, Aug. 13.

Sever said when the pandemic first reached the shores of the United States and began picking up steam, they we’re on a cruise ship performing.

“We did a cruise the first week of March and then came back,” said Sever. “We we’re on the cruise going, ‘I hope we get to come back.’”

While the guys were able to make it back home in March, Levingston shared that some performers weren’t as fortunate.

“We had some friends that only two or three weeks ago were they finally able to go home. Like South Africa, just because of where they were, they were stuck on the ship for the past three solid months,” Levingston said. “We were really lucky that we made it like right before it all kicked in and stuff.”

Sever also shared that initially they were unsure if they would get to perform in Branson at all this year and are thankful to the theatre for making it happen.

“We’re really appreciative of what the theatre has done and the lengths they’ve gone,” said Sever. “The fact of closing every other row that’s hard for them to do and it’s hard for us to do, but everybody and to agree that that’s the way to go about it now. I’m glad they do that.”

Starting at the end of September, the guys were scheduled to begin their tour aboard Disney Cruise Line’s, however at this time the duo’s performance schedule is in limbo as they await to hear if or when the cruise line will re-sail this year.

In the meantime, the pair said they’re going to take the time to get more creative with some things including video performances on Patreon and music lessons on YouTube.

To learn more about the show and their upcoming online offerings visit bucketsnboards.com.