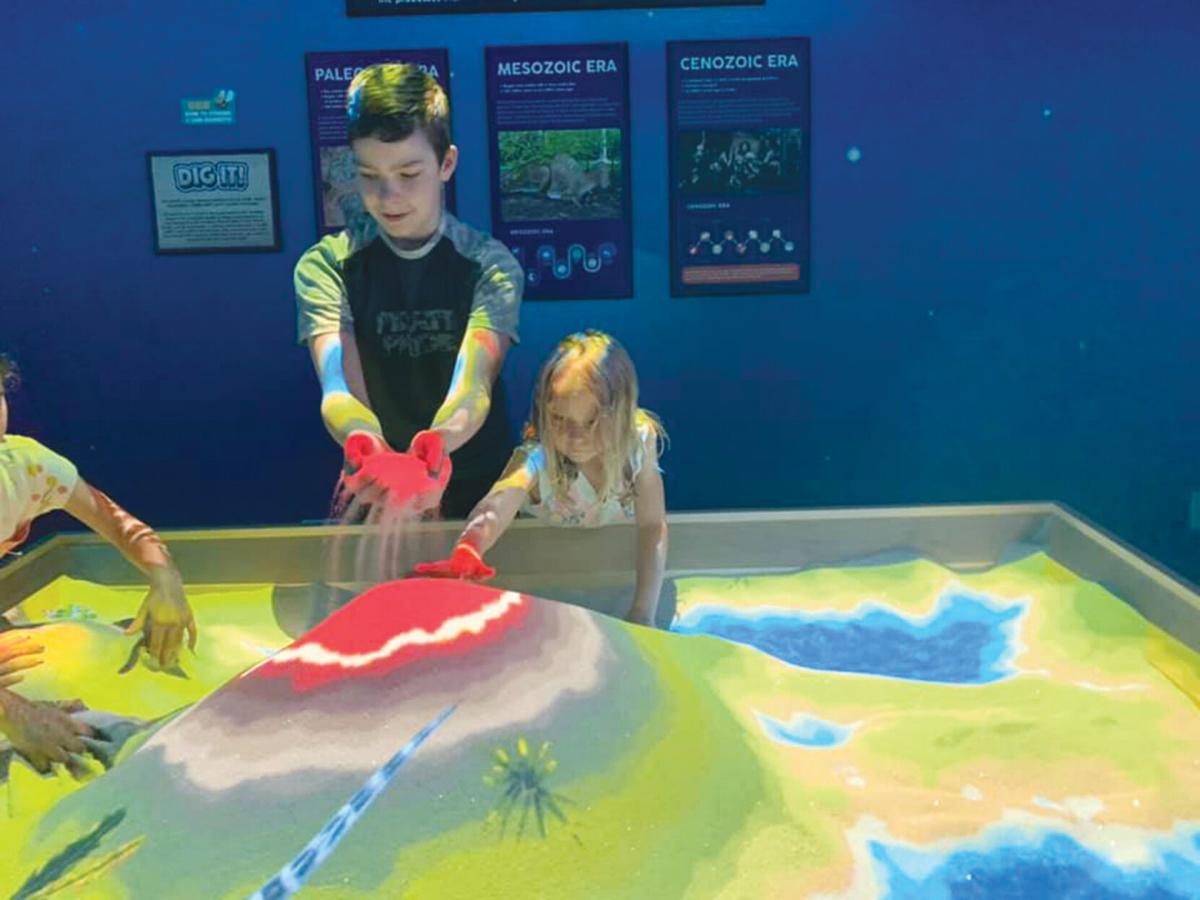 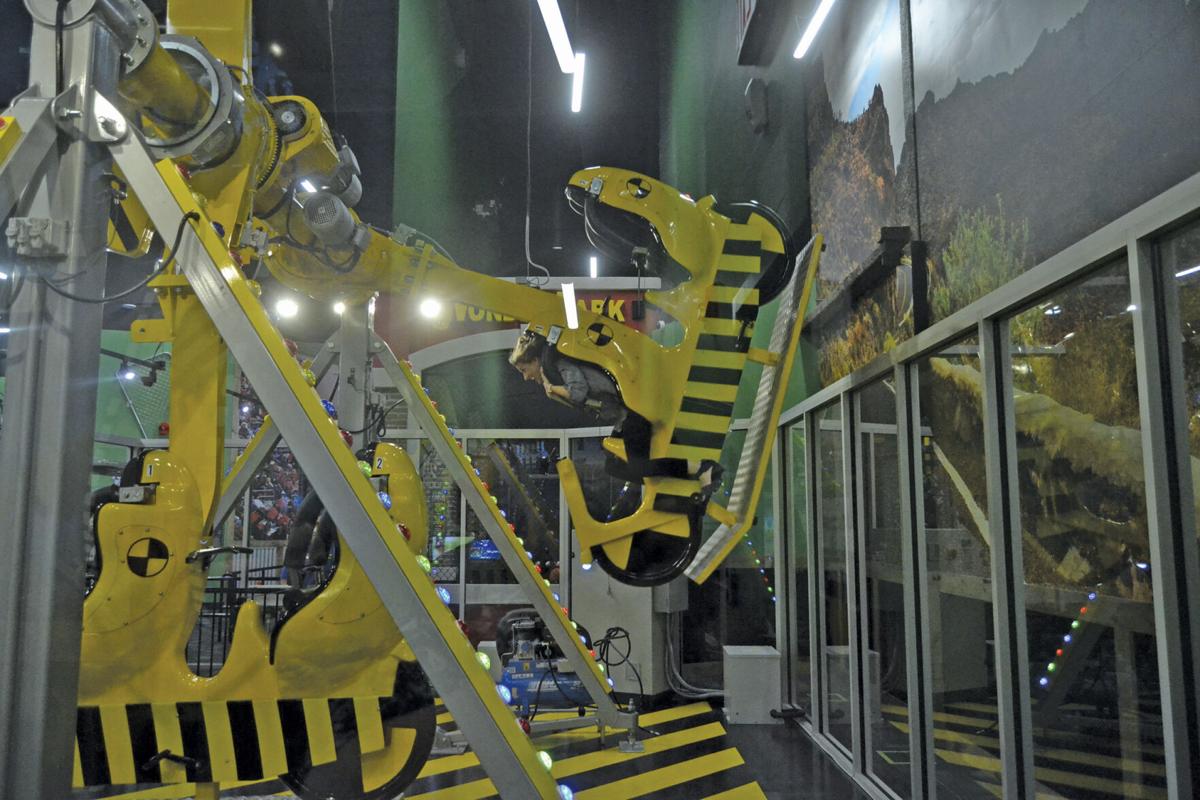 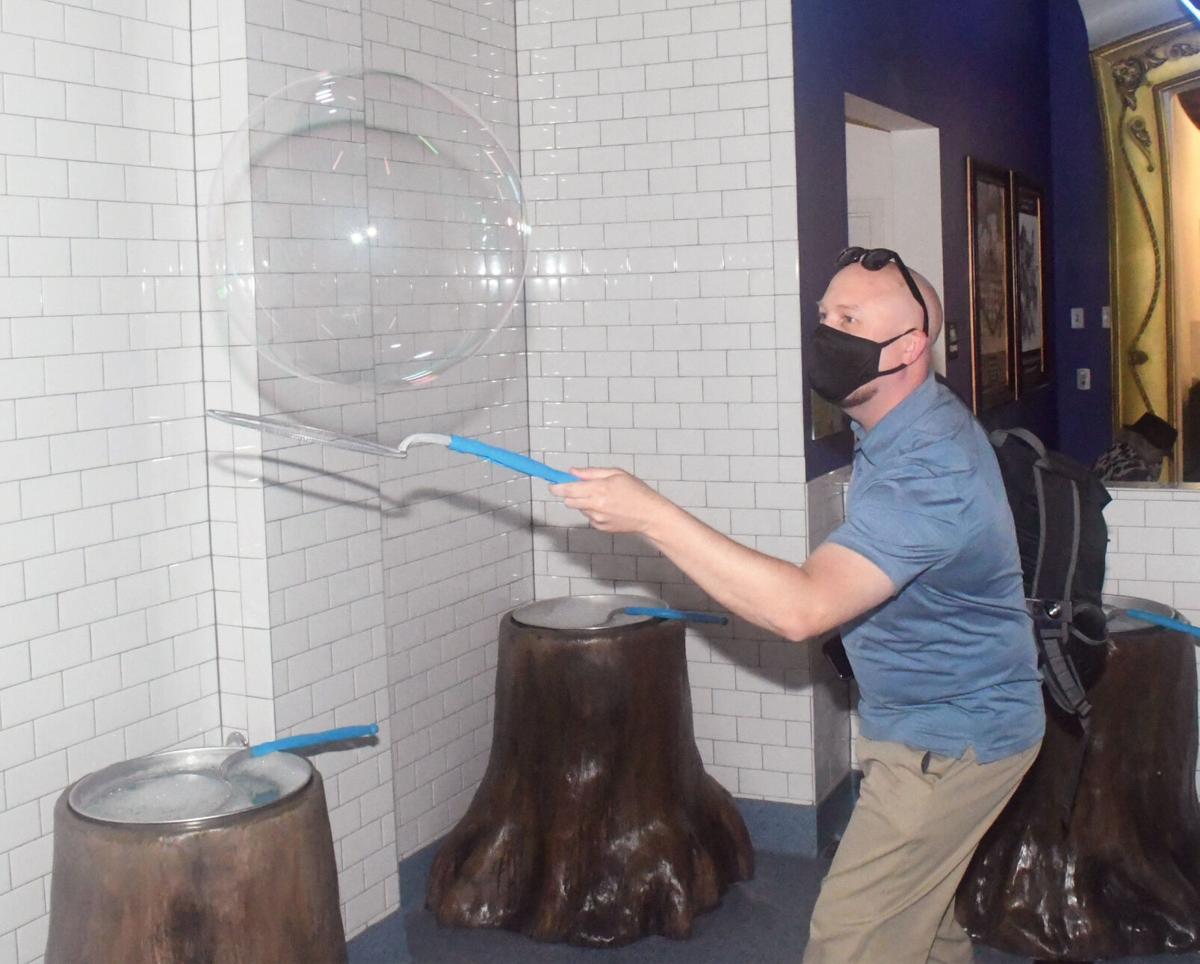 Josh Grisham tends to his massive bubble in the WonderWorks Bubble Room earlier this week.

Josh Grisham tends to his massive bubble in the WonderWorks Bubble Room earlier this week.

The astonishing awesomeness of WonderWorks

After more than two years of waiting, Branson’s newest attraction, WonderWorks, “a science focused indoor amusement park,” finally opened Friday morning. Tuesday afternoon, the media got a special preview, and it is safe to say, we were “turned upside down” by what we saw and experienced.

At 48,000 square feet, this is the largest of the company’s six locations. Other WonderWorks facilities are located in Orlando, Myrtle Beach, Pigeon Forge, Panama City Beach and Syracuse. Not only is WonderWorks a perfect blend of education, entertainment and fun, it is wholly unique for this area.

The building is designed to look like “a grandiose house flipped upside-down,” a theme which carries over into the lobby. Upon exiting the lobby, guests then walk through the Inversion Tunnel, which is there to “realign and invert your orientation so that you can defy gravity and play with all the exhibits and experiments.”

That eye for detail immediately sold me on the experience. Also, that particular “tunnel” is hands down the best one of its kind I’ve ever walked through. (In fact, I went through it four times and giggled like a fool each time).

Once you’re inside, prepare to be thrilled by the several areas highlighting things including meteorology and weather, space discovery (my personal favorite of all the sections), an art gallery, a tribute to veterans, the Wonder Coaster, a S.T.E.M. area, a Bubble lab, as well as a tribute to Branson, and much more.

While the space discovery section was most assuredly my favorite of the themed areas, the interactive sandbox is tied with the Inversion Tunnel for my favorite individual activity.

Seriously Loyal Reader(s), I haven’t played in a sandbox for that long, or that intently, for more than a decade. I wish I had one in my living room.

Anyway, with so much more to talk about inside WonderWorks, I figured it would be a great time to welcome my Branson Tri-Lakes News teammate Tim Church to share some of his thoughts.

“WonderWorks was filled with so many surprises and I had a tremendous time. This attraction definitely matches the rest of Branson. I believe that it’s a perfect fit and a great addition to our already family-friendly destination.

“I believe that people, both young and old, will equally find activities inside that will not only leave them entertained, but also thrilled, amused and excited for what’s waiting for them on the next floor. At WonderWorks, around every corner is a new adventure. The storyline behind the attraction is just the start of the fun awaiting guests inside.

“While we spent nearly two hours venturing throughout the attraction, I feel there was still so much more to explore. Some of my favorite features included the 5D Ride, the infrared camera station, the laser tag arena and the hurricane simulator.

“However, I’m certain that on my next visit I’ll find even more favorites. I definitely encourage people to make plans to attend WonderWorks Branson.

I can’t wait to return myself.”

Guests are also encouraged to review all safety rules prior to their visit on the website.

A week full of opens, returns and debuts

The second week of June is seeing a massive bump in the amount of shows and attractions opening for the season.

According to a release, this is a “high-energy show with classic songs” featuring Brennan, who performed on Broadway in “Grease,” was featured on the TV show “MASH,” and was named Ms. Missouri Senior America 2016.

Showtimes are 5 p.m. Thursday through Sunday.

Saturday at 7:30 p.m., “The Haygoods” return to the Clay Cooper Theatre to continue celebrating their 28th season in Ozark Mountain Country.

Michael, Matthew, Dominic, Tim, Patrick and Catherine Haygood, along with drummer Dino Phillips, take the Branson show experience to the next level each and every season, and I can’t wait to see what they do in 2020.

Also set for Saturday night is the post-COVID return of Jerry Presley and the “Aloha From Hawaii” edition of his “Elvis Live” show at the God & Country Theatres.

Presley features a live band and back-up singers as he continues on his personal mission to recreate the feeling of seeing Elvis Presley, his cousin, live in concert. Visit godandcountrytheaters.com for more.

Sunday night will see first of the new slate of shows at the newly remodeled and renovated Branson Star Theatre,  debut with “Thunderstruck,” an AC/DC tribute show at 8 p.m.

“Nashville Roadhouse” will also feature national touring acts, starting with the Swon Brothers, who appeared on “The Voice.”

The venue is also set to feature a full bar with live entertainment.

According to a recent social media post, the band Blackfoot will perform at the Branson Star June 2 and 3.

Also set for June 10 is the return of “Grand Jubilee” at the Grand Country Music Hall, again starring Mike “The Golden Throat of the Ozarks” Patrick, as well as the man, the myth, the legend Jamie “Jim Dandy” Haage, who shares the stage as his co-host/comic relief/star of the show.

In addition to two awesome shows, Wednesday will also see the reopening of the Butterfly Palace & Rainforest Adventure.

According to a release, they “will be following CDC Guidelines and State of MO protocols:

–Guests must maintain 6’ of distance at all times

–Guests must maintain proper hand hygiene throughout the facility”

Also, they will not be holding the scheduled butterfly releases or critter encounters, but nectar flowers will still be available for guests and will be sanitized after each use.

Another important thing to remember is no advanced tickets on their website or through other vendors until capacity restrictions are no longer in place.

Tickets are available at the door.

June 13 will see Silver Dollar City open to season pass holders, June 15 for everyone else. In addition to required reservations and touchless temperature checks, masks will also be required for anyone over the age of 3.

The Americana Theatre’s “CJ Newsom’s Classic Country and Comedy” returns June 14, while June 15 sees the debut of the Ruby Room Theatre & Lounge at the Majestic, which will house “Dancing in the Streets – a Motown Revue” and “Doo Wop & the Drifters.”

Earlier this week, we finally got word on Sight & Sound’s “Noah,” their “first Biblical epic production,” will return June 16.

During this show, guests are taken on a journey as Noah and his family face hardships, ridicule and betrayal as they do God’s will of building a huge floating vessel and filling it with two of every kind of animal. Noah and his family are commanded to do this so, when judgment came, the family and all the animals would be saved.

Many shows are also returning later this month, including Showboat Branson Belle on June 20, “Ozarks Gospel” at Grand Country June 21, “Legends in Concert” June 25 at Dick Clark’s American Bandstand Theater, then “Ozarks Country” June 28 at Grand Country.July 1 will see “Parrotville” return to the Jim Stafford Theatre, as well as “The Sons of Britches” at the Little Opry Theatre. Branson’s Imax Entertainment Complex is also set to reopen July 1.

There are several shows and business that haven’t announced a return date, but as soon as they do, you can read all about right here, or in Branson This Week, or at bransontrilakesnews.com.

Gumm debuted this show late last year at the venue, and it was an immediate hit. This year, he and his costars will again perform an “over-the-top, all-ages, family-friendly, variety show”” featuring two hours of comedy, impersonations, and “power-house vocals.”

Tickets available by calling the Clay Cooper Theatre box office at 417-332-2529, or by visiting claycoopertheatre.com.

In the last edition of the Branson Beat, I wrote about the passing of local “Rattlesnake” Eddie Wood. Thursday morning I got a call from benefit organizer Mike McAdoo letting me know the benefit show set for June 14 at the God & Country Theatres is now on hold.

According to a facebook post, “we want to honor Debbie Wood’s wishes and have a celebration of life and a benefit at Shepherd of the Hills at a date to be determined. Everyone who has already given money or donated, their gifts will all be given to Debbie. It’s very much appreciated.”

As soon as I know more, I’ll be sure to spread the word here.

Until then, my thoughts, prayers and positive vibes continue to go out to Wood’s widow Debbie, as well as her entire network of friends and family.