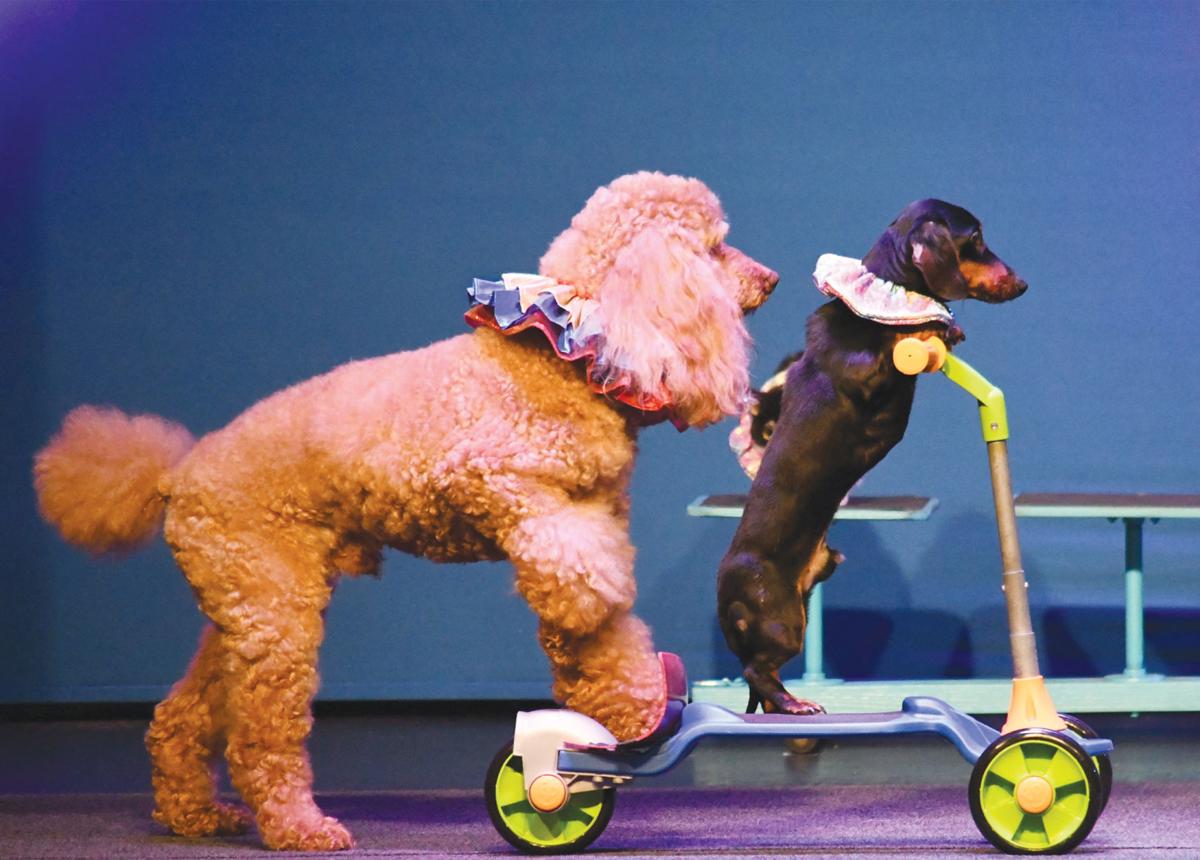 Brownie, left, helps his co-star Gary scoot across the stage during the “Amazing Pets” show at the Grand Country Music Hall. 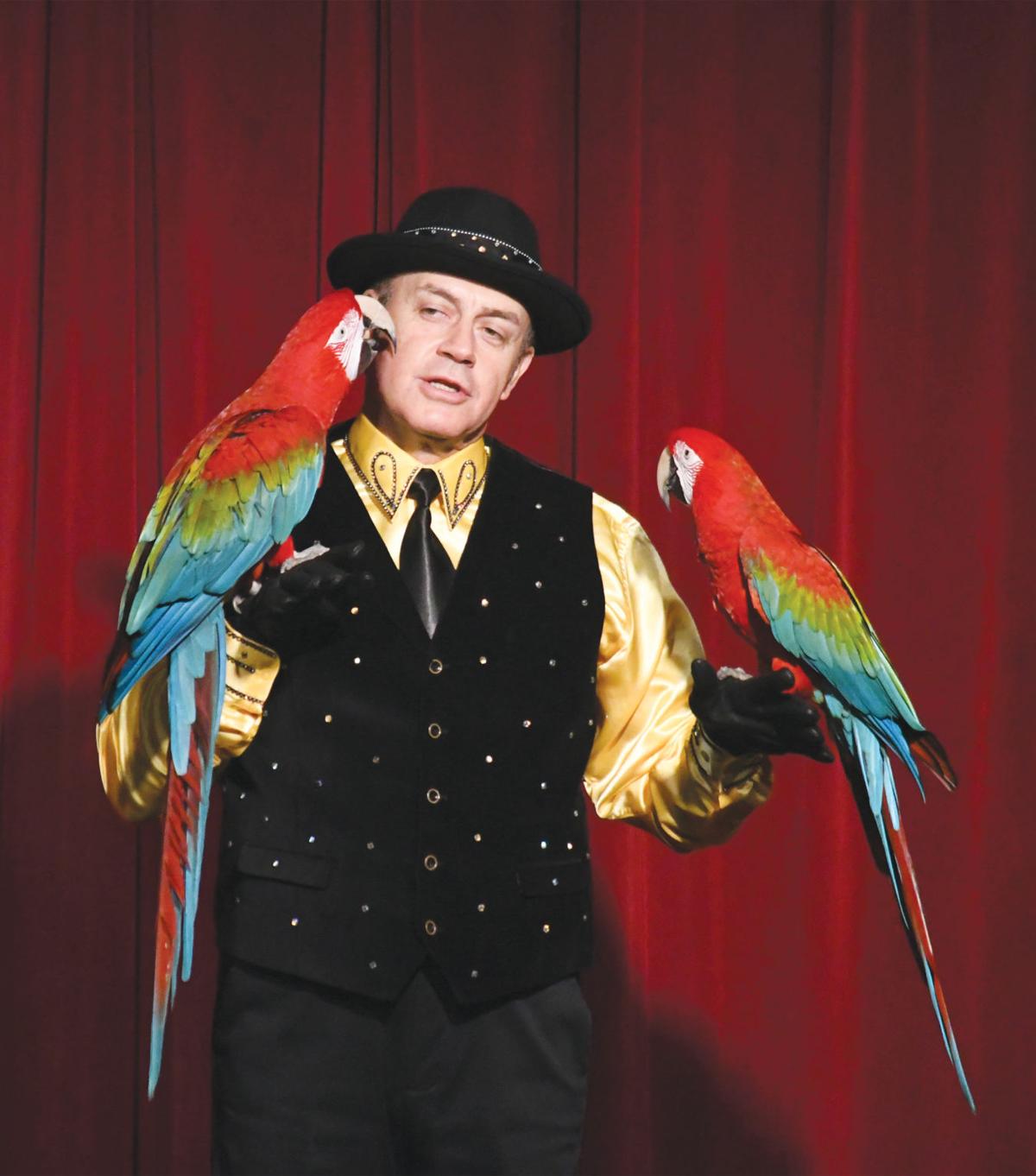 Valery Tsoraev and his feathered friends, Duke and Daisy, have fun at “Amazing Pets.” 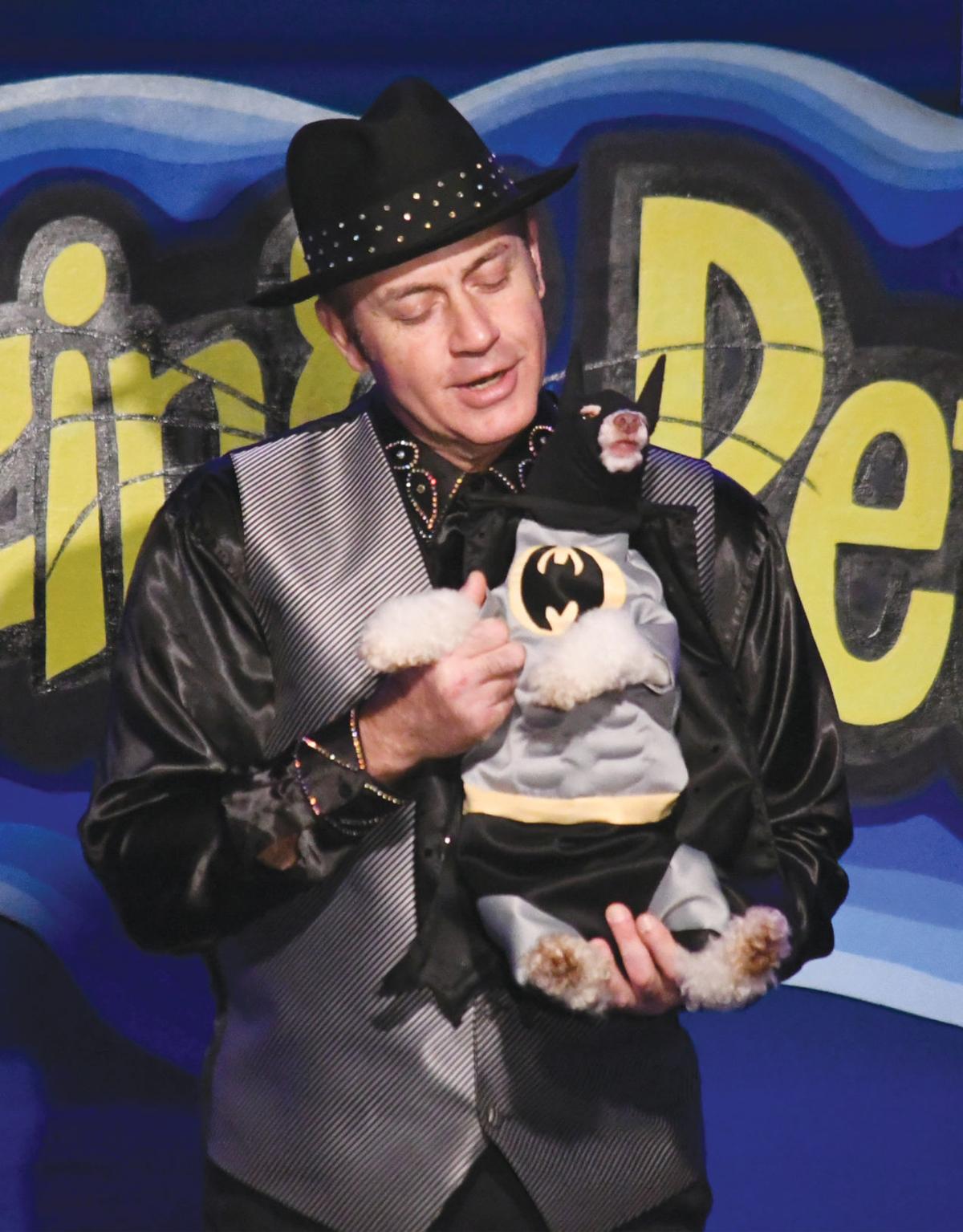 Valery Tsoraev and his buddy “Batdog,” also known as Ozark, perform at 10 a.m. at the Grand Country Music Hall. 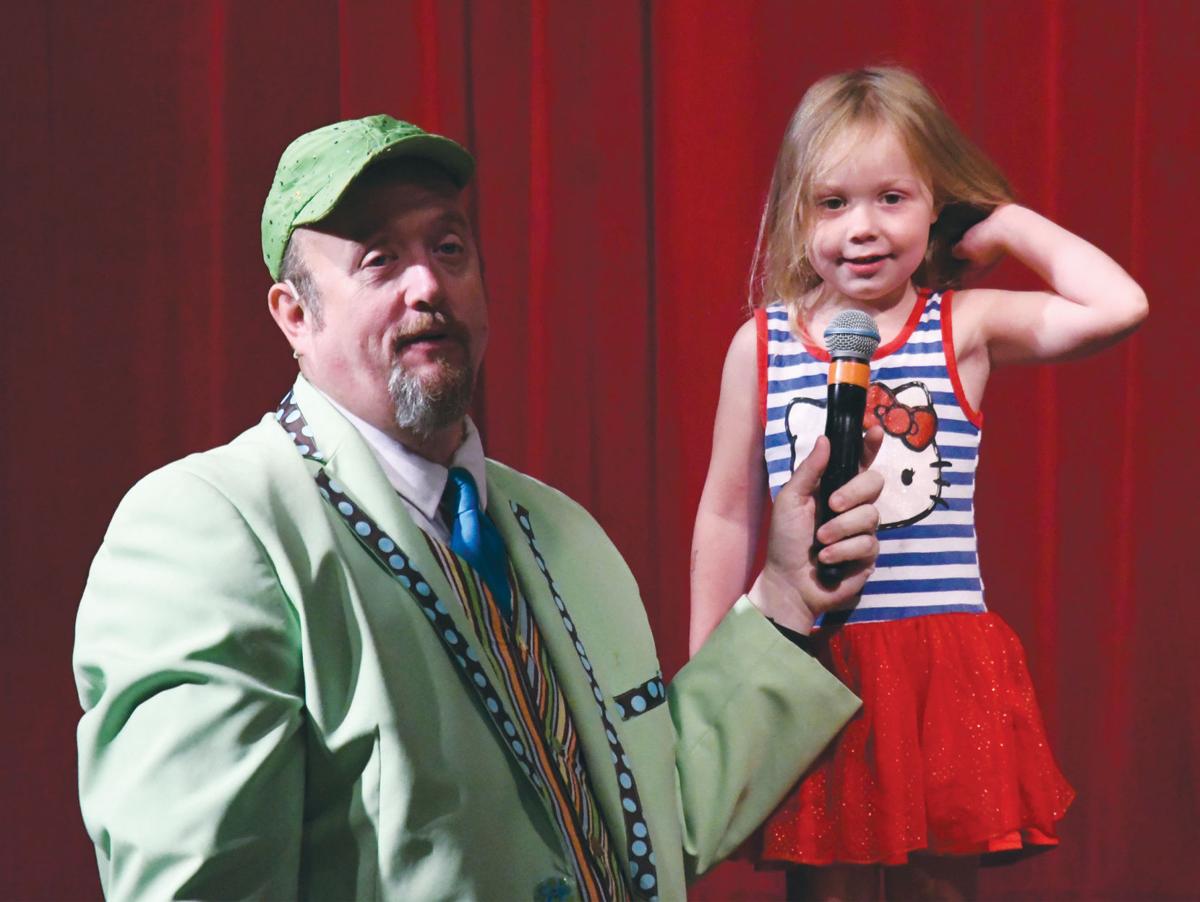 Shannon “Apple Jack” Thomason wishes a happy 4th birthday to Sophie Adami, who attended the show with her grandparents and great-grandparents. 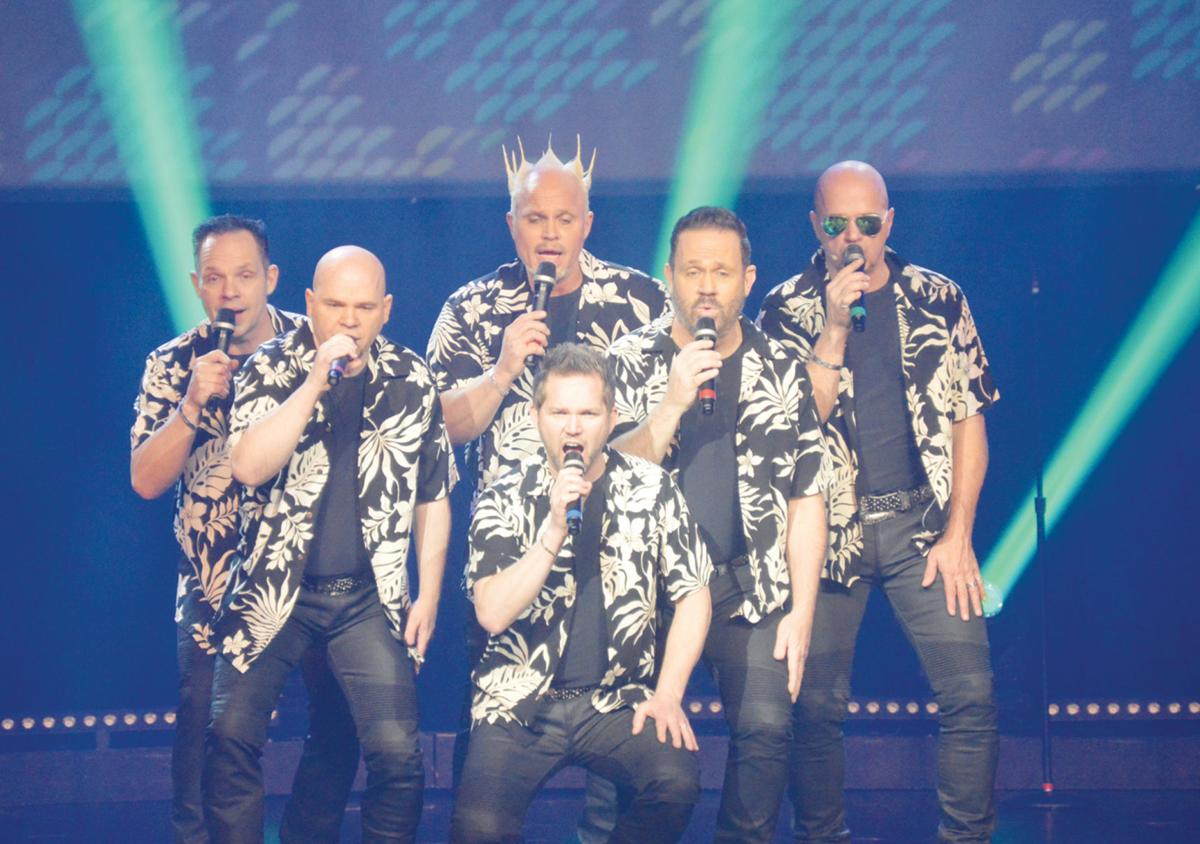 Brownie, left, helps his co-star Gary scoot across the stage during the “Amazing Pets” show at the Grand Country Music Hall.

Valery Tsoraev and his feathered friends, Duke and Daisy, have fun at “Amazing Pets.”

Valery Tsoraev and his buddy “Batdog,” also known as Ozark, perform at 10 a.m. at the Grand Country Music Hall.

Shannon “Apple Jack” Thomason wishes a happy 4th birthday to Sophie Adami, who attended the show with her grandparents and great-grandparents.

Earlier this week I decided to get some good old fashion family fun in my life, so I made my way to the “Amazing Pets” at the Grand Country Music Hall.

Even though Shannon “Apple Jack” Thomason and Russian-born dog and cat trainer Valery Tsoraev have top billing, the stars of the show are most assuredly the dogs, cats and birds.

Each animal on stage is trained by Tsoraev, who has performed with the Cole Bros. Circus all over the world,  was also featured, along with one of his cats, in the 2003 Tim Burton film “Big Fish.” These animals do some pretty awesome things.

Plus, those puppies are so doggone cute.

In addition to all the animals, the children in the crowd also play a large part during many audience participation sections. No one is forced to come on stage, and with the current state of the COVID-19, not everyone will choose to do so.

However, I’d estimate about 90 percent of the children in the crowd joined Thomason on stage whenever he asked for help. They were all so happy to be a part of the show, and that joy was evident on every face.

“Amazing Pets” is truly a family experience, and I promise a great time for all.

‘Six’ back at Bandstand Monday

One of Branson’s most talked-about shows, “Six,” is set to return to the stage at Dick Clark’s American Bandstand Theater Monday at 8 p.m.

Often referred to as an “orchestra of human voices,” the brothers of “Six,” Kevin, Lynn, Barry, Jak, Owen and Curtis Knudsen, have been belting out a cappela tunes for more than 40 years, with the five oldest brothers making their TV debut on the “Donnie and Marie Show” in 1978.

“We had that TV success early on and thought, ‘Oh man, we’ve made it,’ but it was like ‘whoop-dee-doo,’ because nothing happened,” Jak Knudsen once told me. “We realized we had to work harder, and it took us a few years to figure that out.”

Knudsen said once they were older, their father and mentor set them free to go in whatever direction they saw fit. That’s when they got into their “old beat up pickup” and moved to California, where they started singing on the streets.

“We thought that was the best decision of our lives but by all standards we should have been in college and if my children came up to me and said they were going to California to sing on the streets I’d say, ‘No,’” he said with a laugh. “We were so into what we were doing that we didn’t care we had to sleep in the back of the truck ... we were so happy to be working 16 or 17 hours a day then going to sing. It didn’t matter where we slept because it was fun.”

After performing all over southern California, the brothers started gaining exposure and soon found themselves performing at Hollywood A-list parties for celebrities such as Arnold Schwarzenegger, Clint Eastwood, Joel Silver and Warren Beatty.

As time passed, they began to craft their performances, in which they were able to provide the sound of a full band using only their voices, from a novelty act to a full entertainment experience.

“We are actually doing all this stuff with just our voices,” Knudsen said. “Hopefully the audience will have those ‘Wow, they’re doing all this with their mouths’ moments, and it peaks their interest, but we don’t want that to be the focus. We entertain the crowd as if there is a full band and hopefully, it’s as entertaining as if there was a full band behind us.”

I’ve seen this show many times throughout my decade here at the Branson Tri-Lakes News, and they have never failed to knock me out with the sheer awesomeness of what they accomplish using only their voices.

The thing I’m most excited to see is what new tunes they’ve added for their inaugural season at Dick Clark’s American Bandstand Theater.

Last month I got a call from local entertainer Aaron Napier hipping me to the fact the Black Oak Mountain Amphitheater, located just south of Branson in Lampe, will reopen July 18 with a special concert event featuring a handful of local and regional favorites.

The new owner, John M. Stauffer II, is a Branson native and has owned several other businesses in this area, including insurance agencies, a construction company and other real estate developments.

“Being from here, I hope everyone is as excited about this venue coming back as I am,” Stauffer told me earlier this year. “It’s our thought and hope this will be a great venue to have back in the Ozarks. I have very strong roots in this area, and a passion as an entrepreneur to have successful businesses in this area, as well as being involved in this community, and I’m really hoping this business will be another way to give back to the community.”

The amphitheater originally opened in 1983 as Swiss Villa Amphitheater, right around the same time many entertainers opened theaters in Branson.

The venue was later renamed Black Oak Mountain Amphitheater. While the theaters in Branson featured some of the top names in country music, the amphitheater started out as a venue for rock bands. Def Leppard, Lynyrd Skynyrd, REO Speedwagon, Steppenwolf and Ozzy Osbourne all performed at the amphitheater.

According to Stauffer, this event will serve as a “soft open” before the full lineup gets rolling.

“As most are aware BOMA has sat vacant and was completely destroyed over the last 5 years by vandals and we have had to completely gut and remove all infrastructure and replace,”  he said. “We are only expecting a very small crowd in attendance on July 18  and this will help us make sure all the hard work that has been done to revive the Amphitheater is adequate and correct for the larger scale shows we have scheduled.”

He also said they decided to make the event as modestly priced as possible, “to allow the locals to come out and visit the amp and see the venue coming back to life.”

“We feel we’ve made it at a price where you can come all day and listen to the different local artist or just for a few hours if you choose,” he said.

So far, the lineup is set to feature Joey Herd, the Credence Cool Water Revue band, as well as Lytyl Skynyrd, a band which pays tribute to the late, great Ronnie Van Zant and the boys in Lynyrd Skynyrd. More artists are set to be announced over the next few weeks.

The gates will open at 3 p.m., and the “family-friendly” environment will also include yard games, fun activities, food, beverages and more.

Tickets are on sale.

Back in April, Stauffer announced via their website the venue would not open May 30, which was to see Justin Moore and Tyler Farr, hitmakers with ties to this area. Moore’s new date is Oct. 10.

According to the venue’s social media pages, because the COVID-19 situation is changing by the day, they “currently are not allowed to post the upcoming shows scheduled for September and October at this time per artists management companies.”

I’m excited to see this awesome venue return to the forefront, and I believe next week’s concert event is the perfect way to kick things off, especially with the way the world is right now.

One of the most interesting aspects of the current pandemic is the reopening of movie theaters all over the world. With no new Hollywood hits set for release until next month, theaters are relying on “throwback” hits to fill their screens.

Last week I was stoked as I got to catch both “Batman Begins” and “The Dark Knight” on the giant Imax screen. This week, the criminally underrated and fantastically fun “Aquaman” is headlining Branson’s Imax.

While a lot of us have seen it before, I can honestly say, if you haven’t seen it on the next-generation digital Imax with Laser, on a 62-foot-tall screen while sitting in the most comfortable chairs in town, then you really haven’t seen it at all.

The Elite Cinema III will continue to screen “August Rush,” as well as a personal favorite, “The Goonies.” As far as what’s “new,” both “Space Jam” and “Ready Player One” will see select showtimes throughout the week.

Plus, all the shops, restaurants and shows in the Little Opry Theatre are all now open. It’s always a great time at Branson’s Imax Entertainment Complex.