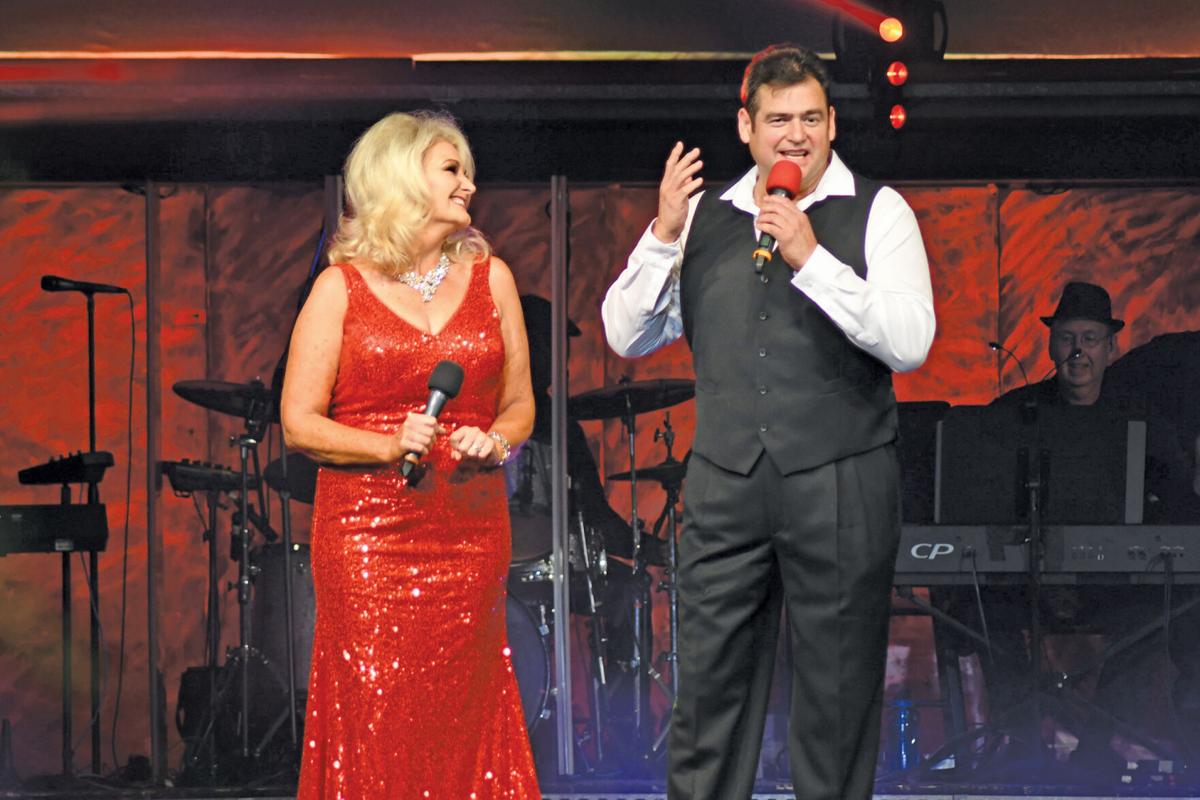 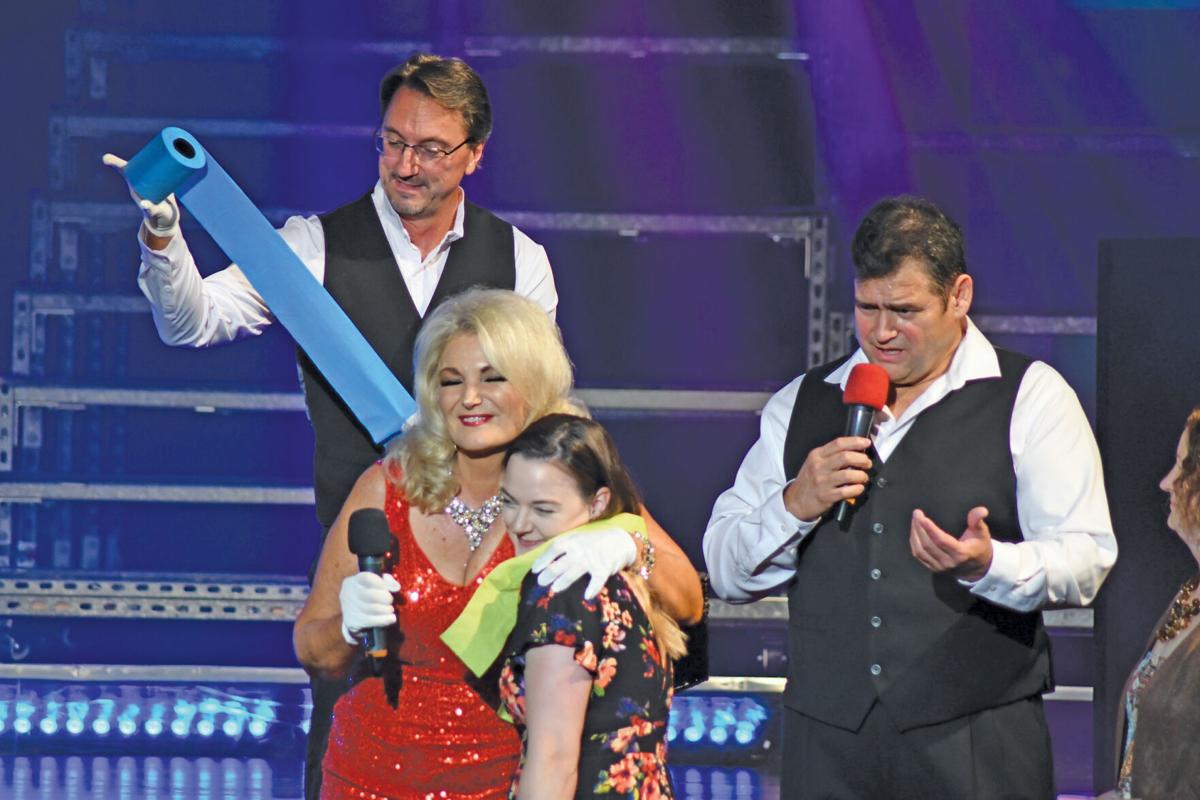 As Doug Stiel perfoms Love Me Tender as Elvis, attendees were invited up to the stage to receive a one-of-a-kind “scarf” from Cindy Bea and Mark Sander. 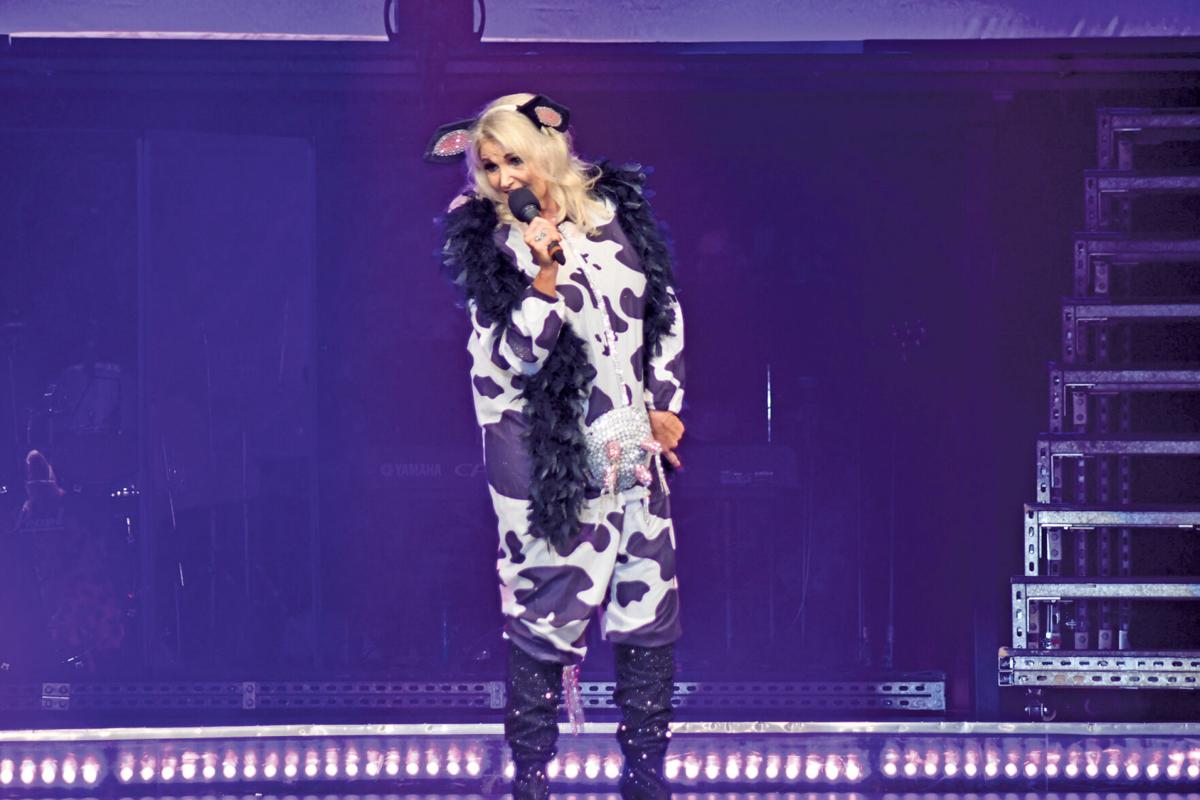 As Doug Stiel perfoms Love Me Tender as Elvis, attendees were invited up to the stage to receive a one-of-a-kind “scarf” from Cindy Bea and Mark Sander.

For more than 20 years, Famous Impressions have performed in Las Vegas and all across the county. Now they’re looking at the possibility of calling Branson home.

Featuring the talents of Doug Stiel, Cindy Bea and Mark Sander, Famous Impressions held a one-night-only showcase performance at the Hughes Brothers Theatre on Wednesday, Aug. 19. Their mission? To determine if Branson is a right fit to become their new headquarters.

For their showcase, hundreds of attendees found their way into theatre and made themselves comfortable in their socially distanced seats, many of whom may have been unaware of what they were about to see. However, when the voice of Arnold Schwarzenegger began speaking to the crowd from behind the curtain, I’m certain it was then they were in for a memorable performance.

During their two decades of performances, Stiel and Bea performed in nearly every casino and convention center Las Vegas had to offer. They also found themselves performing for private parties, traveling tours and even at political events. However, after a visit to Branson a few years back, Stiel said they fell in love with the area.

“We’re Christian based, we like to talk about it, but in Vegas, it’s changed so much,” said Stiel. “So we can talk freely here. We like the freedom we have here. We’ve fallen in love with the people. The people are nice here. I mean really nice.”

For the show, Stiel provided the impressions which ranged from famous singers and actors to politicians and talk show hosts. Some of my favorites from the show included Stiel’s voice tributes to Elvis, John Wayne, Sean Connery, Ed Sullivan, Johnny Cash, Bill Clinton and Jack Nicholson.

While Stiel brought the impressions to the stage, Bea brought out the showstoppers with songs matching the talents and performances of icons such as Crystal Gale and Karen Carpenter.

Joining the duo in Branson to make a trio is Sander, who serves as both the general manager of Famous Impressions and as the emcee of the show. During the showcase performance, Sander used his talents as a former radio talent to not only keep the show flowing forward, but also provide some backup singing.

Stiel explained he’s able to use his background as a former psychotherapist to really get in touch with the audience they’re performing for.

“It’s tough for us with the COVID, because we believe in touch therapy, and we touch our audience. We go out and bring them on stage. We sing to them. If they cry, they cry.

“We love it. Because sometimes music takes you back and takes you places you haven’t been for a while. And sometimes you miss people when you go there,” said Stiel. “So I think it’s very cathartic, very therapeutic. We do a lot of talking. It’s kind of like Dr. Phil meets Comedy Central or something. People leave and they’ll tell us, ‘My husband hasn’t laughed in 25 years.’”

Bea added, “They’re transformed after the show. That’s what’s fun. To see them come in, and when they leave, they’re totally transformed.”

While many Branson entertainers find a certain genre or even a certain tone for the music and songs they perform in their show, Famous Impressions has their own flow and spirit about them when it comes to music selection.

At one point in the show, Bea and Stiel went from performing the Alison Krauss hit “When You Say Nothing at All,” to Waylon Jennings’ and Willie Nelson’s “Mamas Don’t Let Your Babies Grow Up to Be Cowboys,” with Stiel singing as both Jennings and Nelson. If that’s not musical range, I don’t know what is?

As I said earlier, the mission behind the showcase performance last week was for the trio to learn if Branson would be a right fit for the impromptu humor and vocal and singing impressions of Famous Impressions.

“We want to spend some years here. We want to spend nine or 10 months out of the year here and then maybe go overseas,” said Stiel. “So that’s what we’re hoping for. If not this, God’s got something better. But I do think we’re supposed to be here, because there were so many signs for us to be here. It’s just been amazing to watch it happen.”

Following the performance, Famous Impressions released the following statement: “Positive feedback on the show has been incredible! The audience had amazing energy and enthusiasm. Many have asked if we are going to have a show in Branson. We will be making an announcement here very soon.”

So the question remains. Tim, how did you feel about the show? I’m proud to share that I throughly enjoyed myself. The comedy made me laugh, the heartfelt songs made me reminisce and the cow costume made me blush. Oh, did I forget to mention the cow costume? Well toward the end of the night, Bea came out on stage, dressed as a cow and gave an utterly impressive farmers rendition of “Hey Good Lookin.” I’ll be honest. I was mooved.

The show was a lot of fun. Based on the laughter and applause from the audience members sitting around me, I believe it’s safe to say they enjoyed themselves, too. I think they would be a fine fit for Branson, and I look forward to hearing what the longterm plans are for Famous Impressions.