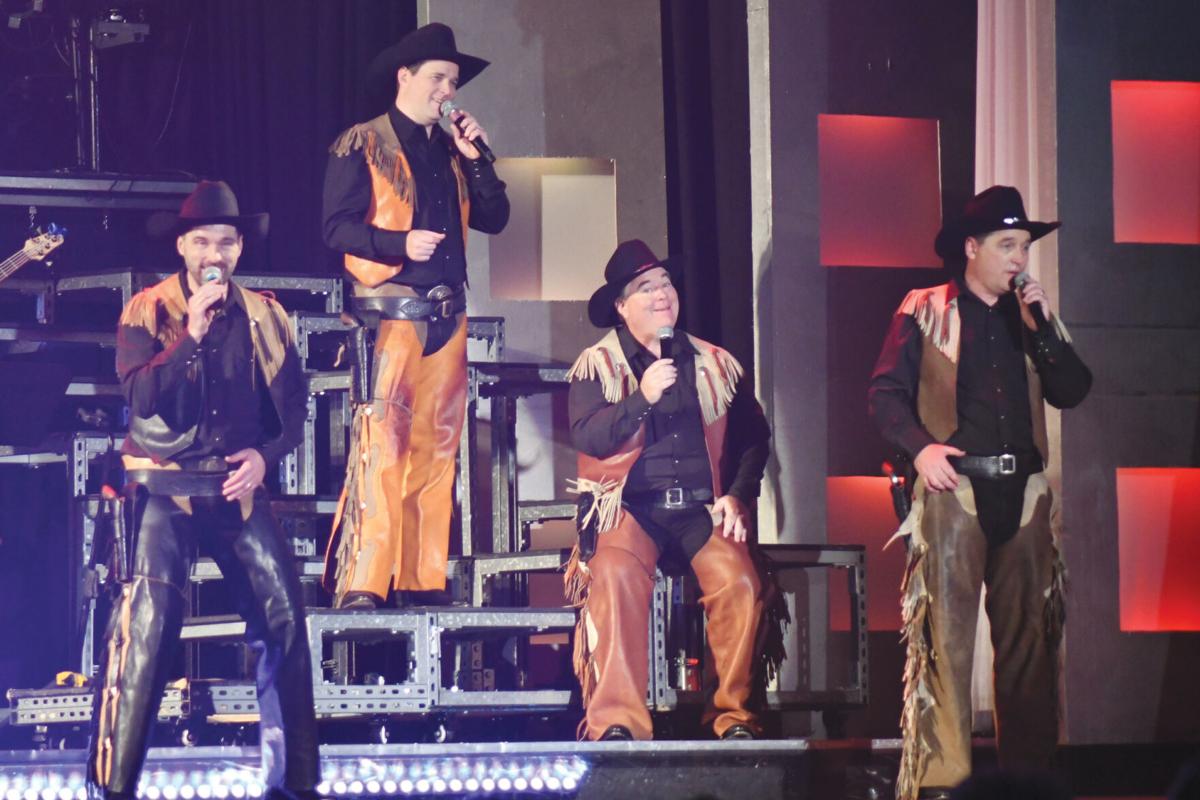 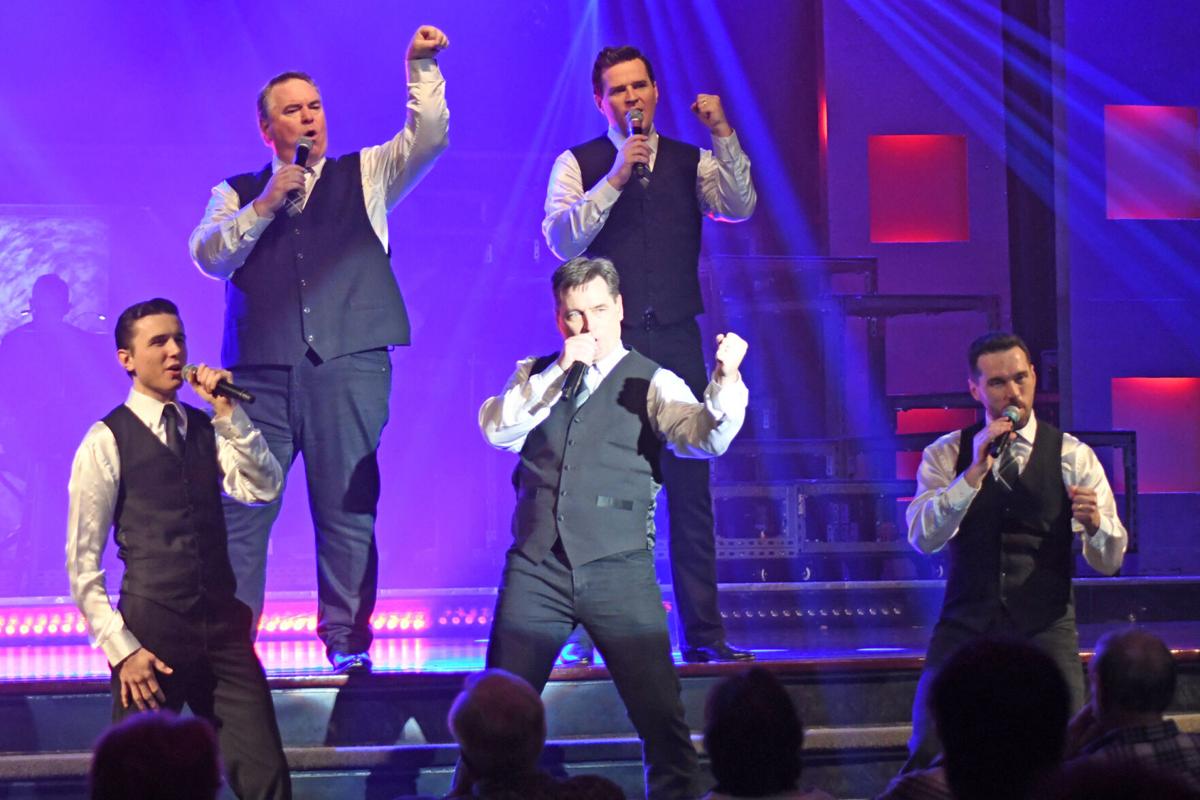 Joined on stage by son William Hughes, Marty, Jason, Ryan and Andy Hughes perform a few doo-wop hits in the second half of the show. 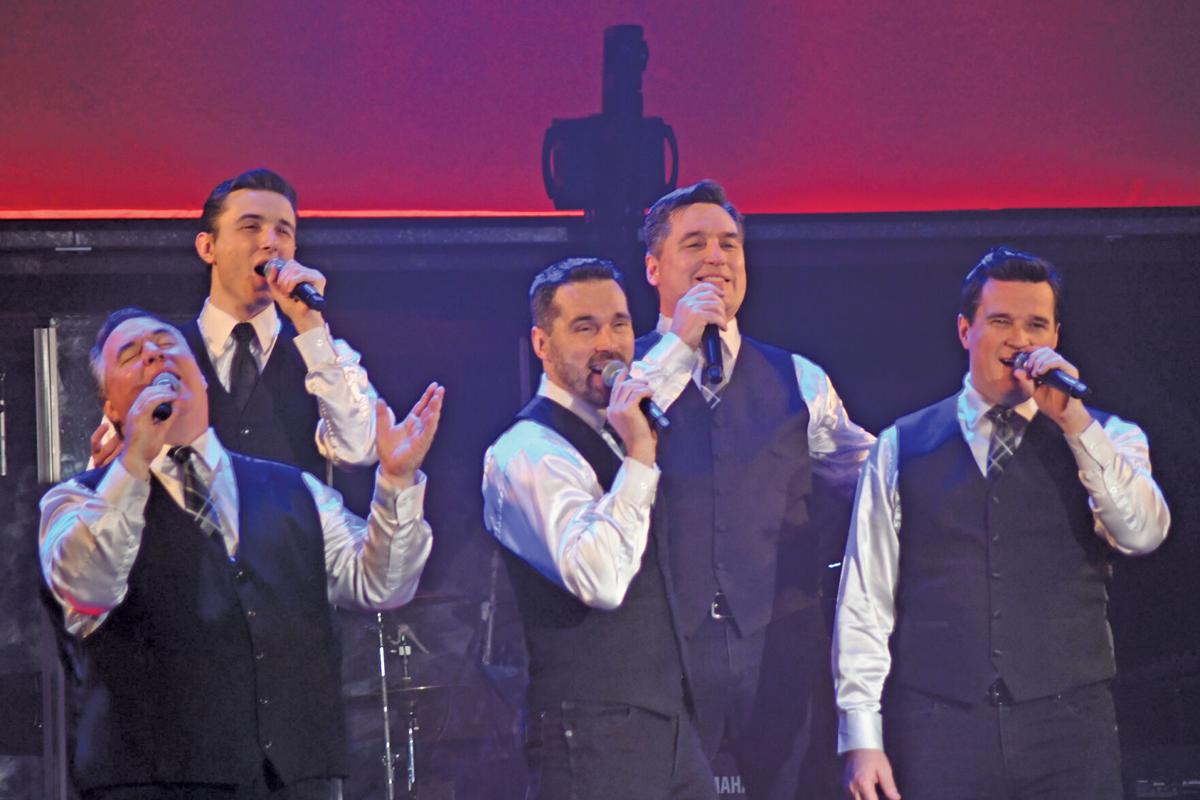 Marty, William, Ryan, Jason and Andy Hughes perform a few songs using their vocal talents to create a five-part harmony during the show.

Joined on stage by son William Hughes, Marty, Jason, Ryan and Andy Hughes perform a few doo-wop hits in the second half of the show.

Marty, William, Ryan, Jason and Andy Hughes perform a few songs using their vocal talents to create a five-part harmony during the show.

Launched in mid-September, the Hughes Brothers Country show features the headlining talents of Marty, Jason, Ryan and Andy Hughes. When folks familiar with the past performances of the Hughes Brothers go to their new show, they might be met with some deja vu.

“In a way it’s new, but in a way it’s also old in the sense that we used to do a lot of this show 25 years ago,” said Hughes Brothers member Andy Hughes. “A lot of people might remember when we did our westerns and our old country and the Faleena El Paso routine.”

In the show Hughes said audiences can of course expect country music, but also a variety of other entertaining elements as well.

“We do a lot of country music obviously, but it’s the 90’s country and some 80’s country. Also even further back than that. Marty Robbins and Sons of the Pioneers, westerns and things like that,” said Hughes. “We also do a little bit of doo-wop in the show. We also feature a small portion of our children, but the younger ones. The really cute ones. We have one of our daughters singing ‘Cowboy Sweetheart’ again and we also have a bunch of the boys doing ‘Momma’s Don’t Let Your Babies Grow Up to be Cowboys.’ It’s a real hoot.”

When the new show came to be last month, Hughes said it was the result of some forced inspiration.

“With the pandemic we realized that we needed to give people that were actually coming to Branson more options to see us. Since there is only a limited supply of people, we thought at least increase the supply of what we could provide,” Hughes said. “We looked at what we could do very quickly and thought, ‘Why not do a Hughes Brothers Country show?’ It came together quite quickly and a lot of people are enjoying it.”

Like many Branson entertainers, the Hughes family were all forced to shut down their shows when COVID-19 struck the state of Missouri. Hughes explained that, while they were able to eventually return to the stage, the family did take advantage of the downtime.

“When lockdowns happened we decided we would focus on some of the things we needed to spend more time on, like social media and getting our name out there on those genres. So we created a lot of videos and put that material out there,” Hughes said. “I think COVID lockdowns just gave us some of the same kind of feeling we always have, because we’re always together as a big family. Some families don’t see each other, because they’re working and stuff, but we’re working together anyway. Whether we’re doing projects at the house or working on shows here at the theatre. Some things were nice like spending a little more time getting projects done at the house.”

Since reopening their doors in May, Hughes said they’ve seen varied audience turnouts as time has gone by.

“We were actually getting better and better crowds up until August, and then we had a big dip. We had a mask mandate in Branson and that slowed it down a little bit,” said Hughes. “We encourage people to do all the things that are recommended by the CDC. We still have plenty of space to social distance in our theatre, and when people come and sit down, if they choose to because they’re social distanced, they can take their mask off. So they don’t have to try and breathe through a mask the whole show.”

As the regular season has nearly come to an end, Hughes said the family has already been putting in the work for their incoming performances of the Hughes Brothers Christmas Show, which begins Nov. 2.

“We’ll get you into the Christmas spirit regardless of what you’re going through. You’ll be able to have the true meaning of Christmas in the second half. We’ll also have a lot of fun in the first half. You just never know who you might see doing what in the new Christmas show, because who did it last year might be too big for their britches anymore, and we don’t want to buy new costumes,” Hughes said laughing. “We’re going to have more of the kids featured. Some new violinists. We also have, of course, a swath of kids doing new aspects of the show. Some are coming in to do numbers. We keep our Christmas show pretty much a similar format to previous years where we won ‘Best Christmas Show’ 11 years and running. So you won’t be disappointed.”

On top of the 2020 Christmas show, Hughes added that the family is also working on another all-new show that may make its debut before the end of the year.

“We want to open up this new show we’re putting together with the young adults and teens. They’re going to kind of be doing a kickback to the 80’s and maybe some other genre’s, but mostly 80’s. It’s a real fun show. High energy. Lots of dancing and lots of toe tapping stuff. If it doesn’t open this year, we’re going to have it open next year. We’re going to try and do some weekends probably in the winter.”

“If you’re brave enough to go to the grocery store, it’s safer to come to our show. I really believe that,” Hughes said with a laugh. “Nobody’s touching stuff, and we’re sanitized the seats. Everything is good. Happiness boosts your immune system, and it can give you a fighting capability.”

Visit hughes-brothers.com for showtimes and ticket information on the country show as well as other upcoming Hughes Brothers show productions.