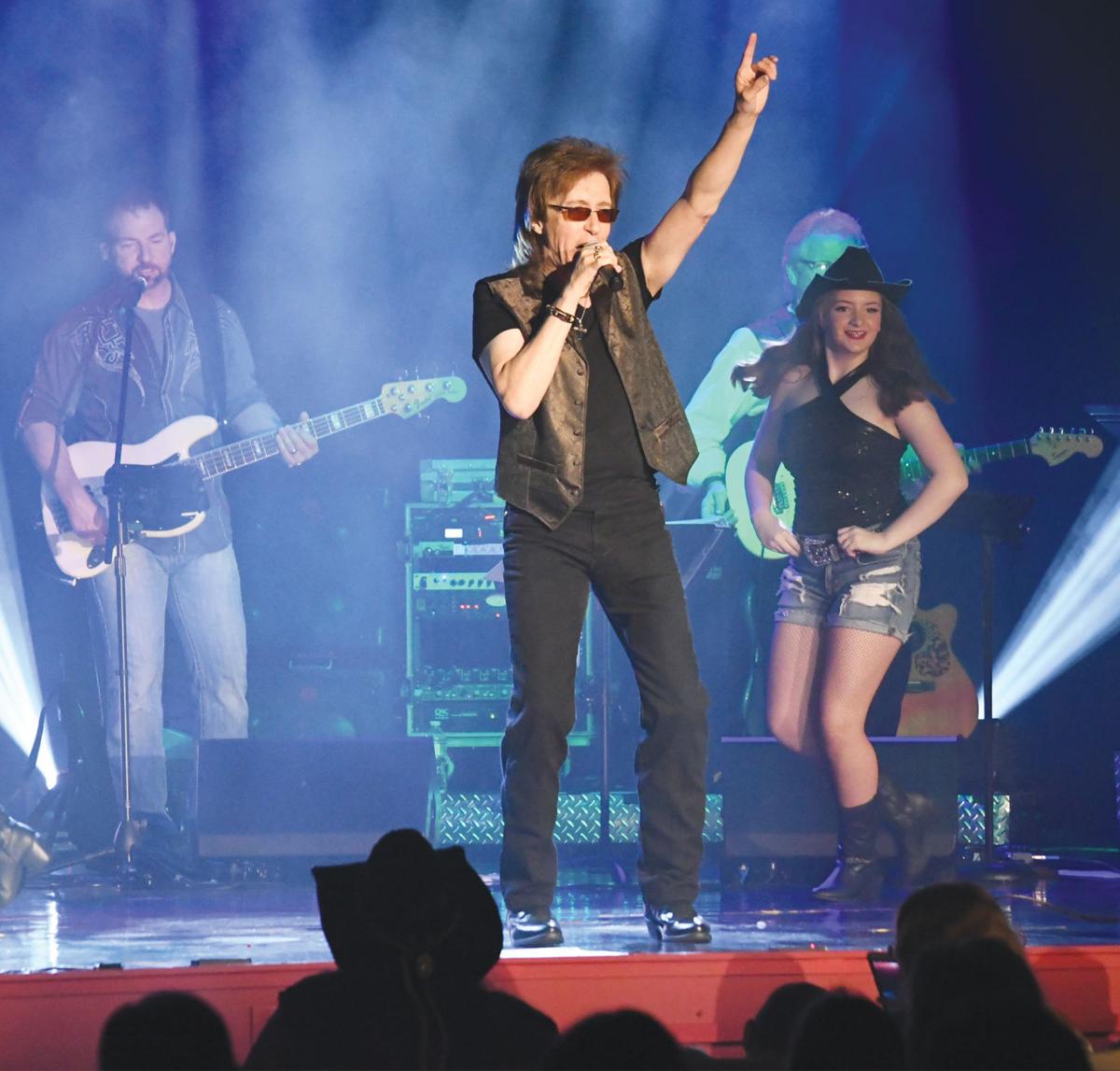 Stevie Lee Woods and his “Nashville Roadhouse Live” take the stage every week at the Branson Star Theatre. 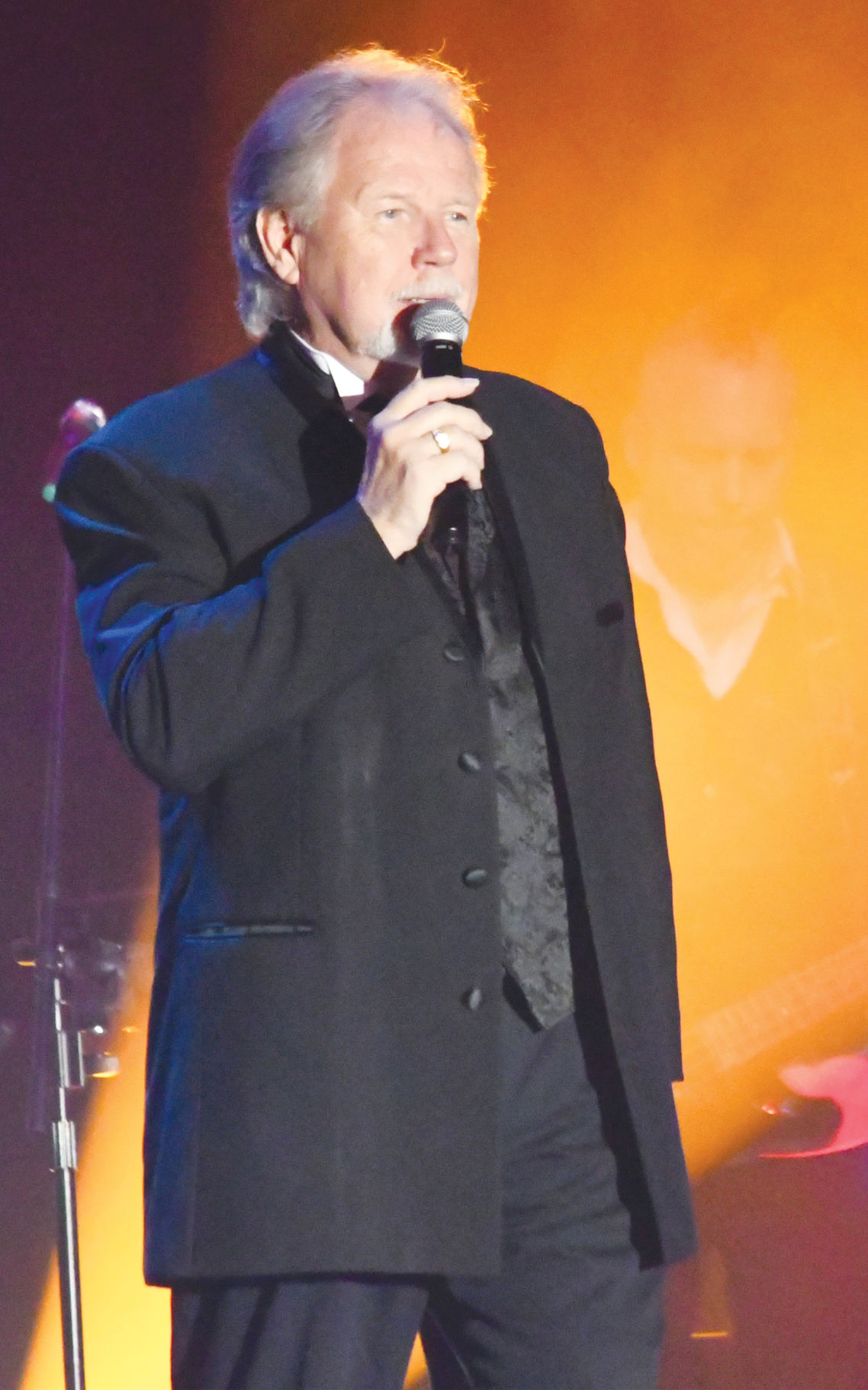 The “Women of Country Music” show at the Branson Star Theatre features the talents of Somer Dean. 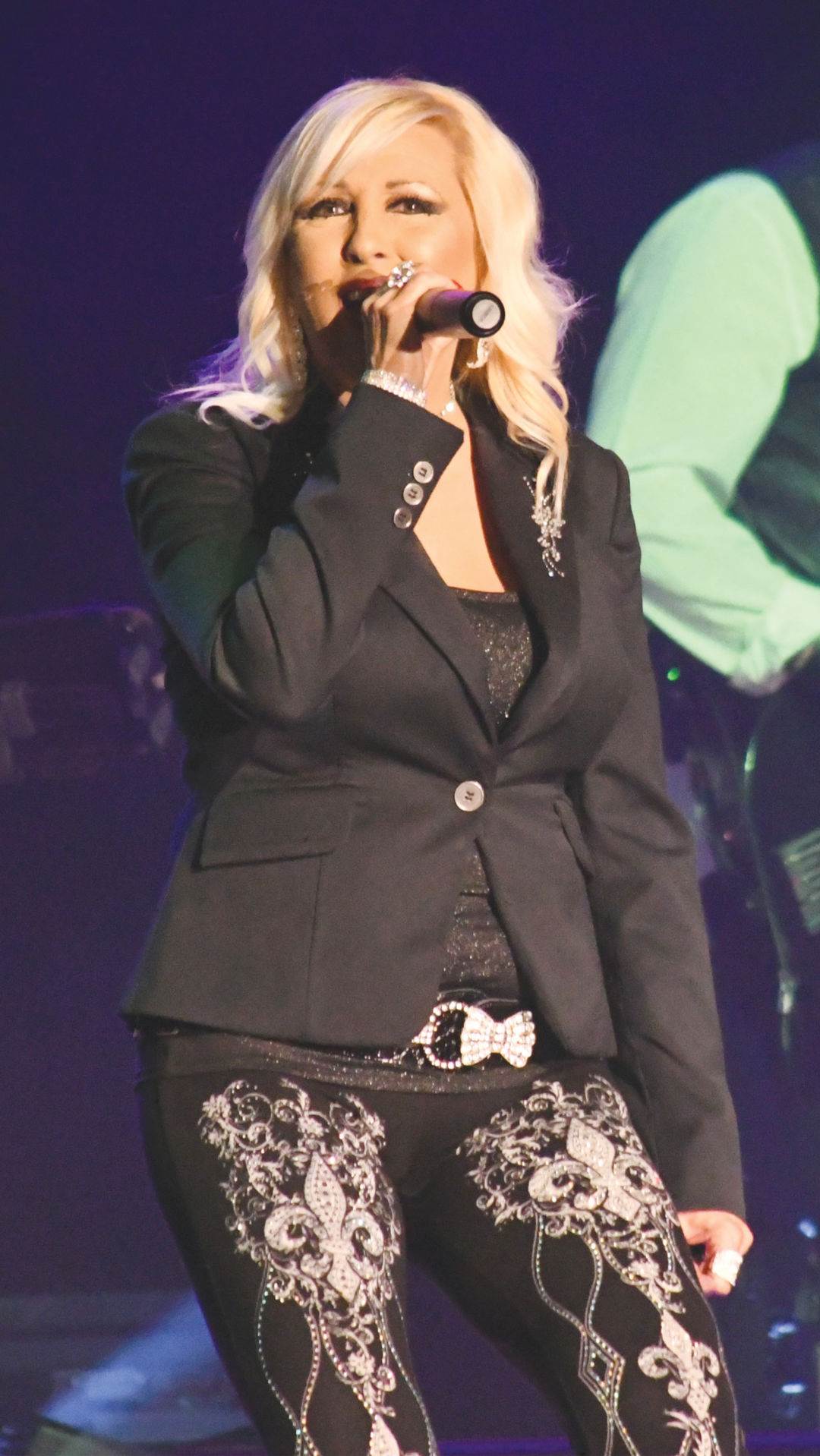 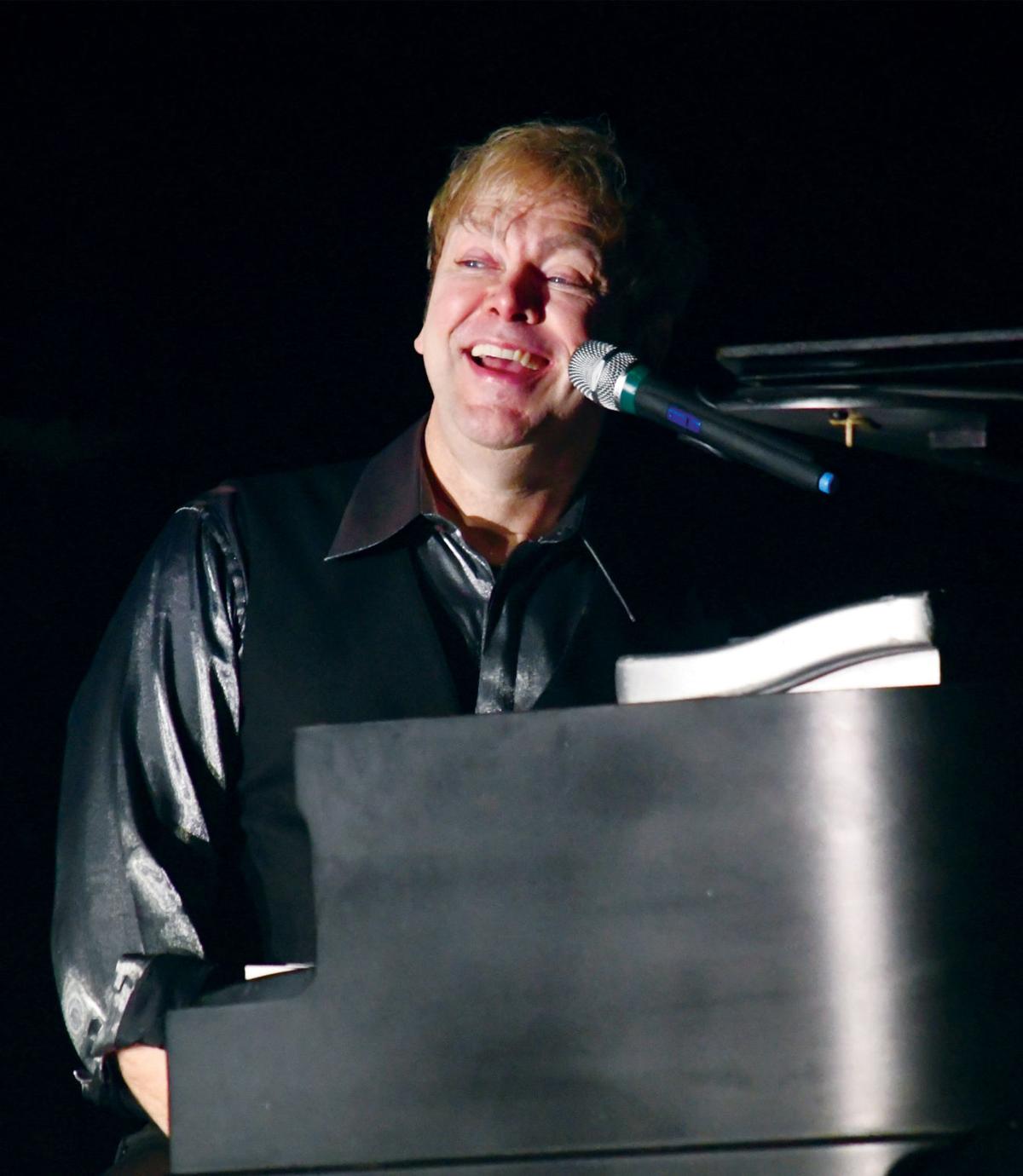 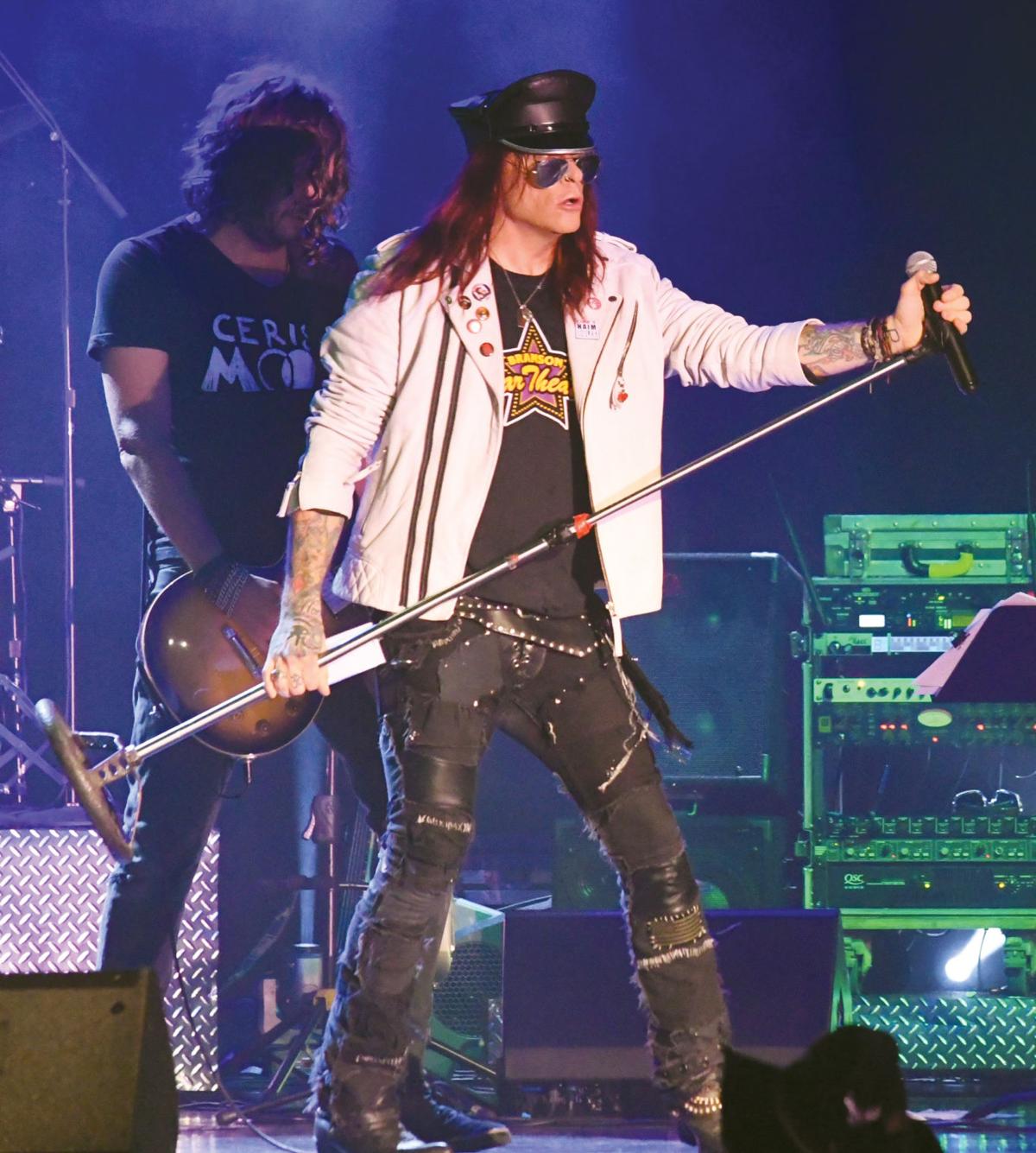 Colby Veil and the Hollywood Roses will perform every week this summer at the Branson Star Theatre.

Stevie Lee Woods and his “Nashville Roadhouse Live” take the stage every week at the Branson Star Theatre.

The “Women of Country Music” show at the Branson Star Theatre features the talents of Somer Dean.

Colby Veil and the Hollywood Roses will perform every week this summer at the Branson Star Theatre.

Last weekend, the folks at the Branson Star Theatre, located behind the Olive Garden just off Branson’s famous 76 Strip, hosted a showcase featuring a taste of several shows calling the venue home.

The Branson Star is home to two venues, a smaller theatre which seats more than 200 folks, and the “big room,” which can seat more than 1,300. The  aforementioned “big room” is home to the “Nashville Roadhouse Live” starring Stevie Lee Woods, Kathie Baillie & The Boys, along with a different national touring act each week.

According to Woods, many of the “bigger” acts had to reschedule their performances due to the pandemic.

“We had to push some of the bigger acts back while we work through COVID, so they are coming in July and August,” he said. “We’ll have the smaller National acts coming in the first part of June, then we’ll be wide open.”

Visit bransonstartheater.com, as well as their social media pages for updates on who will be joining the “Roadhouse” cast every week.

While “Nashville Roadhouse Live” has been called “where country meets rock ‘n’ roll,” the venue’s newest show, “Hollywood Roses,” take that rock ‘n’ roll label and run with it as they perform a tribute to Guns N’ Roses.

Hollywood Roses take the stage Sunday through Wednesday night in the “big room.”

As far as the shows in the “smaller venue” go, we got a sneak preview of the “Kenny Rogers Tribute starring Rick McEwen,” the “Women of Country Music” with Phaedra Clemons, Brenda Rose and Somer Dean, and “The Piano Man Xperience” starring David Brooks. With that lineup, there is most assuredly something for everyone at the Branson Star Theatre.

Keep reading the Branson Tri-Lakes News and Branson This Week for more on all there is to see and do at the Branson Star Theatre.

Visit bransonstartheater.com, as well as their social media pages for the most up-to-date information.

Wednesday sees “Parrotville” return to the Jim Stafford Theatre. “Parrotville” is billed as a “good-time party show” featuring a boatload of tunes made famous by Jimmy Buffett, as well as a few others you may find in a beach party playlist.

According to the theater’s General Manager Chris Wainscott, the venue has fully embraced a “party vibe,” and as a massive “Parrothead” myself, I can’t wait to go check out the 2020 version of the show.

The show features more than 30 horses and cast of trick riders and performers challenging each other in barrel races, tricks and other friendly competition.

Stampede also showcases a thundering herd of buffalo, a westward cattle drive of longhorn steer and hilarious racing pigs, a 35,000-square-foot arena, complete with music and special effects, including interactive lighting with a 12.5 million LED wall.

While all that is unfolding on the arena floor, the staff begins serving their signature meal, which starts with the Stampede’s original creamy vegetable soup and homemade biscuit. From there, plates are piled with a whole rotisserie chicken, hickory-smoked barbecued pork loin, buttery corn on the cob, an herb-basted potato, and finally, the Stampede’s own specialty dessert.

Like all businesses, Dolly Parton’s Stampede Dinner Attraction is also taking steps to help prevent the spread of the COVID-19 virus. According to the website, management has reduced capacity to less than 50 percent, and have structured seating to allow 6 feet separation between each party.

All surfaces will be cleaned and sanitized before, during, and in between all performances, and the entire facility will be deep cleaned every night after closing. All staff interacting with guests are wearing face masks.

Also, all guests are required to wear face masks when entering, moving around, and exiting the facility. Additional hand sanitizing stations are available for guest use throughout the facility.

Plus, all guests will be asked three questions provided by the CDC and have their temperature checked before entering the facility.

For more information and reservations, visit dpstampede.com or call 417-336-3000.

Also set for a Wednesday return is the Branson Imax Entertainment Complex, as well as many shows at the Little Opry Theatre.

Wednesday will see the Elite Theatre venue reopen with Tim Hadler starring in his “Hank Williams Revisited Show” at 9:30 a.m. This show features Hadler, a “dead ringer” for Williams, telling the tale of his life as a performer, told through the eyes of a true fan. Between performing Williams’ biggest songs, Hadler also provides a history lesson on the life of Williams and the impact he had on country music, as well as the compassion he had for other people.

“Hank Williams Revisited” takes the stage every Wednesday at 9:30 a.m. inside the Elite Theatre, and every Thursday at 2:30 p.m. in the Little Opry Theatre through July. Hadler will shift to 2:30 p.m. shows most Thursdays from August 12 through Dec. 9.

During this show, Garrett, who spent time with two-time Grammy winning group the Kendalls as lead male vocalist and rhythm guitar player, takes audiences on a stroll through the “Country Roads” of Denver’s career, from deep cuts to the top of the charts, and everything between.

While telling stories about Denver, Garrett also intertwines stories of his own life and experiences with the Denver family.

Showtimes for the “Tribute to John Denver” show are 10 a.m. Monday through Sunday, with the exception of three weeks in August, through December.

The noon slot sees Garrett return with “The Glen Campbell Songbook.” Garrett, who is not an impersonator, tells the story of Campbell by using his greatest hits and hidden gems.

Showtimes for “The Glen Campbell Songbook” will be noon Wednesdays and Fridays, with the exception of three weeks in August, through Dec. 11.

The “Sons,” as they’re known, include Earl Vaughan, Randy Plummer  and Louis Darby, begin each show with a couple of per-determined tunes before opening things up for requests. This is one of the only shows in town where the audience is in charge.

Showtimes for the “Sons of Britches” are 5 p.m. almost every Wednesday,  2:30 p.m. most Fridays and Saturdays, and 8 p.m. most Sundays and Mondays.

“George Jones and Friends Remembered” is featured in the Elite Cinema at 9:30 a.m. Tuesday and Thursday, and inside the Little Opry at 5 p.m. Friday, Saturday and Sunday through Dec. 12. No shows are scheduled for the month of August.

Showtimes for “Neil Diamond Gold” are noon Monday, Tuesday, Thursday and Saturday, with the exception of three weeks in August. Garrett will also perform an 8 p.m. show Christmas night.

Garrett’s slate of shows fully open with his “George Strait Country” show at 5 p.m. inside the Little Opry Theatre July 2. Garrett covers “as many of George’s 57 No. 1 hits” as possible over the course of the two hour show.

Showtimes for “George Strait Country” are 5 p.m. Monday, Tuesday and Thursday, with the exception of three weeks in August.

“Smoke on the Mountain,” an off-Broadway musical comedy, written by Connie Ray and conceived by Alan Bailey, is set in 1938 and follows the exploits of the singing Sanders family, who perform traditional and bluegrass gospel songs for the members of the Mount Pleasant Baptist Church in Mount Pleasant, N.C.

As the members of the family begin to show up to the church, their individual stories, as well as their beliefs, are shared during a church service. Unlike most shows in the area, the audience has a part to play, as well. They serve as members of the congregation.

“Smoke on the Mountain” takes the stage at 8 p.m. Tuesday through Sunday, with the exception of two weeks in August, through Oct. 17. The “Smoke” sequel, “Sanders Family Christmas,” opens Nov. 3 with 8 and 5 p.m. shows, depending on the day.

Both of these services are free to attend.

Monday, July 6 will see another new show debut in the form of “Rick McEwen’s Big Show” at 2:30 p.m. In addition to being a Branson staple for more than 30 years, McEwen is a Traditional Country Music Hall of Fame Inductee, Male Vocalist of the Year nominee and two-time bass player of the year.

According to the website, “Rick McEwen’s Big Show” will be “packed with classic country, classic rock, gospel, bluegrass and more.

“Rick McEwen’s Big Show” takes the stage at 2:30 p.m. every Monday, with the exception of three weeks in August.

Tuesday, July 7 at 2:30 p.m., Little Opry Favorites The Petersen Family Bluegrass Band are back for the first of their 2020 shows. During “The Petersens,” the family performs traditional bluegrass standards with a contemporary twist, as well as gospel a capella, original songs, comedy and more.

“The Petersens” take the stage at 2:30 p.m. every Tuesday, with the exception of one week in August, and one week in November. In September and October, they will add Thursday shows to the mix.

Wednesday sees “The Petersens Gospel” show debut at the Little Opry. This show is set to feature gospel favorites to “warm your heart and lift your soul.”

“The Petersens Gospel” show takes the stage at 2:30 p.m. every Wednesday, with the exception of one week in August, and one week in November. They’ll switch to a “Gospel Christmas” show in November and December. Visit bransonimax.com.