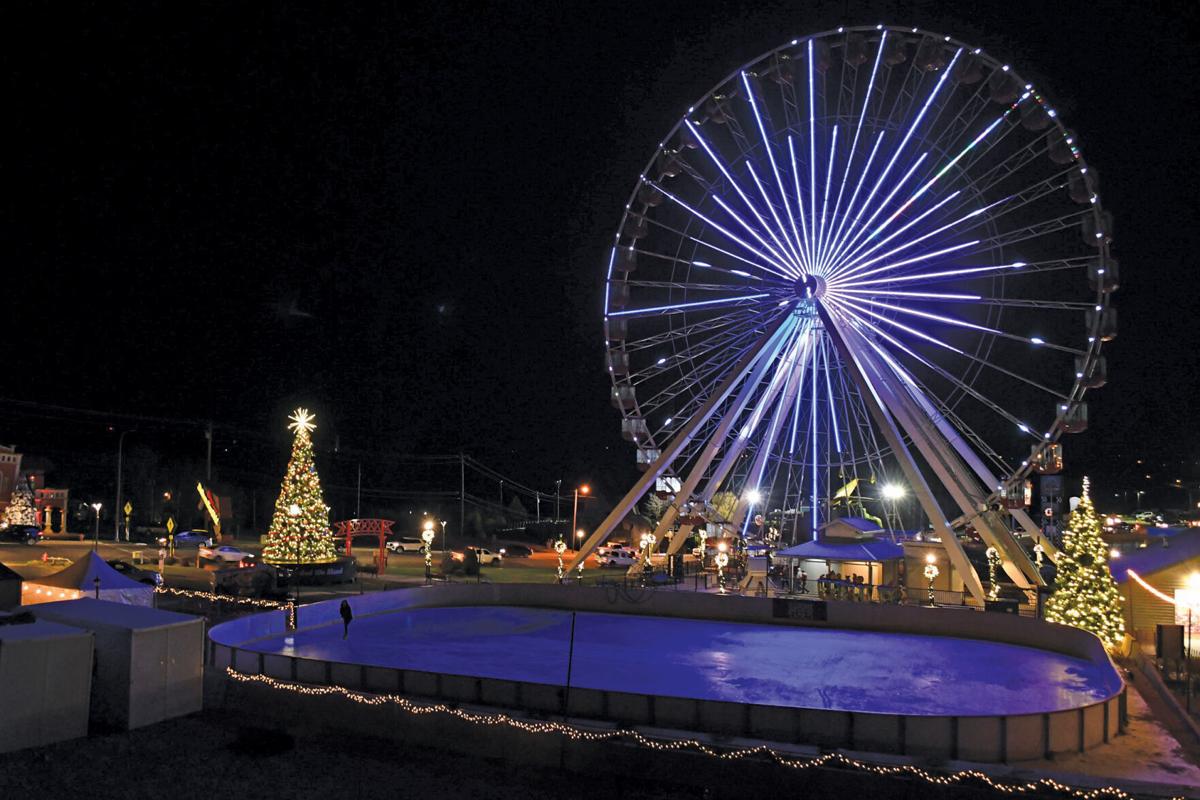 The Holidays on Ice celebrates the Saturday opening of its new ice rink next to the Branson Ferris Wheel. 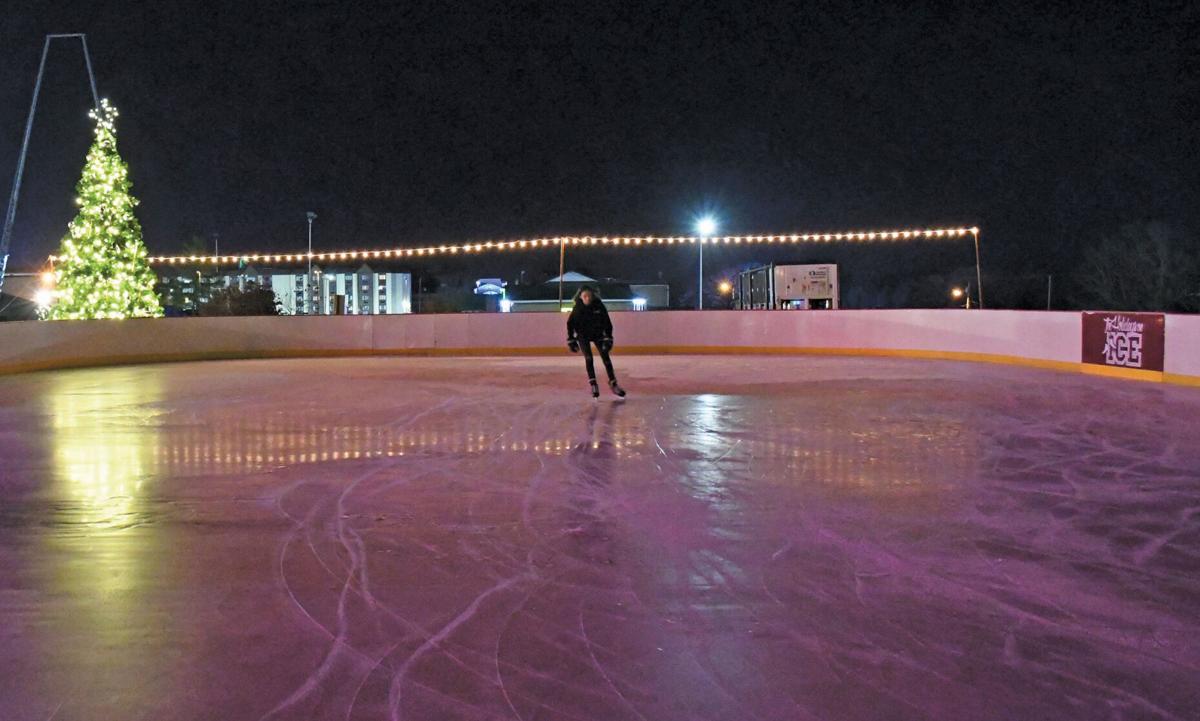 Nylah Yakkey, daughter of owner Rich Yakkey, tests out the ice on Nov. 12, a couple days ahead of opening day. 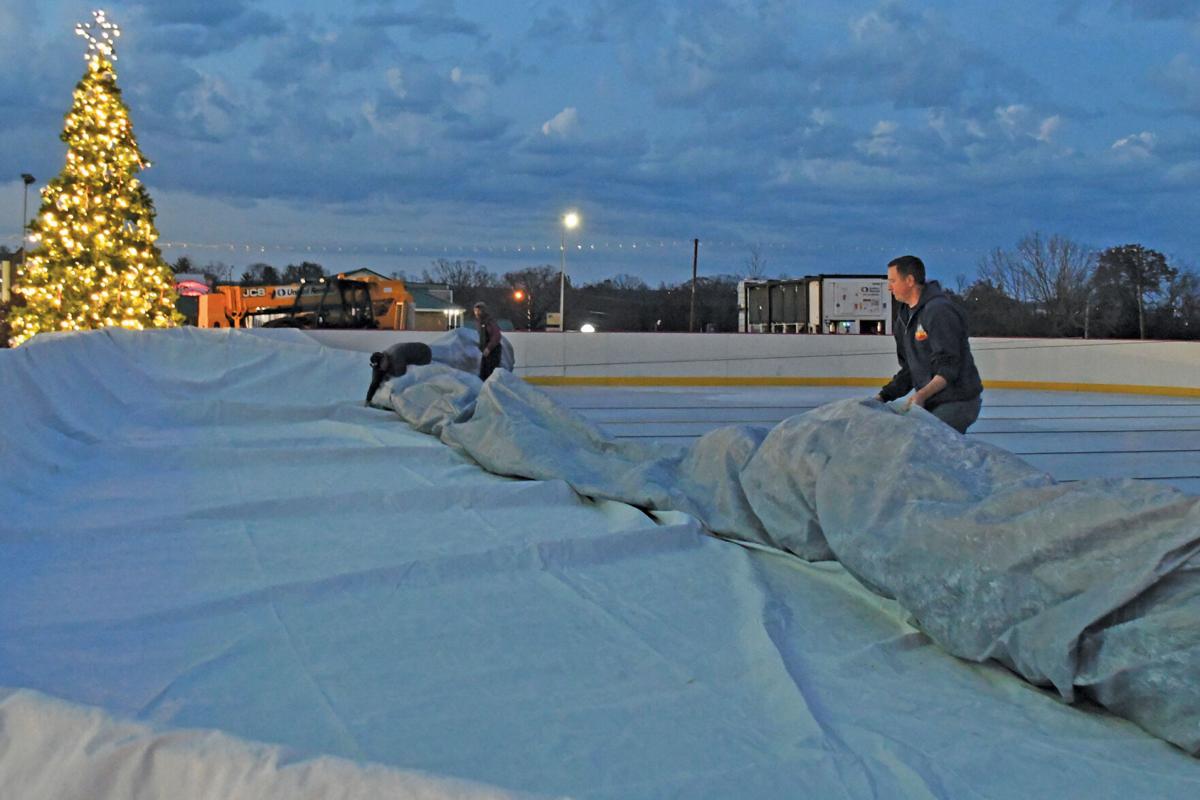 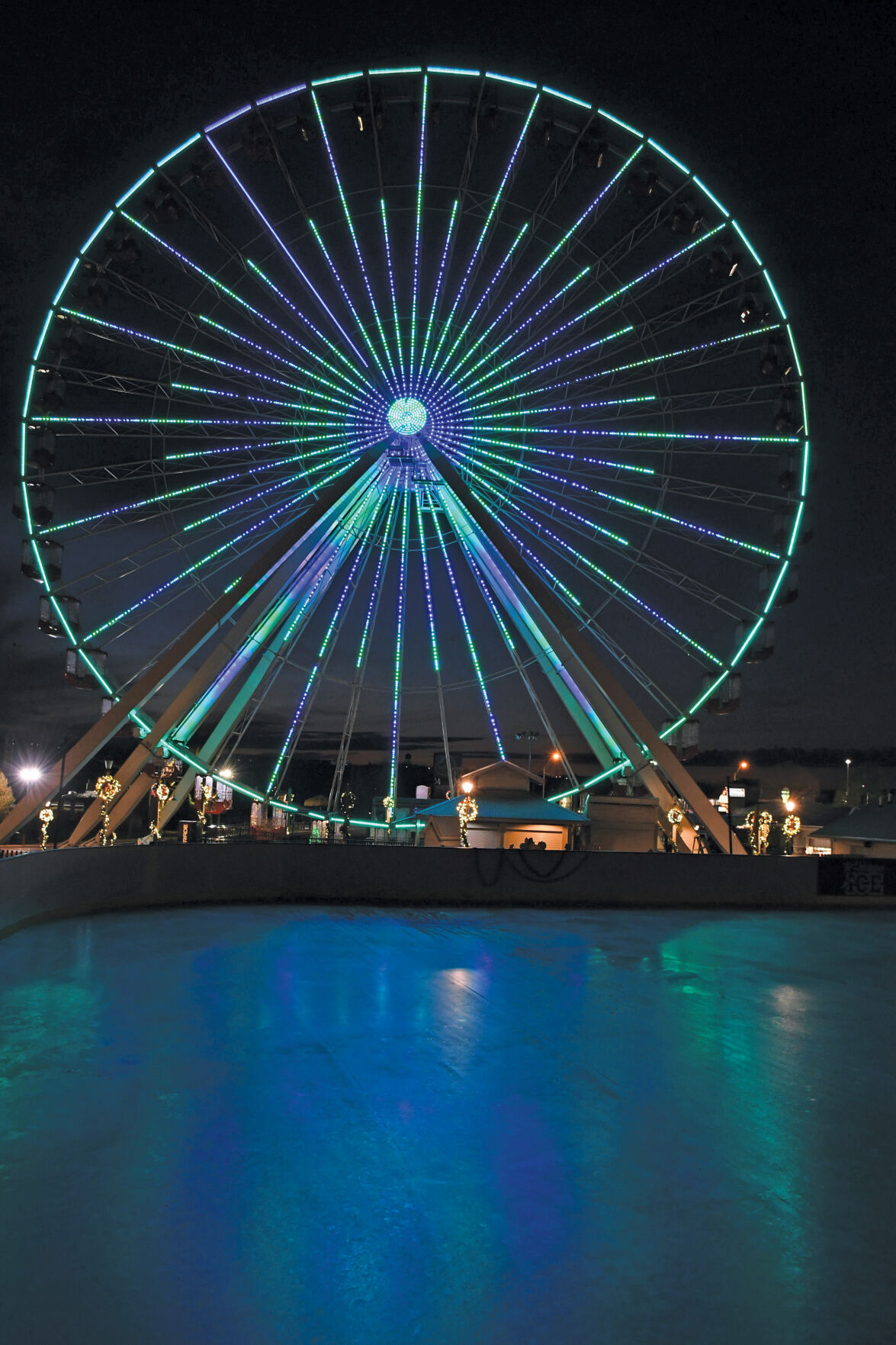 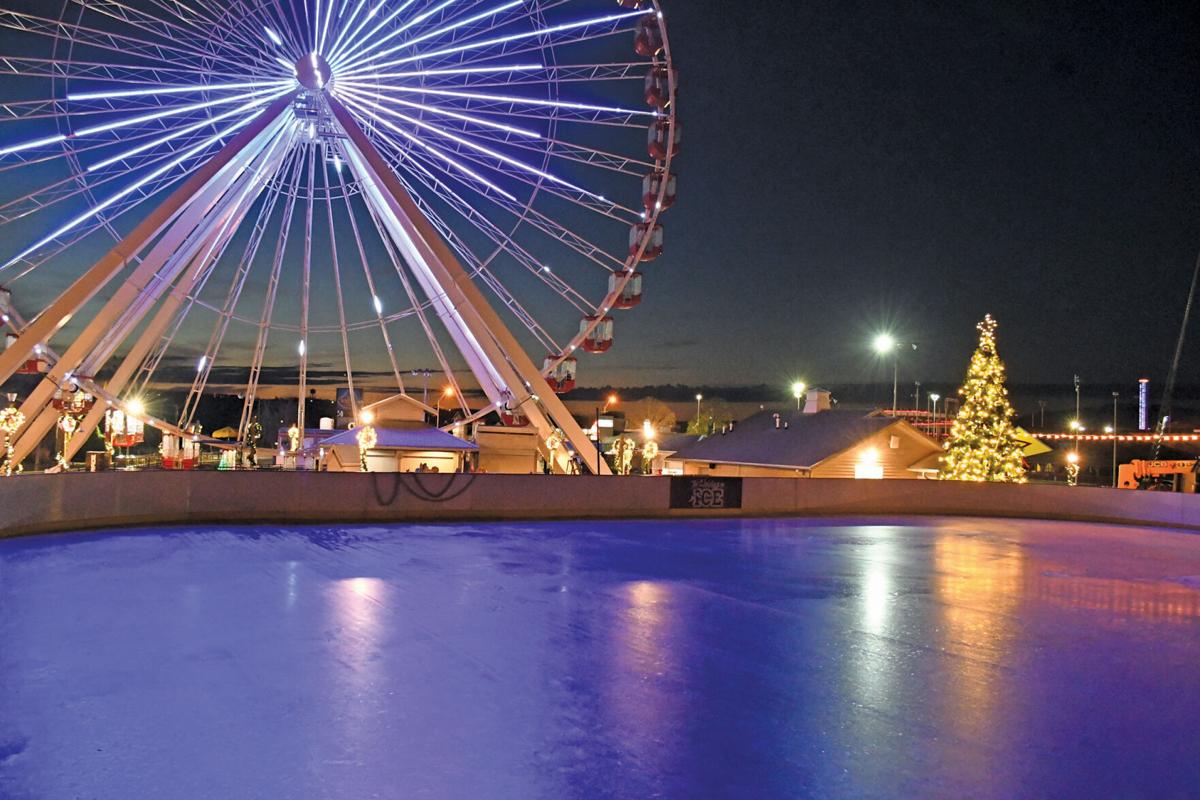 The Holidays on Ice celebrates the Saturday opening of its new ice rink next to the Branson Ferris Wheel.

Nylah Yakkey, daughter of owner Rich Yakkey, tests out the ice on Nov. 12, a couple days ahead of opening day.

The Christmas season is officially underway in Branson and a new local attraction is giving folks the chance to really get into the holiday spirit.

Only two short weeks after arriving in Branson, The Holidays on Ice officially opened their ice rink to the public on Saturday. Thanks to an partnership with The Track Family Fun Parks, the all-new area ice rink is uniquely located beneath the Branson Ferris Wheel and the newly unveiled Branson “United We Stand” Community Christmas Tree.

The Track Family Fun Parks announced after press time that they would be hosting a grand opening celebration for the new ice skating rink on Wednesday, Nov. 18 at 5 p.m. "Catch Santa arrive by helicopter and be the first to step onto the ice with his two helpers. After Santa's inaugural skate, the ice rink will officially be open for business."

While they traditionally would have found themselves in the northwestern part of the United States this holiday season, The Holidays on Ice Owner Rich Yakkey said due to the pandemic they had to find a new city to host their traveling ice rink.

“Several years back in 2015, after I came off my first ice rink I searched ‘Christmas Towns’ online and I saw Natchitoches, Louisiana and Branson and Leavenworth, (Washington). I reached out to about five different cities in different states. Leavenworth reached back out to me, so we went up there and set up shop last year,” said Yakkey. “But COVID shut that town down this year, so we had no place to put the rink.

“So I went right back to Google and I found Branson. So I reached back out to them and that’s when me and Craig (Wescott) got in touch with each other and we started to talk about putting this together.”

The Track Family Fun Parks CEO and Co-Owner Craig Wescott shared that before Yakkey and his team arrived they prepared the site for construction of the rink.

“We’ve got the site prepped, which was basically making the ground flat. As we know, that doesn’t exist here. So we had to flatten the ground out and pull the right power in, which we thankfully have thanks to the Branson Ferris Wheel,” said Wescott. “It’s been a cooperative effort. The city has assisted us with some fill and barriers. So it’s truly been a community effort, which I love probably that part as much as anything.”

Yakkey added that once they arrived in Branson they were able to get right to work to construct the rink.

“At that point we just hook into the power, lay down all the matting and get going. We role it all out, bring the chiller in, turn the chiller way down and freeze,” said Yakkey. “The chiller does keep the rink frozen, but the tubing is what we lay down in a grid system. The chiller is a big 230 ton ice machine that just pumps down the temperature way low. That’s when we freeze the ground and that’s about it.”

Traditionally it takes anywhere from about a week to 12 days to complete the full construction process, but as this is their sixth season Yakkey said they’ve about got the set up of the rink down to a science.

Wescott shared that the ice rink here in Branson will be 7,200 square feet, which is the same size as one of the most famous ice rinks.

“It’s a lot of ice to build,” said Wescott. “It’s the same square footage as the rink at Rockefeller Center in New York City, which I think is a pretty neat fun fact.”

The Holidays on Ice is also a family operation and they provide everything you’ll need to enjoy some fun on the ice, including cups of hot chocolate.

“We rent the ice skates. We have everything on hand. We’ve got little small pushers for the kids. We’ve got a full Zamboni, which resurfaces the ice and makes it nice and clean and flat. My wife and my two kids and my mother-in-law, they’re the staff. So they’re the ones that run the whole front operations. I’m just in the back.”

General admission into the rink is $15 with a skate rental or just $13 without a skate rental. The Holidays on Ice will also be selling a 10-time punch card for $120 and offering a 10% military discount. Yakkey said with a general admission ticket, skaters are free to spend the entire day on the ice.

“We don’t have time limits. If you want to come in and skate, most ice rinks give you an hour or an hour and a half or two hours,” Yakkey said. “We just say, ‘Skate as long as you want to skate for the day.’”

The ice rink will be open now through at least New Years Day. The operating hours of the ice rink will depend on the weather, but Wescott shared that the initial plan is to have the rink open during the day and the night.

Those night skating at the ice rink will also be able to check out the Branson Ferris Wheel’s Christmas Electrify: A Music and Light Spectacular, which will feature two Christmas light shows that ignite the night with 16,000 LED lights dancing to traditional and rocking Christmas music every hour on the hour after dark.

“Come on out and have a good ole time out here with us,” said Yakkey. “We’re going to work as hard as we can to do the best we can and make the best environment for them to have a good time in.”

For additional information visit bransontracks.com/ice-skating or theholidaysonice.com for pricing and hours.