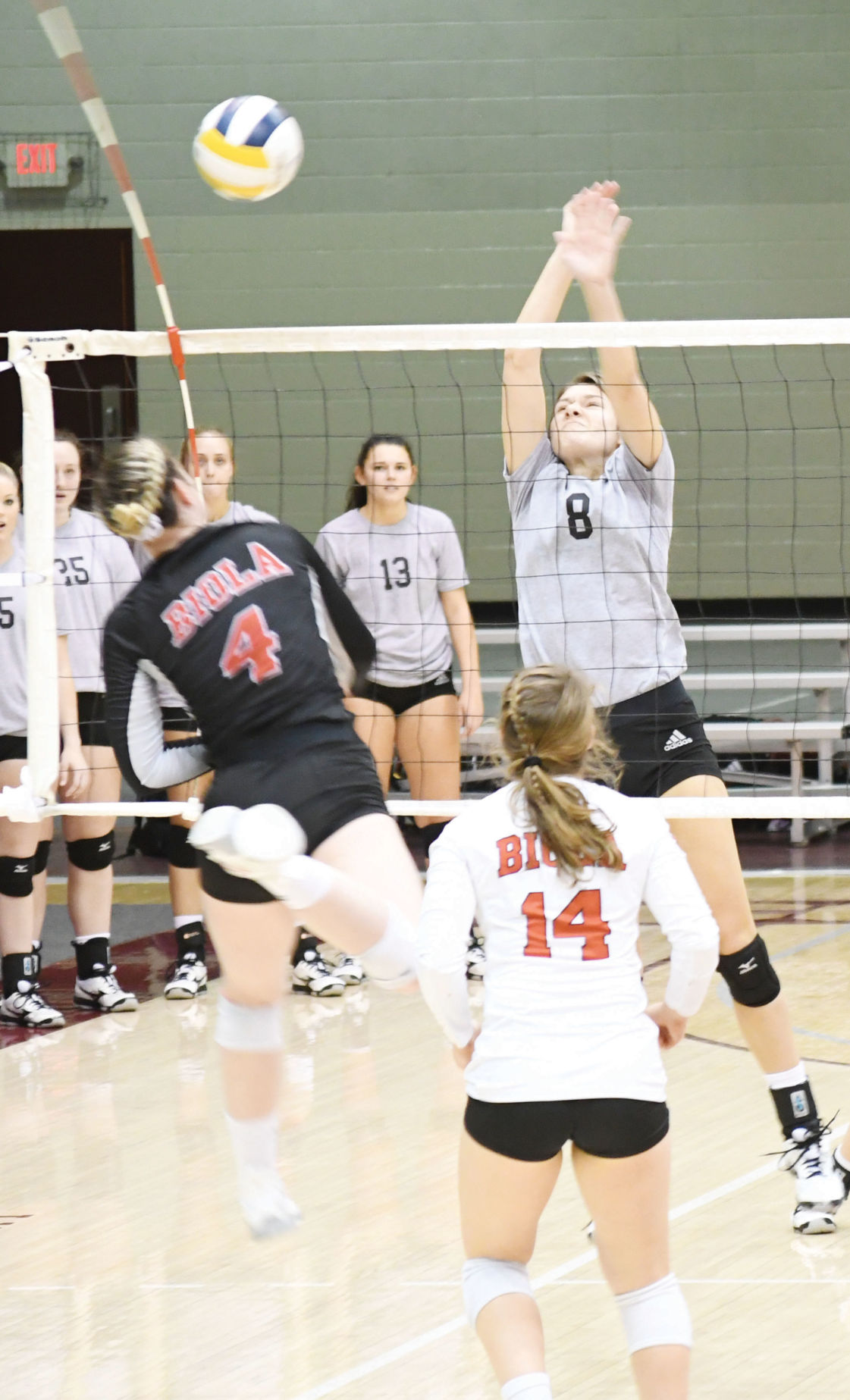 Rielly Wallace earned All-American honors in each of her first three seasons at College of the Ozarks, helping the team to an NCCAA Tournament runner-up finish last year. 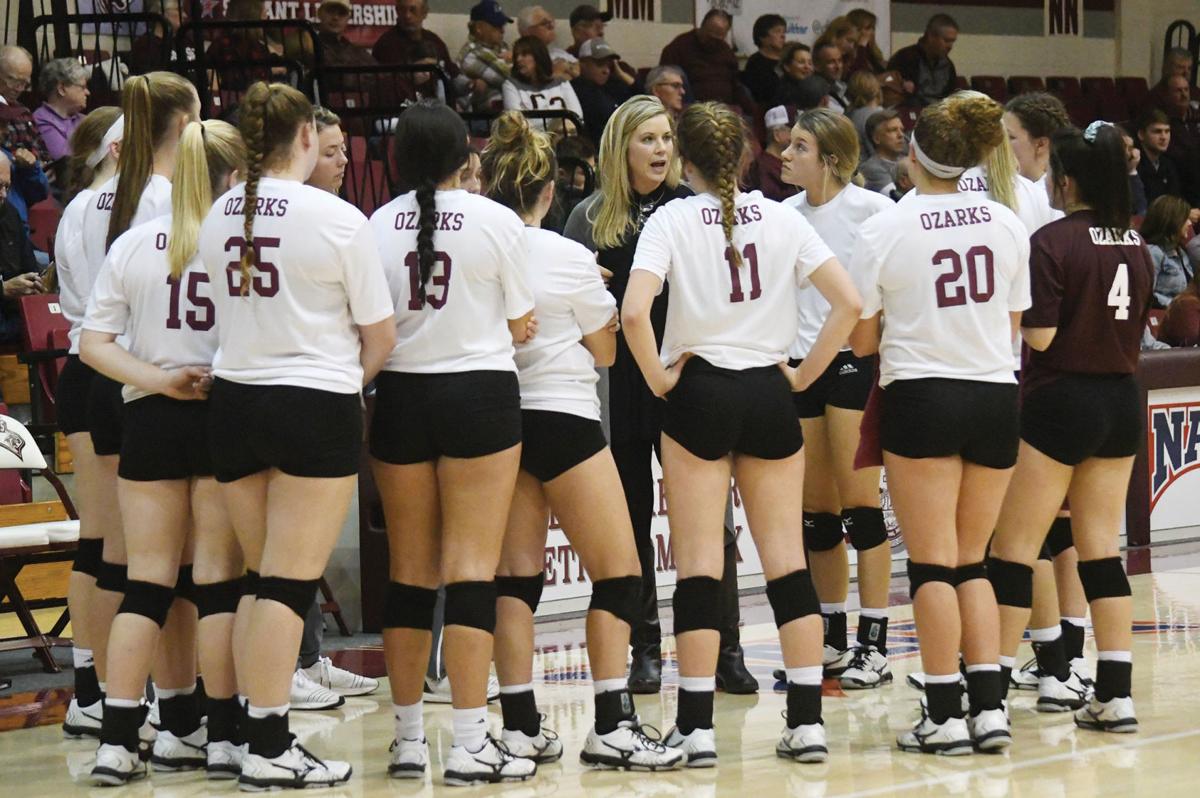 Stacy Muckenthaler (center) is entering her sixth season as the head coach of the Lady Bobcats. After last season’s 33-7 finish, she has a career record of 126-64. 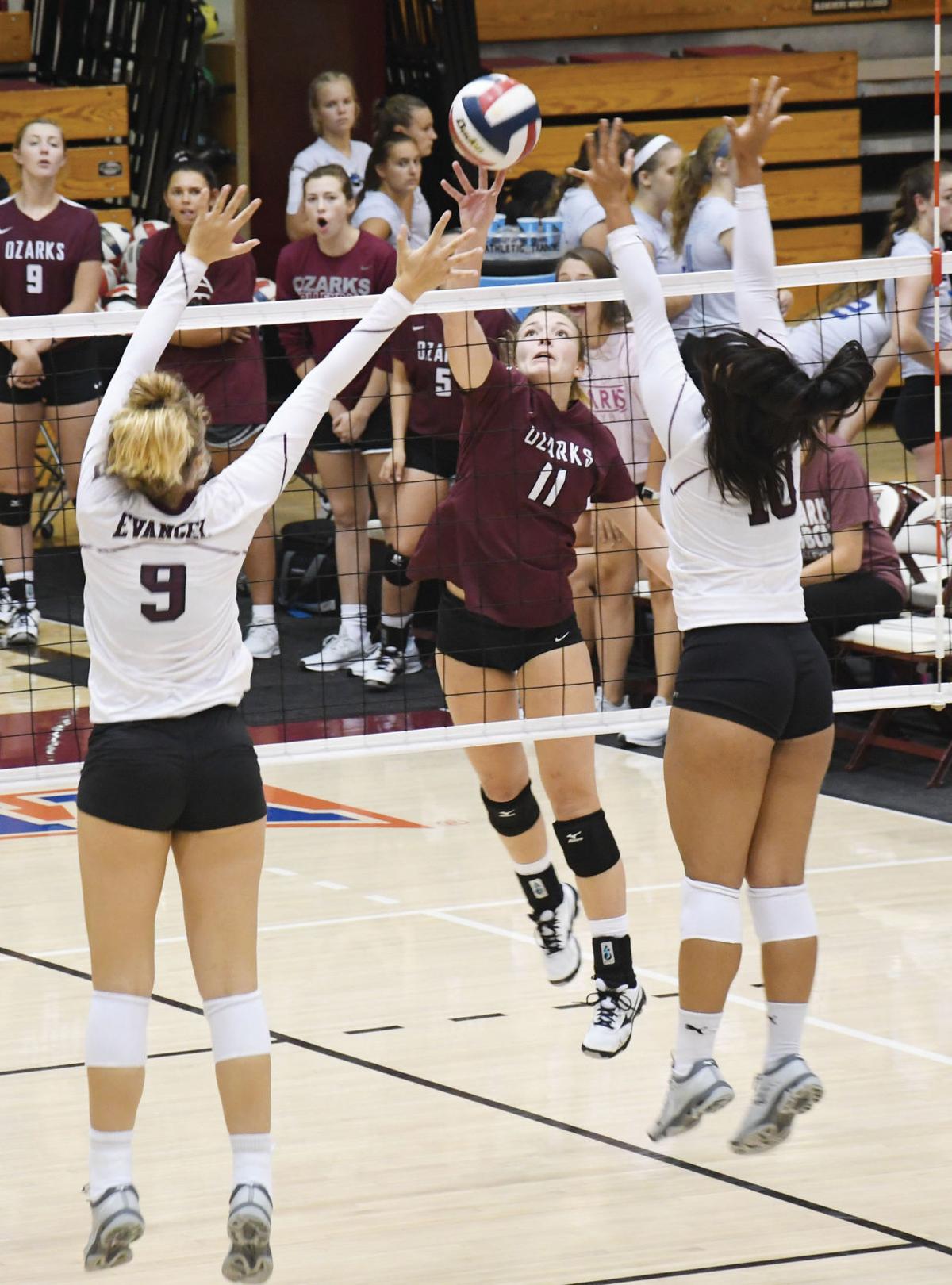 Ryley Thixton is back for her junior season at College of the Ozarks, after a sophomore year where she finished with 270 kills, 393 digs and 29 service aces.

Rielly Wallace earned All-American honors in each of her first three seasons at College of the Ozarks, helping the team to an NCCAA Tournament runner-up finish last year.

Stacy Muckenthaler (center) is entering her sixth season as the head coach of the Lady Bobcats. After last season’s 33-7 finish, she has a career record of 126-64.

Ryley Thixton is back for her junior season at College of the Ozarks, after a sophomore year where she finished with 270 kills, 393 digs and 29 service aces.

Four years ago, Rielly Dobbs was a senior at Nixa High School, putting her volleyball talents on display throughout southwest Missouri.

Stacy Muckenthaler was the coach at College of the Ozarks, and to be frank, she didn’t want much to do with Dobbs.

She had been recruiting Dobbs, hitting the road to watch her play, and she sensed a lack of caring and a lack of energy with Dobbs on the court.

So Muckenthaler pulled back and stopped pursuing her.

Flash-forward four years, and Dobbs – now Rielly Wallace after a summer marriage – has been a standout during her entire career with the Lady Bobcats. And Muckenthaler? She has never been so happy to be wrong about a player.

“We’re thankful that she’s on our side of the net,” Muckenthaler said with a laugh during a recent practice session.

After she decided to pull the plug on the recruitment of the talented setter, Muckenthaler noticed other schools – and more schools – picked up the pace in pursuing her.

“I figured I must be missing something big,” Muckenthaler said. “Then I got to know her, and I’m very thankful that I did.

“She never appears frustrated, so it almost looks like she doesn’t care.”

It wasn’t that Wallace didn’t care. It’s just that she has such an even-keeled personality, it’s easy to misinterpret her level of caring.

“That’s her on the court, off the court,” Muckenthaler said. “She’s just incredibly steady and even-keeled. Her highs aren’t too high, her lows aren’t too low.

“At first, I wished there was more energy out of her. But now, I’m thankful that there’s not. She’s one that people naturally gravitate toward because she’s unusually calm. It’s been really helpful.”

Asked if Wallace sometimes even needs to keep her coach calmed down, and Muckenthaler didn’t hesitate in saying, “Oh yes.”

That calm demeanor is not something that Wallace ever really focused on when she was in high school and early in her C of O career, but she’s fine playing that role of caretaker on the floor.

“Now it’s something I keep in mind, knowing my teammates and knowing how much they are depending on me to be calm and to show self-control,” Wallace said. “It’s definitely something that I’m mindful of and I strive for.”

Wallace has played such a big role for the program that while Muckenthaler doesn’t want to think about L.A.R. – Life After Rielly – she has made replacing her a huge priority. The school’s first two commits from the Class of 2021 are setters.

“The Bellevue (Nebraska) coach – and they’re a top 25 team every year – she’ll quote that we have the best setter in all of the NAIA,” Muckenthaler said. “And it’s not her athletic ability, it’s not her energy level. She’s just consistent and consistently really good.

“She erases a lot of errors from the back row and puts the hitters in the best position possible. It’s been a fun three years and we’re really looking forward to this last one.”

Wallace helped C of O to a deep run at the NCCAA Tournament last fall. As the host school, the Lady Bobcats were guaranteed a spot in the field.

But they proved they belonged, reaching the championship game, and they were the only school to land a couple of punches on eventual national champion Biola University.

C of O was the only opponent to win a set against Biola at the NCCAA Tournament, and in fact was the only team to force Biola into calling a timeout during its stay in Point Lookout.

The team is again guaranteed to have a spot in the national tournament, which is Dec. 5-7 at Keeter Gymnasium. Now they know what it’s all about.

Wallace played in all 40 matches for the Lady Bobcats as a junior as the team went 33-7, finishing with 269 kills, 38 service aces, 359 digs and 1,383 assists. She earned NCCAA All-American first-team honors, was named to the NCCAA All-Tournament Team and was an NCAA Scholar-Athlete.

As a sophomore, she had 1,313 assists, 218 kills and 284 digs. That came after a freshman season when she had 107 kills, 362 digs and 874 assists. She was named an honorable mention NAIA All-American both of her first two seasons.

Spears and Grant joined Dobbs on the NCCAA All-American first team, with Spears on the All-Tournament team and being named the tournament’s Most Outstanding Player.

While Muckenthaler tries to fit all the new pieces, she at least knows she doesn’t have to worry about her senior setter.

In fact, she will go out of her way to not go near her. She knows coaching her hard is not necessary.

“I stay out of her way, 100 percent,” Muckenthaler joked.

One thing everyone on the team is looking forward to: A season that is void of the off-court drama last year held.

It was only a couple of weeks into last season when the school reacted to Nike’s hiring of Colin Kaepernick by denouncing the move – given Kaepernick’s protests that included him kneeling for the national anthem.

The school decided none of its athletic teams would wear Nike apparel. That led the volleyball team to ditch its Nike uniforms and play the rest of the season in plain gray T-shirts. It also saw the players become the targets of scorn and even threats on social media, when the story blew up on a national level and some ill-advised critics labeled the players racist.

Now they have sparkling new Adidas uniforms, turning the page.

“Last season was definitely different,” Wallace said. “Looking back, I think it was good because it helped us grow individually and helped us grow as a team from everything that was happening, especially off the court with the Nike stuff.

“We’re looking forward to more of a normal season this year, definitely.”

Until then, though, it’s all about smooth sailing, loving volleyball and getting to go to college for free in the process.

“This should be the least amount of stress in their lives,” Muckenthaler said. “Sports are an outlet.Yes, we want to win. I’m competitive and they are competitive. But if you’re not learning those little lessons along the way, you’re missing the whole point of sports. That’s why if we can just relax and use this as an outlet, we can learn those valuable lessons. … Hopefully this will prepare them for those battles that they will have.”

Muckenthaler is quick to admit she learned and grew as a coach last year. She tells the story of having a road match against Lyon College in Arkansas on a Tuesday night, and instead of practicing at home on Monday, she and the team went to a VIP event on campus featuring Amy Grant, popular singer and songwriter.

It felt foreign for a coach to forgo a practice on the night before a road trip, but it was a once-in-a-lifetime opportunity, and her team responded with its best match of the season

“It taught me a lot as a coach – that every day doesn’t have to be a tough day for them on the volleyball coach,” she said. “It’s OK to play floor hockey or ultimate Frisbee at practice, they’re getting their cardio in and having fun.

“That was a good lesson for me, for sure.”

It won’t be easy to replace the contributions of national award-winners Alex Spears and Kayli Grant on the C of O front line, but coach Stacy Muckenthaler has brought in a group of six new players to help shoulder the load.

One of them – defensive specialist Izzy Gibbany – is a sophomore from Harrison, Arkansas, who was on the Missouri State roster last season.

The others are freshmen – Kiley Counts from Winona; Leatha Keller from Summersville; Delanie Gaston from Springdale, Arkansas; Lynnae Grus from Saint Clair; and Abi Menzies from Clever.

“It’s been great having the older ones mesh with the younger ones, and showing them the ropes,” Muckenthaler said. “They’ve done a great job with that so far.”

Oct. 5: C of O Tri-Match, vs. Lincoln and MidAmerica Nazarene