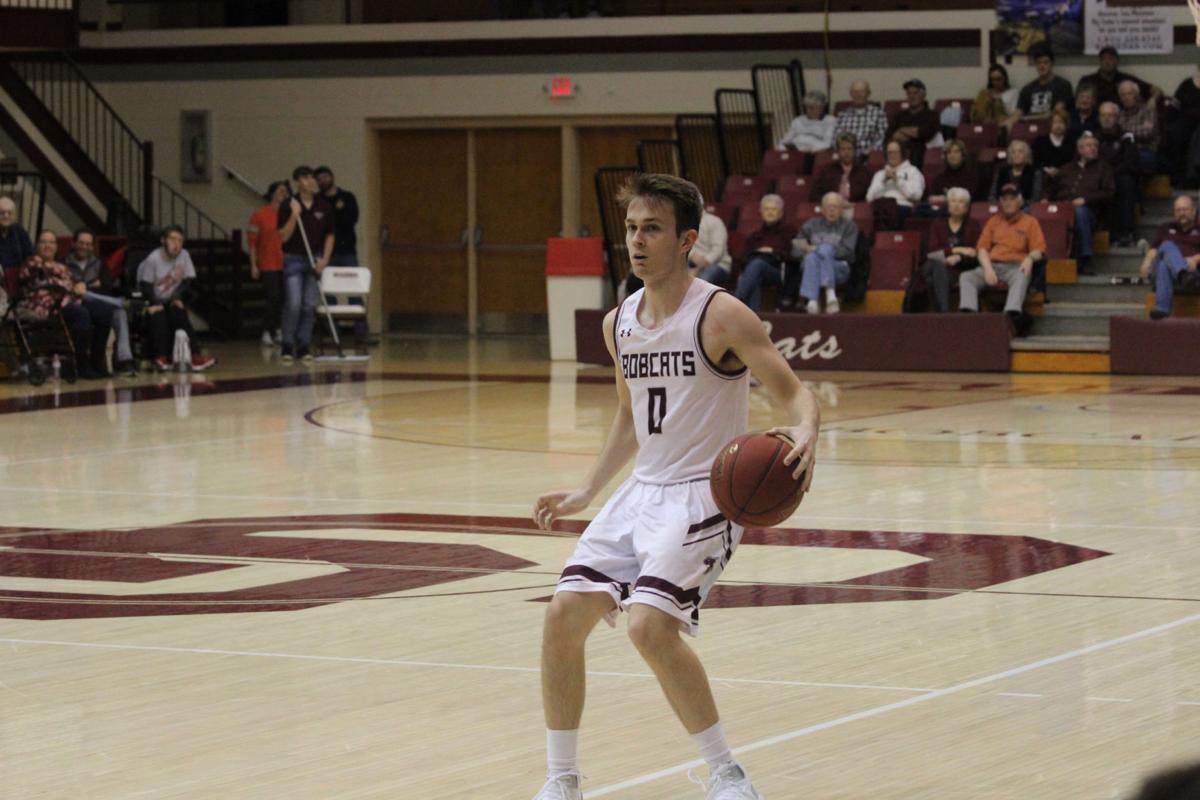 Sophomore Klay Barton dribbles the ball. Barton put up 10 points in Friday’s matchup, and scored a game-high 22 points on Saturday. After picking up the two wins over the weekend, the Bobcats improved to 11-8 for the season 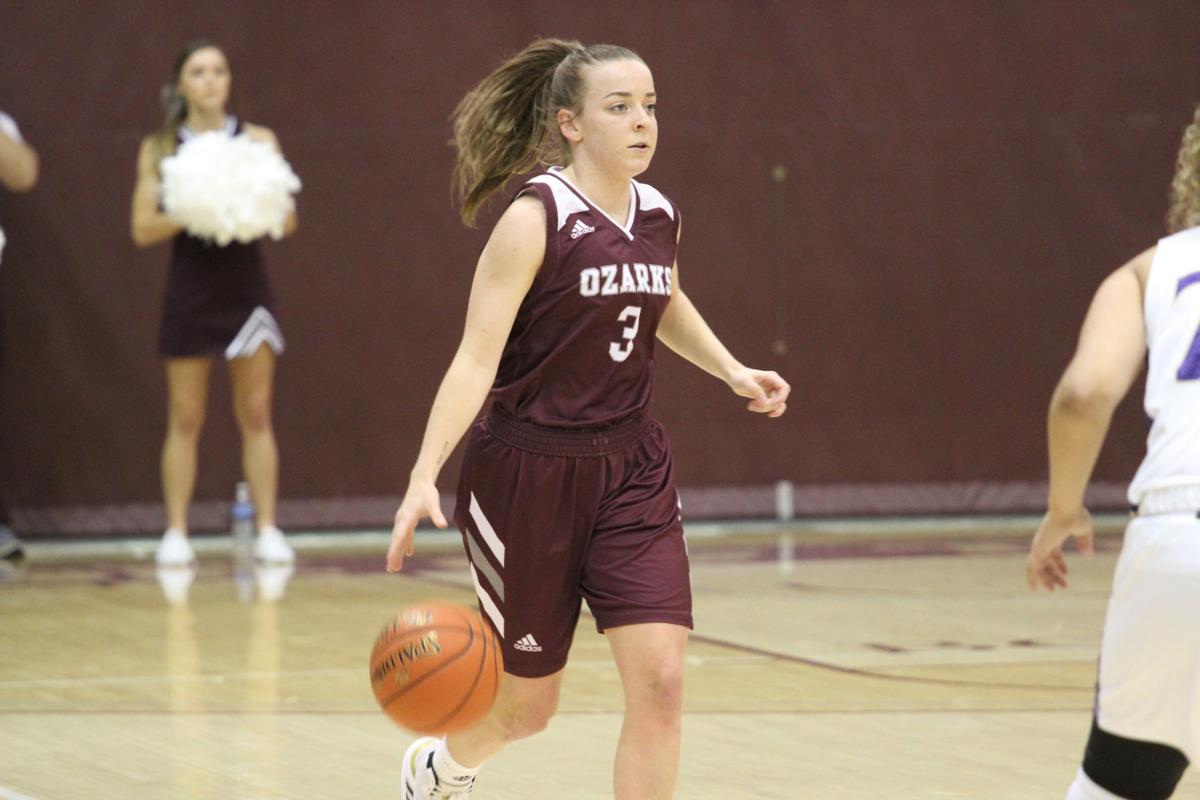 Junior Abby Oliver dribbles the ball. Oliver was five points away from the 1,000 point mark before Friday’s game, she put up 11 points in the game to surpass it. The Lady Cats went on to get a win both Friday and Saturday, improving to 16-3 for the season.

Sophomore Klay Barton dribbles the ball. Barton put up 10 points in Friday’s matchup, and scored a game-high 22 points on Saturday. After picking up the two wins over the weekend, the Bobcats improved to 11-8 for the season

Junior Abby Oliver dribbles the ball. Oliver was five points away from the 1,000 point mark before Friday’s game, she put up 11 points in the game to surpass it. The Lady Cats went on to get a win both Friday and Saturday, improving to 16-3 for the season.

College of the Ozarks men’s basketball used some clutch free throws late to stave-off a Lincoln Christian University (Ill.) comeback on day one of the MLK Classic. The Bobcats defeated the host school, 79-76, and improved their record to 10-8 on the season.

Early in the first half, C of O jumped out on top using an inside-out game anchored by Ayden Stone. Stone scored a team high 20 points in the game on 10 for 15 shooting. Stone also co-led the team in rebounds with seven.

The inside presence opened-up driving opportunities for perimeter players. Treydon Rackley took full advantage, slicing through the defense on his way to 16 points while grabbing 5 boards along the way.

In the second half, LCU caught fire from deep, connecting on 7 for 16 (43.8%) from downtown. The surge helped the Red Lions take the lead late, however, the Bobcats kept their cool.

Head Coach Steve Shepherd noted, “This was a great team win. I am proud of the way we kept our composure when they took the lead. We stepped it up defensively, got some big baskets and converted all our free throws late in the game.”

The Bobcats ended the game with a torrid shooting pace. C of O shot 13 for 22 (59.1%) including 3 for 5 (60%) from distance in the second half. However, as mentioned it was the 11 for 12 from the charity stripe that made the difference late.

Trent McBride and Trey Gibson were both perfect from the free throw line, helping them chip-in eight and four points respectively. Klay Barton had another solid game scoring 10 points, snatching five boards, and hitting three of his four free throws.

Senior Brandt Cochran nailed all four of his free throws late to ice the game. In all, Cochran shot 5 for 12 from the field for a total of 15 points. Cochran also added a team high four assists.

College of the Ozarks men’s basketball defeated Holy Family College on Saturday, 93-63. With the win, the Bobcats improved to 11-8 on the season.

Freshman Andrew Mitchell got going early from distance, eventually nailing 6 for 8 from three-point range for a total of 18 points. Treydon Rackley knocked down a trio of three-pointers on his way to 19 points to go along with four assists and four rebounds.

To open the second half, the Bobcats’ leading scorer sophomore Klay Barton drove hard to the hoop for a nifty finish. Barton led the game with a game-high 22 points on 8 for 14 shooting including 2 for 3 from distance. Barton also contributed five rebounds and three assists.

Freshman Ayden Stone once again played solid in the post. Stone notched a double-double with 14 points and a game-high 12 rebounds. Stone benefited from multiple dimes from senior Brandt Cochran. Cochran led all with seven assists to go along with eight points and five rebounds.

College of the Ozarks men’s and women’s basketball traveled to Lincoln Christian University (Ill.) this weekend to compete in the MLK Classic. For the opening round on Friday, both the men and women picked up wins against the host school, Lincoln Christian. The Lady Cats improved their record to 15-3 with a huge 108-33 win.

Head Coach Becky Mullis praised Oliver commenting, “I am very proud of Abby for reaching the 1000-point milestone for her career. She joins a distinguished group of 1000 point scorers in our tradition rich program. She has worked hard to become the player she is and I’m happy for her to achieve such an accomplishment.”

The second half was more of the same. C of O continued to torch the nets from all over, including nine three-point makes in the second half alone. The Lady Cats moved the ball with laser-like precision, resulting in extremely efficient play by everyone involved. In fact, every player scored multiple baskets.

“I am proud of the focus and execution we displayed this evening. It was also an opportunity for every player to play a significant number of minutes. We had great teamwork, with 24 assists and seven players in double-figures,” Coach Mullis concluded.

Dominant on Day 2 of

The College of the Ozarks Lady Bobcats picked up their second win in as many days at the MLK Classic hosted by Lincoln Christian University (Ill.). On Saturday, C of O defeated Holy Family College (Wis.) by a score of 88-32.

Much like the first day, C of O began the game on fire and never let up. The Lady Cats opened the first half shooting a blistering 20 for 34 (58.8%) from the field while holding the Lakers of Holy Family College to just 6 for 19 (31.6%) with overpowering defense. The Lady Cats caused 16 first half Laker turnovers.

“We had another balanced attack with all players seeing a lot of action. We executed well on both the offensive and defensive ends. I’m proud of us for coming out focused and taking care of business,” Head Coach Becky Mullis said.

To Mullis’ point, all eleven Lady Bobcats played seven or minutes in the first half. Every Lady Cat but one scored, with Ashely Forrest being the only exception. Forrest was too busy distributing to score in the first half, leading all with five assists. Going into halftime, C of O led Holy Family, 45-13.

C of O slightly cooled off from the field in the second half, shooting a smoldering 18 for 37 (48.6%). However, the team did a number on the Lakers on the boards, winning the rebounding battle 43-24 for the game. The Lady Bobcats continued to apply consistent pressure in their half court defense, forcing 27 Lady Laker turnovers while holding Holy Family to just 13 for 46 (28.3%) from field goal range for the game.