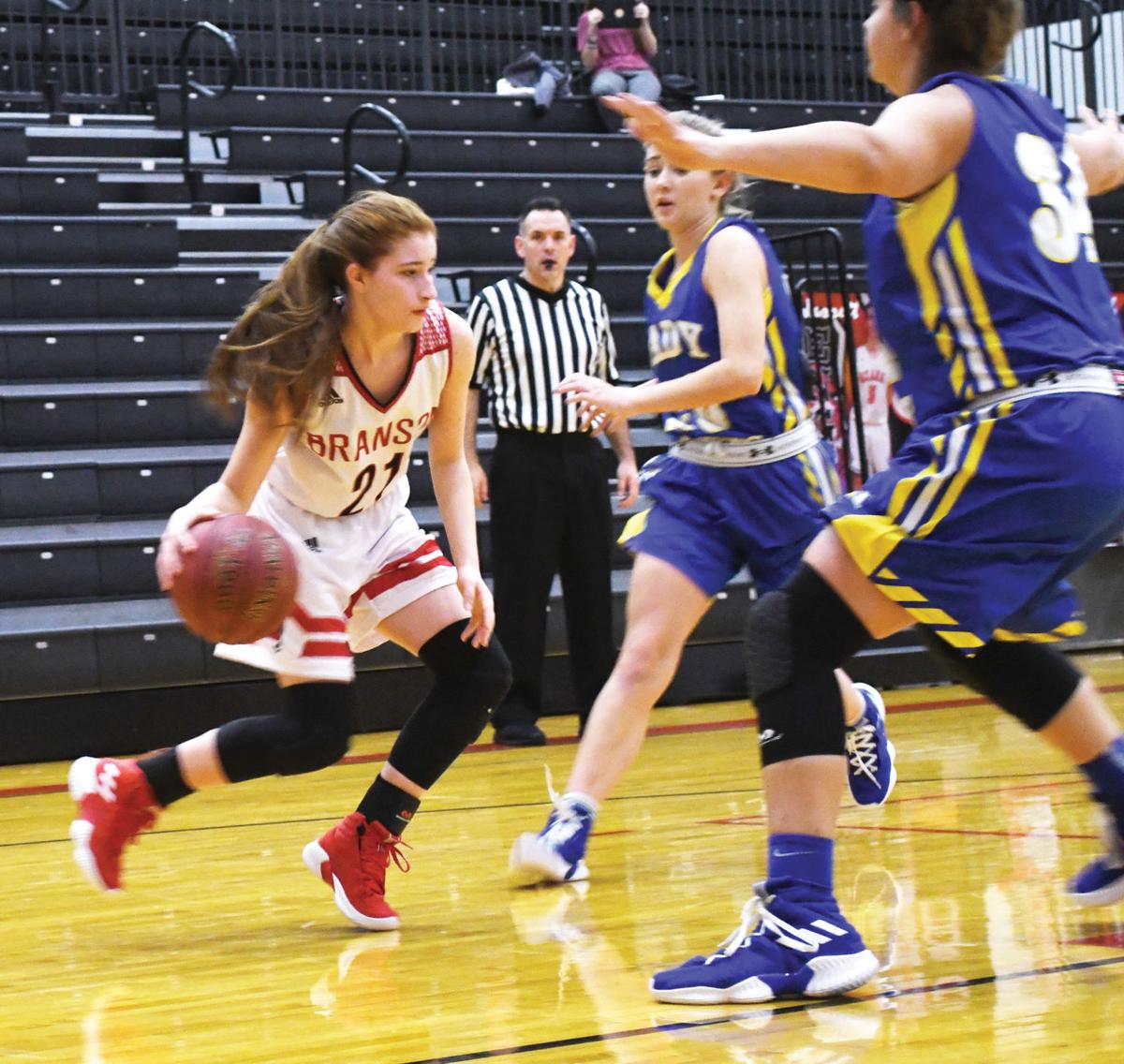 Branson freshman Riley Crouse (left) dribbles against an Alton double-team on Saturday in Ozark. Crouse finished with 13 points and was key in the Lady Pirates’ full-court press. 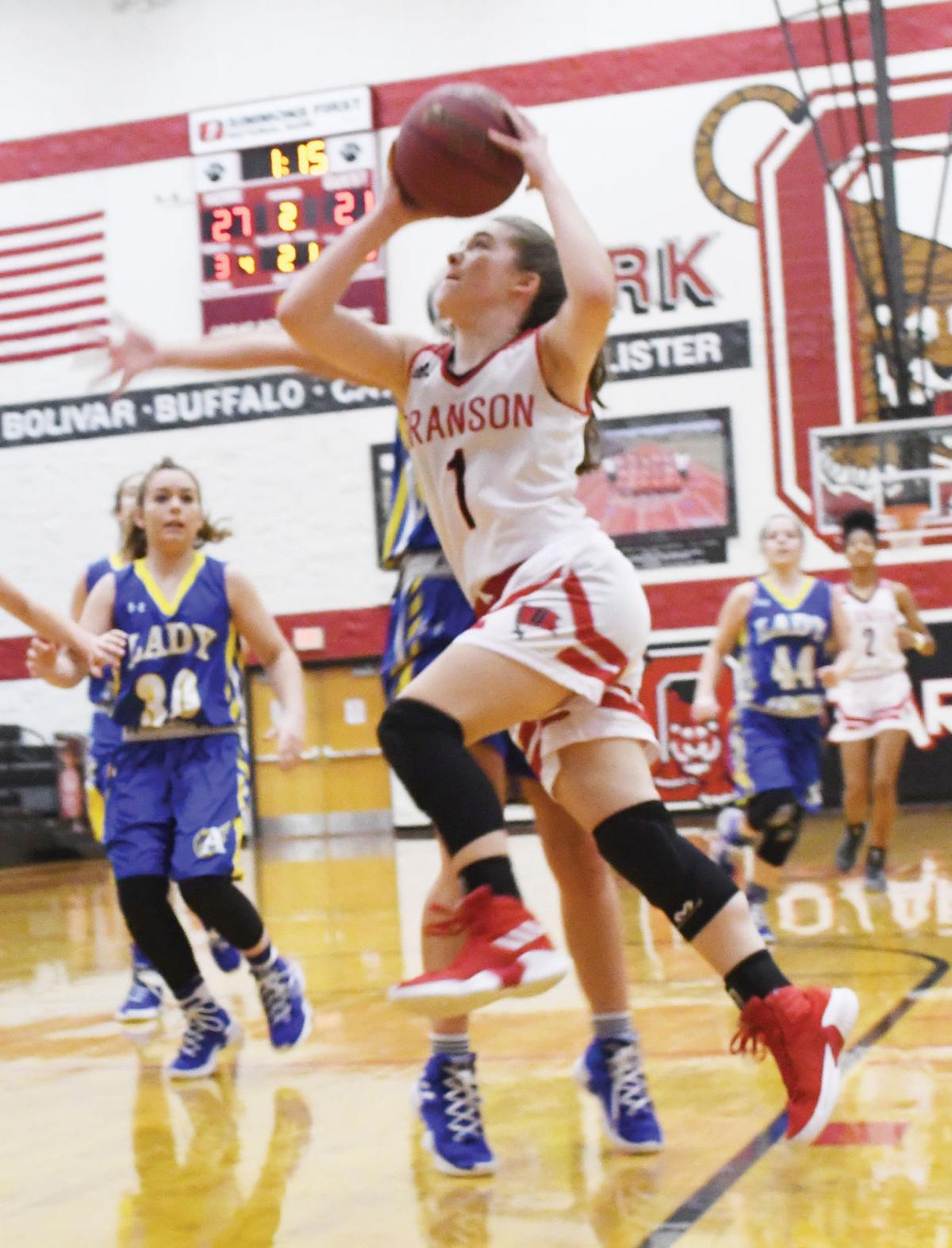 Branson freshman Chloe Grimm goes to the basket during a fast break in the first half Saturday, in the Lady Pirates’ victory over Alton.

Branson freshman Riley Crouse (left) dribbles against an Alton double-team on Saturday in Ozark. Crouse finished with 13 points and was key in the Lady Pirates’ full-court press.

Branson freshman Chloe Grimm goes to the basket during a fast break in the first half Saturday, in the Lady Pirates’ victory over Alton.

OZARK – It has been an early season full of ups and downs for the Branson High School girls’ basketball team.

The Lady Pirates split their first six games, including a 2-0 start and a rout of Bishop DuBourg in the Border Battle.

At the other end of the spectrum was a 22-point loss to Lebanon last Thursday night.

That’s what made Saturday morning’s performance – a 62-36 victory over Alton in the Scoreboard Guy Shootout at Ozark High School – all the more rewarding for veteran coach Kip Bough’s team.

As players filed out of the locker room to take the rest of the weekend off, smiles and excited chatter were plentiful.

“That’s the thing, there’s a lot of smiles with them, period,” Bough said. “They have a great work ethic, a great attitude, and they’re progressing, not only with their skills, but with their game knowledge.”

The biggest positive about the victory – in addition to the much-needed game experience for the young Lady Pirates team – was the balance that was crucial to the victory.

High-scoring and highly touted junior Priscilla Williams led the way, finishing with 27 points and scoring on a variety of 3-pointers, long-range jumpers and drives to the basket.

But huge contributions also were made by senior Karis Goodwin, who had 13 points, and freshman Riley Crouse, who made some big plays on the full-court press and added 13 points of her own.

“It’s nice to get a win,” Bough said. “The balance was very, very big. We were able to get kids in there. We’re just so inexperienced, the more games we can play with this group, the more experience we’re going to gather.

“Kids like Riley and Chloe (Grimm), who are freshmen, having some success is huge. I’m very pleased because of that balance, and very pleased with the win.”

Crouse and Goodwin helped spark Branson late in the first quarter, giving the Lady Pirates the lead for good.

Goodwin scored on a baseline drive, then Crouse made a steal and dished to Williams for an easy layup. When Williams drained a long 3-pointer at the buzzer, Branson led 15-12.

Goodwin opened the second quarter by banking in a 3-pointer, when Crouse hit a trey and made a steal on the press and converted with a layup.

Williams made a 3-pointer, then converted a conventional three-point play off a dish from Goodwin, and Goodwin ended the half with a 3-pointer to make it a 36-23 game.

Alton never seriously threatened in the second half. Highlights in the third quarter included another Crouse steal and layup, a Williams score on a drive across the lane and a Goodwin 3-pointer.

Williams tacked on 10 fourth-quarter points, including a putback of an offensive rebound and a 3-pointer, before she took an early seat.

Bough was able to clear his bench and get every player on the roster some varsity playing time, which is another positive he took from the victory.

“With this group, you’re just looking to get wins and positives and progressing every game,” Bough said. “And you’re going to have your games where you have duds, that’s just part of being young.

“We understand that, and it’s always nice to have the younger kids experience some success like that, to leave the locker room really feeling good.”

The Lady Pirates were scheduled to play at Springfield Glendale on Monday night before opening the Pink and White Lady Classic on Dec. 26.

Branson will play eighth-seeded Springfield Parkview at 4:30 p.m. at Drury University’s Weiser Gym, then take on either Strafford or Lebanon on Dec. 27.