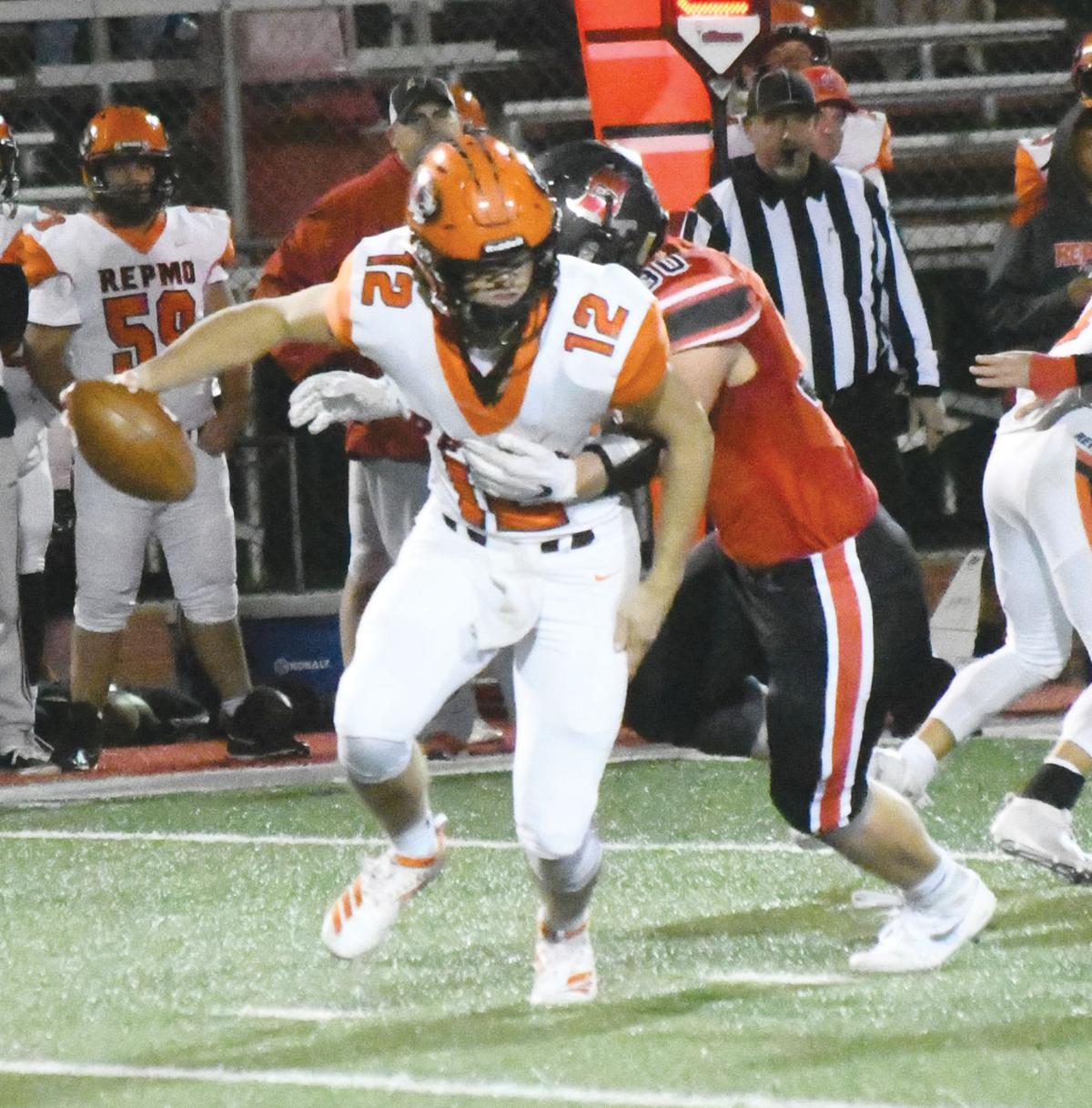 Republic’s Lucas Hayes (12) is sacked by Stephen Derks (30) during Branson’s overtime win against the Republic Tigers Friday night in Branson. 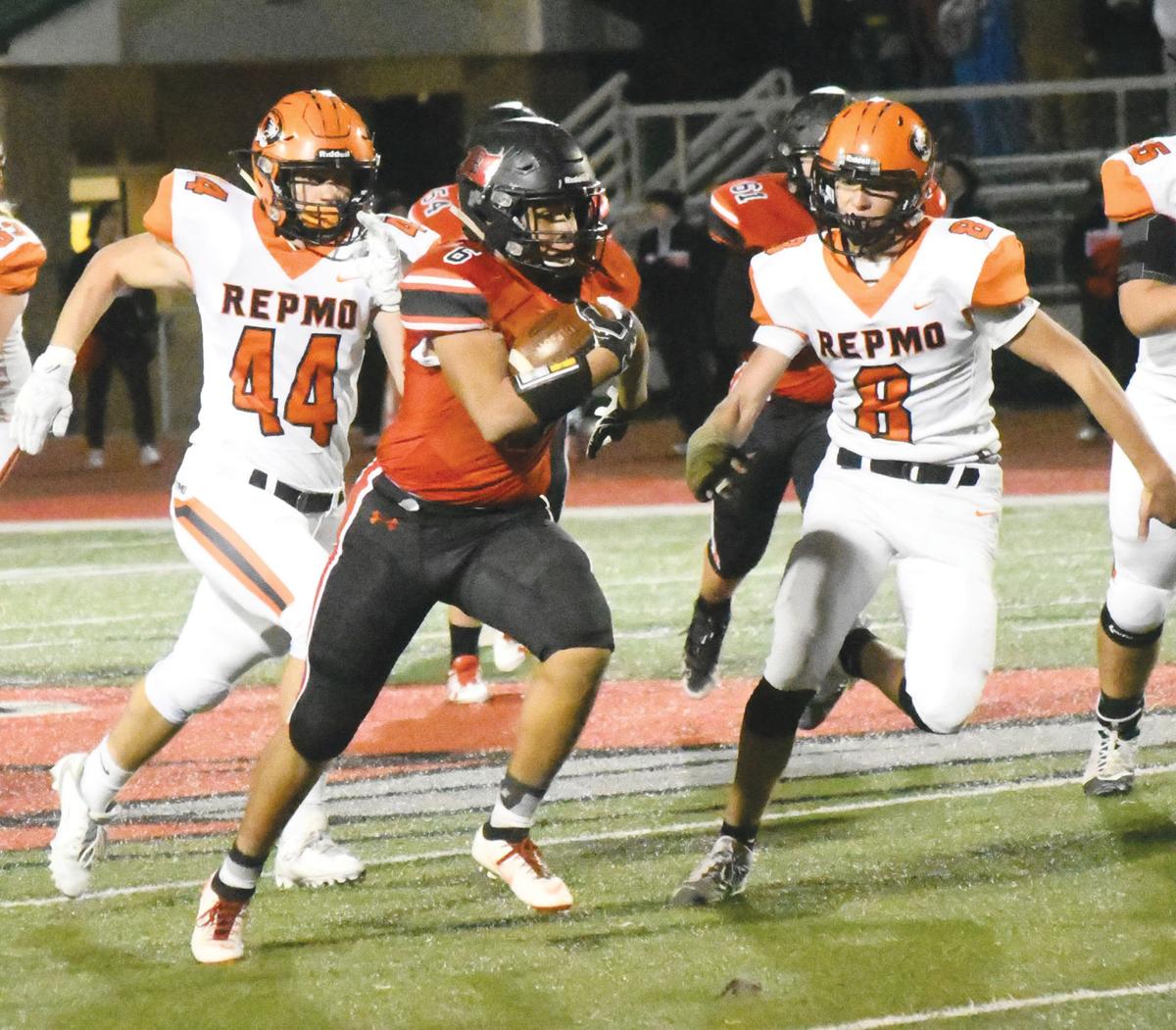 Branson’s Cristian Berumen (6) gets loose on a 48-yard run during the opening quarter of Friday night’s game against Republic at Pirate Stadium. 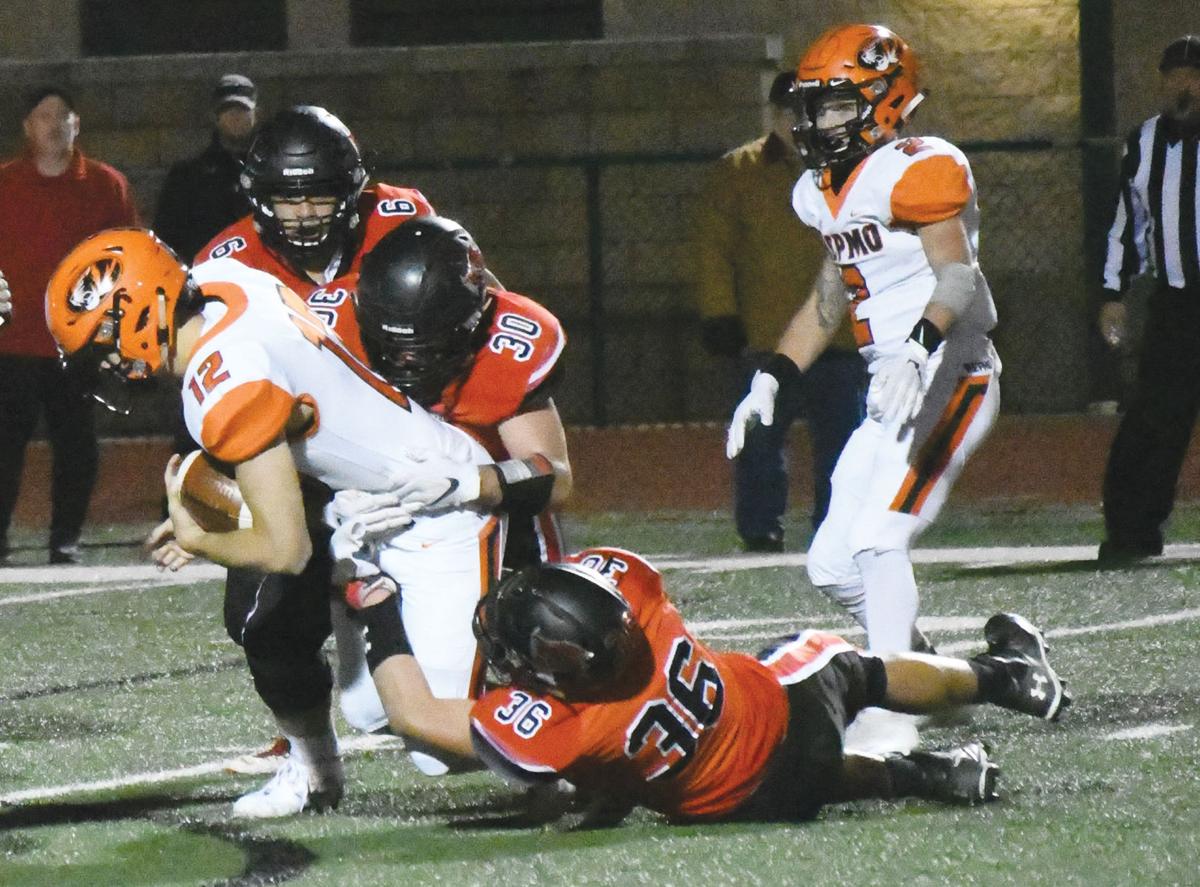 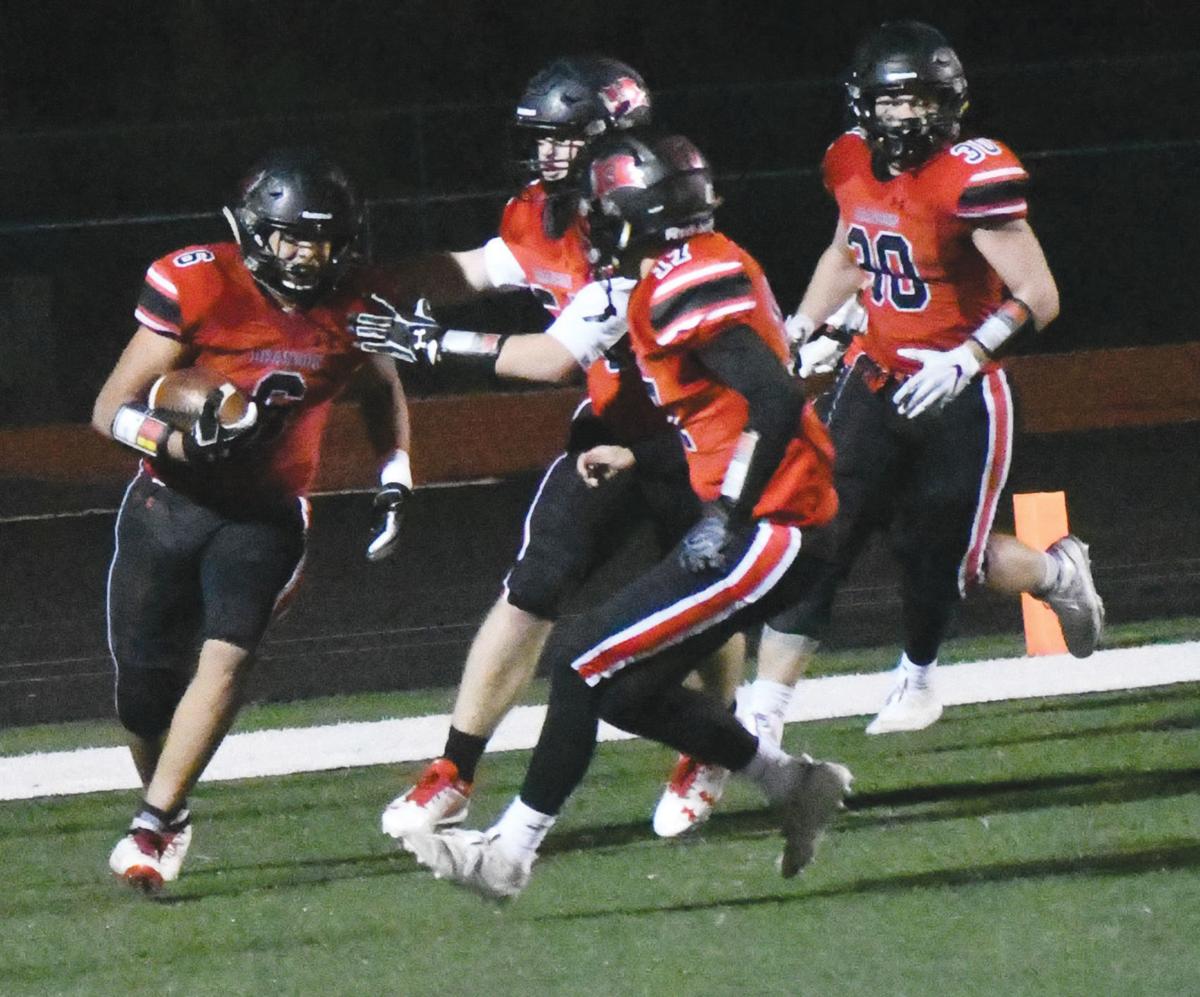 Branson’s Cristian Beruman (6) is joined by teammates in celebrating the game-winning touchdown against Republic in Friday night’s District opener. 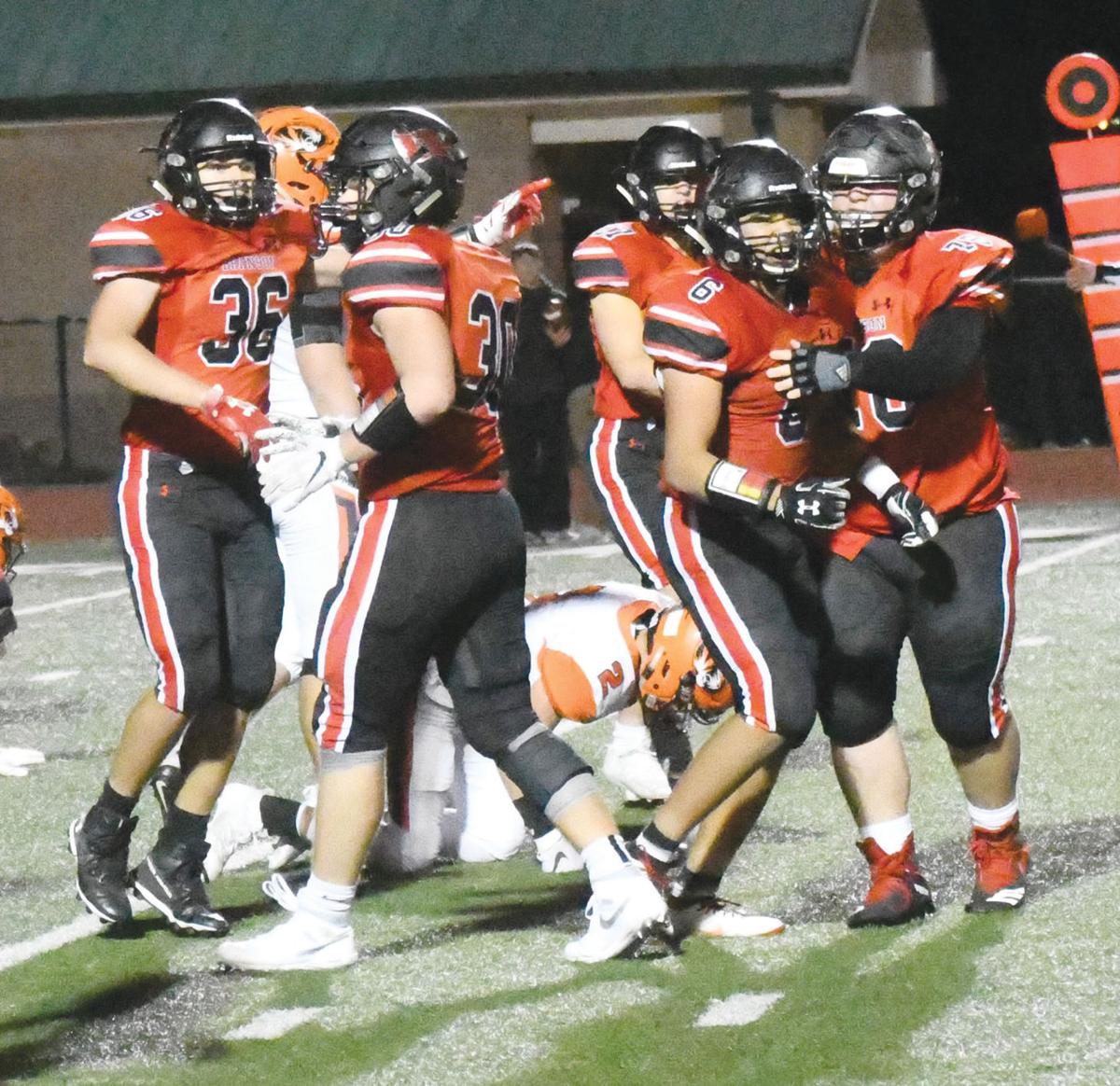 The Branson Pirate defense celebrates after making a fourth-down stop during Friday’s overtime win against Republic in the opening round of Districts.

Republic’s Lucas Hayes (12) is sacked by Stephen Derks (30) during Branson’s overtime win against the Republic Tigers Friday night in Branson.

Branson’s Cristian Berumen (6) gets loose on a 48-yard run during the opening quarter of Friday night’s game against Republic at Pirate Stadium.

Branson’s Cristian Beruman (6) is joined by teammates in celebrating the game-winning touchdown against Republic in Friday night’s District opener.

The Branson Pirate defense celebrates after making a fourth-down stop during Friday’s overtime win against Republic in the opening round of Districts.

Cristian Berumen made a stand on Friday night.

He wasn’t ready to turn in his football gear and see his junior season come to an end.

So he did something about it. In a big way.

The physical, athletic linebacker made monster plays on both sides of the ball in overtime during an opening-round game in the Class 5 District 6 Tournament, leading Branson High School to a 33-27 victory over Republic at Pirate Stadium.

First came a pair of drive-snuffing stops on Republic’s possession in overtime.

On third-and-1 from the Branson 16-yard line, Berumen penetrated up the middle and stopped Riley Sigman for a 1-yard loss.

On the next play, a fourth-and-2 from the 17, Berumen did it again, hauling down Sigman after a 1-yard gain, keeping the game tied and giving Branson the ball on the 25-yard line for its overtime possession.

Tristian Pierce hit Brady Blackwell for a 12-yard gain on a third-and-10 play to keep the Pirates’ drive alive, and two plays later, Berumen rumbled in from 11 yards out for the game-winning touchdown, setting off a wild celebration with the players and students in attendance.

“I didn’t want this season to end,” Berumen said. “I told the team that we needed to come ready to play.

Berumen was all over the field all night, finishing with 176 rushing yards on only 13 carries, averaging more than 13 yards per run, ripping off gains of 32, 48, 18 and 28 yards and scoring on touchdowns of 18 and 11 yards. He added three extra-point conversions.

His biggest plays came when his team needed it the most, in overtime.

“I knew I had to do this for my team,” he said. “I just made two big stops on defense, and I knew we had to go win this.”

The loss ended an eight-game losing streak and gave Branson the same start to the postseason that the Pirates enjoyed to the regular season – a home victory over Republic.

The Pirates claimed a 42-29 victory over Republic in Week 1, then saw the rest of the season spiral downward in a flurry of injuries, near-misses and close losses.

“We needed this, we needed something positive to happen,” Branson coach Anthony Hays said. “With all that we’ve been through, the thing I’m most happy about is the fight that we had after eight grueling weeks of all kinds of adversity and injuries, close losses and bad breaks – you name it.

“For us to come out and battle and get an overtime win shows the heart of these kids.”

It also answered a question Hays has been asking the football gods since the losing streak started: When will his team start seeing breaks fall in its favor?

“I’ve been thinking that for two months, and finally a couple of little things happened,” Hays said.

Branson got a lift from the return of defensive lineman Ethan Stout, who suffered a broken hand in a Week 5 loss to Joplin and had been sidelined since.

Also back was running back Jay Hill, who has battled a high ankle sprain since Week 3 and has been in and out of the lineup. Hill finished with 96 yards on 18 carries, scoring on a 5-yard run in the second quarter.

Hill exited the game late in the third quarter after appearing to aggravate the injury, but he was in the lineup long enough to contribute to a ground game that finished with 330 rushing yards.

Stephen Derks added 53 rushing yards on 11 tries, including a 3-yard TD run to open the scoring.

Pierce, in action at quarterback because starter Dalton Muenchau is out for the season with a broken finger on his passing hand, completed 8-of-12 passes for 83 yards and a 13-yard TD pass to Brady Blackwell early in the second quarter.

Republic rallied in the second half, scoring on its first possession, then adding a touchdown midway through the fourth quarter and the game-tying score with 1:21 left.

The key was Republic’s inability to score on conversions following the Tigers’ second-half scores. One two-point try ended with an incomplete pass, and the Tigers missed PAT kicks on their final two touchdowns.

With the stakes of team’s postseason fate on the line, Hays opted for a change in philosophy.

Instead of playing most of his key players on either offense or defense, Hays threw that strategy out the window and let players see action on both sides of the ball.

It proved to be a wise move, given the contributions Berumen made on both offense and defense.

“We came in with the game plan that this is the last game, some of these kids we’ve played on one side of the ball, and Berumen has showed some flashes,” Hays said. “We were like, ‘It’s win or go home time, and we’re going to play everybody and let’s see what happens.’

Next up is another rematch, with a Friday game at district top seed Carthage.

The teams met in Week 6 in Branson, with the Tigers emerging with a close-than-expected 16-7 victory.

“We played them well the first time, and it just slipped out of our fingers,” Hays said. ‘So we’ll celebrate this tonight and then watch film later on and prepare for next week.

We’ll throw everything at them.”