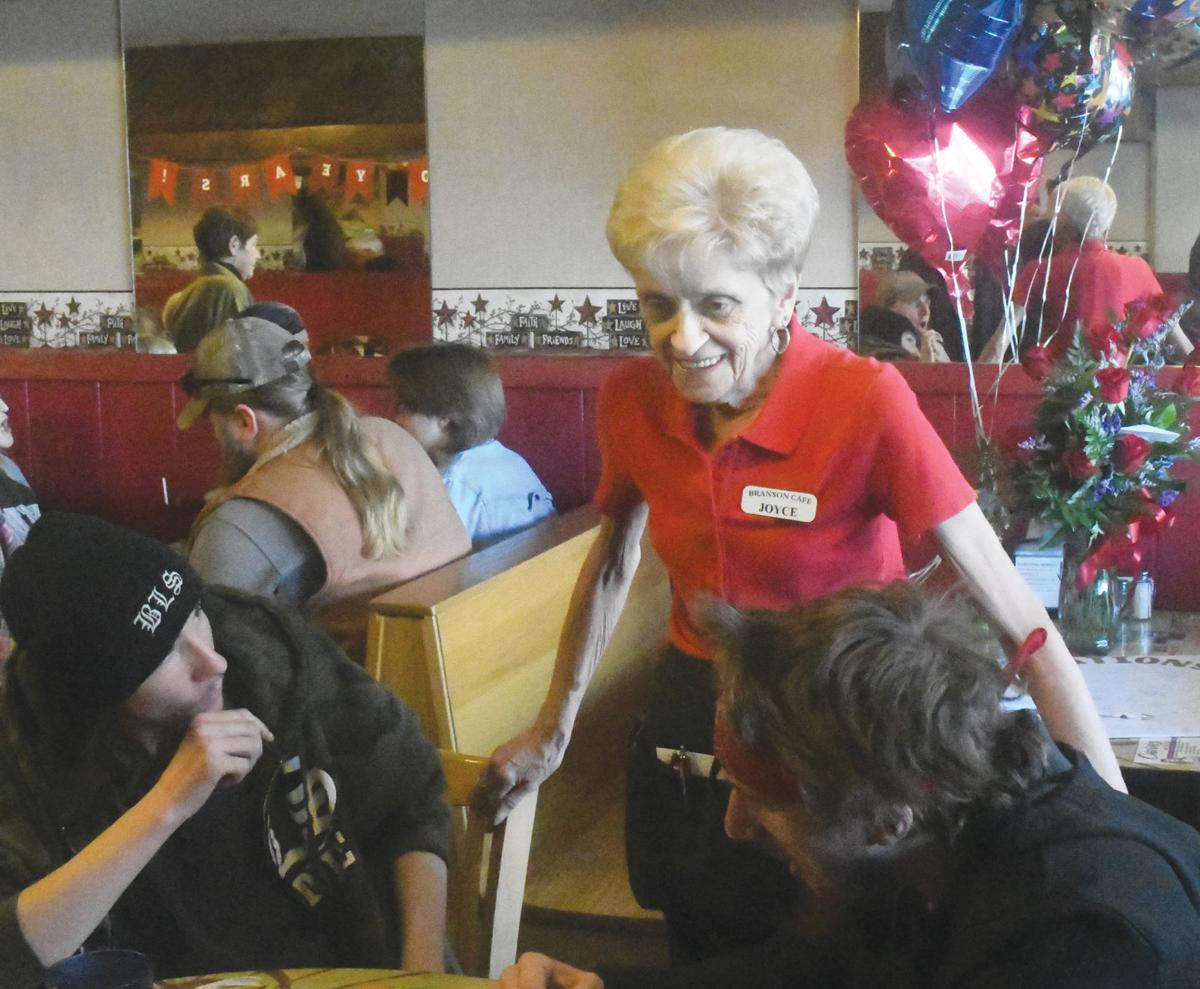 Joyce Davis, who has been working at the Branson Cafe for 60 years, is all smiles as she visits with customers last week in downtown. 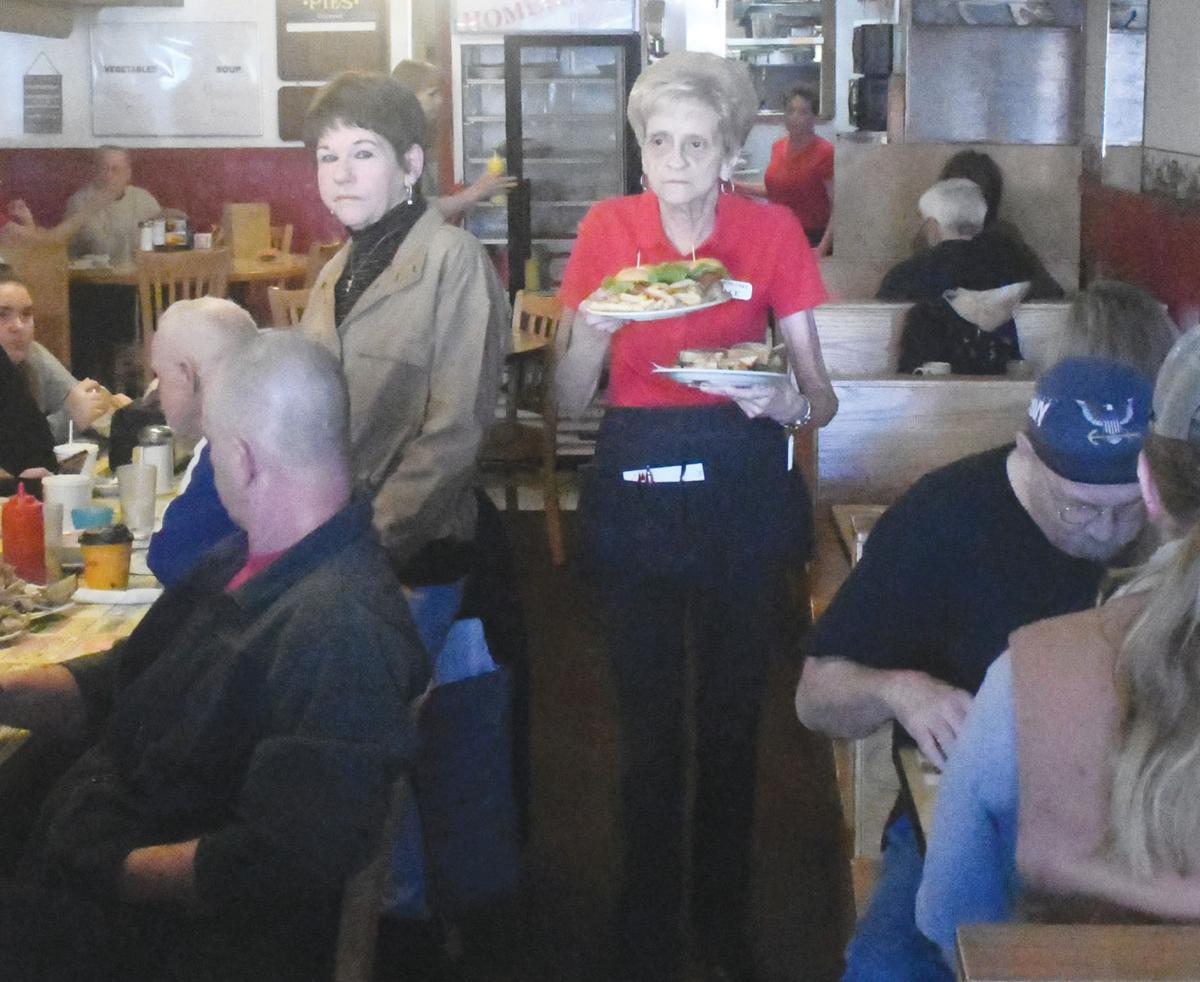 Joyce Davis continues to work hard even though she celebrated 60 years working at the Branson Cafe in downtown.

Joyce Davis, who has been working at the Branson Cafe for 60 years, is all smiles as she visits with customers last week in downtown.

Joyce Davis continues to work hard even though she celebrated 60 years working at the Branson Cafe in downtown.

There aren’t too many things in Branson that began before the Shepherd of the Hills and Silver Dollar City that are still going as strong as 74-year-old Joyce Davis, who celebrated the beginning of her 61st year waiting tables at the Branson Cafe in downtown Saturday.

According to Davis, she started working at the Branson Cafe, which had already been open for 50 years, when she was 14.

“I started just part time, you know, after school,” Davis said. “I liked doing it, so I just stayed with it. I don’t like changes (laughs).

“I love to work with the people I work with, and I have great bosses in Susie and Tom Roten.”

Another of her favorite aspects of working at the restaurant, aside from the folks she works with, is seeing many of the same visitors year after year.”

“I’ve seen kids grow up and come in with their kids, and then their grandkids,” she said. “It’s awesome because I have an extended family right here.”

According to Branson Cafe co-owner Susie Roten, having an employee who has been a part of a Branson institution like the Branson Cafe adds a whole other element to the experience.

“To have that sort of longevity at a place, especially in the food industry, is amazing. She’s pretty much one in a million,” Roten said. “Plus, it’s so great to have someone who is here year after year, that thread that keeps the history of this place going.

“Someone the people can come see year after year, that is truly a part of their vacation.”

As far as the type of employee Davis has been, Roten said you don’t make it 60 years in one place without being fantastic.

“She is such a trooper,” Roten said. “She’s here when she’s supposed to be, she hates to call in sick, and no matter what else is going on with her, any time I ask if she’s OK, she smiles and says ‘I’m fine.’

In addition to locals and visitors, Davis has also seen lots of Branson history over the past six decades. When asked about some of the more “famous” folks who have visited the Branson Cafe, she gave a grin.

“Oh there have been a lot, but my gosh, I can’t remember who,” she laughed. “That’s terrible I know, but we’ve had so many people come in over the years.”

In addition to local favorites like Jim Stafford and Mickey Gilley, one of Davis’ most recent run-ins with a “famous” person came in 2018 when Andrew Zimmern was in town to film “The Zimmern List.”

During the show, Zimmern seemed to enjoy the authenticity of the place, and really liked the fact Davis had been working at the Branson Cafe for 58 years, at that time.

“He was a great person,” she said. “I was kind of nervous at first, but he was so nice and really put me at ease.”

Roten said they realized Davis’ momentous occasion over the winter break, and knew they needed to do something to celebrate. In addition to inviting friends and family, as well as providing her favorite cakes, Angel Food and carrot cake, Branson Mayor Edd Akers stopped by to present Davis with the Key of Service.

“I was so surprised they would make such a big deal out of this,” Davis said. “Nobody has ever done anything like this for me before.”

As Davis prepared to finish her shift Saturday, she was asked about the possibility of retirement. She answered with a quick “no,” and said it never even enters her mind.

“My doctor asked me when I was going to retire, and I told him ‘no,’ too,” she said. “I said ‘Don’t even say a word to me about it.’ I work four days a week, and that’s what keeps me going.”