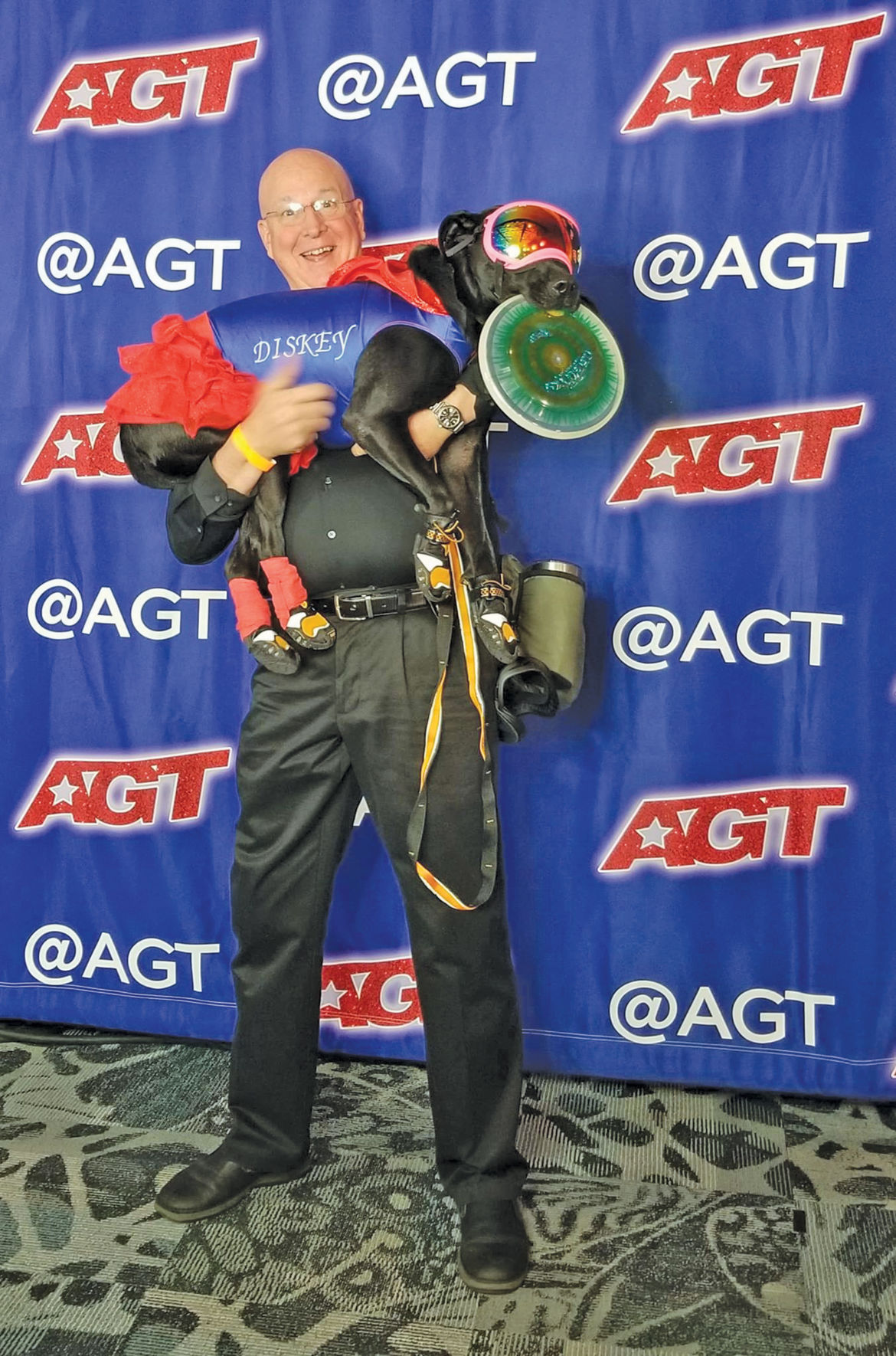 Russell Rosencrans and Diskey the Wonder Dog at the Dec. 14 America’s Got Talent Auditions in Dallas, Texas. 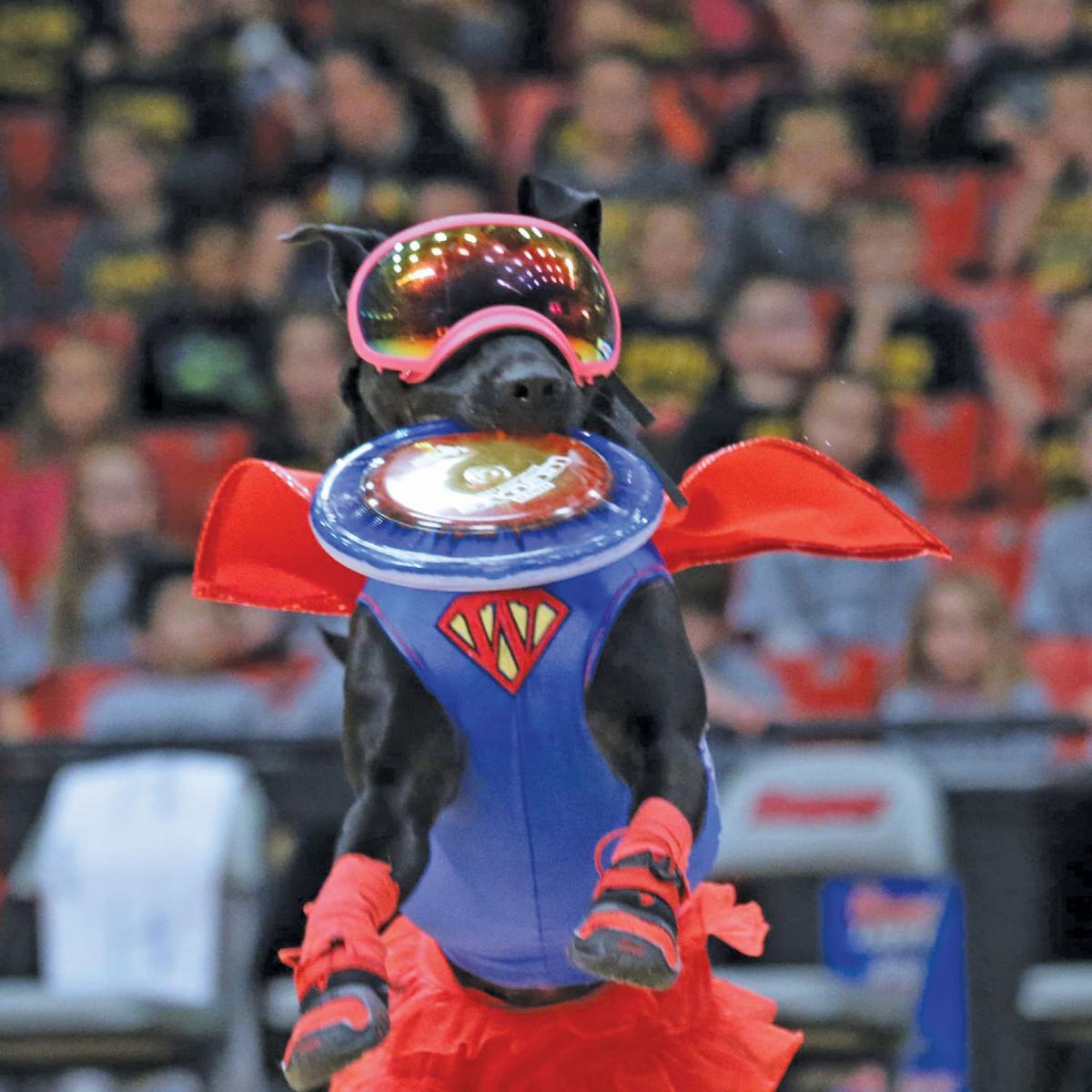 Diskey the Wonder Dog flies through the air to catch a dog disc thrown by owner Russell Rosencrans during a performance earlier this year.

Russell Rosencrans and Diskey the Wonder Dog at the Dec. 14 America’s Got Talent Auditions in Dallas, Texas.

Diskey the Wonder Dog flies through the air to catch a dog disc thrown by owner Russell Rosencrans during a performance earlier this year.

From Branson to Dallas and possibly Branson to Hollywood, ‘Branson’s Dynamic Disc  Dog Duo’ has successfully completed their audition for America’s Got Talent.

If you’ve attended any community events, visited family at a nursing home or even been in attendance during a Drury basketball game halftime show in the last few years, chances are you’ve had the opportunity to witness the talents of Russell Rosencrans and Diskey the Wonder Dog.

What originally started out as an idea to help him improve his disc golf game has led Rosencrans and Diskey on a journey that most recently took them to Dallas on Dec. 14 where they had the chance to showcase Diskey’s talents with a flying disc during an audition for America’s Got Talent.

Rosencrans said the morning of their audition they arrived at the Kay Bailey Hutchison Convention Center in Dallas around 6 a.m. where they were joined by around 200 other acts in the line-up.

“We went into the holding room. This is what you would have seen that everybody sees on TV,” said Rosencrans. “It’s just a big giant room, and they’ve got it decorated up with a lot of back drops.”

Rosencrans added that, as they began to move about the holding room, they started to see some of the other acts that they were going to be up against.

“From a woman wearing a fuchsia pantsuit, and bleached blonde with a heavy tan, to a group of disco roller skaters that were there and making Diskey just a nervous wreck because they were bouncing around on their skates,” Rosencrans said. “She maintained really well. She was extremely focused and just ready to have a good audition.”

Out of the initial 200 people at the convention center, Rosencrans said they were given No. 27. But due to a ill-timed doggie break, Rosencrans said he thought they had lost their opportunity to audition.

“We took a break and were outside when they called our number the first time, so we were afraid we missed it. Things all happen for a reason,” said Rosencrans. “When they did call the next set which was 40 through 90 – so they called one through 40 and we missed it – they said just go with this group.”

As they were walking to the audition rooms, Rosencrans said they were then called out and separated from the group.

A person comes out from the room and said, ‘Hey, the guy and the dog. Come here.’ So at that point we went from ‘Russ and Diskey the Wonder Dog’ to ‘A Guy and a Dog.’ Hollywood is now in effect,” Rosencrans said with a laugh.

Rosencrans said they were then brought into a great big room that, with the exception of the producer and a camera man, was completely empty, which was a perfect place for them to do their act.

“There were no distractions. No outside noise. No outside influence. Nothing. I had the entire room,” Rosencrans said. “So I asked the producer, ‘Can I (motioning to the entire room)? He said, ‘Use whatever you want.’  So we did. We used this room that was 100 by 200. We threw discs from one end of that place to the other.”

When they finished their routine, Rosencrans said, their time to impress those in the room was extended when the producer began to ask some questions about Diskey.

“So at this point, he’s asking me questions about Diskey and her glasses because she wears goggles and she does that for a reason. He asked me for that reason,” said Rosencrans. “That’s when I told him that she wears glasses for his protection. He looked at me with a puzzled look and said, ‘What do I need protection from?’ I said, ‘Well if you look into her eyes, your heart will melt, and we don’t want any of that happening. Melting hearts just wouldn’t be any good.’ He had a good laugh about it.”

After the producer had asked a few more questions about the duo and their history, Rosencrans said they were asked to go outside and wait in the hallway.

“He was very interested, which gave us more encouragement regarding our audition,” said Rosencrans. “So we waited out in the hallway and they took the other 39 acts, they took all of these people into the room. So they had them all audition in front of each other, which is a whole lot more pressure on you when they do that.”

Rosencrans said a different producer then took them from the hallway and informed him that they would be doing some additional recording. After some time in a new holding room full of hundreds of other acts, they were then taken to meet two other producers who then worked with them to record about eight different openings.

“It was me talking to Diskey as we come in off the escalator and we’re walking probably 100 yards towards them,” said Rosencrans. “So we’re in an open room, three stories tall with glass everywhere as we approach this camera, and we’re talking to each other. She had everything on her – her glasses and her whole outfit. I said, ‘Look Diskey, we made it. Our dreams come true. We’re on America’s Got Talent. Now we can change lives one smile at a time. Let’s do it.’ I threw the disc and she had a small jump and then we’d run out of frame.”

After filming multiple shots of the two playing and walking around together, Rosencrans said that, when it was over, all the producers said was ‘thank you.’

“I’m like, ‘So does this mean we’ve made it?’  Then they would just cast the largest grin and not say a word,” he said. “So you take from it what you will. Time will tell. I know they still got a lot of auditions to do.”

When asked about how the audition process went, Rosencrans said he felt the audition was incredible, and he felt really good about it.

“Diskey had some moves that were unprecedented in her career. She did some high jump back flip over the shoulder catches that I’ve never seen one that remarkable,” said Rosencrans. “To the point I even looked at the producer with such excitement and anticipation and just ‘Did you see that?’”

According to the America’s Got Talent website, auditions are continuing in four more cities up to Feb. 1. Rosencrans said the producers said he would not know anything one way or the other until sometime in February, but he encourages Diskey’s fans to pay close attention to her Diskey the Wonder Dog Facebook page for any updates.

Rosencrans also thanked the community for their support. Anyone interested in sponsoring or booking Diskey for a community event or show can visit Diskey’s Facebook page.