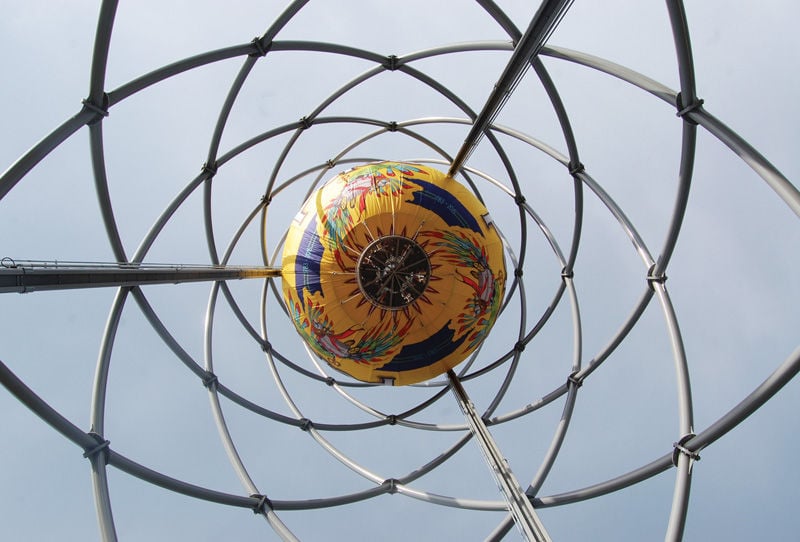 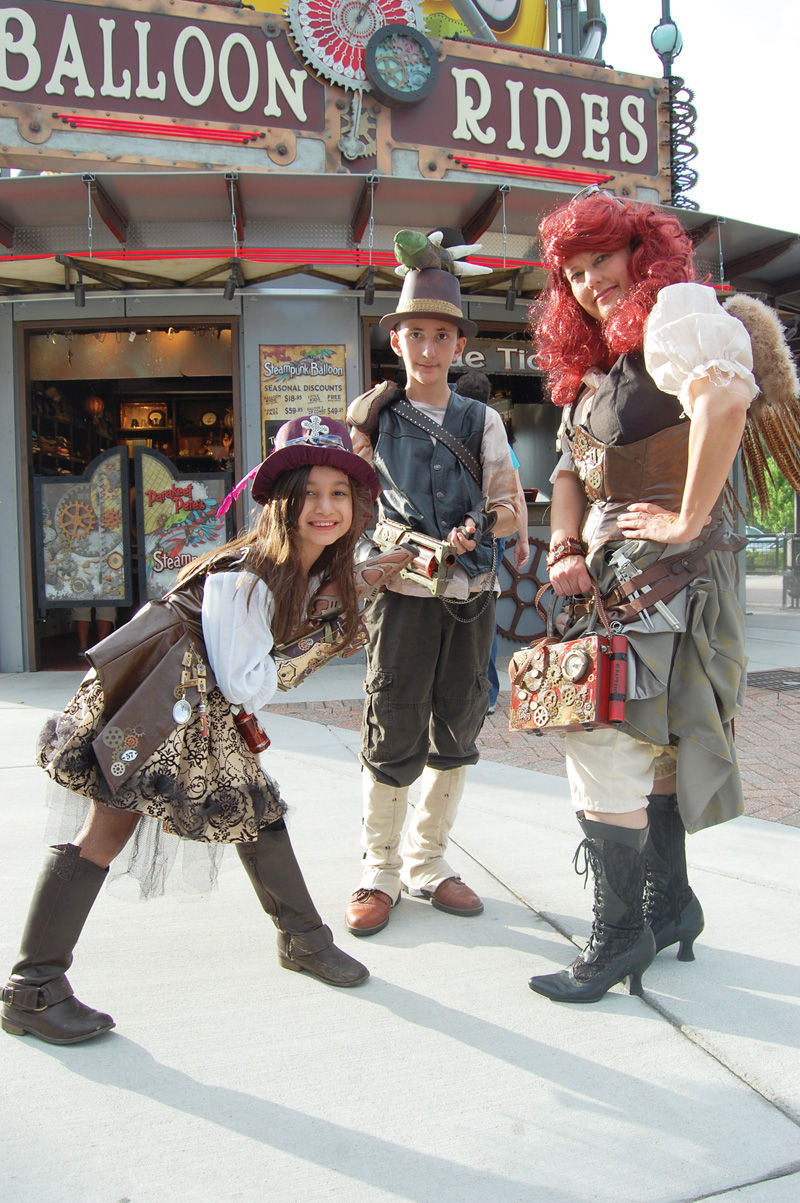 Nine-year-old Angelica Coble stands with Michael, 12, and Debbie, of Tulsa, Oklahoma, after a costume contest at Parakeet Pete’s Steampunk Balloon. 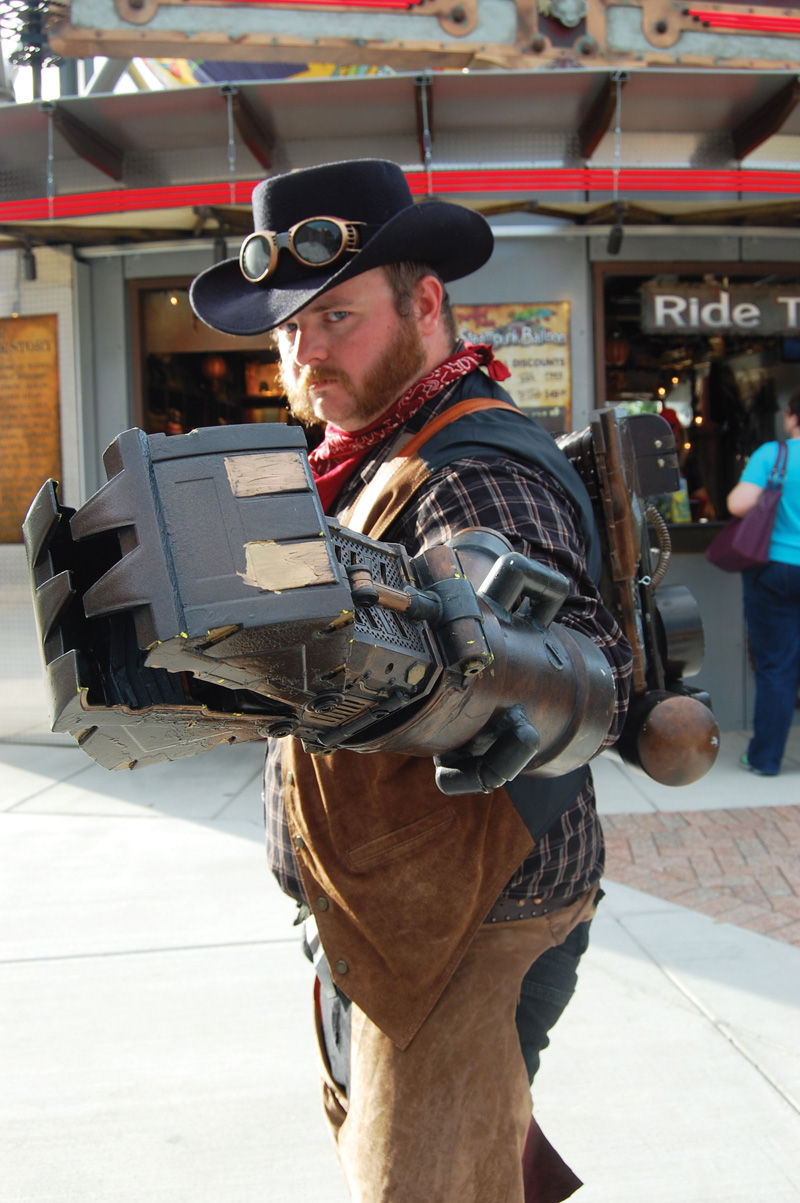 Jonathan Whited shows his claw ensemble, which is a part of his “steam-powered” attire.

Nine-year-old Angelica Coble stands with Michael, 12, and Debbie, of Tulsa, Oklahoma, after a costume contest at Parakeet Pete’s Steampunk Balloon.

Jonathan Whited shows his claw ensemble, which is a part of his “steam-powered” attire.

When driving by the Branson Landing, a new attraction is catching most people’s attention quickly considering it towers more than 180 feet above the horizon.

Parakeet Pete’s Steampunk Balloon is in its third month of operation since hosting a soft opening and is already gaining notoriety, said General Manager of Parakeet Pete’s Attraction and Branson Zipline Emma Hamilton.

Up, up and away

The balloon tower stood in Paris — just in sight of the Eiffel Tower — for about seven years, Hamilton said.

Having a tower surround the hot air balloon solves a problem most tethered ones face, she said.

“When you’re attached to a cable, you can only go up in about eight mile-an-hour winds,” Hamilton said. “If it’s windier than that, they have to stay grounded.”

The attraction opened in March at Branson Landing, Hamilton said.

“It’s iconic with it being the only balloon tower in North America,” Hamilton said. “This is the only one exactly like this in the world.”

It made perfect sense for Parakeet Pete’s to match the theme of the hot air balloon to steampunk, Hamilton said.

“The theme fits so well,” Hamilton said. “With it being Victorian and industrial, there are so many elements that worked together with this whole concept of a balloon and a tower.”

About a dozen people clad in Victorian-style clothing combined with futuristic-looking accessories participated in a costume contest Saturday at Parakeet Pete’s Steampunk Balloon.

Sporting a robotic claw on his arm, Jonathan Whited explained that he first was interested in the steampunk genre before he knew what it was when he watched “Back to the Future 3.”

“I loved that whole style how it was and, as I got older, I found out that style was called steampunk,” Whited said, whose outfit has a steam-powered theme. “I just like the style of it. Everybody has a different style on how they picture it.”

Whited said he designed his accessories, which include a claw and a mounted Gatling gun.

“My persona’s character mangled his arm pretty bad and he used train parts to construct a new arm,” Whited said.

Debbie Coble said she traveled with her children Angelica, 9, and Michael, 12, from Tulsa, Oklahoma, to participate in the costume contest. Dressed as a time traveler, Debbie explained that much of their outfits are recycled and handmade.

“We recycle,” Debbie said. “That’s how we find stuff. We go to thrift stores, junk stores, which I think everybody does.

“I love Victorian. (Steampunk) is just a fun spin on Victorian as well.”

Hamilton said the balloon attraction is open the same hours as the shops at Branson Landing.

“We’re always looking at the next project,” Hamilton said.