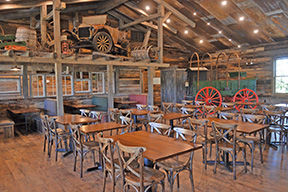 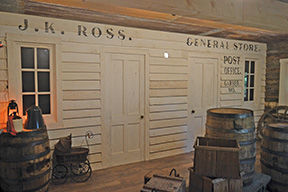 From the restaurant, guests will have the ability to travel from their table straight into the ticket and gift shop. The hall connecting the two buildings features a re-creation of the J.K Ross General Store and Post Office that was once located in the former town of  Garber.

From the restaurant, guests will have the ability to travel from their table straight into the ticket and gift shop. The hall connecting the two buildings features a re-creation of the J.K Ross General Store and Post Office that was once located in the former town of  Garber.

Shepherd of the Hills Adventure Park in Branson will soon be welcoming guests inside the newly constructed Shepherd’s Mill Restaurant for a bite to eat.

With a scheduled opening date of Monday, Sept. 9, Shepherd’s Mill will offer park guests options for breakfast, lunch and dinner, all while keeping the theme  of the late 1880’s adventure park alive. Park Co-owner and General Manager Jeff Johnson said when he, and co-owner Steve Faria, purchased the park in the summer of 2017, one of the first things they identified was the need for a restaurant inside the park.

“I knew there had been a restaurant here called Aunt Mollie’s Cupboard years ago, sat right where we are now,” said Johnson while sitting at one the new tables. “That restaurant burned down in 2002, and within three years (the park) had lost an average attendance of 130 people a night. Just by going through attendance records, in the first year it was a pretty significant drop all the way around.”

Plans to follow through with a new restaurant began to form as guests coming to watch the Shepherd of the Hills play would ask when they arrived where a good place to eat would be.

“They would show up here for the show, and the show starts at 8:30, and it’s 6:30 or 7 and they’re asking where they can eat,” Johnson said. “We would have to say ‘Well you can go down the hill a couple of miles and Olive Garden’s down there or Cracker Barrel or whatever. The common refrain from most all of the people that would come up to us is “Where can I get some good home cooking?’ So, it was pretty easy to target, obviously, with our late 1800’s theme and that kind of food it was pretty easy for us to say we need good home cooking.”

“There’s a line in the (Shepherd of the Hills) play that our character Buck Thompson says, which is ‘Old Matt invited us to come over for breakfast and to stay all day,’ and that’s what we want for our customers,” Johnson said. “Come on out for breakfast, and stay all day.”

Planning for the restaurant started in Jan. 2018, and vertical construction of the building began later that year in July. The restaurant will feature an assortment of both booths and tables, an outdoor patio for seating and a basement area that has the potential to become a place for restaurant overflow, a banquet space and/or an arcade.

The décor featured inside the restaurant will provide guests with a unique dining experience. Johnson said a great example of that is being able to sit directly beneath a Model-T Ford that has been placed in a loft above a row of booths.

“We wanted a very rustic look and feel to fit with who we are. It’s called Shepherd’s Mill Restaurant, so it’s a nod to our story and the background here,” Johnson said. “Whether it’s the chuckwagon or the old Post Office from (the city of) Garber and General Store that we’ve recreated. There’s stuff that you would not see or find at most restaurants”

The restaurant also connects right into the Shepherd of the Hills Playhouse, which Johnson said is very convenient for the kitchen staff.

“So, the playhouse theater is a dinner house theater that we can do any number of dinner shows, and we built this so the kitchen is on one end and the kitchen can go right down into the theater to supply food,” he said. “Dinner shows are obviously a very popular thing and so by just being able to wheel the food right down from the kitchen made it pretty easy.”

Johnson said, when the restaurant opens on Sept. 9, it will be a soft opening. He said a larger grand opening celebration is being planned for the future. Shepherd’s Mill will be open seven days a week from 7 a.m. to 9 p.m.

Just in the last couple years a number of new attractions and features have become part of the Shepherd of the Hills Adventure park, including a Zipline Canopy Tour, a ropes course, an ATV adventure and, inside The Playhouse, Shad Heller’s Original Toby Show.

Visit theshepherdofthehills.com for more on everything there is to see and do at the park.