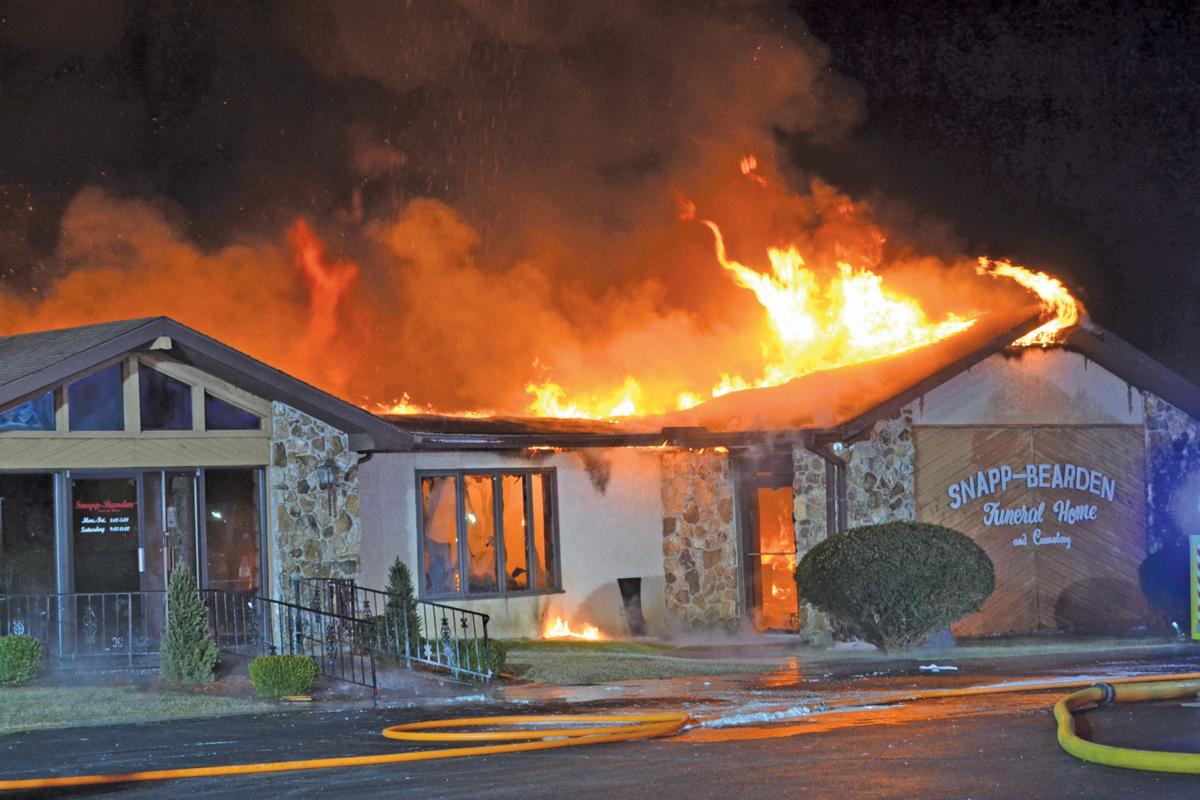 On Thursday, Feb. 13 the Snapp-Bearden Funeral Home and Crematory, near Branson caught fire. The cause is still under investigation. 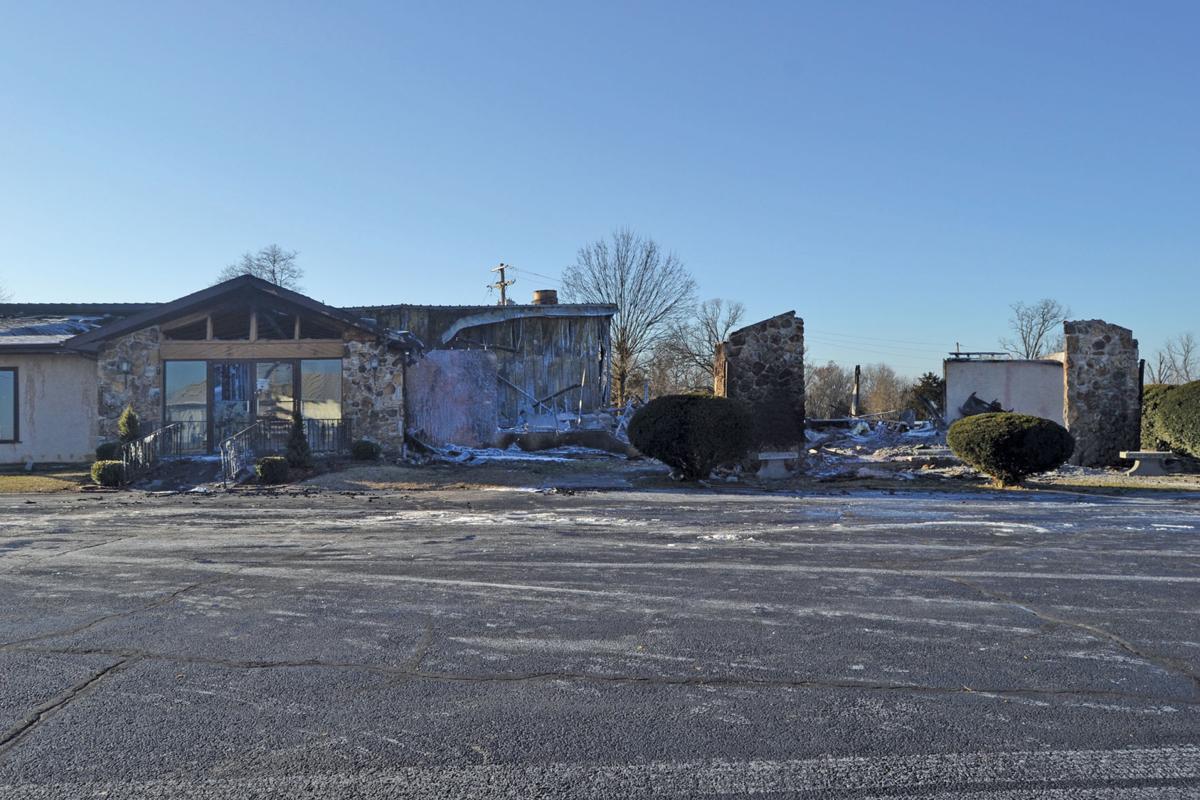 Remnants of the February fire that destroyed the Snapp-Bearden facility on E. Missouri 76 remain. The owners intend to rebuild.

On Thursday, Feb. 13 the Snapp-Bearden Funeral Home and Crematory, near Branson caught fire. The cause is still under investigation.

Remnants of the February fire that destroyed the Snapp-Bearden facility on E. Missouri 76 remain. The owners intend to rebuild.

The owners of Snapp-Bearden Funeral Home and Crematory near Branson are constructing plans for the future following a fire that destroyed their facility on E. Missouri 76 in February.

In 1948, Irven Snapp and his wife, Phoebe, moved their monument business to Branson from Kirbyville. In 1959, they purchased the Ozarks Memorial Park Cemetery from Claude and Dorothy Binkley, according to Irven Snapp’s online obituary.

In 1976, Darrel Bearden and his wife, Susan, moved back to the Branson area and became involved in the monument and cemetery business. In 1984, the Snapp-Bearden Funeral Home was built, next to the Ozarks Memorial Park Cemetery, to combine the monument company, the funeral home and cemetery into one location.

After operating for more than 35 years, the Snapp-Bearden Funeral Home was deemed a “total loss” from the fire in the late evening hours of Feb. 13.

In the weeks since the fire, Snapp-Bearden Funeral Home Director Darrel Bearden said that they’ve continued to do their best to offer services by working out of their location on the north side of Branson, across the street from Cox Medical Center Branson.

He added that they’re also working with a few area funeral homes and numerous churches who have offered their locations as places for them to conduct funeral services.

Bearden explained that, at this point, they’re working with an architect to design a new funeral home facility, and that they are planning to complete the construction in phases.

“We would hope in phase one to have our office portion back open and hope to have an area where we can store our vehicles that we need to store for funeral use and cemetery use and monument use,” said Bearden. “We would like to have our preparation room back up and going.

“We would like to have our monument shop back up and going, which was pretty well demolished in the fire.”

The second phase of the project would include construction of a new chapel to hold services. When asked about a timeline for each of the phases, Bearden said that they have an estimated timeline, but it’s hard for him to say if that will be possible.

“I know one thing we’re probably going to be up against this time of year is a lot of people are building and thinking about building coming into spring. So getting contractors on site might be a little bit tough,” Bearden said. “But for a timeline, I think we’d like it to be phase one within three months, 90 days to 120 days. The other part of it, we’d like to be in six months.

“We should be showing some really good progress in six months.”

A total of 40 firefighters with the Western Taney County Fire Protection District responded to the call. While most of the firefighters were working to extinguish the fire, Bearden said that there was also a crew working to pull the facility’s records and save other items out of the burning building.

“Probably the most important thing, particularly in the funeral home side of it, is record-keeping. The firefighters were able to get nearly 100% of our records out, due to going back into what could have been a tough situation,” Bearden said. “It can’t be replaced as far as the history and what people we’re desiring to have in the future, as far as funeral plans and that type of thing. They were very good at getting our records out and gave it a good effort to try and save what they could there at the facility.”

On top of their appreciation for the firefighters and other emergency personnel that responded to the fire, Bearden said they’re also appreciative of all their friends, relatives, churches, schools and everyone else who has reached out to them since the fire.

“I’ve been in floods, and I’ve been in wind, but I’ve never been in a fire. You just need a lot of guidance as to what to do. You’re just in shock the first two or three days, and you don’t really know what to do first,” Bearden said. “When people say ‘What can we do for you?’ We’d just say, ‘Hey, pray that the good Lord will give us guidance to know what we need to do now to get started putting things back together.’

As of press time, the cause of the fire is still under investigation. Western Taney County Fire Chief James Lannan said the working theory was that the fire started inside, on or under one of the vehicles that were parked underneath the building’s car port. From the car port, the fire advanced into the attic and then into the rest of the building.

There were no injuries reported and there were no services planned or bodies being prepared at the time of the fire.