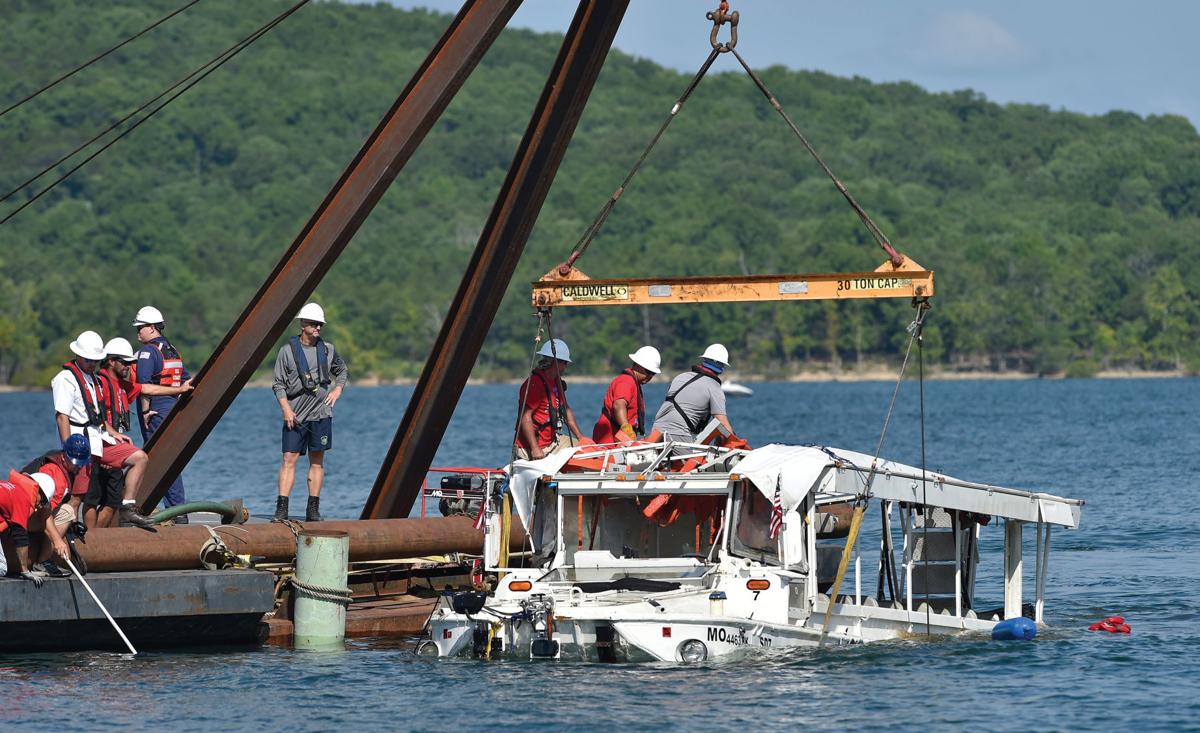 Members of a U.S. Coast Guard crew use a special barge and crane to retrieve the duck boat that sank in Table Rock Lake July 19, 2018. 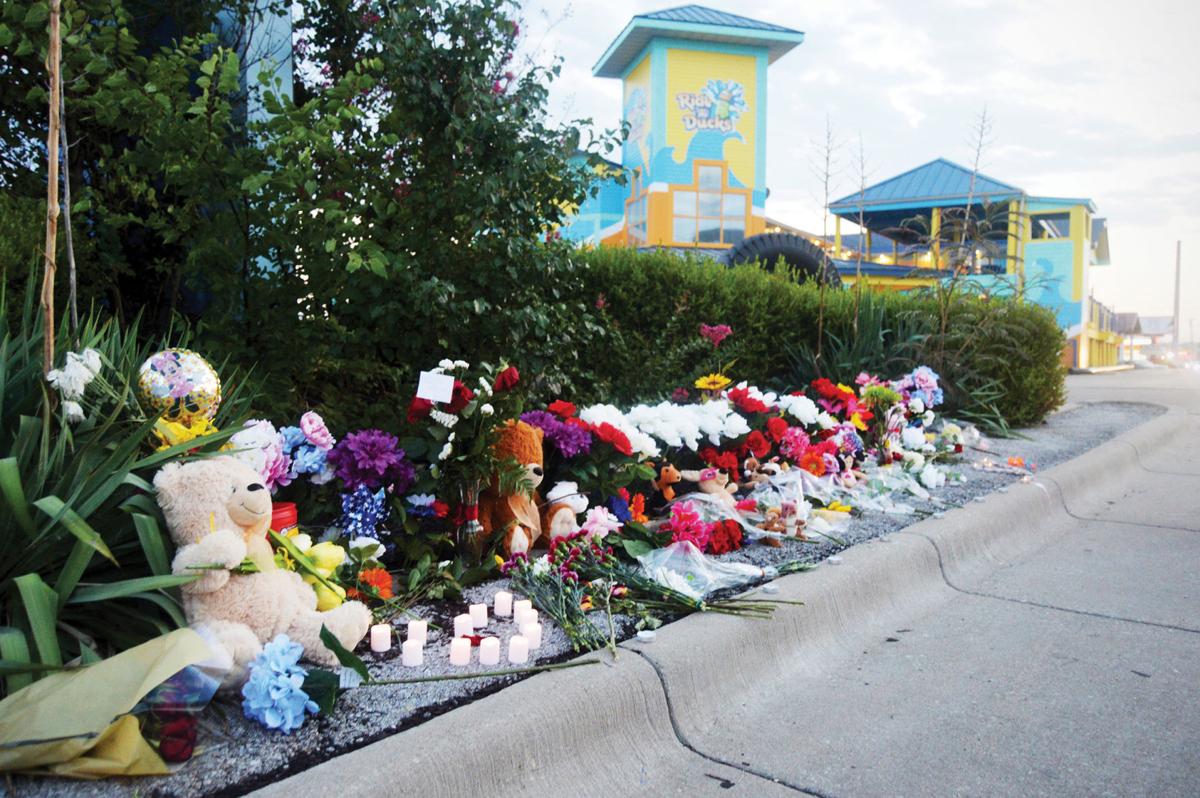 Members of a U.S. Coast Guard crew use a special barge and crane to retrieve the duck boat that sank in Table Rock Lake July 19, 2018.

Friday marks one year since 17 people lost their lives on a duck boat in Table Rock Lake.

In the 12 months since that tragedy, there have been lawsuits, criminal charges, prayers and proposed legislation. A deputy was honored as a hero. Undoubtedly, others acted heroically that day, as well. Ripley Entertainment chose not to re-open Ride the Ducks Branson, replacing it with an entirely different business, and at least one other duck operation in the country has shut down.

Here, the Branson Tri-Lakes News takes a look at what happened that day, and in the year after.

On July 19, 2018, two duck boats, including Stretch Duck 07, plunged into Table Rock Lake for the floating portion of a tour of the area, just like thousands had done over the previous decades. The wind from an incoming storm picked up, and Stretch Duck 07 sank.

On board were two employees and 29 other individuals enjoying Branson vacation. One of the employees, and 16 of the vacationers, drowned in the lake.

A Cox Medical Center Branson spokesperson said that, of the 14 survivors, seven were taken to the hospital, although one of those refused treatment. Initially, two patients were critical, but stable, condition with symptoms consistent with near-drowning.

That evening, the city of Branson set up a place at city hall for those who were missing a family member.

That evening and the next day, local, state and national officials, including President Donald Trump, issued statements of condolence to the victims and their families.

At least three candlelight vigils took place over that weekend, at Brookside Church, College of the Ozarks Williams Chapel and at Ride the Ducks.

The survivors included 13 passengers ranging in age from 10 to 64, as well as the driver Kenneth McKee, 51 at the time. Among those 13 passengers was Tia Coleman and her 13-year-old nephew. Another nine members of their Indianapolis family were among the dead. Tia Coleman lost her three children and her husband.

In the following weeks, lawsuits were filed against several defendants, including former Ride the Ducks Branson owners Herschend Family Entertainment and current owners Ripley Entertainment, Inc., who purchased the business in December 2017.

A recent federal court document shows that Ripley has settled with 19 of its 33 civil cases, including those with members of the Coleman family. Details, such as dollar amounts, have not been made public.

Initially, the Coast Guard called together a Marine Board of Investigation to look into the incident. Less than three weeks later, the Coast Guard referred the issue to the U.S. Department of Justice to consider a criminal investigation. As a result of the DOJ’s investigation, three individuals are now facing felony charges.

McKee, now 52, was indicted in November 2018. The indictment charged him with 17 counts of misconduct, negligence, or inattention to duty by a ship’s officer, resulting in the death of another person. Last month, in a superseding indictment returned under seal by a federal grand jury in Springfield, federal prosecutors added 13 counts (one for each of the other survivors) for negligent operation of a vessel.

As well as those additional counts against McKee, the new indictment includes charges against two more Ride the Ducks employees: Curtis P. Lanham, 36, of Galena, and Charles V. Baltzell, 77, of Kirbyville. Lanham was employed by Ripley as the general manager at Ride the Ducks Branson. Baltzell was employed by Ripley as the operations supervisor at Ride the Ducks Branson and was acting as a manager on duty. They are each facing 17 counts of misconduct or neglect of ship officers, and 13 counts of negligent operation of a vessel.

According to federal court documents, McKee is scheduled for a jury trial on Dec. 2 in Springfield federal court (the trial date has been delayed twice). On June 28, he pleaded not guilty.

In August, then-Missouri Attorney General Joshua Hawley filed a suit to try to prevent Ride the Ducks from being allowed to operate in the state. In November, Hawley was elected to U.S. Senate, but that suit is  still working its way through Taney County court.

As a senator, Hawley introduced a bill in April called the Duck Boat Safety Enhancement Act of 2019, or S. 1031. It was introduced in April and was assigned to the Committee on Commerce, Science, and Transportation, where it remains.

The lawsuits have made numerous accusations against Ripley Entertainment, Inc.; Branson Duck Vehicles, LLC; former owners Herschend Family Entertainment; and others. Among those accusations are inadequate training, not requiring (and in fact, discouraging) the wearing of life jackets, not heeding weather warnings, not following severe weather protocol, not improving buoyancy following duck accidents in other locations, and not getting the vessel out of the water in a timely fashion when the weather did turn severe.

Stone County Sheriff’s Office Sgt. Shawn Fields was honored with a visit from Missouri Gov. Mike Parson and Lt. Gov. Mike Kehoe for his actions the night of the duck boat tragedy. Fields was working off-duty security for the Showboat Branson Belle at the time, and assisted in rescue efforts.

The city of Branson named police officer Jennifer Easton as its employee of the month for the work she put in assisting families in the days after the incident.

About three weeks after the incident, Keller Williams, Great American Title and USA Mortgage sponsored a free picnic lunch at Table Rock Lake State Park to show their appreciation and gratitude for all first responders.

In late 2018 and early 2019, Branson aldermen considered a donated memorial to the victims of the duck boat incident, but that decision was ultimately tabled until a future date, possibly in 2020. The plan was for it to have been placed in Old School Park along 76 Country Boulevard.

Hospital leaders at Cox Branson are firing up the grill to treat area law enforcement and first responders to a free lunch to show our appreciation.

“A barbecue can’t adequately thank them for everything they do to support us, and their great commitment to keeping our communities safe,” says Eric Clay, CoxHealth’s Public Safety director. “However, we hope they come out, enjoy the event and know we truly appreciate all they do every day.”

The meal will be served on Friday, July 19 from 11 a.m. to 2 p.m. on the hospital’s patio area and will move indoors if it rains. The event includes barbecue chicken, bratwursts, hamburgers, hotdogs, ice cream and more, as well as prize drawings. Carry-out will be available for those who are on-duty.

Similar events are being held at CoxHealth campuses in Springfield, Monett and Lamar.

According to accounts from that day, taken from court records and Branson Tri-Lakes News archives, the National Weather Service had issued a severe thunderstorm watch for the area at 11:24 a.m.

Stretch Duck 07 was set to leave Ride the Ducks at 6:30 p.m. At 6:28, Operations Supervisor Charles V. Baltzell boarded Stretch Duck 07 and told the captain and the driver to do the water portion of the tour first, to beat the storm. At 6:32 p.m., the National Weather Service issued a sever thunderstorm warning in areas including Table Rock Lake, with winds expected to reach 60 mph. At 6:33, the duck vessel started its tour. At 6:50, the captain began a safety briefing in which he told passengers they did not need their life jackets. The duck entered the lake at 6:55. From 7:01 to 7:02, the wind increased significantly. From 7:04 to 7:05, an alarm indicated dangerous levels of water in the bilge. At 7:09, the first 911 calls were recorded by Stone County Public Safety Dispatch. At approximately 7:13, Stretch Duck 07 submerged.

Ride the Ducks Branson remained closed for the 2018 season. This year, Ripley Entertainment announced that a new business would replace Ride the Ducks, and in June, the company opened Top Ops. It features laser tag, an outdoor maze, a virtual shooting gallery and more.

“Branson is a tourism community, and that’s what it thrives on, so we wanted to be able to contribute to the economy of Branson with our location, especially being right there on the main strip, and to be able to continue to employ the people of Branson,” said Smagala-Potts in a March interview. “We really are thinking about the community first, and we also want to give back to the community.”

In Pittsburgh, a similar duck tour operation, owned by a different company, ultimately decided against opening this year. Just Ducky Tours announced on its website in June that it would not be operating this year.

The business had closed early last year, in September, due to lagging business. According to reporting by the Pittsburgh Post-Gazette, Just Ducky Tours had originally planned to open in 2019. Owner Michael Cohen told the paper that, if not for the incident in Table Rock Lake, his business would still be operating.

With the one-year anniversary of the duck boat tragedy coming up on Friday, Ripley Entertainment issued the following statement by email:

“A year ago, an unprecedented storm on Table Rock Lake changed many lives and the Branson community. Not a day has passed that we don’t think about those who lost their lives and their families.

“We know we can never fully understand the pain and challenges the families who were affected by the accident have faced, but Ripley Entertainment has worked hard to offer help wherever we can. We are deeply committed to supporting these families. A recent court filing outlines the settlements we have reached with many of the families, and we continue to work with others.

“As we look to the future, we are committed to Branson and this amazing community. Our Ride The Ducks building and property are important to the Branson tourism economy, and we want to ensure it continues to contribute. To do so, we opened the new Branson Top Ops attraction to serve and encourage tourism, create jobs for the hardworking people who live and work here, and support the surrounding businesses.

“We saw firsthand the impact First Responders have in this community. To show our appreciation, ten percent of all admissions proceeds, with a minimum amount of $100,000, will be donated to local Police, Fire, and EMS, who put their lives on the line to make Branson a safer place.

“We are dedicated to working with the community of Branson, and continuing our support of the families and employees who were impacted by the accident.”

Information in this story is taken from Branson Tri-Lakes News archives, except where otherwise noted.