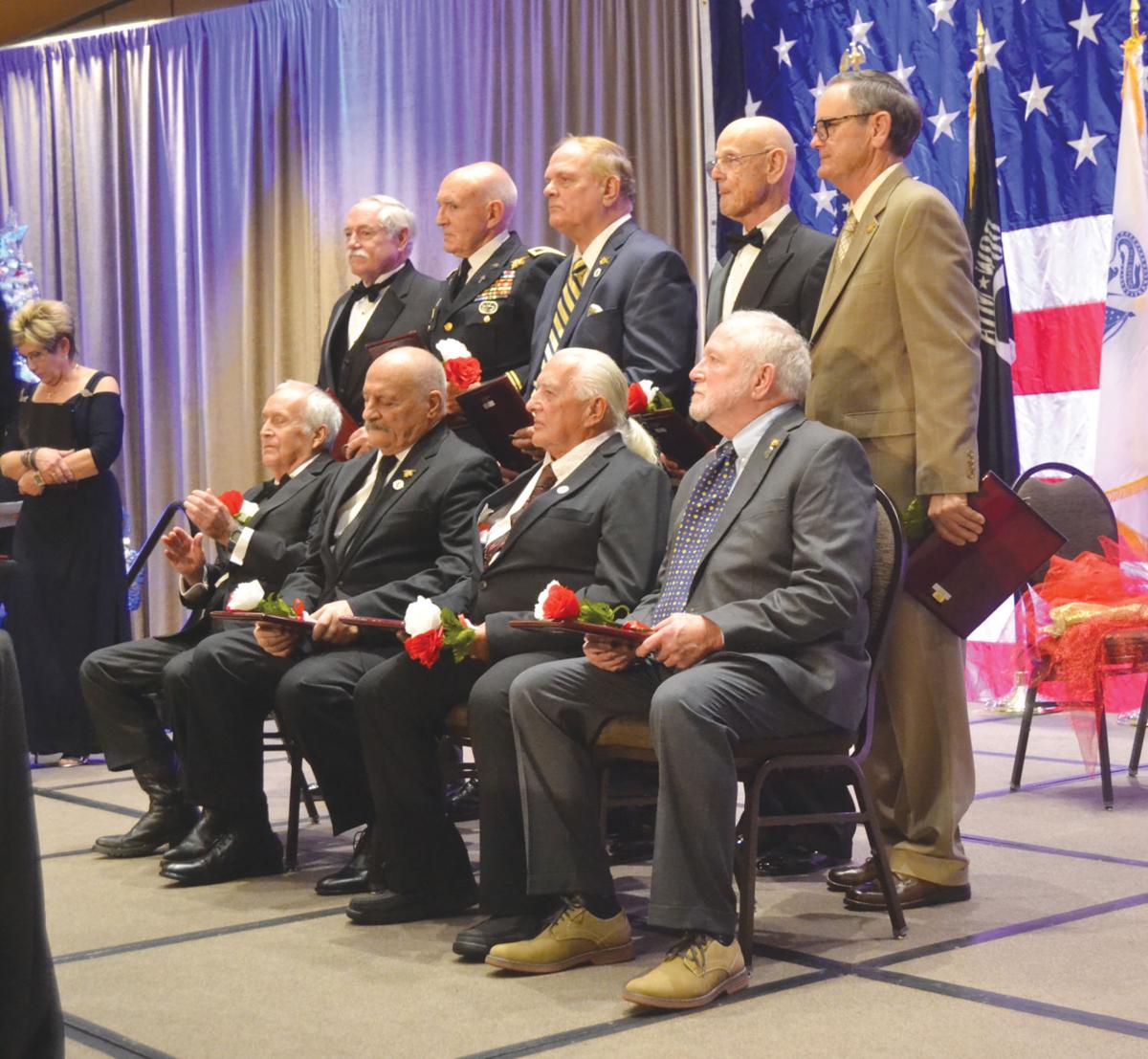 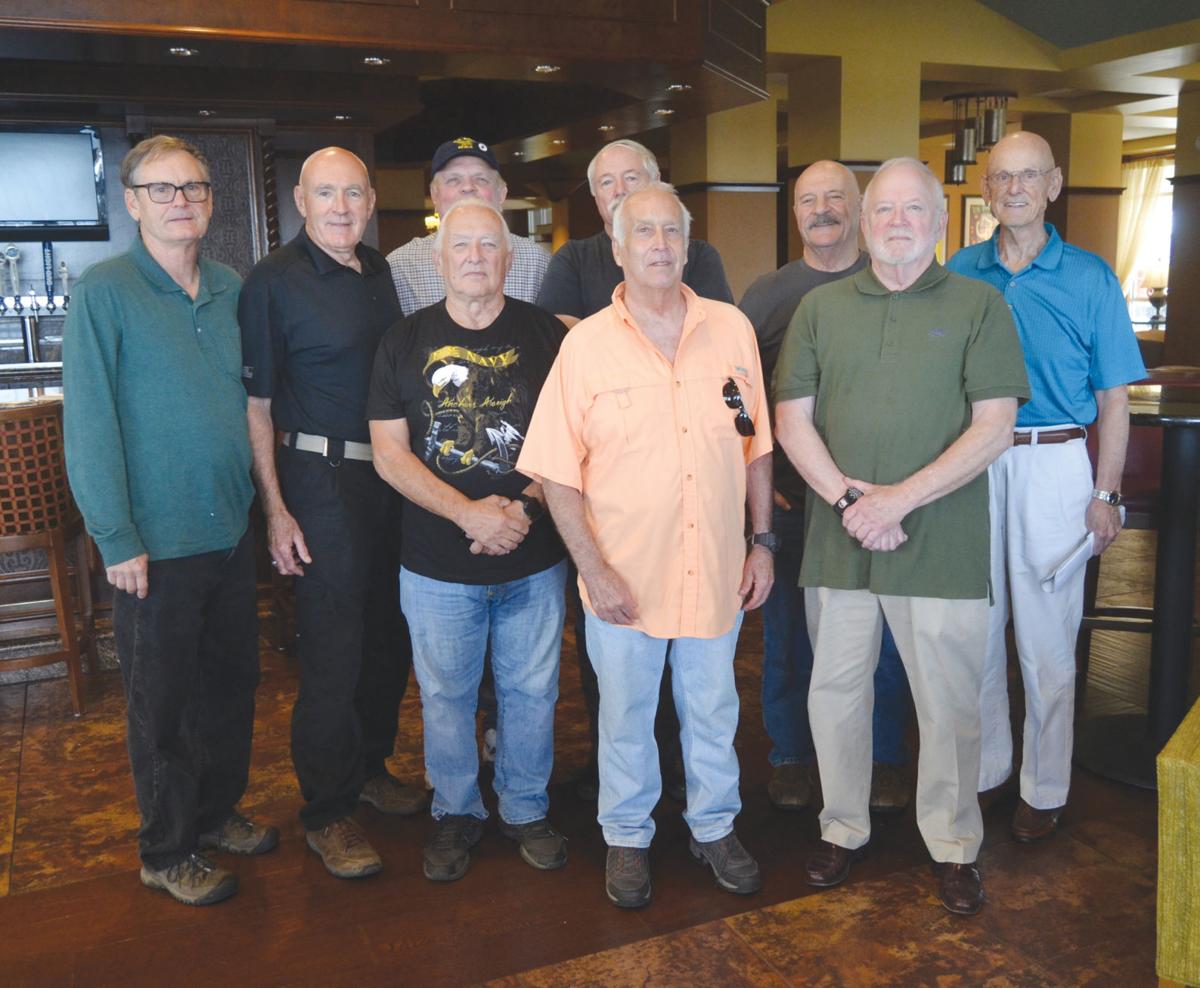 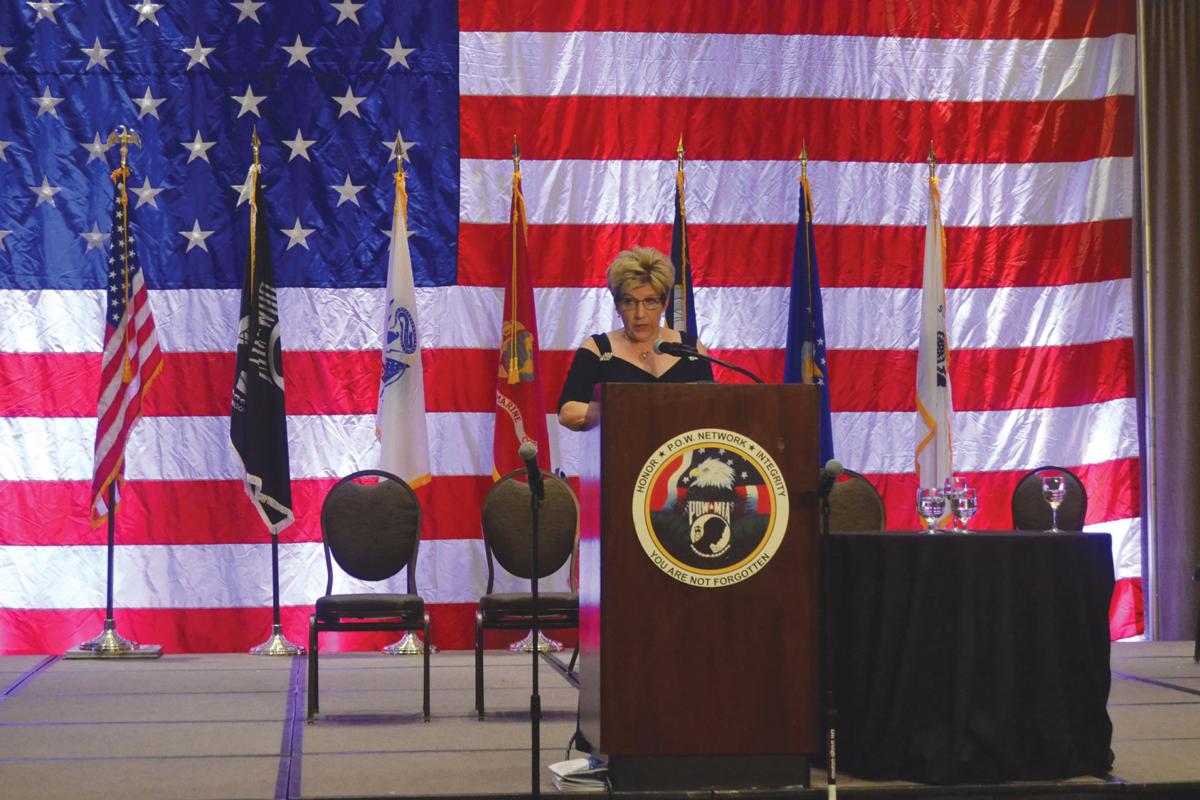 P.O.W. Network Chairman Mary Schantag addresses the crowd at the 23rd Annual Military Gala & Banquest Sunday at the Chateau on the Lake Resort in Branson.

P.O.W. Network Chairman Mary Schantag addresses the crowd at the 23rd Annual Military Gala & Banquest Sunday at the Chateau on the Lake Resort in Branson.

On Sunday, a group of Vietnam veterans were together for the first time since they shared a tragic night together in 1972 in the Gulf of Tonkin.

For decades, they weren’t allowed to talk about the incident – not even to each other.

And because of the secrecy of their mission, they went decades without being recognized for contributions in the Vietnam War.

During the 23rd Annual Military Gala & Banquet at the Chateau on the Lake Resort in Branson, hosted by the P.O.W. Network, these men had the chance to visit with each other and receive a long-overdue, warm greeting from a roomful of appreciative veterans and family members.

“To be involved in something that important, but was never spoken of again, just to make sure this group got recognition is what is important,” said Richard Hetzell during an interview before the banquet.  He was one of 14 Navy SEALs assigned to take part in a secret mission to aid POWs in their escape from the infamous Hoa Lo prison, more commonly known by its nickname, the “Hanoi Hilton.”

The mission was known as Operation Thunderhead. Along with the 14 Navy SEALs from Alpha Platoon, were seven members of an Underwater Demolition Team (UDT) who were to deliver SEALs in underwater Swimmer Delivery Vehicles (basically a tiny submarine, but filled with water) to a spot at the mouth of the Red River where they were to look for the escaping prisoners and help them to safety.

Unfortunately, the mission did not go smoothly.

On June 3, 1972, the first team, made of two SEALs and two UDT individuals, endured strong currents and, after running out of battery power in their Swimmer Delivery Vehicle (SDV), were unable to reach an island where they were to watch for the POWs. They had to scuttle the Swimmer Delivery Vehicle (SDV) and swim out to sea where they were later picked up. The four were to be delivered back to the USS Grayback, a submarine from which the mission was launched.

When it was believed the Grayback had been spotted, the four-member crew jumped from the helicopter. Darkness and high waves made it hard to judge the helicopter’s height, and a strong tail wind added to the helicopter’s speed. The result was a jump higher and faster than was safe. The leader of the crew, Lt. Melvin Spencer Dry, was killed immediately when he hit the water. Another member, Seaman Thomas Edwards, was severely injured.

Edwards, who was in Branson Sunday, said he suffered several injuries, including broken ribs. It turned out, his injuries were worse than he – or anyone – thought. He said he had an aneurysm that wasn’t discovered for several years and he finally had surgery on the aneurysm in 1987.

“It showed up during a physical,” he said.

In the meantime, a second SDV team had been deployed from the Grayback. They also encountered trouble, and their vehicle sank in 60 feet of water. They managed to meet up with the survivors of the other SDV team and were picked up the next morning.

The mission continued until the end of June, but no escaping POWs were ever located.

That’s because there never were any escaped POWs to be found.

Unknown to the Navy SEAL teams, the North Vietnamese had relocated the prisoners temporarily, causing the escape plan to be canceled.

The one casualty from the mission, Dry, ended up being the last Navy SEAL to be killed during the Vietnam War. However, it was years before his sacrifice was properly recognized. Because the mission was classified, the military created a cover story in which Dry was killed during a training exercise. Because of that, Dry’s family did not know the true circumstances of his death for years, and Dry’s name was not included at the Naval Academy’s Memorial Hall. Today, however, his name is included.

The P.O.W. Network awarded plaques to all the men involved in Operation Thunderhead, including those who have since passed away or who could not attend Sunday’s banquet.

The men of Operation Thunderhead are: