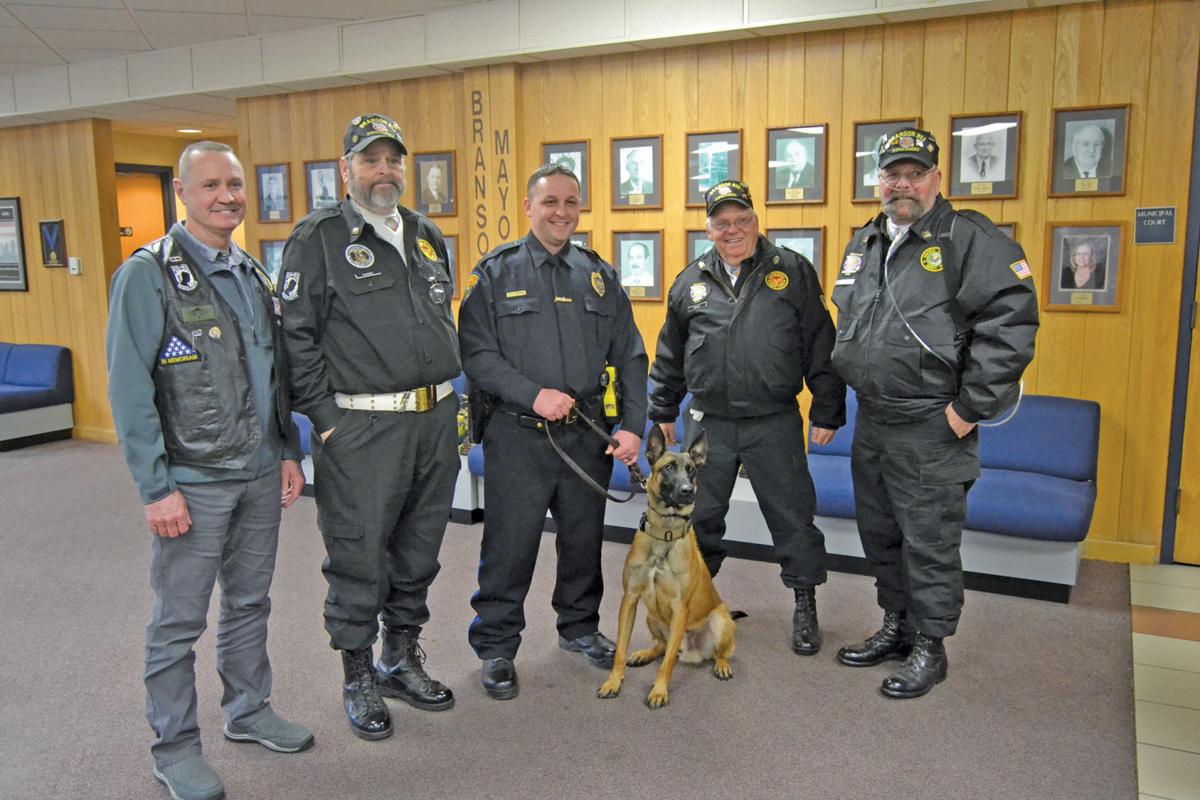 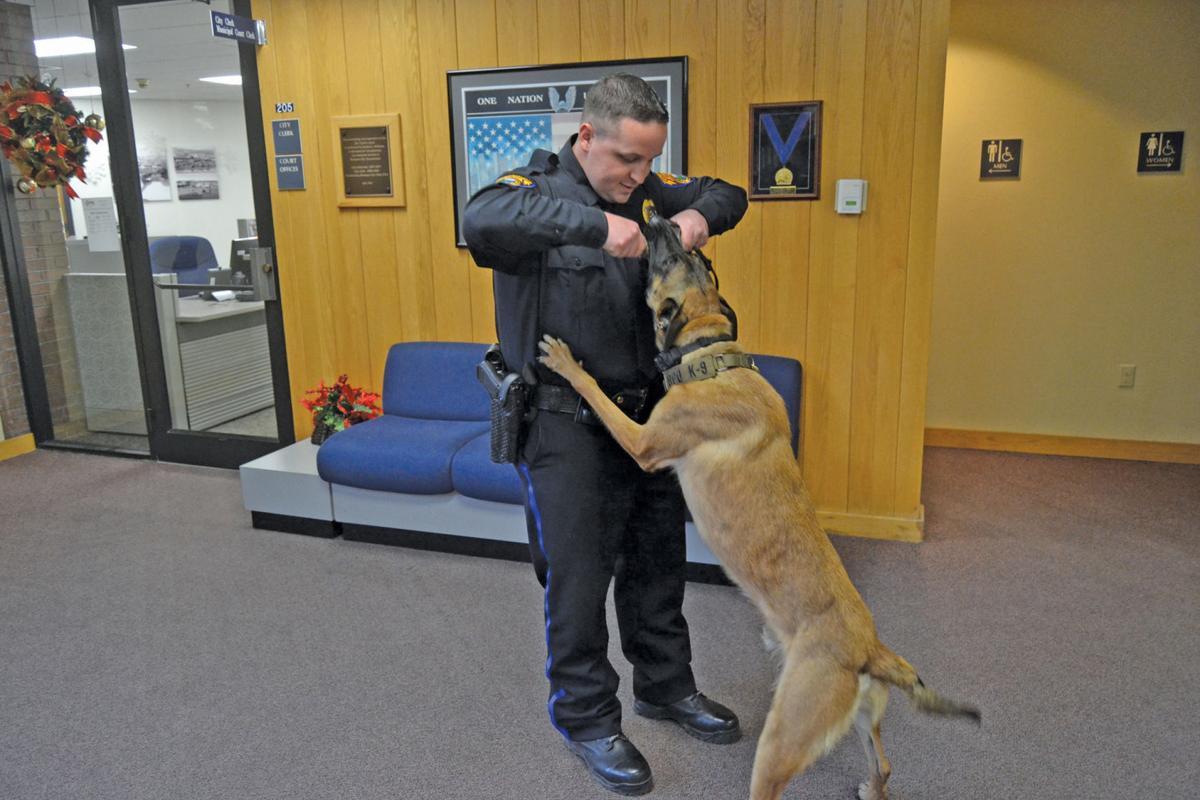 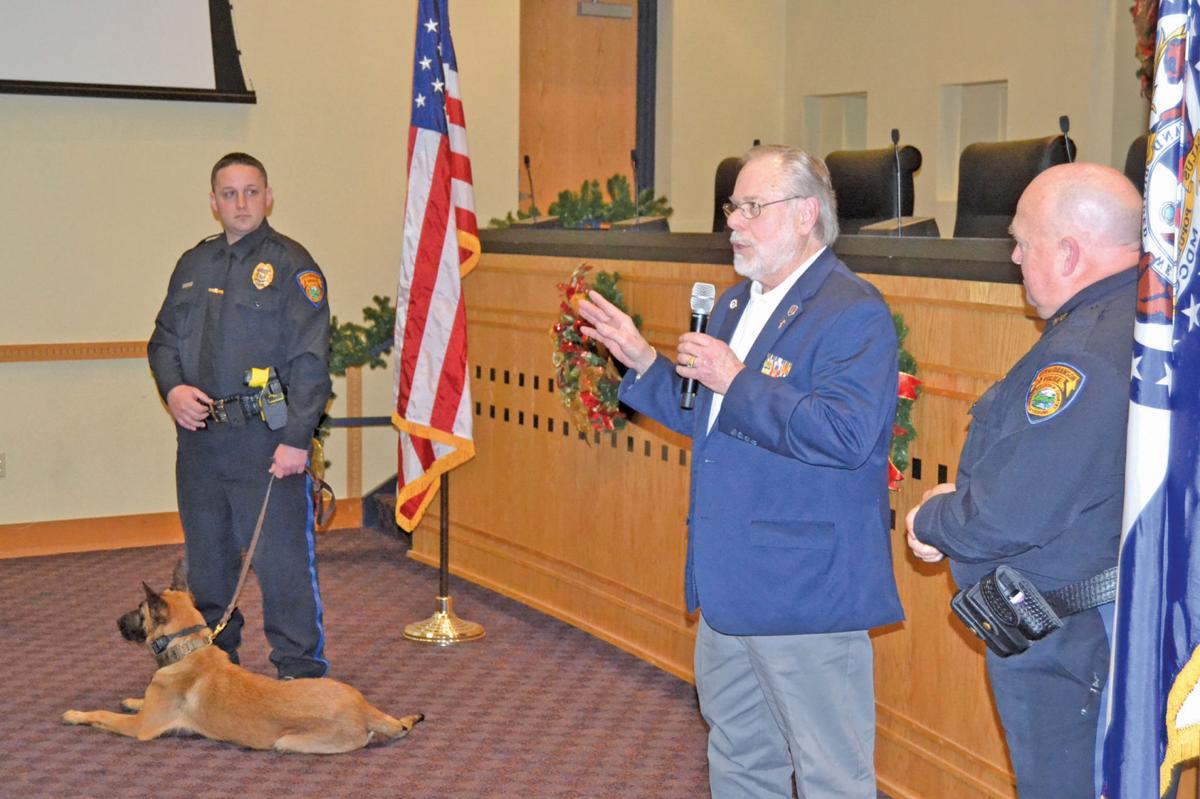 After months of physical and mental training, the newest and furriest member of the Branson Police Department was recognized during a badge-pinning ceremony Dec. 20 at the Branson City Hall.

The purchase, training and shelter of the new Branson K-9 team was made possible by a $20,000 donation by the Vietnam Veterans of America Chapter 913. The donation was a culmination of funds raised during the 15th Annual Veterans Assistance Benefit Show in 2018.

Harvey said that after 400 hours of training, it feels pretty good to finally be out in the field with Cobra.

“It’s mentally exhausting. It’s physically exhausting for both me and the dog,” said Harvey. “It tests your patience for sure. So it feels pretty good to actually be back at work and catching bad guys.”

Harvey also explained that when training begins, they don’t go straight to the big stuff, they start out just playing together.

“It starts with just playing fetch, building rapport with the dog and putting the narcotic odors on the dog so he can recognize them,” Harvey said. “Once he knows the odors, we teach him how to sit on those odors, to indicate on those odors. Once he’s got the narcotic side down, we start the patrol work, the find and bite, the detention and all that different stuff. Building searches, tracking, evidence search and all those things that he can do now.”

While Cobra’s official badge-pinning ceremony didn’t take place until nearly Christmas, Harvey said they’ve actually been out in the field together since the end of November.

“It’s been good. He’s had a couple finds,” he said. “We got 38 grams on his first vehicle that he sniffed. That’s a pretty good pop for drugs.”

Harvey added that Cobra is excited to be out in the field, but there are certain things he’s still getting used to doing.

“He’s trying to acclimate from the difference in training when it’s just go, go, go, go, go non-stop to now there’s a lot of time in the car. So he’s just got to get used to that,” said Harvey. “He’s still a high-drive dog. So leaving him in the car for long periods of time, he’s like ‘Can we go to work yet?’”

Even though Harvey and Cobra have already completed a ton of training in recent months, Harvey said there is still more training to be done.

“So we still train with our training group in Greene County once a week. It’s a 10-hour day,” Harvey said. “We get 40 hours additional training every month since, and we need it. There’s a lot of stuff just to maintain what we have and not lose it. Obviously, as he matures and processes, we want him to progress, and we expect more out of him.”

When it came to naming the new K-9 Officer, the department presented that honor to the VVA Chapter 913. At the Dec. 20 ceremony, Public Relations Director Bob Sarver explained that Cobra was named after the Cobra helicopters that were used during the Vietnam War.

He said that as the Cobra Helicopters aided soldiers on the battlefield, K-9 Officer Cobra will be there to aid the Branson Police Department.

Harvey said Cobra lives with him. He added that when the weather allows it, Cobra enjoys spending time outside in the spacious kennel built for him by the city.

Harvey and Cobra will be scheduled to work opposite the current K-9 Team of Branson Police Officer Brendan Gamble and K-9 Officer Tygo. With two K-9 Teams available, the Branson Police Department and other area agencies will have access to a K-9 officer nearly every day of the week.