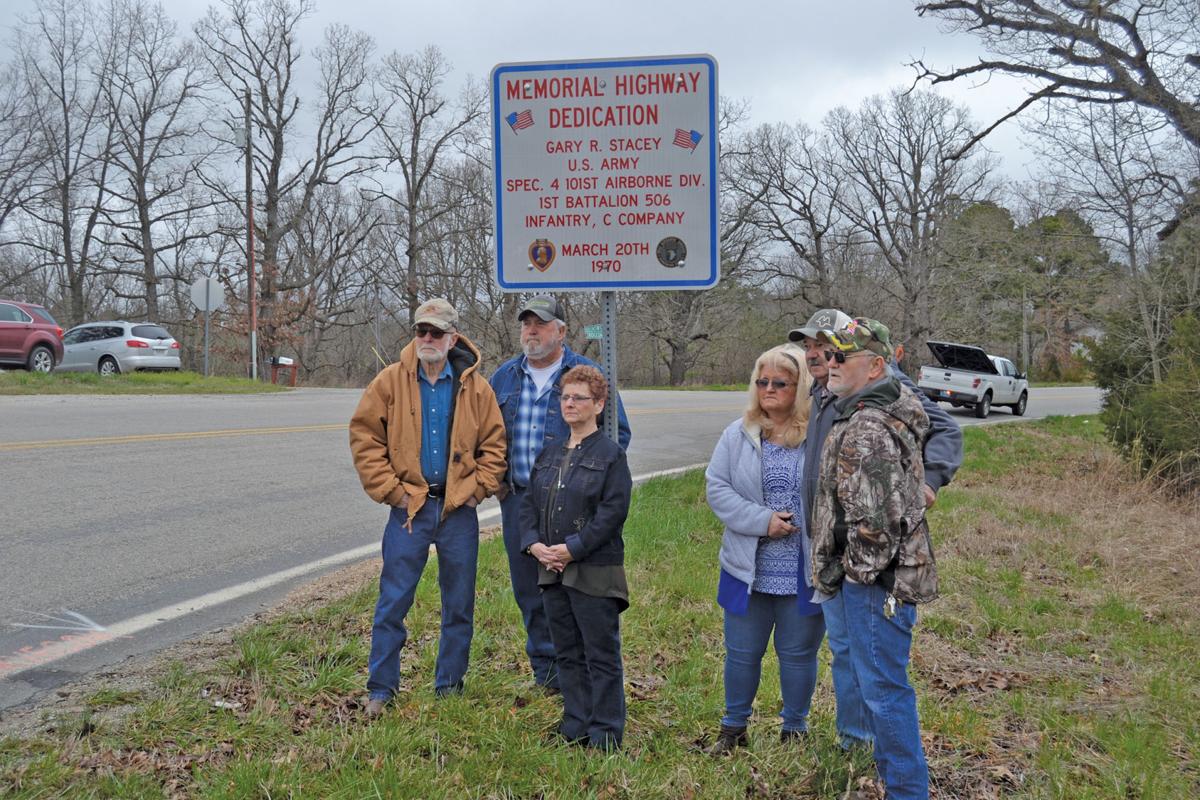 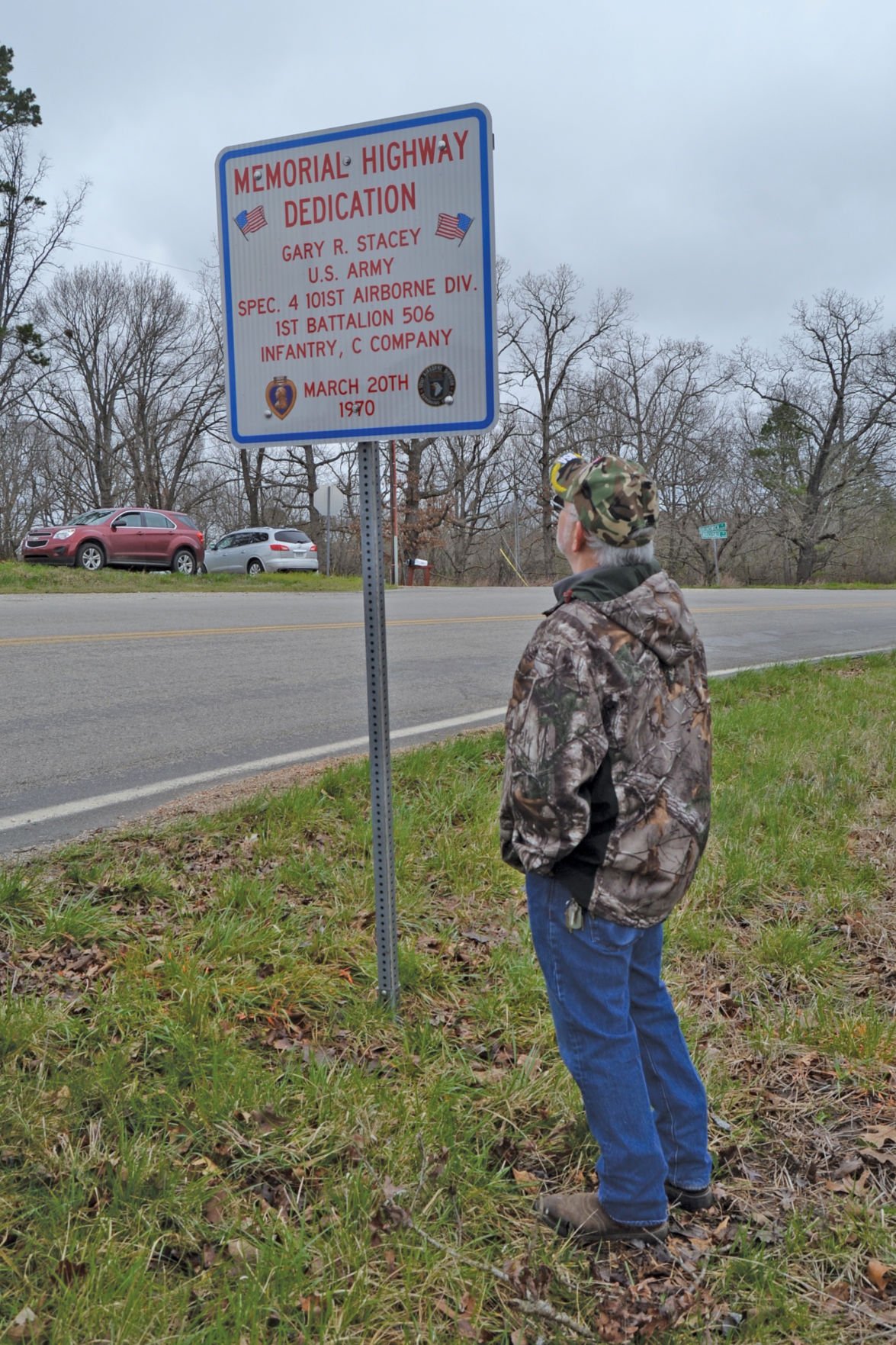 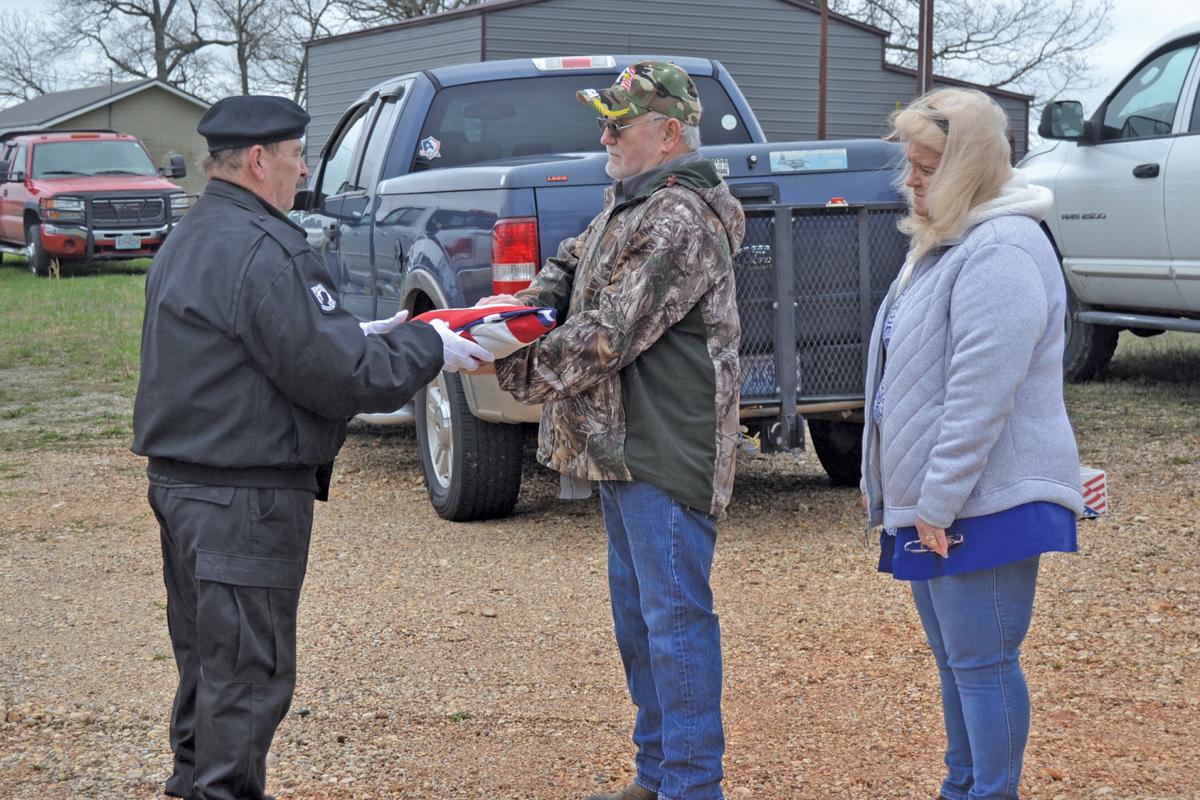 A member of the Vietnam Veterans of America presents Joe Stacy and his wife Brenda Stacey with an American Flag in honor of his late brother Vietnam Solider Gary Stacey who was killed in action on March 20, 1970. 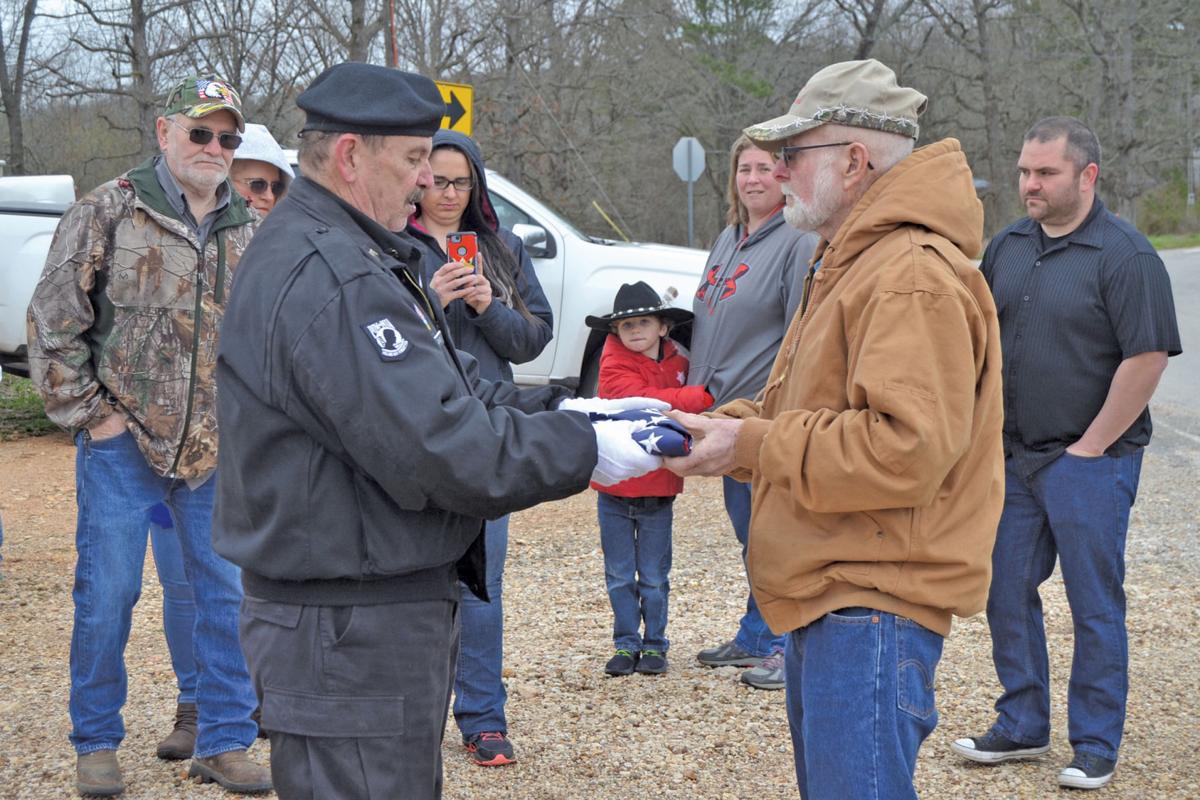 A member of the Vietnam Veterans of America presents Red Stacey, the brother of the late Gary Stacey, with an American flag that had flown above the United States Capital Building in Washington D.C. The flag was obtained by Western Taney County Commissioner Brandon Williams who coordinated with Congressman Billy Long’s office to have the flag donated for the ceremony.

A member of the Vietnam Veterans of America presents Joe Stacy and his wife Brenda Stacey with an American Flag in honor of his late brother Vietnam Solider Gary Stacey who was killed in action on March 20, 1970.

A member of the Vietnam Veterans of America presents Red Stacey, the brother of the late Gary Stacey, with an American flag that had flown above the United States Capital Building in Washington D.C. The flag was obtained by Western Taney County Commissioner Brandon Williams who coordinated with Congressman Billy Long’s office to have the flag donated for the ceremony.

On the 50th anniversary of his death, family, friends and community leaders all gathered together to honor the memory of Ridgedale resident Gary Stacey with a memorial highway dedication ceremony on March 20.

At the age of 20, Stacey was drafted into the Vietnam War in 1969. On March 20, 1970, he was killed in action in the province of Thua Thien, Vietnam. Now 50 years later, Stacey will be forever immortalized with two armed forces memorial highway dedication signs that have been placed at either end of Ridgedale Road.

“Gary was my brother. He enjoyed life. He was happy and always had a grin on his face. Always. Everybody knew him. Those that did know him, liked him or loved him,” said Joe Stacey. “He spent his life and grew up in Ridgedale, Missouri. He went to Hollister, Missouri School.”

Joe Stacey said the family has worked for several years to make this highway dedication a reality, but none of it would have been possible without the efforts of his wife Brenda.

“(Brenda) started on it, and it took her a while. I backed her up. I didn’t know what to do, but she’s smarter than me,” Joe Stacey said with a chuckle. “It was all her.”

Brenda Stacey said the difficult part of this project was that this was going to be the first memorial dedication of this kind done in Taney County.

“They had never had anybody in Taney County ask them to do this before,” said Brenda Stacey. “I thought of this three or four years ago, and I thought Ridgedale Road. They were born and raised there. I thought it would be an honor for his family to get this road dedicated in his honor.”

Those in attendance were joined by members of the Vietnam Veterans of America, who conducted a flag-folding presentation, a rifle volley and the playing of taps at the dedication ceremony. Following the unveiling of the signs, Joe Stacey shared that it’s an indescribable feeling to finally see the signs up and have the road dedicated in honor of his late brother.

“It brought back the day that we buried him. This is well worth it,” Joe Stacey said. “It was a long time in the making and I want everybody to know, everyday, every minute and every hour do not forget people like this. Don’t forget the ones that’s serving right now, because they’re sacrificing everyday.”

Joe Stacey added that the dedication also wouldn’t have been possible without the assistance of Taney County Assistant Highway Administrator Denzil Brown and Western Taney County Commissioner Brandon Williams who were both in attendance at the ceremony.

“I appreciate them all for coming. I can’t even describe how I feel. I just feel like I’ve been blessed with all the friends and family. But this isn’t for me, it’s for him and all those solider boys standing there,” said Joe Stacey as he pointed toward the members of the Vietnam Veterans of America. “It’s for all of them and I appreciate everything.”

Joe Stacey shared that all of his brothers medals and the American Flag they were presented at his funeral were all destroyed in a fire a few years following his brother’s death. While the family has been able to replace the medals over the years, they have never replaced the flag. After hearing this story, Commissioner Williams contacted the office of Congressman Billy Long who was able to obtain an American Flag that had flown at the United States Capital Building. Williams presented the flag to the Stacey family at the dedication ceremony.

“It’s something to be special and thankful for. That’s the way I look at it and that’s all I can say,” said Joe Stacey. “It’s been a special day. It has. It’s been a really special day.”

To learn more about the military career of Gary Stacey visit honorstates.org.