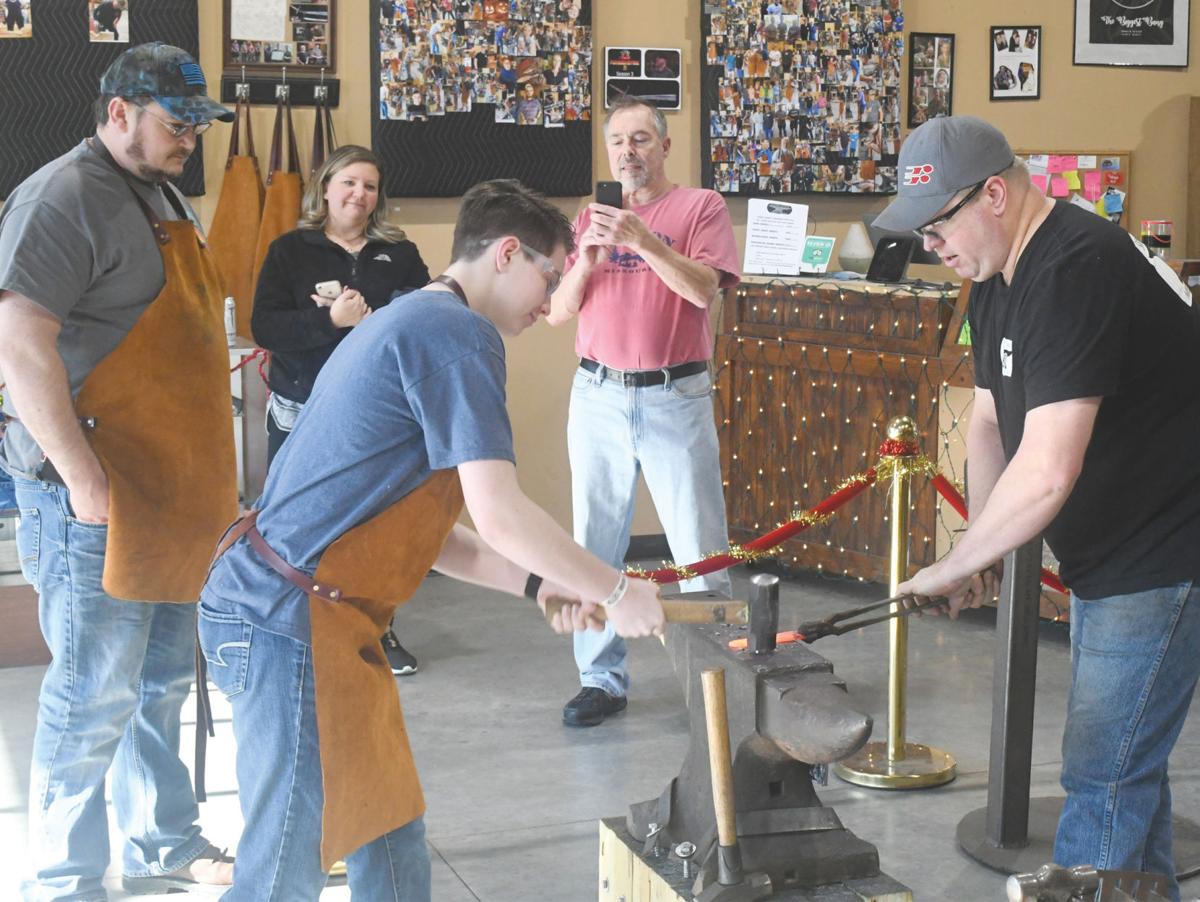 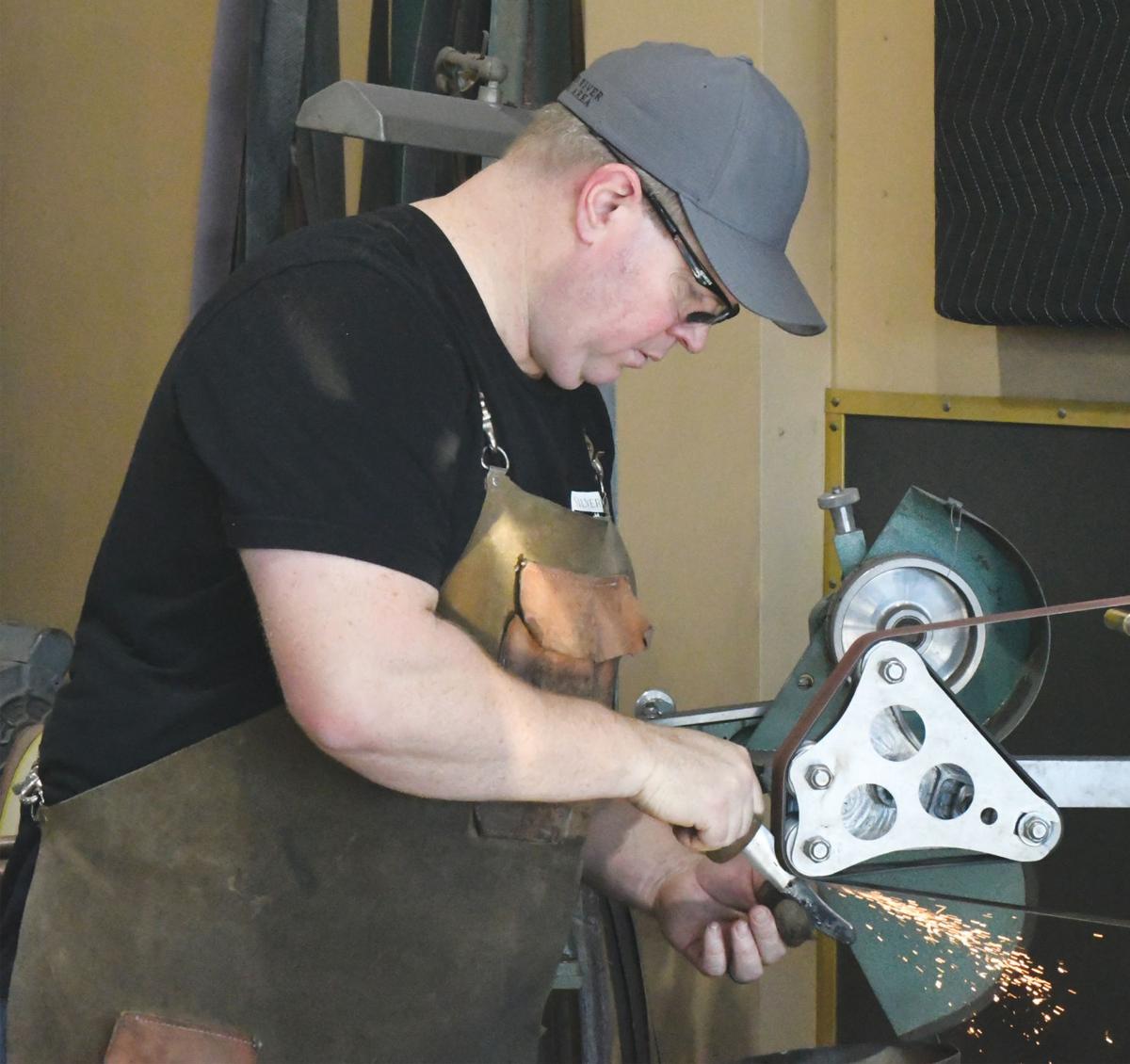 Jo Smith does some grinding on a knife at Silver Anvil Metal Craft at Branson Landing. 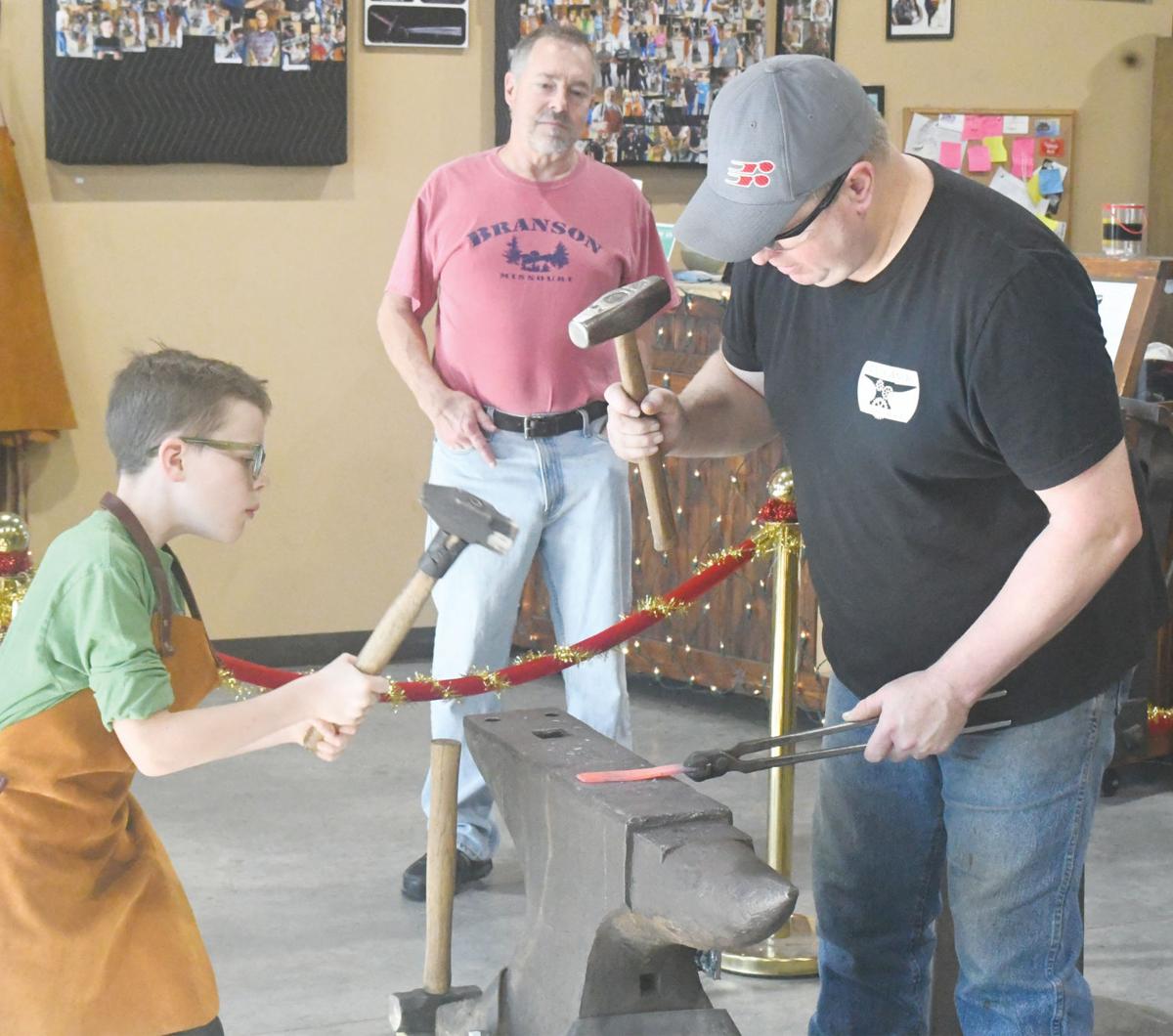 Nathan Biel, 10, get help making their own knives, thanks to Jo Smith at Silver Anvil Metal Craft at Branson Landing. 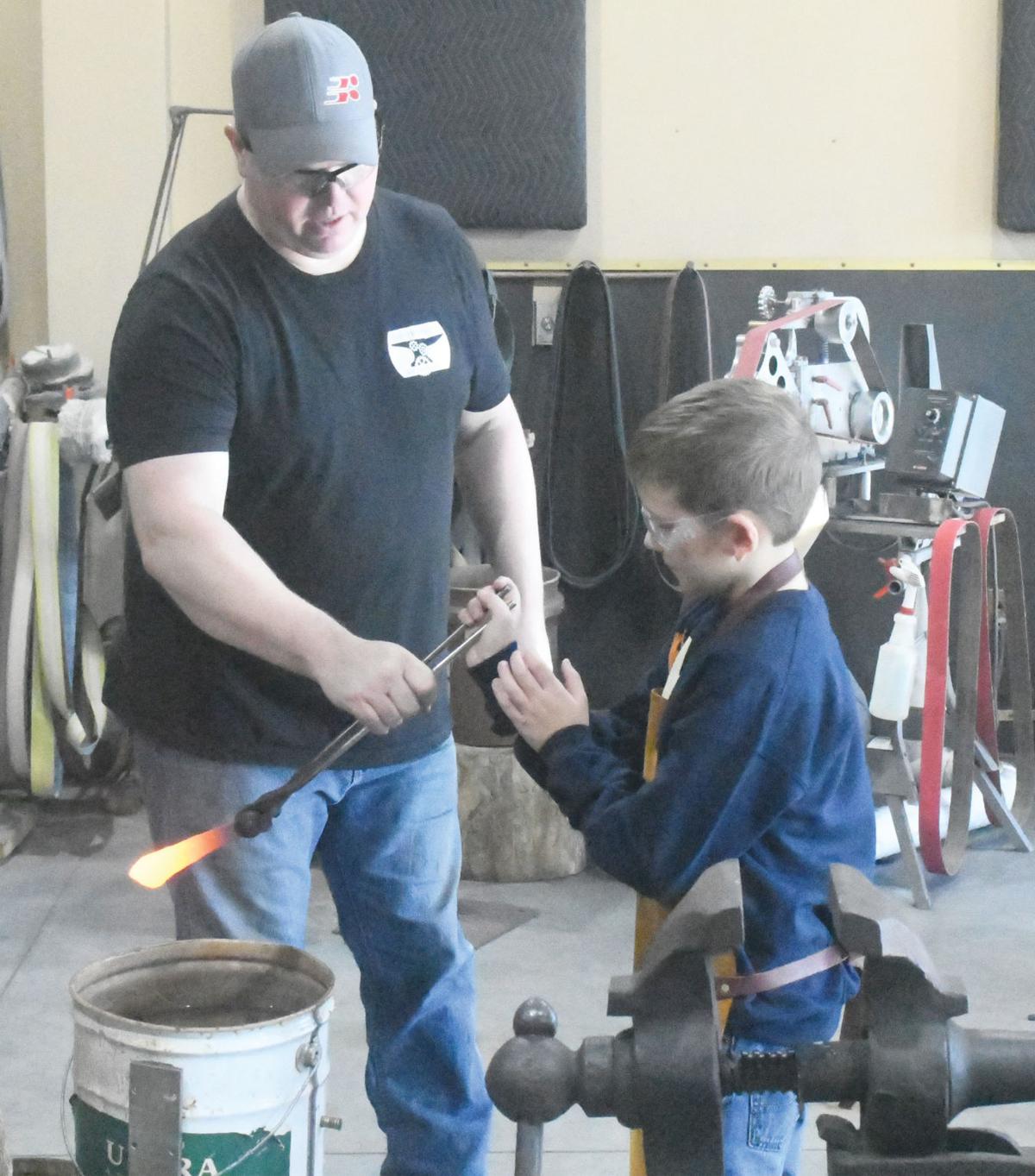 Owen Albert get help making their own knives, thanks to Jo Smith at Silver Anvil Metal Craft at Branson Landing.

Jo Smith does some grinding on a knife at Silver Anvil Metal Craft at Branson Landing.

Nathan Biel, 10, get help making their own knives, thanks to Jo Smith at Silver Anvil Metal Craft at Branson Landing.

Owen Albert get help making their own knives, thanks to Jo Smith at Silver Anvil Metal Craft at Branson Landing.

Earlier this year, bladesmith Jo Smith and his family opened the Silver Anvil Metal Craft store at Branson Landing. In addition to custom and restoration work, as well as sharpening services, Smith and the Silver Anvil crew also allow regular folks to forge their own blade.

“We wanted to have a shop where we could help people learn,” Smith said. “I’m big into teaching, I love to teach and I love to help people experience things.”

Folks wanting a unique vacation experience can choose between a pony show knife, horseshoe knife, or a railroad spike knife. Would-be forgers ages 8 and under may choose to forge a nail knife.

“We provide the hammer, heat and material, and they provide the muscle,” Smith said. “I handle the metal going in and out of the forge, as well as grinding and sharpening, and in about an hour, the folks get to leave with a completed souvenir they played a big part in making, in a leather sheath.”

Smith is a native of Oklahoma, and a “proud member of the Cherokee Nation.” He grew up in and around the hunting and taxidermy industry thanks to his father, Steve Smith. From the time Jo was 8, his father taught him how to sharpen, use and respect a knife. As he grew up, Smith pursued and attained a degree as a Mechanical Engineer, all while keeping his passion for knives and Blade-smithing.

“I’ve been a mechanical engineer for almost 20 years, but I’ve been bladesmithing for about 16 years,” Smith said. “I grew up in a taxidermy shop, so knowing what a knife is supposed to do, and how it’s supposed to feel, is something I’ve known almost my whole life.”

A few years ago, Smith found himself front and center on two of the History Channel’s most popular shows, “Forged in Fire” and “Forged in Fire: Knife or Death.” According to Smith, his “big mouth,” as well as his wife Chandee, were responsible for his television appearances.

“My wife actually put me in the mix on that one,” he said with a laugh. “We were sitting at home one night watching ‘Forged in Fire,’ and I was screaming at the TV saying ‘Why are you doing that? That’s stupid, don’t do that.’ So she said ‘alright big boy, you need to put up or shut up.’

“She said I needed to put my name in the pot, and I told her ‘Nah, I’m good (laughs).’ She told me I couldn’t watch the show unless I put my name out there, so I agreed and even got a little cocky. I thought ‘yeah, there’s no way their going to call me, it ain’t never gonna happen.’ Sure enough, they called me, and it got crazy from then on.”

According to Smith, he participated in several interviews, including via Skype, and even had to submit some of his work for closer inspection. After “about three months,” Smith got a phone call confirming his trip to film an episode of “Forged in Fire.”

During Smith’s filming, he and three other smiths had to salvage steel from a junkyard to create a signature blade using a hand-cranked coal forge. Smith and fellow contestant Pete Winkler made it through to the finals, where they had five days to create a Dayak war sword, the Pandat.

Smith fell short, and Winkler took home to title of Forged in Fire Champion. As far as his appearance on “Knife or Death,” he said the producers just called him.

“They knew my background in Bladesport, and knew what all I had done,” he said. “So they called me, and explained the show was kind of like ‘Fruit Ninja’ on steroids, which sounded cool, so I told them sure.”

Looking to rebound from his “Forged” loss, Smith took home the top spot on “Knife or Death” in the show’s debut episode.

According to Smith, being introduced by former WCW and WWE champion Bill Goldberg as “Big Bad Jo from Jenks, Oklahoma,” “ranked right up there in the highlights of life with becoming PawPaw to my two granddaughters.”

In addition to the new business, Jo and Chandee Smith are among very few Bladesports competitors who compete with fully forged blades. In fact, even though Chandee was the only female who competes with a forged blade, she placed second in the 2018 Nationals.

As far as getting in at Silver Anvil Metal Craft, Smith said it’s easiest to make an appointment.

“We set up appointments through our Facebook page, but we also take walk-ins, too,” Smith said. “I can take care of four people at a time at the  forge, so if you decide to walk in, and don’t mind waiting a bit, we can squeeze you in.”

Even though Silver Anvil has only been open for seven months, Smith said he is excited about what 2020 holds.

“Since May, we’ve done almost 1,300 forging experiences,” Smith said. “What’s crazy, is I have a friend who does that many in just a couple of months at his place in Pigeon Forge. Our goal is to get to those numbers, but for our first year open, we’re excited and thankful for the direction we’re headed. We moved to Branson because we knew this business model would not survive in Tulsa. If you don’t have that tourism industry and fresh faces all the time, this model just won’t work. My grandfather owned the largest furniture store in northwest Arkansas for 35 years, and my dad owns his own business, and has as far back as I can remember. I learned a long time ago giving great service at a great price, networking and getting to know people in the community, and being a little entertaining while you’re doing it gets you a long way.