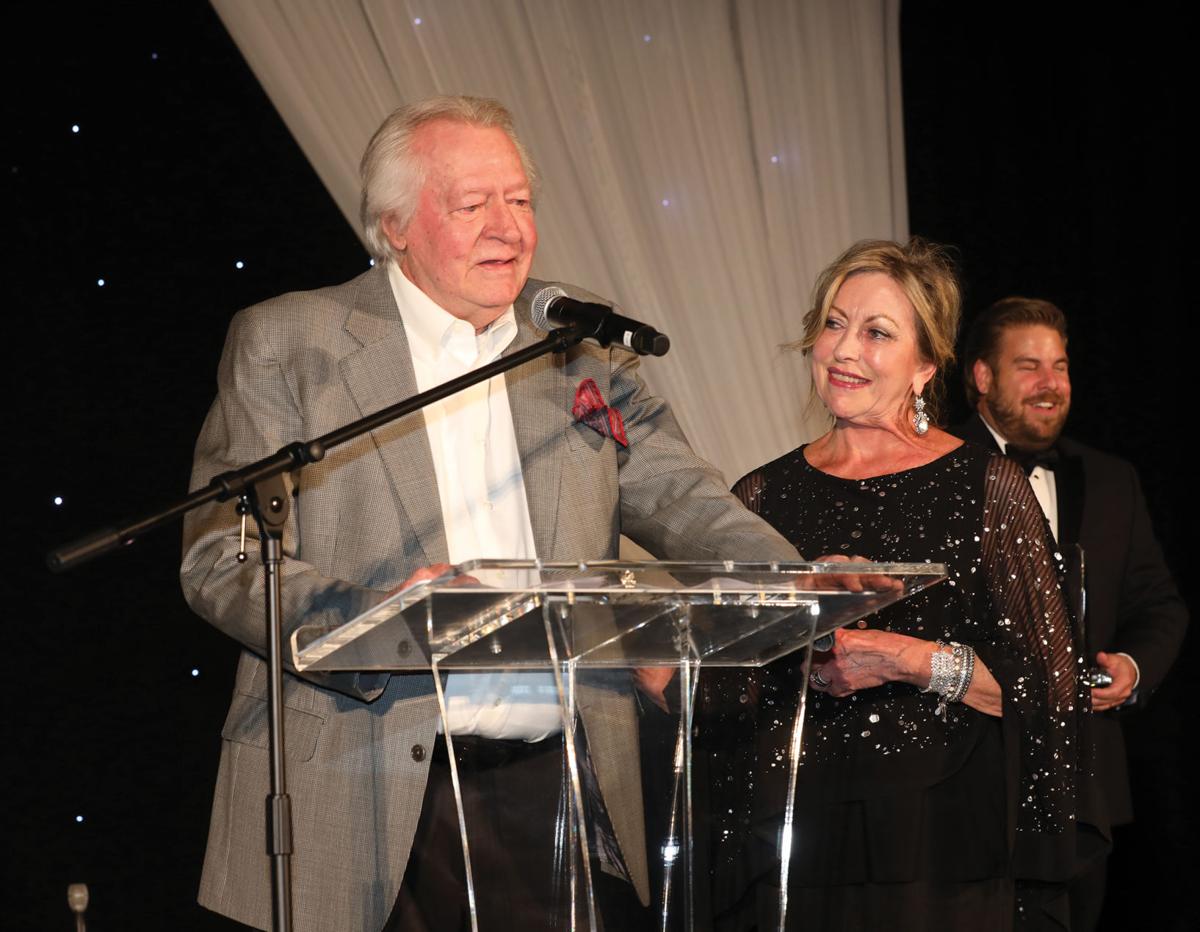 Doug and Carol Fuller accept the Ambassador Award at the Branson/Lakes Area Chamber of Commerce Black Tie Gala, held Friday at Chateau on the Lake. 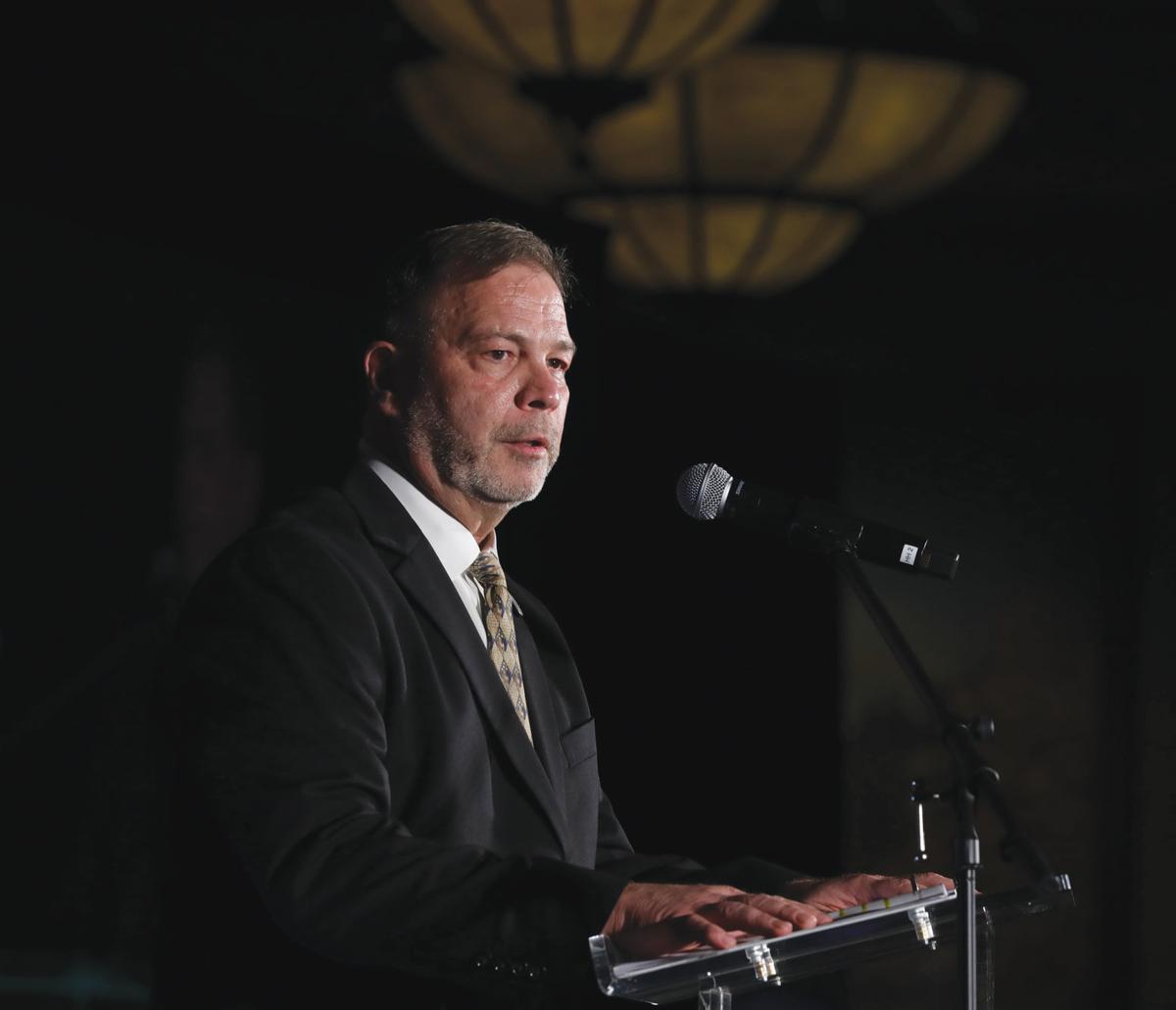 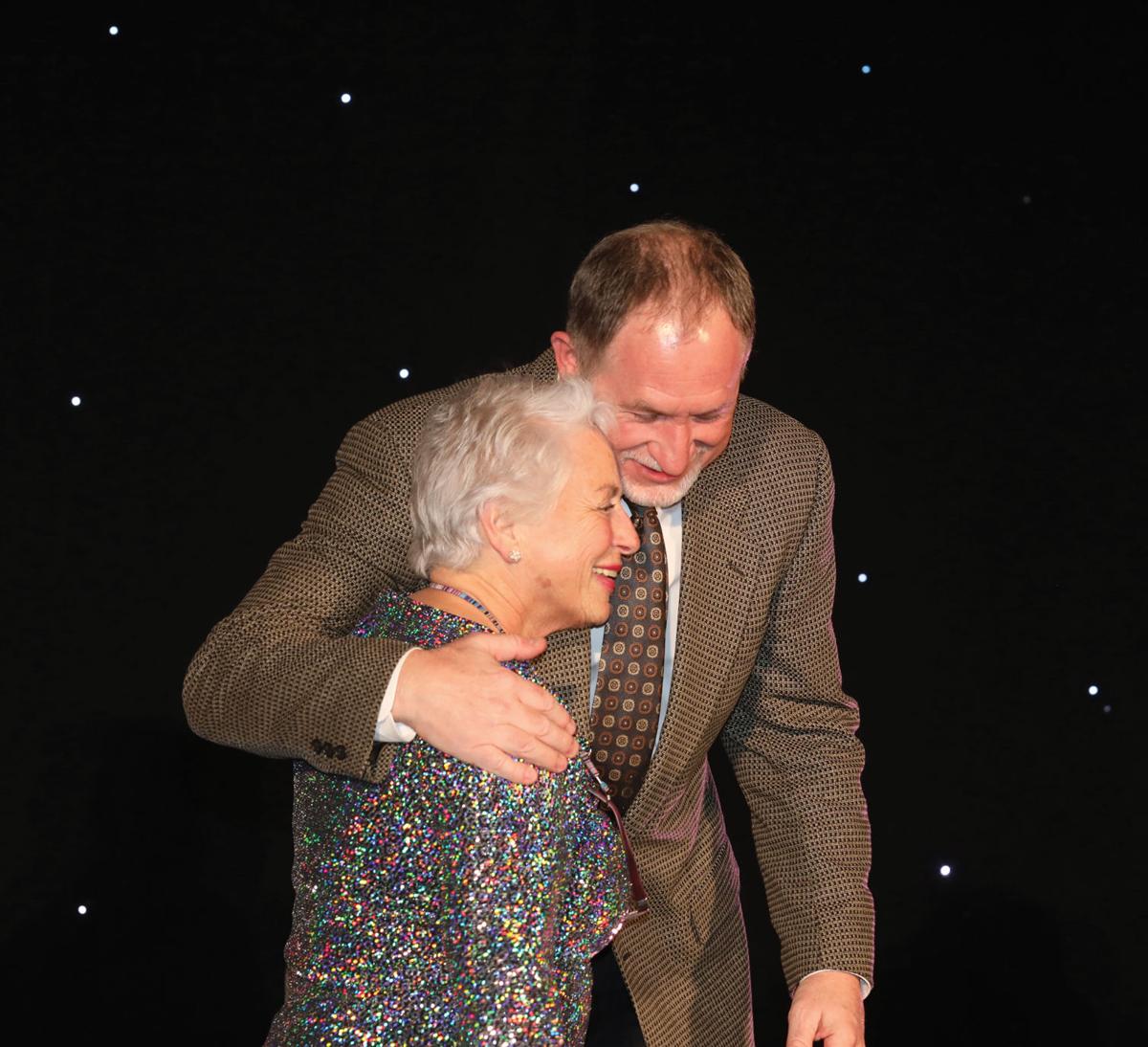 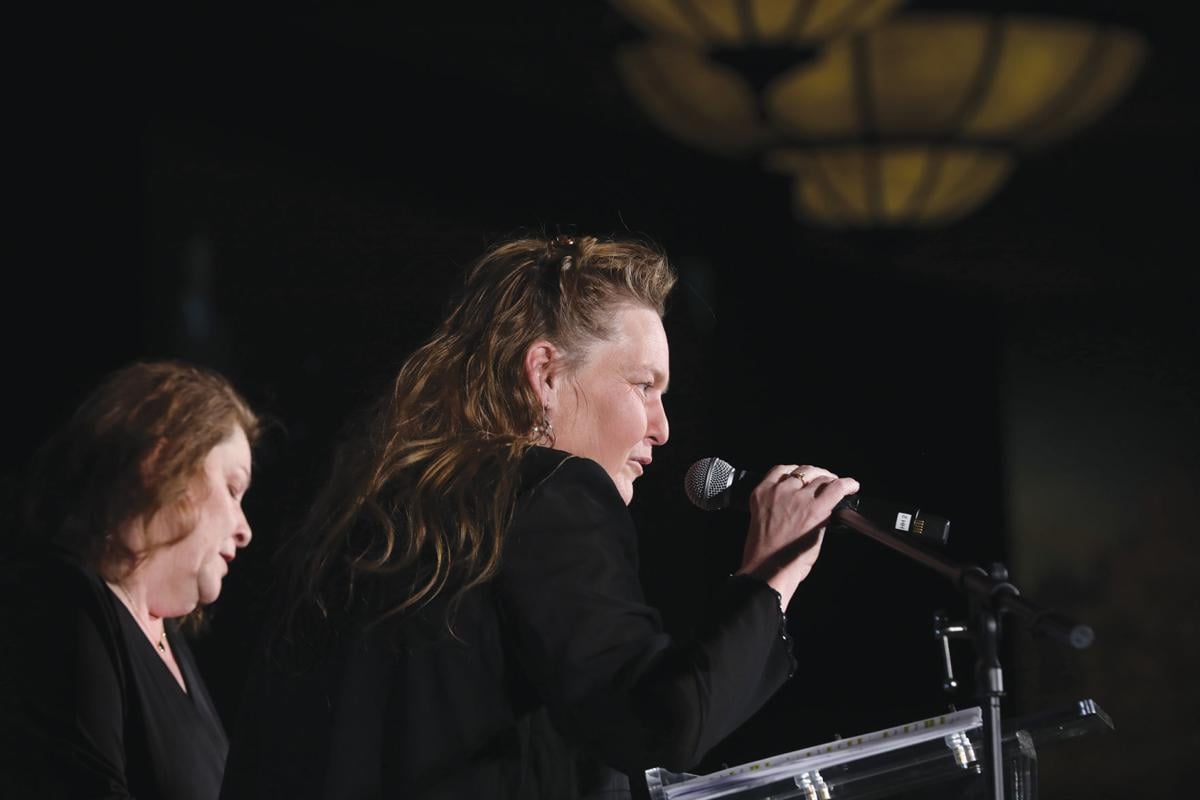 K.D. Michaels says a few words after accepting the Beautification Award, along with Lori Houle, on behalf of The Good Shepherd Inn. 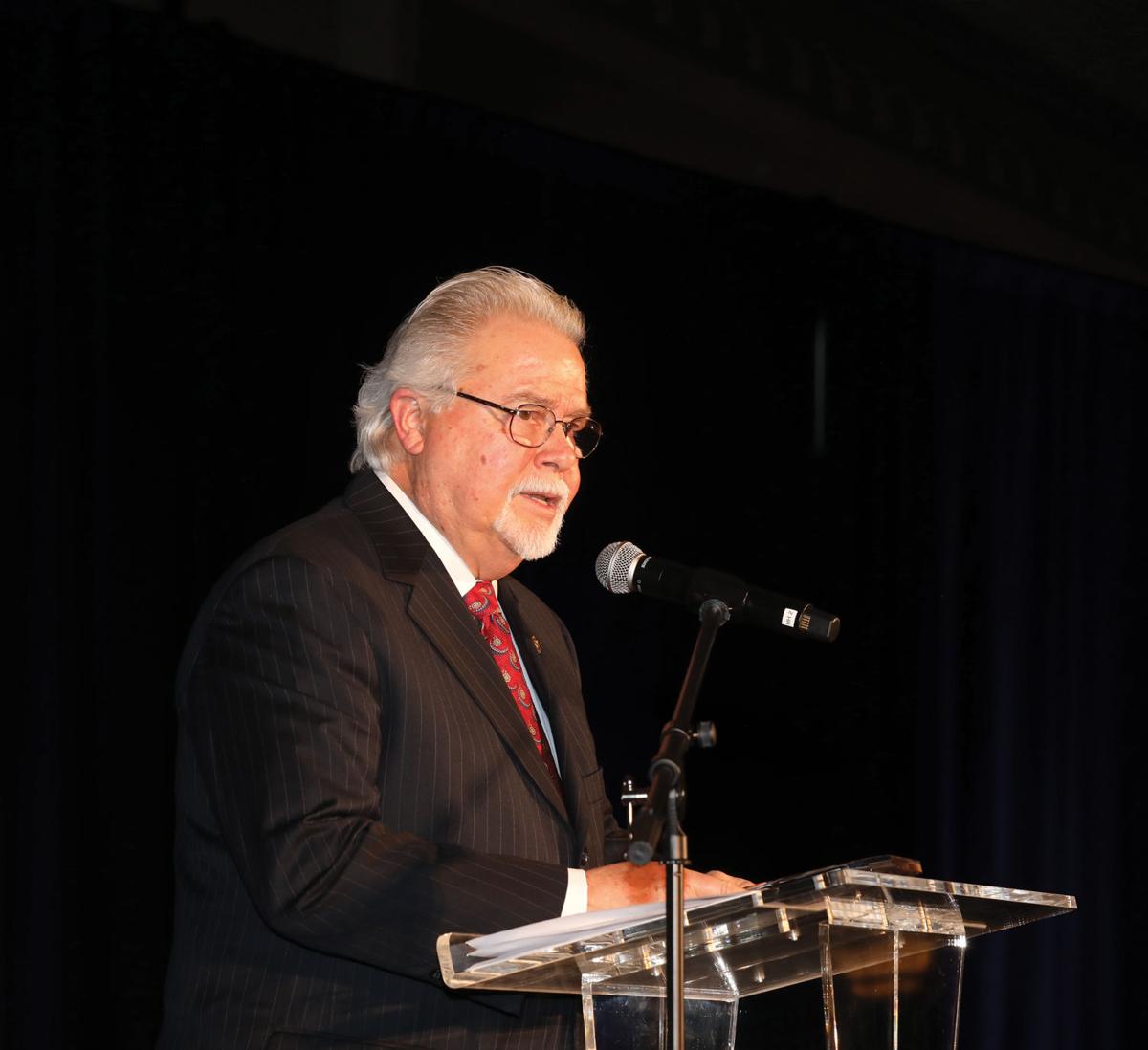 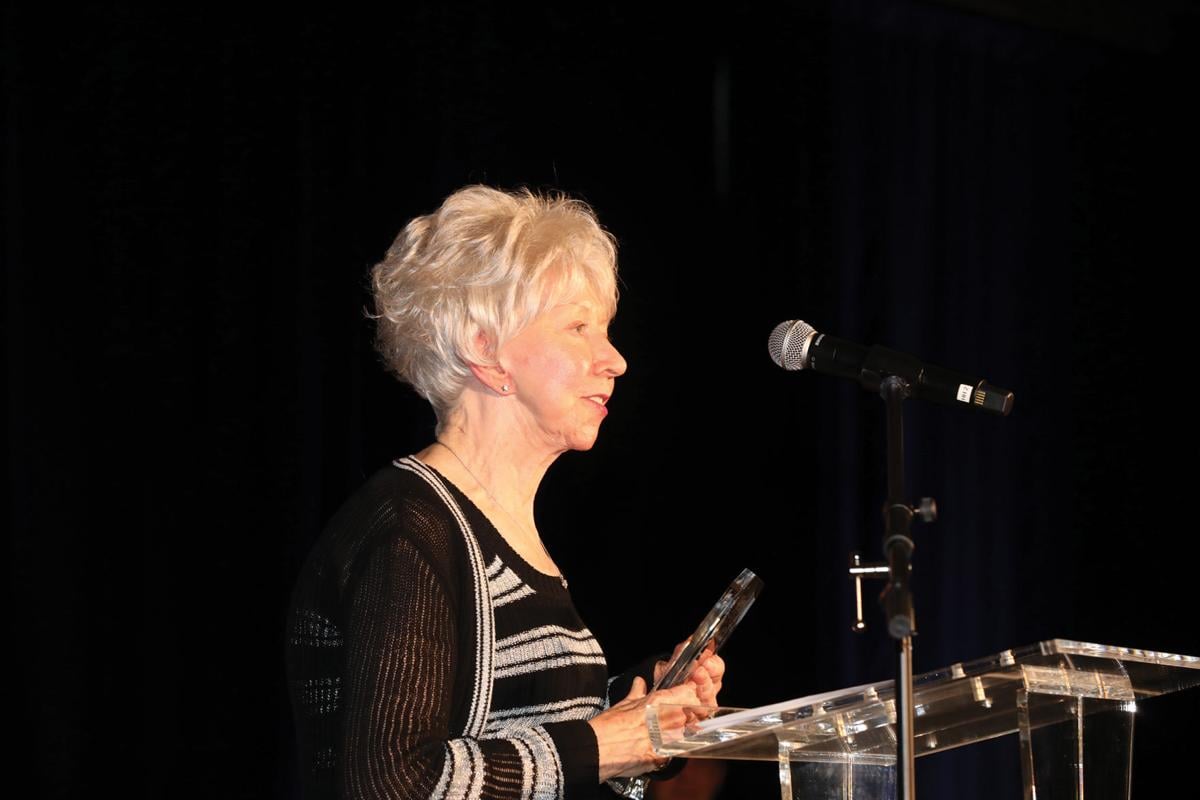 Doug and Carol Fuller accept the Ambassador Award at the Branson/Lakes Area Chamber of Commerce Black Tie Gala, held Friday at Chateau on the Lake.

K.D. Michaels says a few words after accepting the Beautification Award, along with Lori Houle, on behalf of The Good Shepherd Inn.

The Branson/Lakes Area Chamber of Commerce honored an array of individuals Friday who have made a lasting impact on the Branson area.

At its annual Black Tie Gala, held this year at the Chateau on the Lake, chamber officials presented six community awards. Each award was accompanied by a video, explaining the recipient’s contribution to the area.

“He understands these kids because he was one of them,” Combs said. “There is not another person in the Ozarks more qualified to receive the Care for Kids Award.”

Combs said the children love to be around Hays.

“(Hays) is more concerned about kids than anyone I’ve ever known. He came to Branson with a smile on his face, and has done a fantastic job for these young kids.”

In accepting the award, Hays said the club saved his live.

“I’ve spent my entire 30-year career trying to give back to the organization,” Hays said.

The Care for Kids Award was sponsored by the Silver Dollar City Foundation.

The Beautification Award went to The Good Shepherd Inn.

In the video, Branson Alderman Bill Skains said the hotel has been transformed from a monthly-rental facility.

“This thing has turned into a bona fide hotel,” Skains said. “They have totally reworked it inside and out. New TVs, new beds, totally different paint job, a significant amount of investment into that facility there, and it impressed me a lot.”

Skains said this hotel, and a few other properties in the area, are helping revitalize a portion of the city that is often the first impression for those arriving in town.

Lori Houle and K.D. Michaels accepted the award on behalf of the Good Shepherd Inn.

I want to thank you very much for this honor,” Houle said. “Come see us.”

The Community Spirit Award was presented to Roxanne Amundsen.

In the video, Darren Myers said Amundsen has a desire to serve the community, and is a member of several chambers and organizations.

“She is a connector,” Myers said. “That is her strength. She loves to meet needs by connecting you with the people you need to know. I think her favorite phrase is ‘you need to meet,’ and then she puts the person’s name in there.”

Her husband, to whom she had been married 54 years, died just a few months ago.

“It’s God’s grace and (Amundsen’s) character and faith that brought her through that,” Myers said. “She really believes in the culture that is present here and wants to maximize that.”

In accepting her award, Amundsen, who moved to Branson with her husband Glen 42 years ago, said Branson is her home.

“I can’t say enough about how this community has lifted me up in this recent loss in my life. Thank you very much, and I will continue always to support Branson.

The Community Spirit Award was sponsored by Myer Hotels.

The Ambassador Award was presented to Doug and Carol Fuller.

In the video, Mona Stafford (who won the Community Spirit Award last year) said the Fullers, who own and produce Branson Travelhost magazine, are “Branson’s biggest cheerleaders.”

“Any time you go to an opening, a grand opening, any kind of ribbon-cutting, they will be there,” Stafford said. “They love Branson, and this love affair has gone on for over 27 years.”

When accepting the award, Doug Fuller said it doesn’t take much to be an ambassador for Branson.

“It’s so easy to be an ambassador for this place,” Doug Fuller said. “So much to work with, so many good people. So many people of faith, family.”

He also thanked the support of his wife Carol, who said she was shocked by the award.

“We love our home, Branson,” Carol Fuller said. “We love all you people.

“We look around at all these faces, and we are so blessed, Thank you so much for this wonderful honor.”

The Pioneer Award was presented to Cy Murray.

In the video, Chris Hammond said Murray – who is retired from White River Valley Electric Cooperative – was good at lobbying for the community by sitting down with others to help find solutions.

“(Murray) has brought in several 100 jobs into Ozark Mountain Country. Some of the other things this recipient has done is started two environmental companies that have protected our waters and … a lot of people for years to come.”

In accepting the award, Murray said Hammond deserved the award more than he. He also thanked the White River board and staff, and he thanked Silver Dollar City for its 60 years of business.

The final award of the evening was the Mary Award, which was presented to June Ward, who has worked 50 years as a candy maker at Silver Dollar City.

Silver Dollar City President Brad Thomas said “She loves individuals from the smallest of children to the most senior of adults and everyone in between. She genuinely cares about other people, and it shows.”

Silver Dollar City spokesperson Lisa Rau said “She’s encouraging, she’s creative, and she’s really funny, and that’s all rolled up into this one beautiful person who’s absolutely made a difference.”

Silver Dollar City co-founder Pete Herschend said “She has taught people to care for the person in front of them, whether that person is a customer or a banker or somebody who has just started to work. She taught them to care.” He also said “Here is a person who has worked for more than 50 years, touched the lives of, not hundreds, but thousands of men and women that she has worked with. You bet she’s had an impact.”

In accepting the award, Ward said she was especially honored because she knew both Marys the award is named after: Mary Trimble and Mary Herschend.

“I’ve often thought about those ladies, that many years ago, working in a man’s world, and I think they were so successful and so intelligent, and I’m so proud and so honored to receive this,” Ward said.

The Mary Award was sponsored by Robert Cirtin Investigations.

In other business, the Branson Christmas Coalition presented its annual Leadership Award to Silver Dollar City in honor of the park’s new 80-foot-tall LED Christmas tree.

“On behalf of the citizens of Silver Dollar City who care about Branson, who love Christmas, and who make sure everyone of those 6.5 million lights are hung straight and all of those Christmas shows are performed with heart and soul, thank you very much,” Thomas said.

The chamber also acknowledged the 60th anniversary of Silver Dollar City and the presented the company with a lantern full of notes – written by those in attendance – with memories and congratulations.

“We hope you enjoy all of these memories as we enjoy all of them to come with our families, friends and guests over the next 60 years,” said Chamber President and CEO Jeff Seifried.