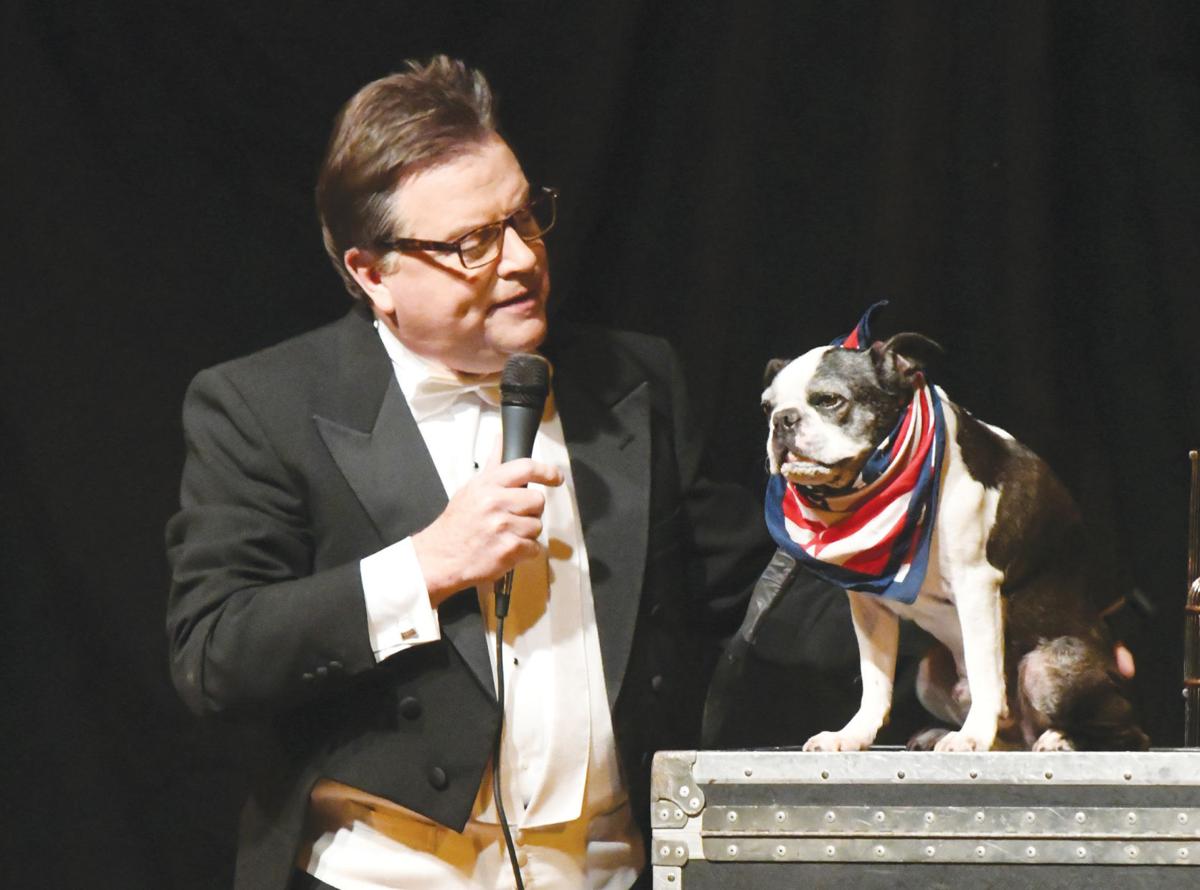 Todd Oliver and one of his “Friends” Irving headline “Todd Oliver and Friends” at the Shepherd of the Hills Historic Homestead & Adventure Park’s Playhouse Theatre. 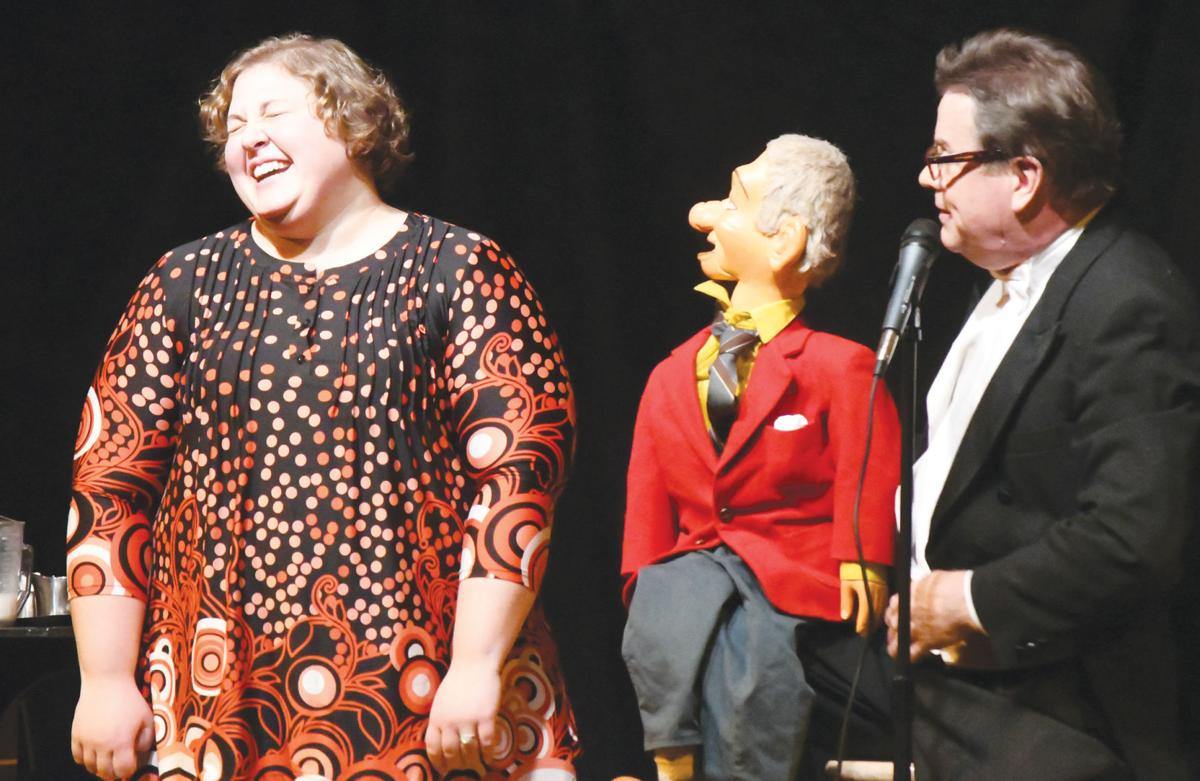 Amanda Quinn, left, gets tickled as “Pops,” middle, and Todd Oliver have fun during “Todd Oliver and Friends” at the Shepherd of the Hills’ Playhouse Theatre. 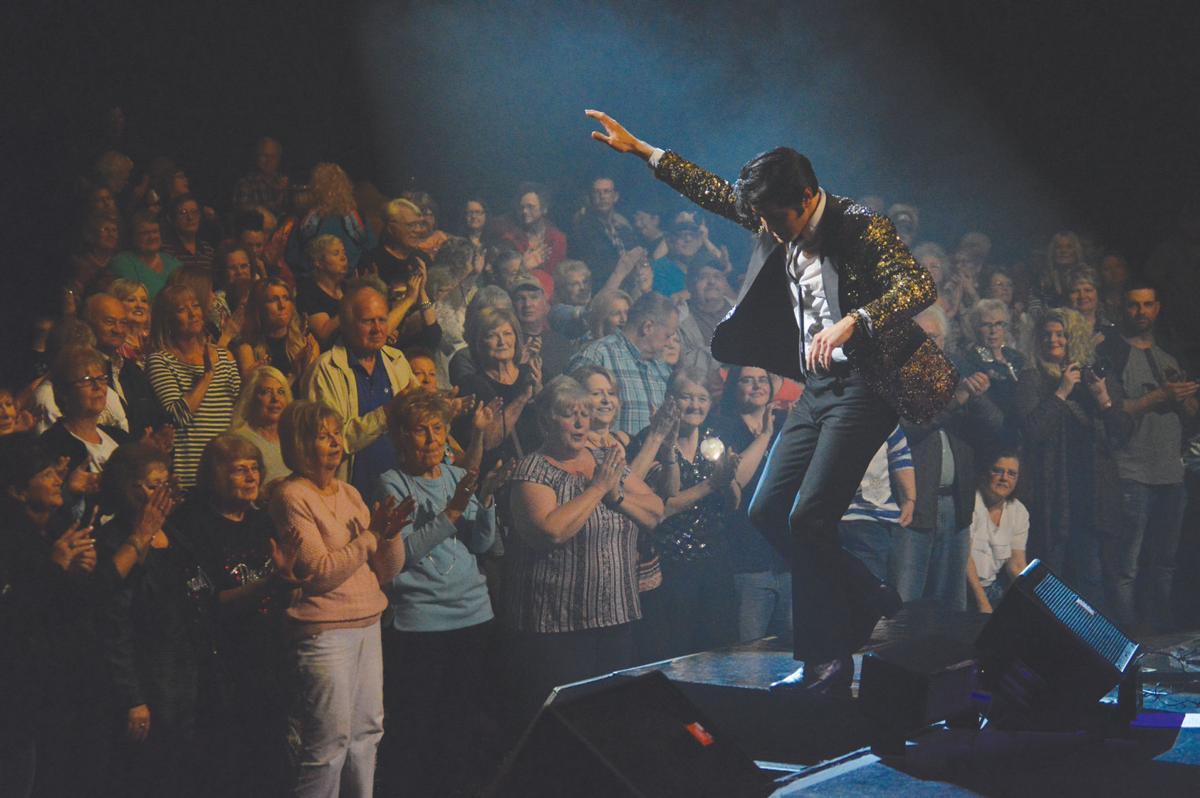 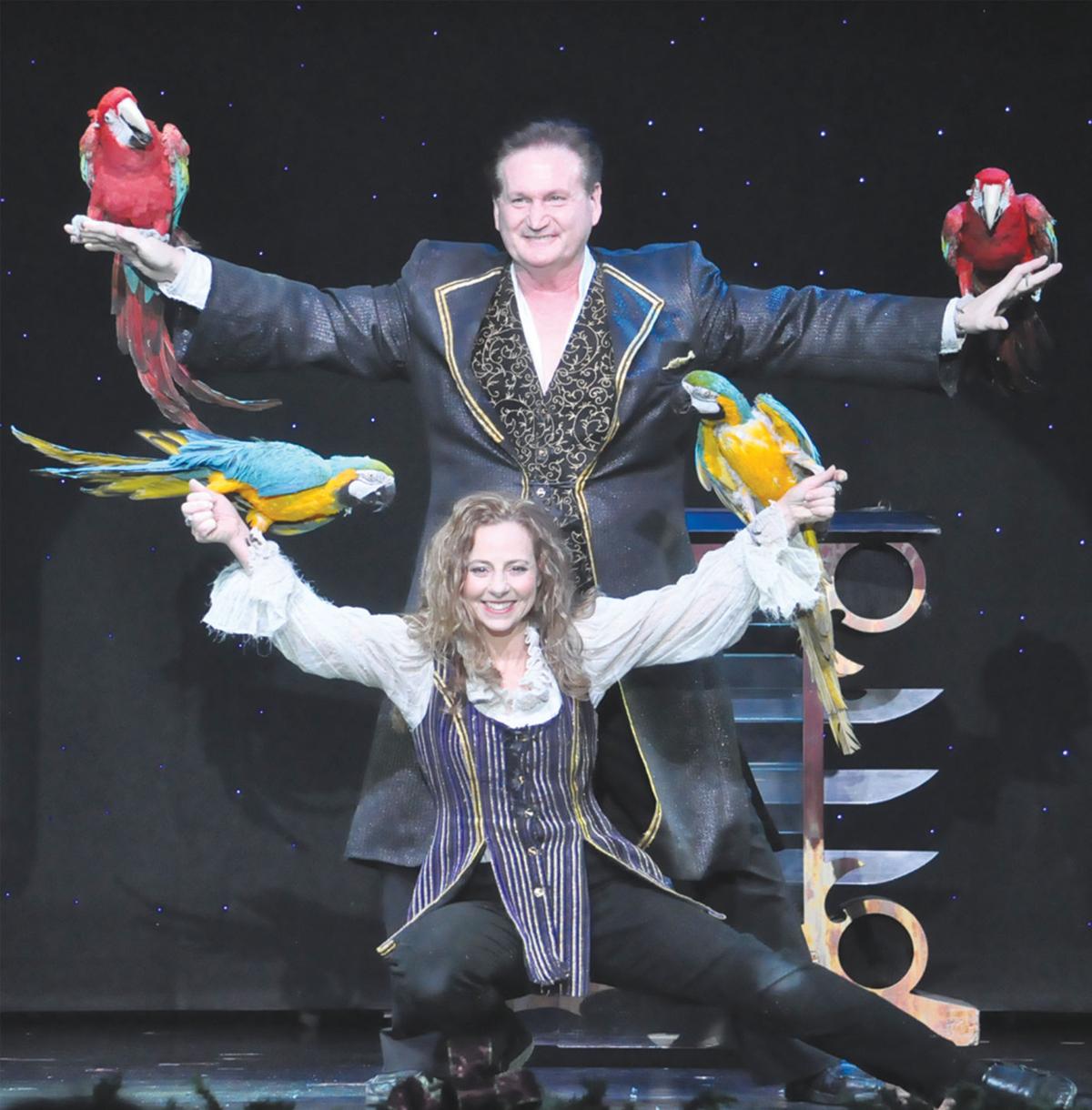 The “Hamners Unbelievable Variety Show” is one of dozens featuring performances on Thanksgiving.

Todd Oliver and one of his “Friends” Irving headline “Todd Oliver and Friends” at the Shepherd of the Hills Historic Homestead & Adventure Park’s Playhouse Theatre.

Amanda Quinn, left, gets tickled as “Pops,” middle, and Todd Oliver have fun during “Todd Oliver and Friends” at the Shepherd of the Hills’ Playhouse Theatre.

The “Hamners Unbelievable Variety Show” is one of dozens featuring performances on Thanksgiving.

Fun times with Todd Oliver and his friends at Shepherd

Earlier this week I visited the Shepherd of the Hills Historic Homestead & Adventure Park’s Playhouse Theatre to catch “Todd Oliver and Friends.”

The show features renowned ventriloquist and comedian Todd Oliver, who spent many years performing aboard the Showboat Branson Belle. On a national level, Oliver has also been featured on “The Late Show with David Letterman,” “The Late Late Show with Craig Ferguson,” “The Today Show,” and even “America’s Got Talent,” where he snagged a Top 4 finish, being eliminated in the semifinals of Season 7.

During the show at the Shepherd of the Hill’s Playhouse Theatre, Oliver is joined on stage by his famous canine Irving, as well as other popular characters including Joey, Pops, and the great Miss Lilly. In addition to ventriloquism fun, Oliver also sings, play a little piano, and even does some magic tricks.

The show was quite funny, and Oliver pulls off the “one man show” perfectly, even if he does get a little help from Irving, who most assuredly steals the show.

Oliver features both noon and 5 p.m. shows, with dinner served an hour before showtime, with select shows through Dec. 30.

In addition to “Todd Oliver and Friends,” the Shepherd of the Hills Historic Homestead & Adventure Park has also been transformed into a winter wonderland with more shows, attractions and fun, as well as the annual Trail of Lights, Branson‘s original, longest running drive-through light display at more than 30 years, that still garners lots of attention.

The Trail of Lights, which features “millions of multi-colored Christmas lights, and themed and animated displays,”  will follow its traditional course, winding through The Shepherd of the Hills 160-acre historic property, featuring many of the classic Christmas scenes from the past.

The Shepherd of the Hills is also home to the North Pole Adventure,   the “Tree Top Lot-A-Maze-ing Fun,” “Jingle Junction,” and Inspiration Tower. Other live entertainment options for the holiday season include “A Shepherd’s Christmas Carol,” as well as Dino and Cheryl Kartsonakis are hosting “Christmas with Dino.” Both shows come with a meal.

Friday, Nov. 29, the folks at Dick Clark’s American Bandstand Theater are hosting Dean Z, one of the best entertainers in Branson, as he unveils his new “Dean Z’s Rockin Christmas Show.”

Dean Z, an ward-winning and internationally acclaimed entertainer, spent more than a decade as the “resident Elvis” at the “Legends in Concert” show.

As I said, Dean Z is one of my favorite entertainers, and he has never once failed to entertain and enthrall, especially when he’s performing a show that he wrote, directed, produced and arranged.

It’s sure to be a rockin good time.

Local entertainer Randy Plummer has announced the annual production of “Snowdeer Christmas Story,” his original production based on his book and CD of the same name, will be back in Branson this year at the World’s Largest Toy Museum.

Johnny Mathis wraps at the Mansion

One of America’s coolest crooners will perform at the Mansion Theatre Saturday night as Johnny Mathis takes the stage.

Mathis is best known for massive hits including “Wonderful, Wonderful,” “It’s Not For Me To Say,” “Chances Are” and “Misty.”

“Johnny Mathis’ Greatest Hits,” which is cited as the first “Greatest Hits” album ever released, went on to become one of the most popular albums of all time and spent an unprecedented 490 continuous weeks on the Billboard Top Albums Chart. He continued to have chart success for many years. According to record historian Joel Whitburn, Mathis was one of only five recording artists to have Top 40 Hits spanning each of his first four decades as a recording artist.

Over the past 50 years, Mathis has sold more than 350 million records worldwide, and is responsible for 73 charted tunes.

Mathis is set to take the stage at 8 p.m. Friday and Saturday night.

Billy Yates’ Choices Concert Hall is featuring a double-header Saturday night with the band Ricochet taking the stage at 7:30 p.m. followed by the Record Store Troubadours at 9:30 p.m. for some “dancin’ in Branson.”

Ricochet is best known for hits including “What Do I Know,” “Daddy’s Money,” “Love Is Stronger Than Pride,” “He Left a Lot To Be Desired,” and “Ease My Troubled Mind.”

Once the Ricochet concert is in the books, Choices opens its doors for the Record Store Troubadours, fronted by the husband and wife team of Eric and Lindsey Heatherly.

“We’re a rockin’ little four-piece,” Eric Heatherly said with a smile. “It’s tight, it’s compact, and there’s a lot of sound coming from the stage.”

As far as what they’re doing every weekend at Choices, the Heatherlys said they play only the best in classic country and rockabilly music, perfect for dancing.

“We rock until about midnight, and we’ve been having a great time out there watching people dance,” Eric Heatherly said.

In addition to live music, Billy Yates’ Choices Concert Hall features a full bar and menu, as well as the largest dance floor in Branson.

The Ricochet concert is a ticketed event, while the Record Store Troubadours after event is free and open to the public.

The second “Ozark Community Christmas” show at the Mansion Theatre is set for Dec. 10 at 7 p.m.

This free show, which doubles as a fundraiser for Christian Action Ministries, CAM, will feature performances from Six, the Blackwoods, the Johnson Strings, Gary McSpadden, Larry Delawder as “Barney,” and a choir featuring 100 voices.

“Ozark Community Christmas” was birthed from a vision of Larry Wilhite and a conversation that he had with Pastor Gary McSpadden who shared a similar desire to see events that bring the community together. The goal of OCC is to provide a free event for the community of the Ozark region to celebrate Christmas together and to help others in the community.

During last year’s food drive, representatives from CAM had to make three trips to carry the 4505 lbs of food donated, in addition to $1,359 in donations.

Thanksgiving Day is Thursday, and there is no shortage of things to see and do on the dozens of stages located in Branson.

Things get rolling at 10 a.m. with James Garrett taking the stage for his “Tribute to John Denver” show at the Little Opry Theatre, the “Amazing Acrobats of Shanghai” at the Mickey Gilley Grand Shanghai Theatre, “Leroy New’s A Tribute to Marty Robbins and Classic Country Stars” at the Dutton Family Theatre, and “The Hughes Brothers Christmas Show” at the Hughes Brothers Theatre.

The “Amazing Acrobats of Shanghai” also have an 8 p.m. show.

At 11:15 a.m., lunch is served at the Shepherd of the Hills Historic Homestead & Adventure Park for “Christmas with Dino and Cheryl,” with the show kicking off at noon.

The Showboat Branson Belle will depart at noon for its first cruise of the day. Other show and dinner cruises are set for 4 and 8 p.m.

The “Christmas Wonderland” show at the King’s Castle Theatre takes the stage for its first show at 2 p.m., followed by another show at 8 p.m.

“A Janice Martin Cirque Show” also kicks off at 2 p.m. at the Americana Theatre, as does “Marvin Gaye and Friends” at the Hot Hits Theatre.

Shows set for 3 p.m. Thanksgiving day include “Amazing Pets” at Grand Country, “Acrobats on Ice” at the White House Theatre and “Legends in Concert” at Dick Clark’s American Bandstand Theater.

Diner is served for “A Shepherd’s Christmas Carol Show” at 4:15 p.m., followed by a 5 p.m. showtime at the Shepherd of the Hills Historic Homestead & Adventure Park.

The Hamner Variety Theatre will see “Abba — Thank You For The Music” take the stage at 5 p.m. Also set for a 5 p.m. time slot is “George Strait Country” at the Little Opry Theatre, and “All Crazy ‘Bout Patsy” at the Hot Hits Theatre.

Jecobie Roberts’ “Comedy Hypnosis Dinner Show” kicks off at the Majestic at 6:30 p.m.

The Yakov Smirnoff Theatre will host “Comedy Hypnosis with Austin Singley” at 7 p.m., as well as a “late night” show at 10:30 p.m.

At 7:30 p.m., “Grand Jubilee” at Grand Country, “The Haygoods” at the Clay Cooper Theatre, “Motown Downtown” at the Hot Hits Theatre, “Nashville Nights” at Billy Yates’ Choices Concert Hall and “Raiding the Country Vault” at the Americana Theatre will all take their respective stages.

Several other shows are set for 8 p.m., including “The Duttons” at the Dutton Family Theatre, “Hamners’ Unbelievable Variety Show” at the Hamner Variety Theatre, “Pierce Arrow Gold” at the Pierce Arrow Theatre, “Reza: Edge of Illusion” at the Branson Famous Theatre, the “Sanders Family Christmas” show at the Little Opry Theatre, and “Million Dollar Quartet” at the Welk Resort Theatre.

For more on all these shows, grab a copy of Wednesday issue of the Branson Tri-Lakes News, as well as Branson This Week.