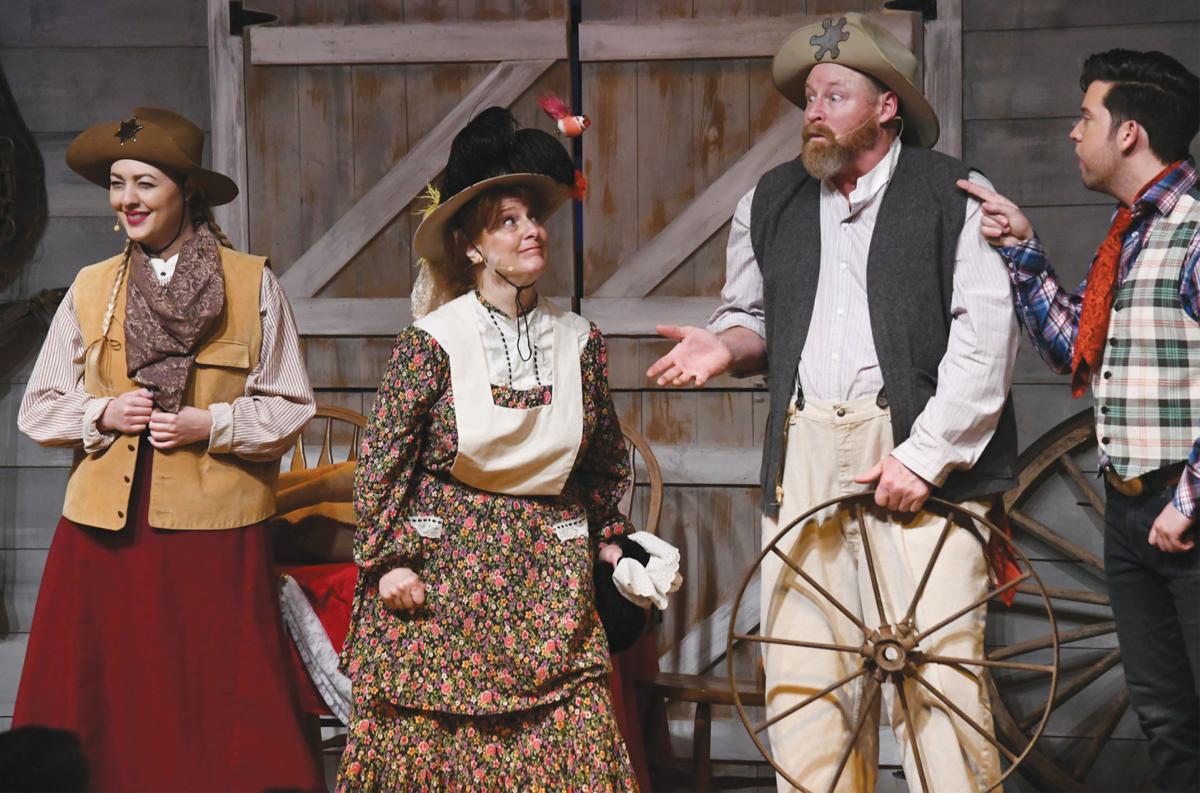 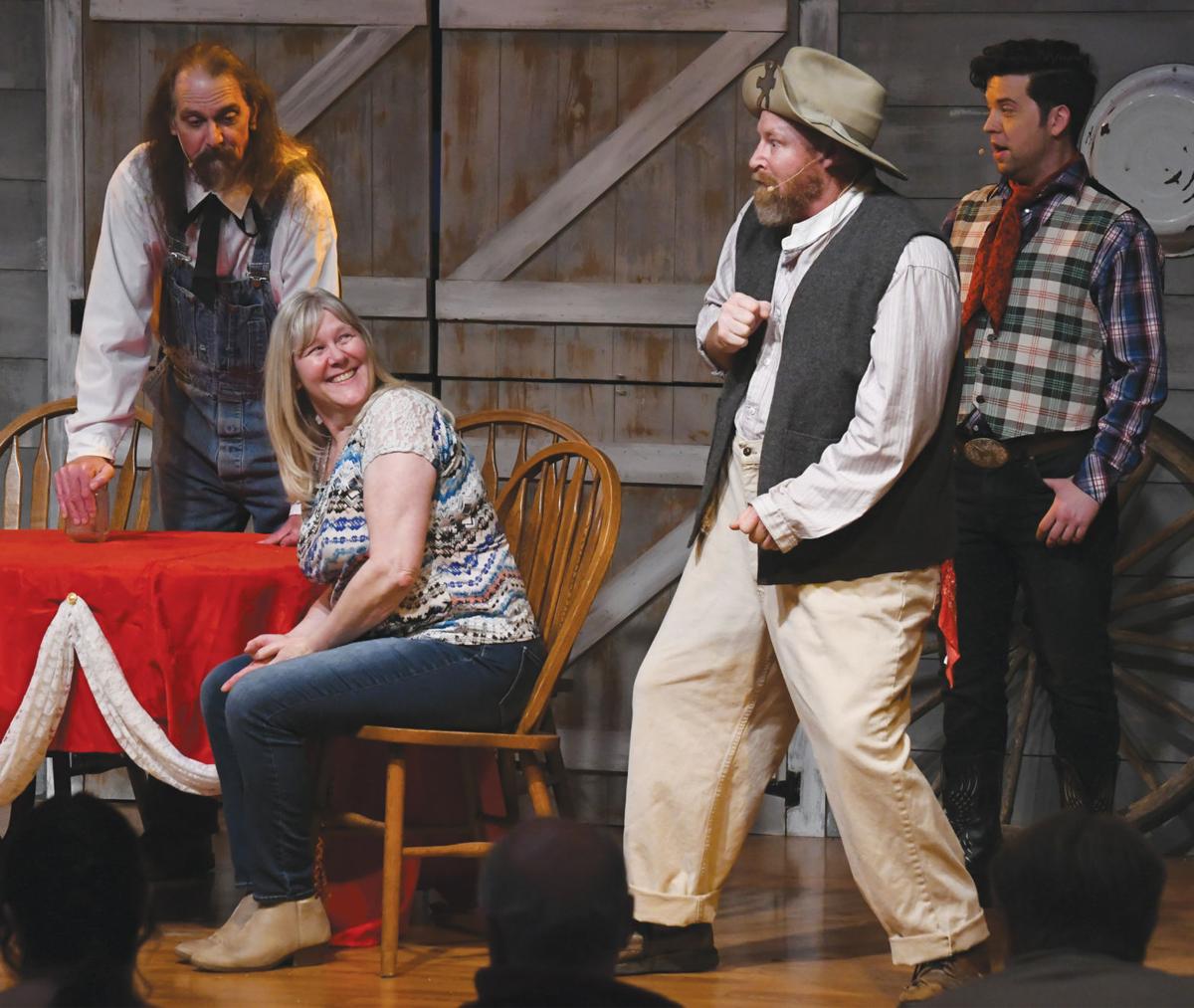 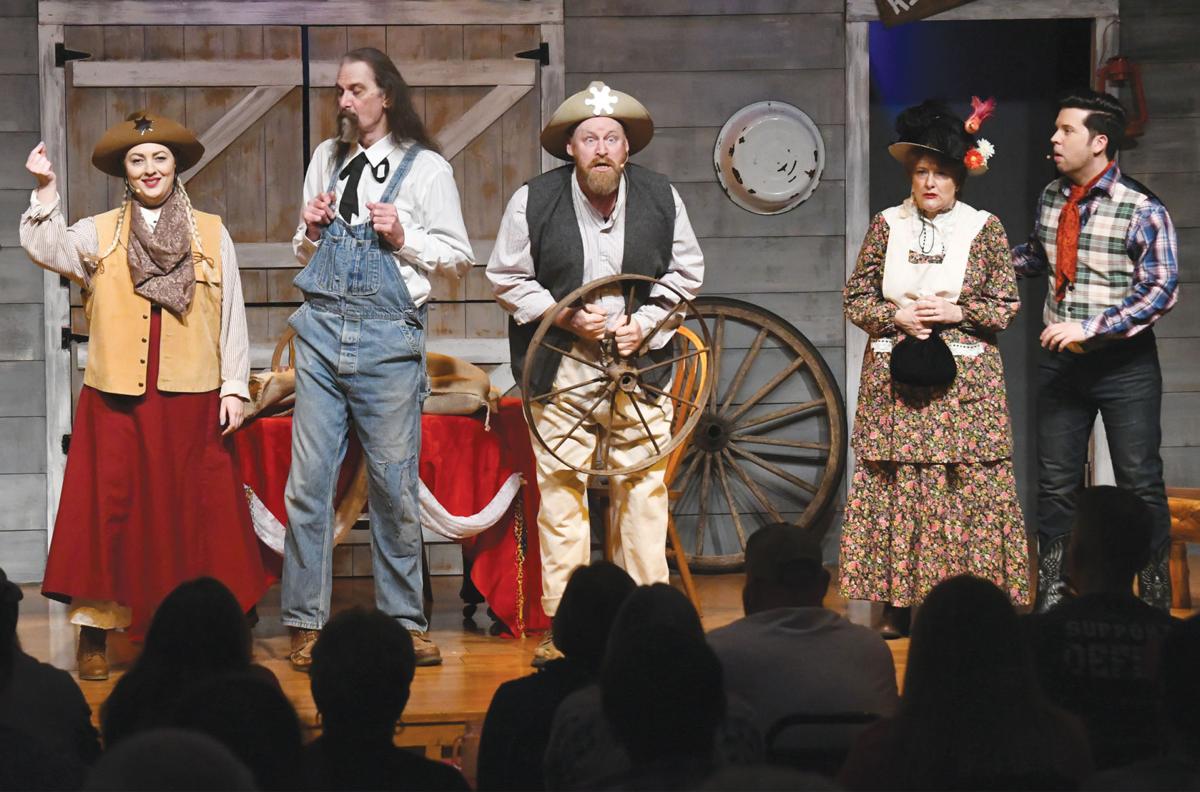 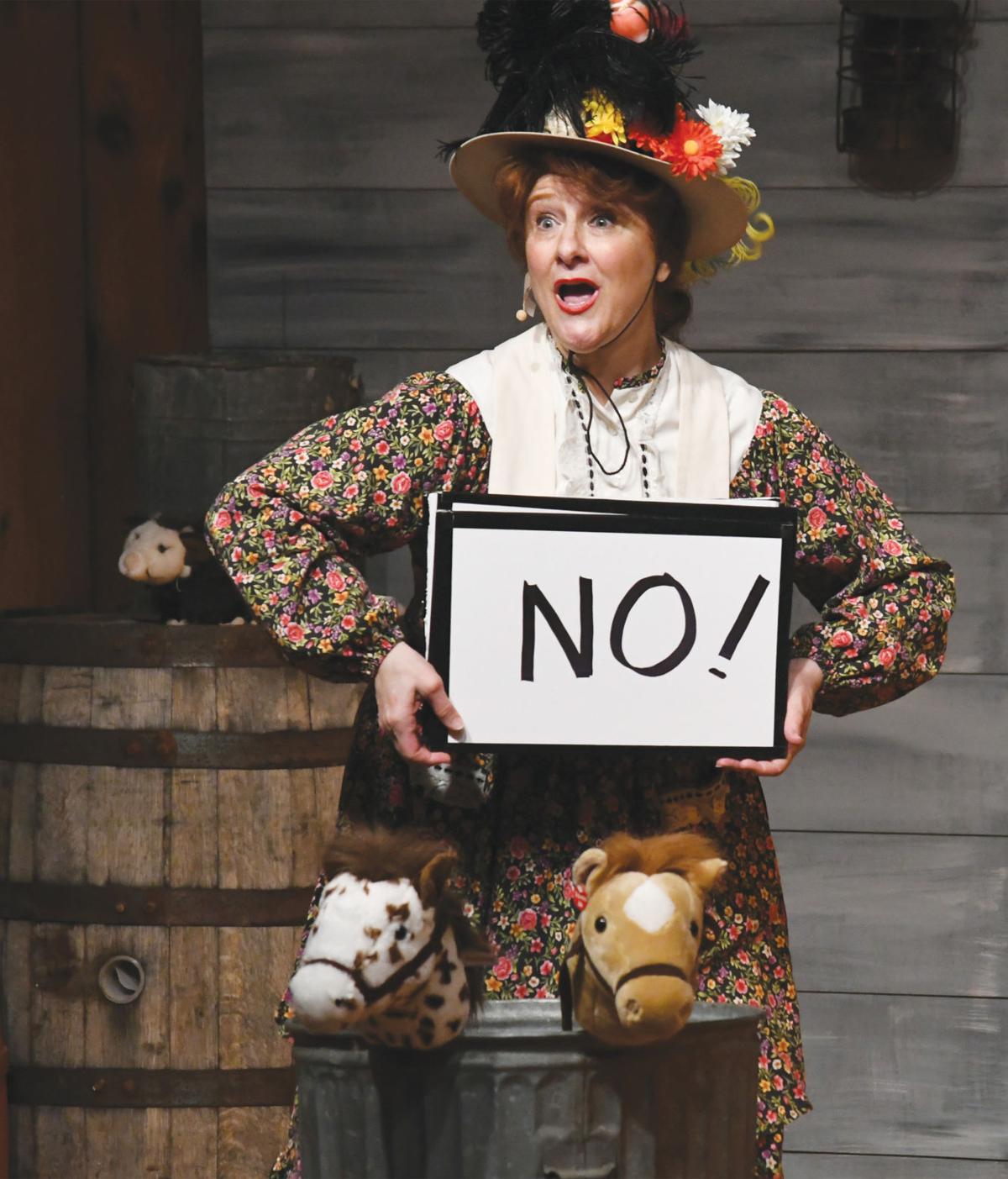 Dana “Aunt Belle” Embree feeds lines to a suspect during the “WhoDunnit Hoedown – A Murder Mystery Dinner Show” at the Shepherd of the Hills Historic Homestead & Adventure Park. 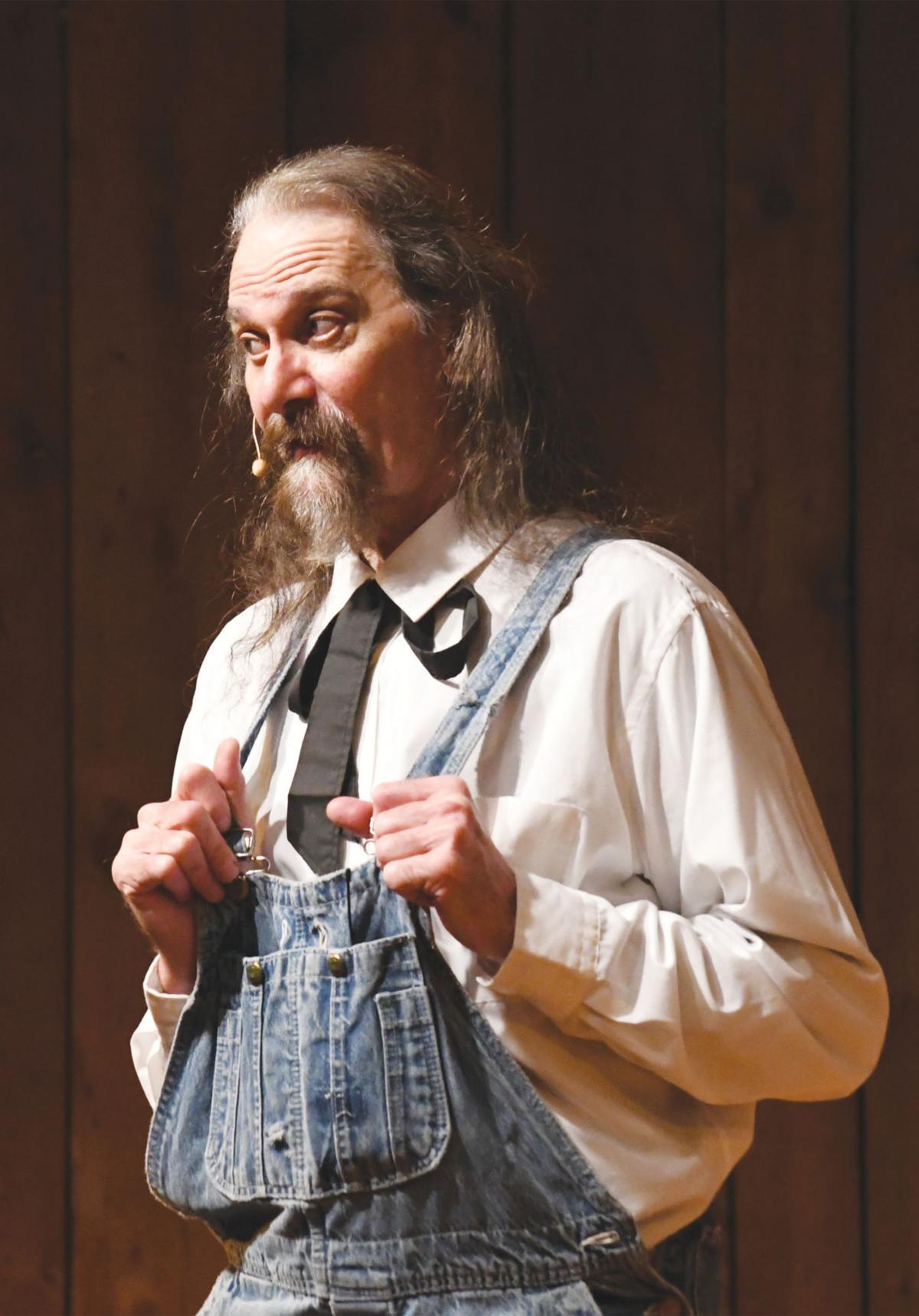 Shaun “Uncle Penn” Blair sets the stage for the show.

Dana “Aunt Belle” Embree feeds lines to a suspect during the “WhoDunnit Hoedown – A Murder Mystery Dinner Show” at the Shepherd of the Hills Historic Homestead & Adventure Park.

Shaun “Uncle Penn” Blair sets the stage for the show.

Enjoy it while you can

Well Loyal Reader(s), with news and information breaking seemingly every minute, I’ve been forced to change this issue’s planned entertainment coverage more than a few times.

So, rather than worry about what breaks after deadline, I decided to share some thoughts about a show I visited last week, which is slated to, as of press time, remain up and running.

I visited the Shepherd of the Hill Historic Homestead and Adventure Park’s latest production, the “WhoDunnit Hoedown – A Murder Mystery Dinner Show” at the Playhouse Theatre.

This new show experience begins with a dinner of a bacon-wrapped pork chop and a herb-roasted chicken quarter with rice pilaf, a grilled corn cob, a green salad, dinner roll and a beverage. The dessert, a flat-out fantastic birthday cake, is saved for later as a way to help the audience be a bigger part of the show, which kicks off once dinner is done.

The “WhoDunnit Hoedown – A Murder Mystery Dinner Show” is set at Aunt Belle’s birthday party, where everyone is sitting around chatting, waiting for the festivities to begin. All of a sudden,  news breaks legendary fiddler Squeeky Bowman, who is either the third or fourth most talented fiddler in the region, depending on who you ask, just met a mysterious demise.

While the cast runs down their list of suspects and motives, several shady characters emerge, and you may just know one or two.

This show was an awful lot of fun, and that is thanks, in large part, to a talented cast featuring Somer Dean as “Deputy Shirley” Lockholm, Shaun Blair as “Uncle Penn,” Mike Tilden as “Deputy Dewey Daugh,” Dana Embree as “Aunt Belle” Embree and James  Martin as “Turner Jussrite.”

Their interactions with the crowd, both before and during the show, really helped to set the mood, and by the time we all had birthday cake, I felt like I was at a big party, which is the whole idea.

The thing not a lot of folks realize is all “murder mystery” shows must be “works in progress,” as the story stays the same, but the audience members change for every show.

The audience plays a huge part, which makes what the cast and crew do all that more impressive. Their improv skills were on full display, and it looked to me like they were having quite a bit of fun.

Plus, the 7 p.m. start time perfectly combines the dinner and show experience.

Shows are set for Monday, Wednesday, Friday at 7 p.m.

I’ll be back this weekend with more updates on all there is to see and do in Branson.