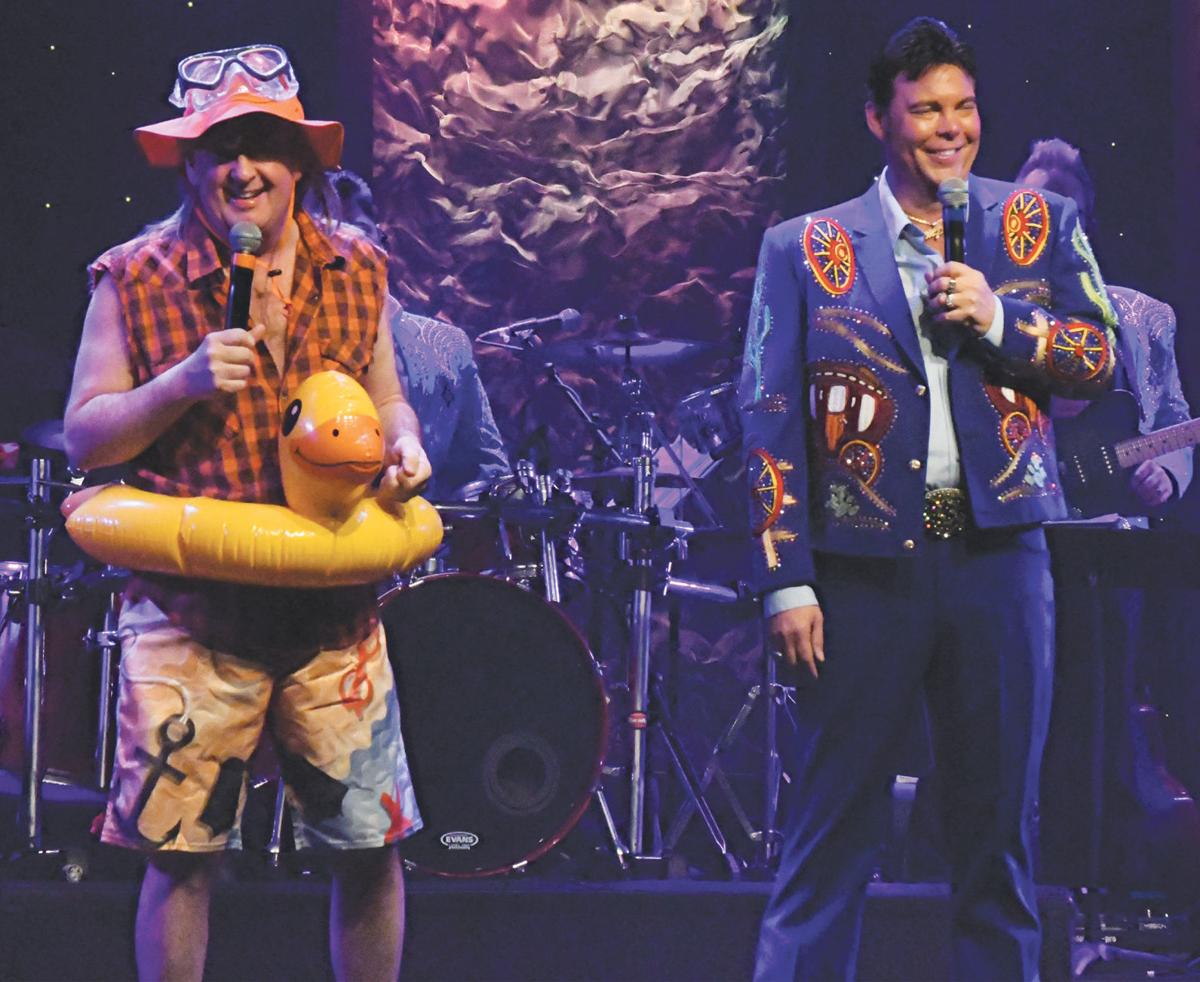 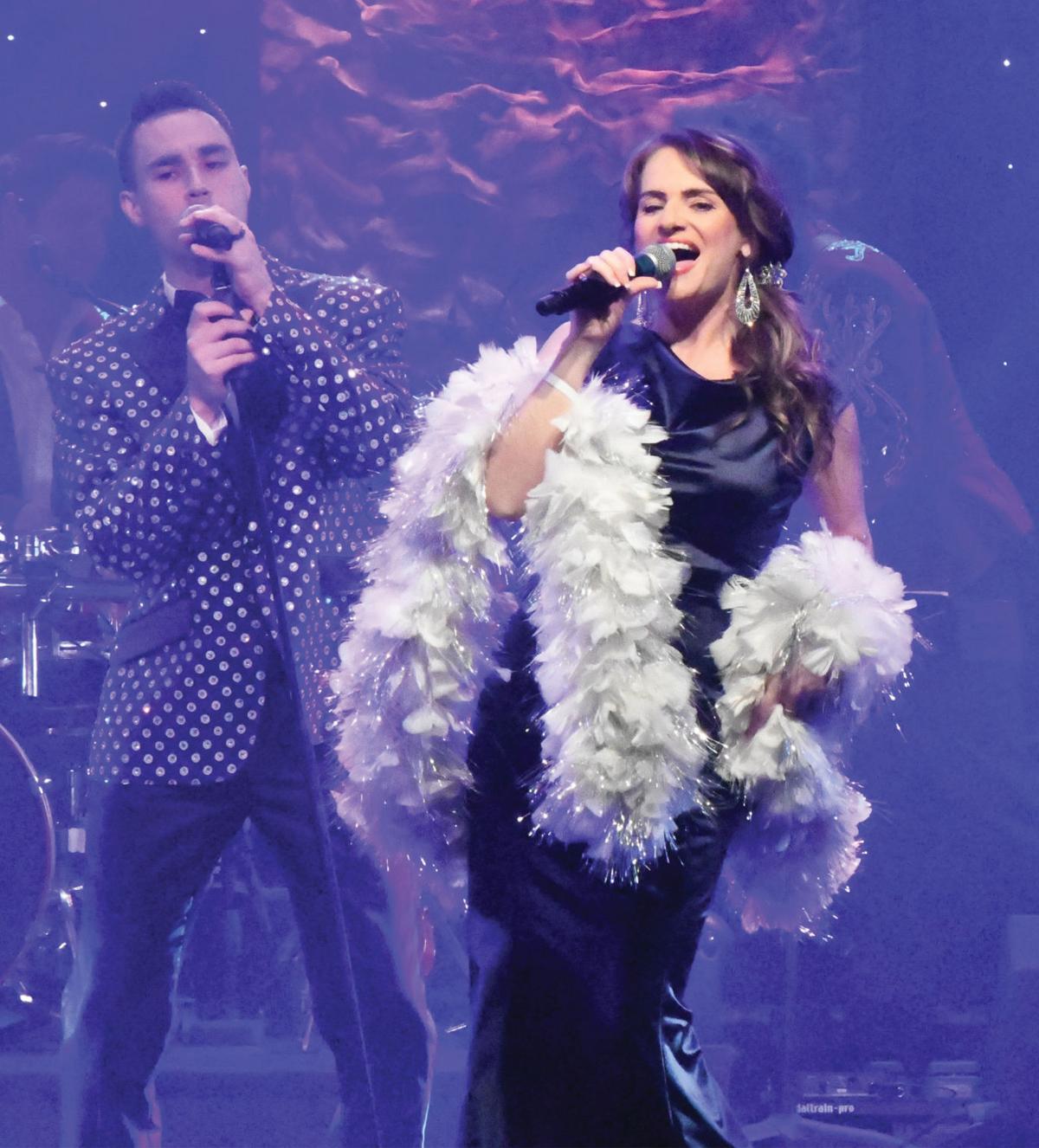 David Ragan and Jackie Brown belt out a tune at “Grand jubilee.” 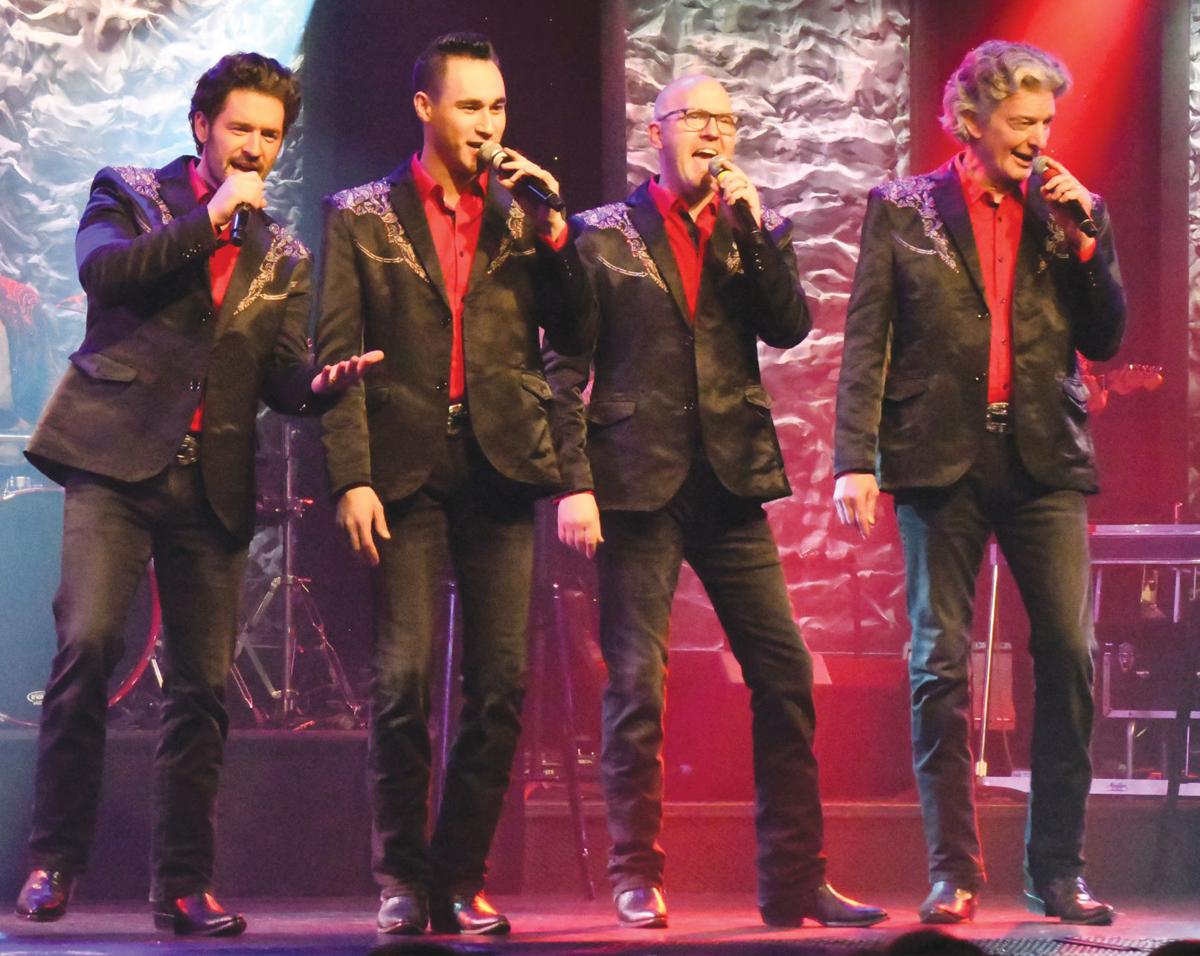 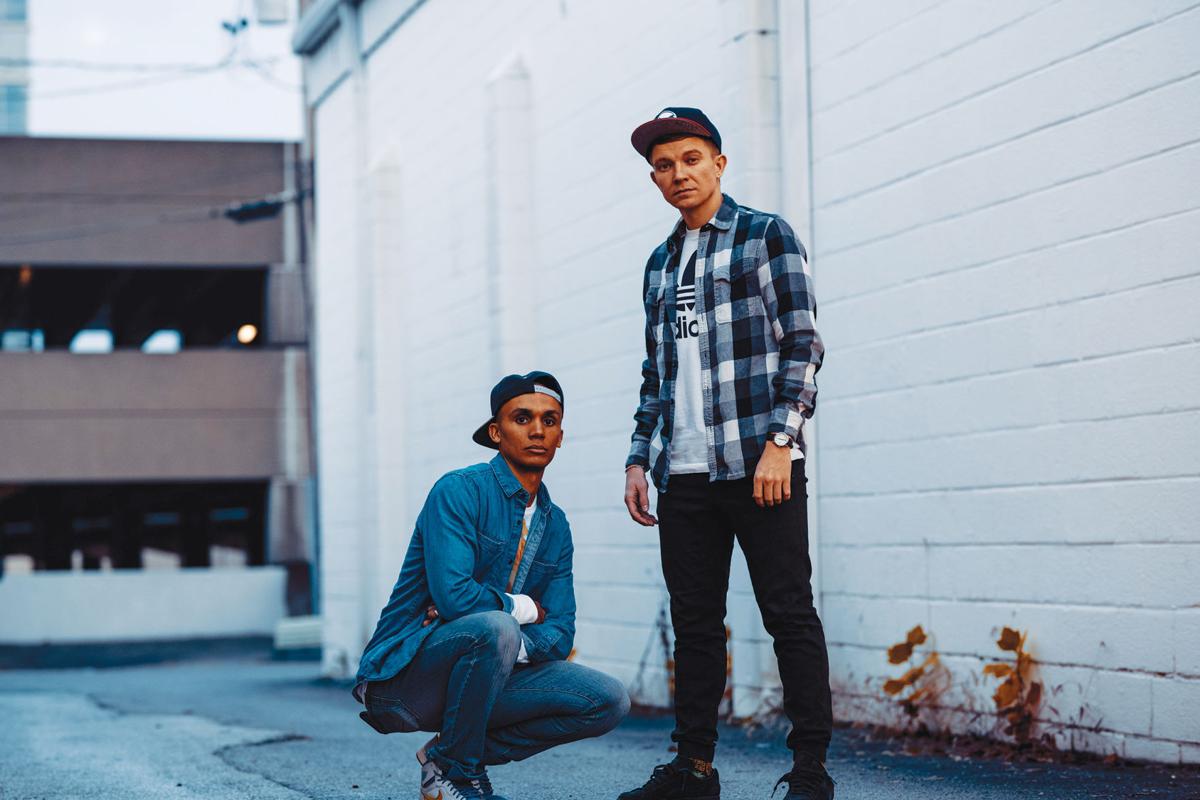 David Ragan and Jackie Brown belt out a tune at “Grand jubilee.”

2020 ‘Grand Jubilee’ may be their best show yet

After taking some much needed time off, the cast of Grand Country Music Hall’s “Grand Jubilee” show returned to the stage last week, complete with their new 2020 show.

For the past few months, the show’s emcee and producer extraordinaire Mike “The Golden Throat of the Ozarks” Patrick has been teasing the 2020 show, and on more than one occasion, told me he had a feeling this could be one of the best show’s he’s ever assembled.

Well Loyal Reader(s), after catching the new show last week, I tend to be in agreement with him. “Jubilee” has always been a top show in Ozark Mountain Country, but the perfect storm of a ridiculously talented cast combined with one of the strongest, most balanced set lists I’ve seen in quite a while, have this year’s edition in the running as the best one ever.

Those who count “Grand Jubilee” among their favorites will be happy to know the show still feature’s Patrick’s formula of country, quartet, gospel in the first half, and some of the greatest hits, regardless of genre, of the last 70 years in the second half. This year, Patrick has truly outdone himself as far as the tunes he chose to highlight. Patrick took more than a few chances with the 2020 show, and I think every single one paid off in spades.

The show again features Patrick as emcee, along with the uber-talented Jamie “Jim Dandy” Haage, female vocalist Jackie brown, the New South Quartet featuring David Ragan, Jon Drockelman, Mark McCauley, Luke Menard, and the “Rhinestone Mafia,” consisting of steel guitarist and band leader Gene Mulvaney, keyboard player Michael W. Davis, bassist Larry Allred, drummer Rob Blackburn, guitarist Chad Cathell and fiddler Wayne Massengale. Not only is each and every person on that stage supremely talented, but Patrick puts them in the perfect position to shine as bright as possible whenever they get the chance.

With the “Grand Jubilee” cast being one of the most talented, and largest, in the area, it would be impossible for me to mention each and every person’s individual highlights, but I did want to mention a few “stand out” moments, at least in the eyes of this reporter.

As always, Mike and Jamie are hilarious, and the band sounds so good, they may very well be the best in town. Of course, Jackie, Luke and Jon slay every single thing they sing, from solos to duets and harmonies.

One moment that stood out was Mark McCauley and the rest of his New South brothers flat-out nailing Kris Kristofferson‘s “Why Me Lord,” which is perfectly executed and gave me goosebumps while making me feel like I was going to church. Perfect.

Speaking of perfection, David Ragan singing lead on the quartet’s rendition of the Alabama classic “Love in the First Degree” might just be worth the price of admission. Seriously, his tone is perfect for any of those great Alabama songs, and when you add the harmony of the rest of the quartet, something special happens on that stage. It’s as outstanding as outstanding can be.

Another personal favorite of mine was Michael W. Davis belting out the Elton John classic “Your Song.” Davis has a great voice, and I dare anyone to listen to him sing that, or any tune, and not be filled with the pure joy that live music is meant to bring out. I could listen to him sing all night long.

Overall, the 2020 edition of “Grand Jubilee” features a perfect blend of comedy and country, rock ‘n’ roll, gospel and patriotic tunes, performed by one of the most talented lineups in this, or any other town. I’m sure Patrick’s pursuit of the perfect show will continue for many years to come, but I hope he realizes it’s going to be quite a difficult task to top this year’s “Jubilee.”

Jamming out to ‘The Preface’

A little more than a month ago, Brydon Brett and Aaron Ellsworth, also known as Prince Ivan, released “The Preface,” a new 16-track album of original tunes. Now that I’ve had the chance to listen to the album several times through, I figured it would be a great time to share a few thoughts with my Loyal Reader(s).

Much like their professional background, the album is filled with tunes that cross and combine many genres of popular music. In fact, I could hear the influences of Earth, Wind and Fire; the Emotions; Bruno Mars; Justin Timberlake; Kirk Franklin; Kanye West; and Michael Jackson, just to name a few.

While those influences are most assuredly present in the album, make no mistake, “The Preface” is as original as can be. It’s one of those rare things that sounds distinctly familiar and completely new at the same time, and that’s probably what I dug most about the album.

First and foremost, I feel like “The Preface” is very much a “concept album,” which means the “tracks hold a larger meaning collectively than they do individually.” While listening to the album from beginning to end provides a unique “listener experience,” the tracks are also fantastic on an individual level.

The first track, “The Preface (Intro),”  which features the guys sharing their hopes for a world “where the forces of hope, joy, unity and peace overcome. Where darkness gives way to light, where good drives out evil, where love wins,” perfectly sets the stage for the rest of the disc.

From there, Prince Ivan bobs and weaves through love songs, dance diddles, musical interludes, hip hop and summer anthems, all which are original and high quality, while staying positive. The tunes are smooth, soulful and heartfelt, many with decidedly “old school” vibes.

In fact, It’s almost impossible to listen to “Ain’t Nobody Else” without getting that late 80s, early 90s hip hop vibe. It’s a sweet love song that works perfectly.

From the slow, smooth jazzy feel of “When I Think of You,” (a personal favorite), to “#1 Jam Uhduh Summuh,” which gives you everything you need to roll down the windows and crank up the volume while cruising your local strip, “The Preface” just keeps on giving.

Like all great popular hits, the album’s 11th track, “DJ Tonight,” gets on you quick, and has a hook that will stick in your head all day long, which is okay with me. The tune is full of “old school” elements, and it’s a fantastic throwback tune that reminds you what stellar R & B songs should be.

As I would expect, the album ends with several uplifting tunes in “High Hopes” and “Warriors,” which really help to hammer the message of “The Preface” home. “High Hopes,” without a doubt one of the most unexpectedly awesome tracks on the album, is another of those tunes I could listen to on repeat for several days.

Back in 2015, Brett told me he wanted their music to have “edge, grit and mainstream quality, but ... definitely family-friendly with positive messages and nothing that parents would ever be embarrassed about, but not corny at all.”

It’s very rare when someone gives a quote about their intentions, goals and dreams, then follows through 100 percent, but that’s what Prince Ivan has done. “The Preface” is a fantastic, positive, upbeat and complete musical journey, which leaves you wanting more.

To keep track of all things Prince Ivan, visit princeivan.com.

The Shepherd of the Hills Historic Homestead and Adventure Park is hosting auditions for “Shad Heller’s Original Toby Show,” as well as three other productions set for the 2020 season.

Auditions will be limited to two minutes, and everyone is asked to prepare a comedic monologue. Accompaniment will be provided for those intending to sing. Auditions begin at 1 p.m. both days, and callbacks will happen the day of auditions, as well.