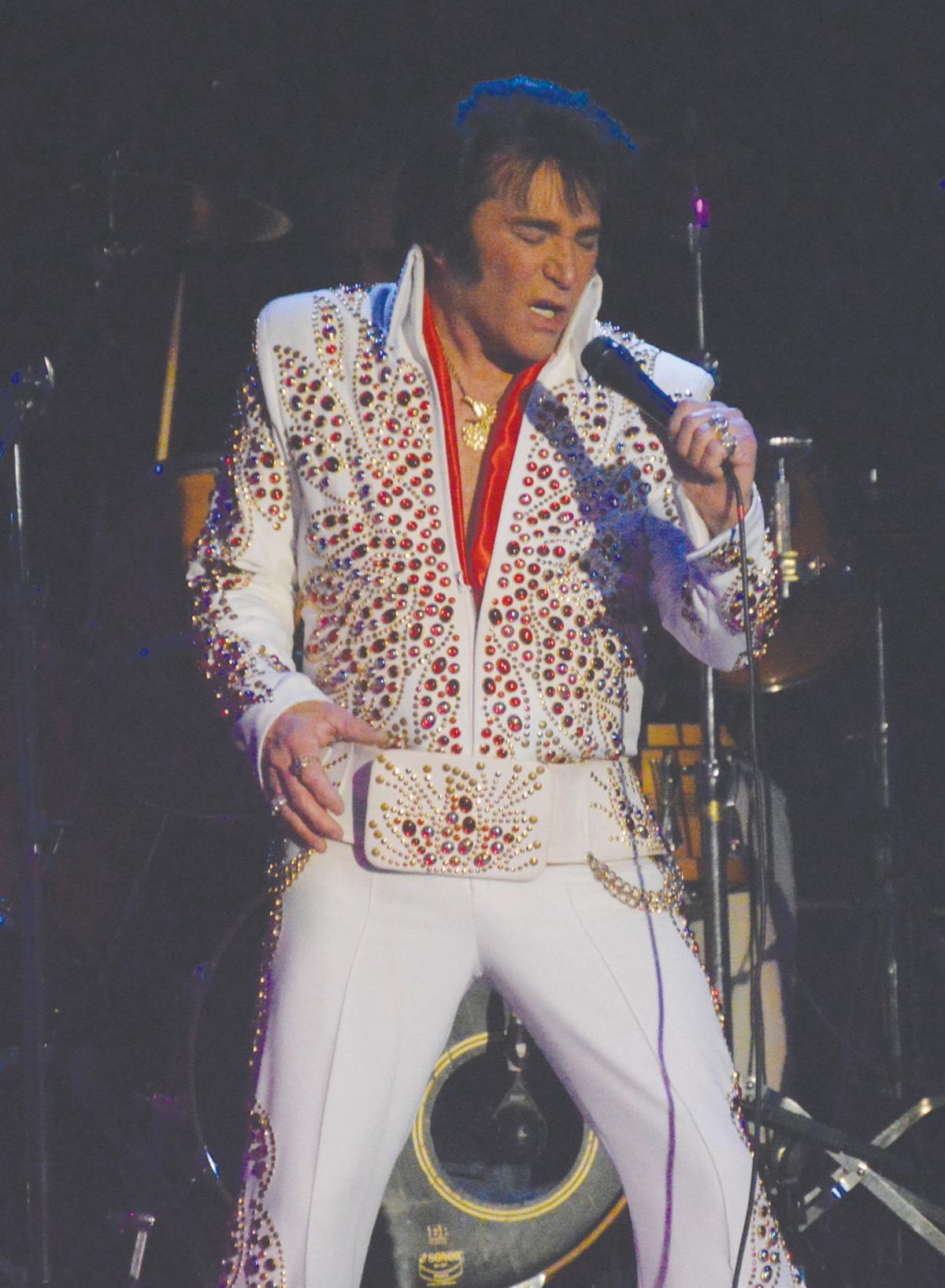 Jerry Presley will perform a special “Aloha from Hawaii” show Saturday night to celebrate what would have been his cousin Elvis Presley’s 84th birthday Jan. 8. 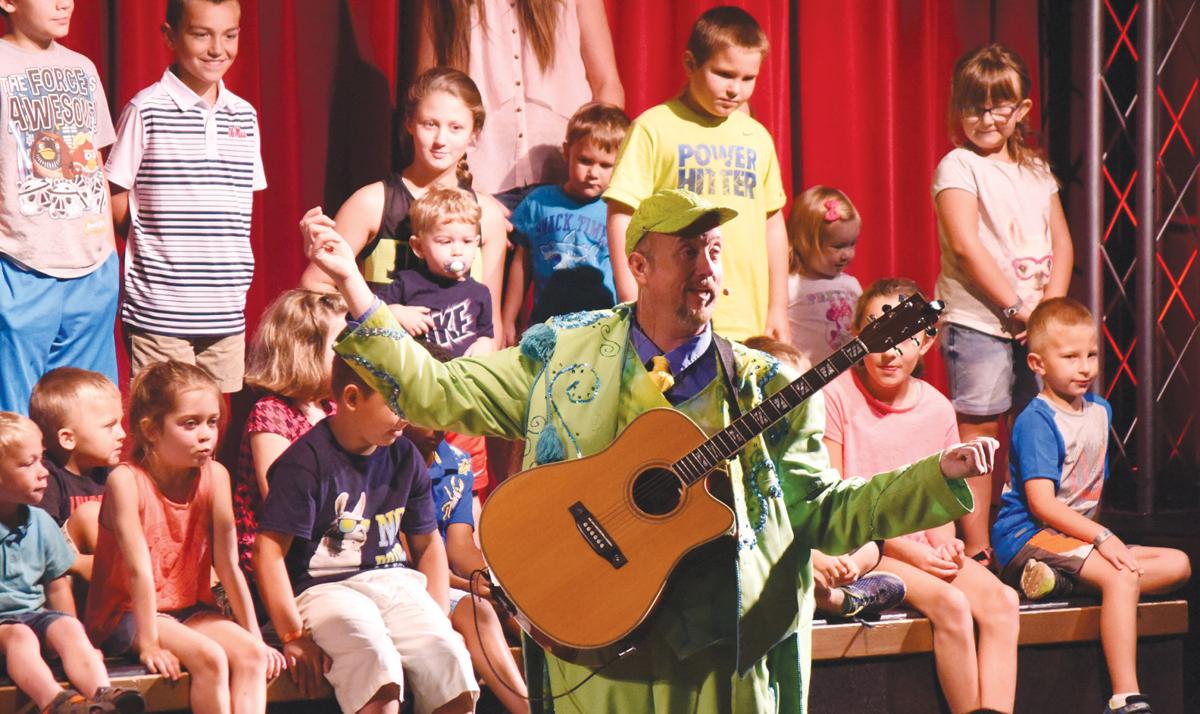 Jerry Presley will perform a special “Aloha from Hawaii” show Saturday night to celebrate what would have been his cousin Elvis Presley’s 84th birthday Jan. 8.

Saturday night at the God and Country Theatres, Jerry Presley is set to honor the birth of his cousin Elvis Presley by performing his “Aloha From Hawaii” show at 8 p.m.

On Jan. 8, 1935, Elvis Aaron Presley was born in Tupelo, Mississippi, and 21 years later, he was the biggest star on the planet. Even 42 years after his death in 1977, his life is still celebrated by legions of fans.

In 1970, Jerry Presley began performing his tribute concert to his cousin, touring the southern states opening for performers such as Jackie Wilson, The Drifters, The Platters, The Coasters, Bob Seager System, and Brownsville Station. By 1988, he was performing alongside Elvis’ original backup vocal group, the Jordaniares, and also opened for Lou Rawls, George Jones, Tammy Wynette, Tanya Tucker, Barbara Mandrell, Shenandoah, Billy Dean and more.

Jerry Presley first came to Branson in 1984 and built the King’s Mansion theater. According to Presley, he opened the first “Elvis show,” as well as the first “rock ‘n’ roll show” in Branson.

In 1989, he sold the venue and toured for several years, performing with Elvis’ original backup quartets, the Jordanaires, the Stamps, and the Blackwoods. Presley returned to Branson in 2013, performing in several venues before calling God and Country home.

Presley purchased the venue in 2016, and performs his “Elvis Live” show featuring several different concerts for more than 200 live shows per year, singing the music of “the King.”

Visit godandcountrytheatre.com for tickets, as well as a full schedule of shows.

Those “Amazing” animals are trained by Russian-born dog and cat trainer Valery Tsoraev, who has performed with the Cole Bros. Circus all over the world.

He was also featured, along with one of his cats, in the 2003 Tim Burton film “Big Fish.”

The show also features the natural goofiness and good nature of comedian Shannon “Apple Jack” Thomason, who has tailor made his set for a younger audience. From calling on the youngsters to tell jokes of their own to start the show, to gathering them together on stage for a sing along, Thomason makes sure the children are a huge part of the show.

In addition to “Amazing Pets,” the resort is also home to an awesome indoor waterpark called Splash Country,  featuring more than a handful of attractions, from a relaxing lazy river to an action packed tree house with a tipping bucket that holds 1,000 gallons. Also at Grand Country is the Fun Spot, complete with laser tag, indoor go karts, an XD ride, the Hologate virtual reality experience, black light mini golf, bumper cars and a full arcade.

Plus, you can also get pizza at Papa Grand’s Pizza, and custard at Glens Frozen Custard.

When the Branson Regional Arts Council, BRAC, began operations at the Historic Owen Theatre in 2018, organizers set their sights on creating an artist gallery set to feature the work of a variety of area artists in rotation to coincide with major theatrical musicals and plays on the Owen Theatre stage.

“This gallery space fits perfectly into our long term goal of preserving the rich cultural heritage that Jim Owen brought to our community when he built the entertainment venue in 1936,’ said Executive Director of the Arts Council Jim Barber. “In fact, in addition to the movie theatre, the original use of this facility included a jewelry and art gallery shop curated by Elsa Bates Freund, the famed Ozarks artist and good friend of Jim Owen.”

Freund painted four original murals at the venue, two of which are still on display inside the seating area of the theatre. While a previous tenant painted over two of the original four murals, the folks at the Arts Council are exploring the possibility of restoring those original works for future generations to enjoy. There is also a metal plaque in her honor at the front entrance of the theatre, thanks to the City of Branson and the Branson Art Council.

Several of Addai’s works have been on display for the past two theatre productions, and were enjoyed by approximately 2,000 patrons. He also donated his artistic skills to paint a canvas mountain scene backdrop for the “Seven Brides for Seven Brothers” musical production.

As far as 2020 goes, the BRAC plans to feature a wide variety of local area artists in the Rock Room Gallery, with rotating exhibitions that relate in some way to the featured stage production at the time. Currently, the gallery exhibits will only be open to the public in conjunction with any live musicals or plays presented at the theatre.

Discussions are in the works, however, to secure a full or part-time curator so that regular gallery visiting hours may be established year-round.

On February 14, the musical “The Wizard Of Oz” will be presented, and any artists who would like to submit theme related works for consideration to be displayed in the gallery are asked to contact the Branson Regional Arts Council at info@bransonarts.org.

If selected, artists will be able to offer their exhibited works for sale to the public during the run of the musical which is expected to play to sold out audiences through March 1, 2020.

Creation of this new artist gallery space was possible because of the generous donations and hard work from several volunteer board members of the Branson Regional Arts Council and others, including Marty Schmitt, who donated the art wall hanging system, Darla Howe, Nathan Howe, Kim Hale, Art Hale, who helped with room preparation, sanding painting, staining, lighting fixtures and curtains, and Lowe’s in Hollister, which donated the paint and stain.

For more information on the Rock Room Art Gallery, as well as anything else BRAC related, visit bransonarts.org.

The folks at the King’s Castle Theatre recently unveiled the 2020 lineup of shows, which features a new production, “Anthems of Rock.”

According to a release, “Anthems of Rock” will deliver “an outstanding show of No. 1 hits from the some of most famous bands of the 20th century, including Queen, The Beatles, The Rolling Stones, Bon Jovi, Led Zeppelin, Journey, Aerosmith, and more.

The show is also slated to feature tributes to Elton John’s film “Rocket Man,” as well as the award winning film “Bohemian Rhapsody,” which highlighted the life and times of Queen and their flamboyant front man, Freddie Mercury. Tunes from other artists including Led Zeppelin, the Eagles, Pink Floyd, Chicago.

“Anthems of Rock” opens in March.

Back for another season is the hit show “New Jersey Nights.” This show features the music, life and times of Frankie Valli and The Four Seasons, which takes the audience on a nostalgic musical journey through the career of one of the biggest selling groups of all times.

The international cast performs all the big hits of Valli and his group, including “Sherry,” “Rag Dolls,” “Big Girls Don’t Cry,” “Walk Like A Man” and more.

Another of the venue’s most popular shows, “Dublin’s Irish Tenors & The Celtic Ladies,” will also return for another season. According to a release, this show features “wonderful harmonies and lilting melodies” that take the audience on a “breathtaking musical journey covering Irish classics, opera, pop and jazz standards.”

Finally, the theatre will also bring back “Branson’s Christmas Wonderland,” one of Branson’s largest holiday productions.

A sparkling cast of singers and dancers takes the audience on “an unforgettable and magical sleigh ride to a grand Christmas extravaganza” with “high-energy dance, elaborate costumes, beautiful scenery, gorgeous production numbers and the highest-kicking chorus girls this side of the North Pole.”

“For over 20 years, first class entertainment has been brought to you by London’s finest producer, Mr. David King to the heart of Branson’s theatre district,” said King’s Castle General Manager Jacqui Bell. “Let this international cast take you on a musical journey fit for royalty at the King’s Castle Theatre.”

Rock House to host Snaps for Sinners next Saturday

The Rock House Center for the Arts in Reeds Spring is gearing up to host Snaps for Sinners next Saturday, Jan. 18.

Snaps for Sinners is a “saucy swing ensemble hellbent on making people dance and have a good time, while also delivering a powerful progressive message that inspires empathy and altruism.” With influences ranging from traditional jazz to folk-punk to country, the band is dedicated to creating an all-inclusive experience through the blending of multicultural arts.

With the release of their new album, “How the Apple Falls” and the success of their debut tour, from Northern California to North Carolina and back, Snaps for Sinners has been igniting audiences nationally.

Tickets are $15 and can be purchased online at  rockhousecenterforthearts.org/calendar-tickets.

Visit rockhousecenterforthearts.org a full calendar of shows and events.