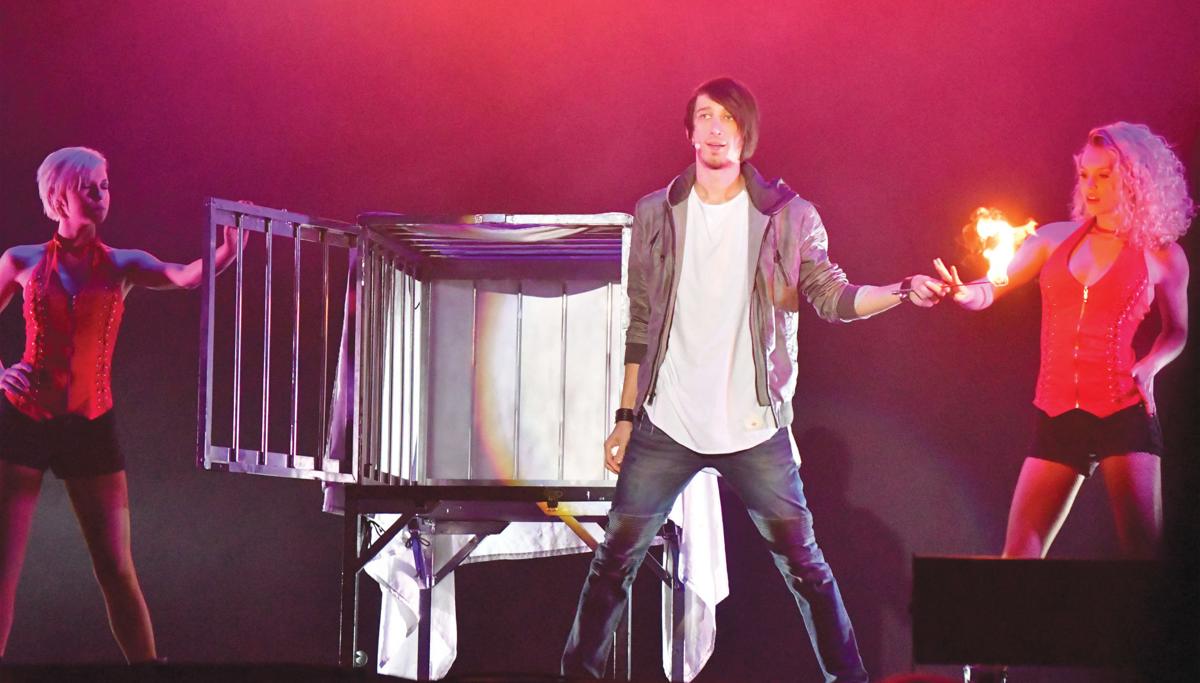 Illusionist Reza, Center, will present his “Edge of Illusion” show on both Christmas Eve, as well as Christmas Day at the Branson Famous Theatre. 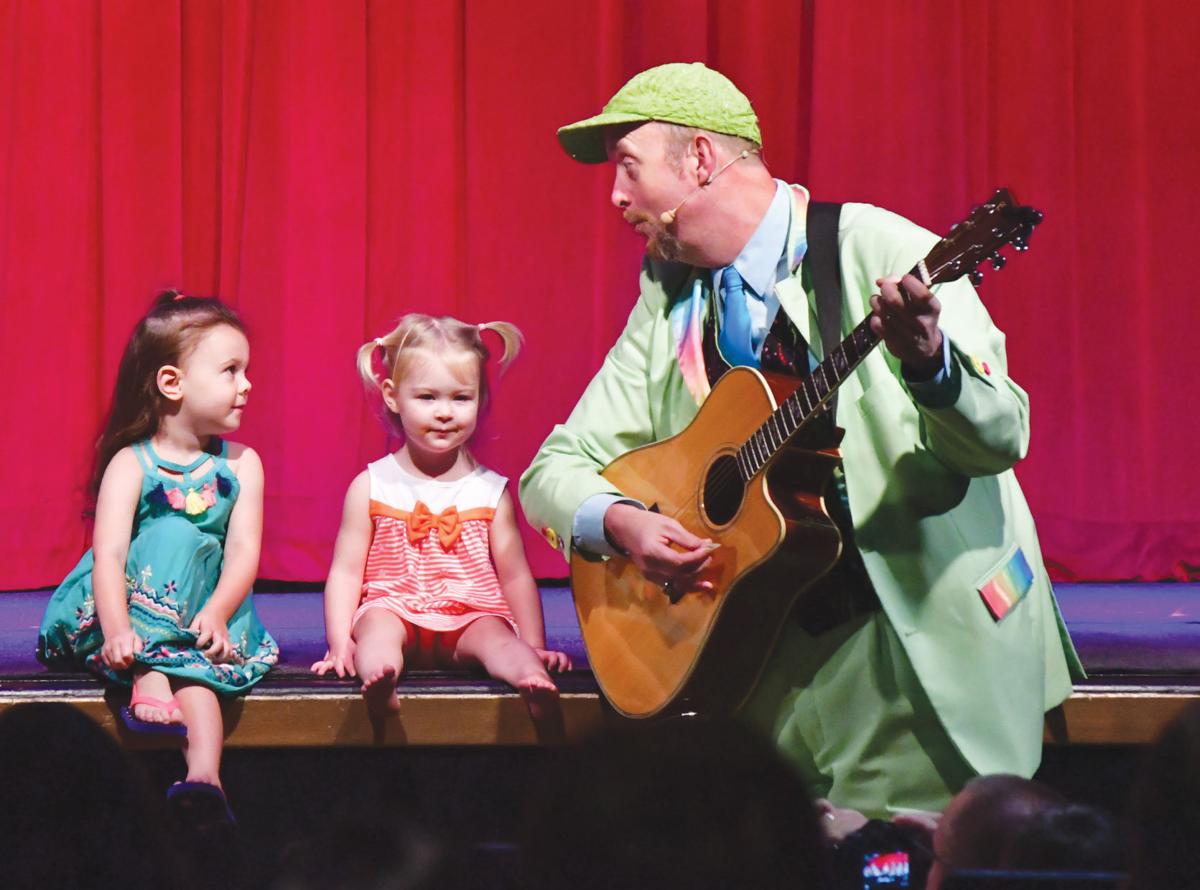 Shannon “Apple Jack” Thomason, right, and the rest of the cast of “Amazing Pets” take the stage for shows Christmas Day, as well as Christmas Eve.

Illusionist Reza, Center, will present his “Edge of Illusion” show on both Christmas Eve, as well as Christmas Day at the Branson Famous Theatre.

Shannon “Apple Jack” Thomason, right, and the rest of the cast of “Amazing Pets” take the stage for shows Christmas Day, as well as Christmas Eve.

Christmas Day is next week, and here in Branson, there is no shortage of things to see and do on Christmas Eve, as well as Christmas Day.

Kartsonakis starred in one of the first Branson Christmas shows in 1989 and went on to co-headline a multi-million-dollar Christmas production show at the Grand Palace, along with “The Radio City Christmas Spectacular” starring the Rockettes.

During his career, Dino introduced Branson to international audiences with his weekly television shows and specials on Trinity Broadcast Network. He has performed on the Jerry Lewis Telethon and also hosted and performed at the Preliminary Competition Show for the MISS USA Pageant on CBS in 1999 and 2000.

The Playhouse Theatre offers a unique, up-close and personal atmosphere for guests. A traditional Christmas meal will be served as guests enjoy favorite holiday carols as well as some of the greatest songs of all-time.

During this 2 hour show, guests will see skating flips and jumps, ice dancing and synchronized skating, trapeze on ice and in the air, pole jumping, juggling and more.

Showtimes are 3 p.m. Christmas Eve and Christmas Day, as ell as an 8 p.m. show Christmas night.

One of Branson’s most popular shows, “Acrobats of Shanghai” takes audiences on an “enchanting journey through the Orient with beautiful costumes, scenery, and the unbelievable art of acrobatics.”

The talent from these performers includes chair balancing to foot juggling, aerial acrobatics to mask changing.

Fay not only features more than a dozen tunes made famous by Cline, but also pays tribute to Dolly Parton, Tammy Wynette, Tanya Tucker, Loretta Lynn and more. Fay is also joined by entertainer Sierra Schwanz, as well as fiddler Jerry Shapiro during this 90 minute show.

Those “Amazing” animals are trained by Russian-born dog and cat trainer Valery Tsoraev, who has performed with the Cole Bros. Circus all over the world. He was also featured, along with one of his cats, in the 2003 Tim Burton film “Big Fish.”

The show also features the natural goofiness and good nature of comedian Shannon “Apple Jack” Thomason, who has tailor made his set for a younger audience. The show also uses audience participation, including youngsters tell jokes of their own to start the show, to gathering them together on stage for a sing along.

Roberts takes the stage with her own extraordinary personality, delivering an energetic and highly entertaining performance.

This show features the biggest Motown and R & B hits of the 60s and 70s, from artists such as the Temptations, Marvin Gaye, Stevie Wonder, Lionel Richie, the Supremes, Martha and the Vandellas and more. The guys on stage also capture the essence of the era with coordinated suits and synchronized dance steps that helped make those acts legends.

A few seasons back, the younger Petersens, Katie, Ellen, Matt and Julianne Petersen began taking a more active role in the content and direction of the group.

This show, which also features a full-course turkey dinner with pumpkin dessert, catches up with “Shepherd of the Hills” character Ollie Stewart several years after losing his sweetheart, Sammy Lane, to his childhood friend and rival, Young Matt Matthews. Mandy Ford, Uncle Ike, and the rest of the neighborhood attempt to include Ollie in their Christmas festivities as they try to remind him of the magic of Christmas and the true meaning of friendship.

This show features the greatest hits of Glen Campbell’s impressive career including “Galveston,” “Rhinestone Cowboy,” “Wichita Lineman,” “True Grit,” “Southern Nights,” “Gentle On My Mind,” “Country Boy,” “By The Time I Get To Phoenix” and more.

This show features the music of George Strait, the man who tallied 57 No. 1 hits. Garrett covers tunes including “Ocean Front Property,” “Amarillo by Morning” and more.

During the show, Singley first snags some volunteers, who are the real stars.

Once he hypnotizes the volunteers, Singley serves as a ringmaster of sorts, coming up with suggestions for situations and behavior perfect for laughs. Singley, who spent time as an emcee with Dolly Parton’s Stampede, seem right at home on stage, and he’s quite “dry” with his deliveries, which tickled me all the more.

“Reza: Edge of Illusion” features mostly original illusions and content, along with humor, charm, and the art of misdirection. The show will also feature exciting dancers and assistants, as well as world-class illusions.

In addition to all that fun on stage, Branson’s drive-thru light displays are also open for Christmas Eve, as well as Christmas night.

One of Branson’s oldest tourist attractions, the Shepherd of the Hills Homestead and Adventure Park, is again hosting the Trail of Lights, Branson‘s original, longest running drive-through light display.

The Lights of Joy displays include everything from Santa and elves to whimsical things like a dinosaur park, Santa shooting hoops into a basketball goal over the road, elves playing ice hockey, toy trains and more. There’s sure to be something for everyone.

Not only are there hundreds of light displays to light up your visual senses, but you can also take a picture with Santa Claus, Mr. and Mrs. Frosty, enjoy delicious hot cocoa and donate to Christian Action Ministries.

Branson’s Promised Land Zoo’s Let There Be Lights drive-thru will also be open Christmas Eve, as well as Christmas Day. This unique drive thru features dozens of LED displays, a living Nativity scene and Santa’s real reindeer team. Folks can also get a special glimpse at some of the zoo animals as they drive through the bright two-mile trail. Plus, they’ve added a new Candy Land Courtyard this year.

With Santa’s VIP Safari Tram Tour admission, folks can tour through the Christmas lights from a climate controlled tour bus to meet and feed animals in the Safari as well as personally meet some of Santa’s Reindeer along with complimentary hot cocoa and popcorn too!