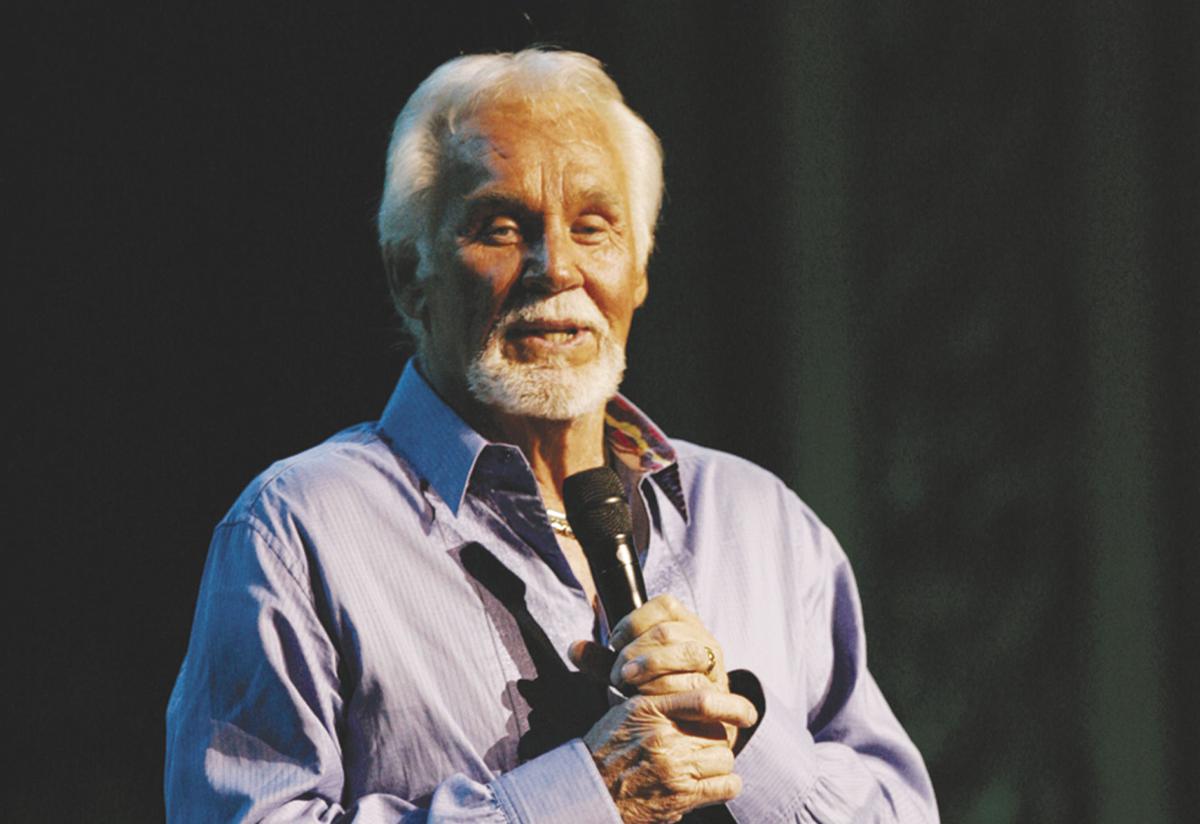 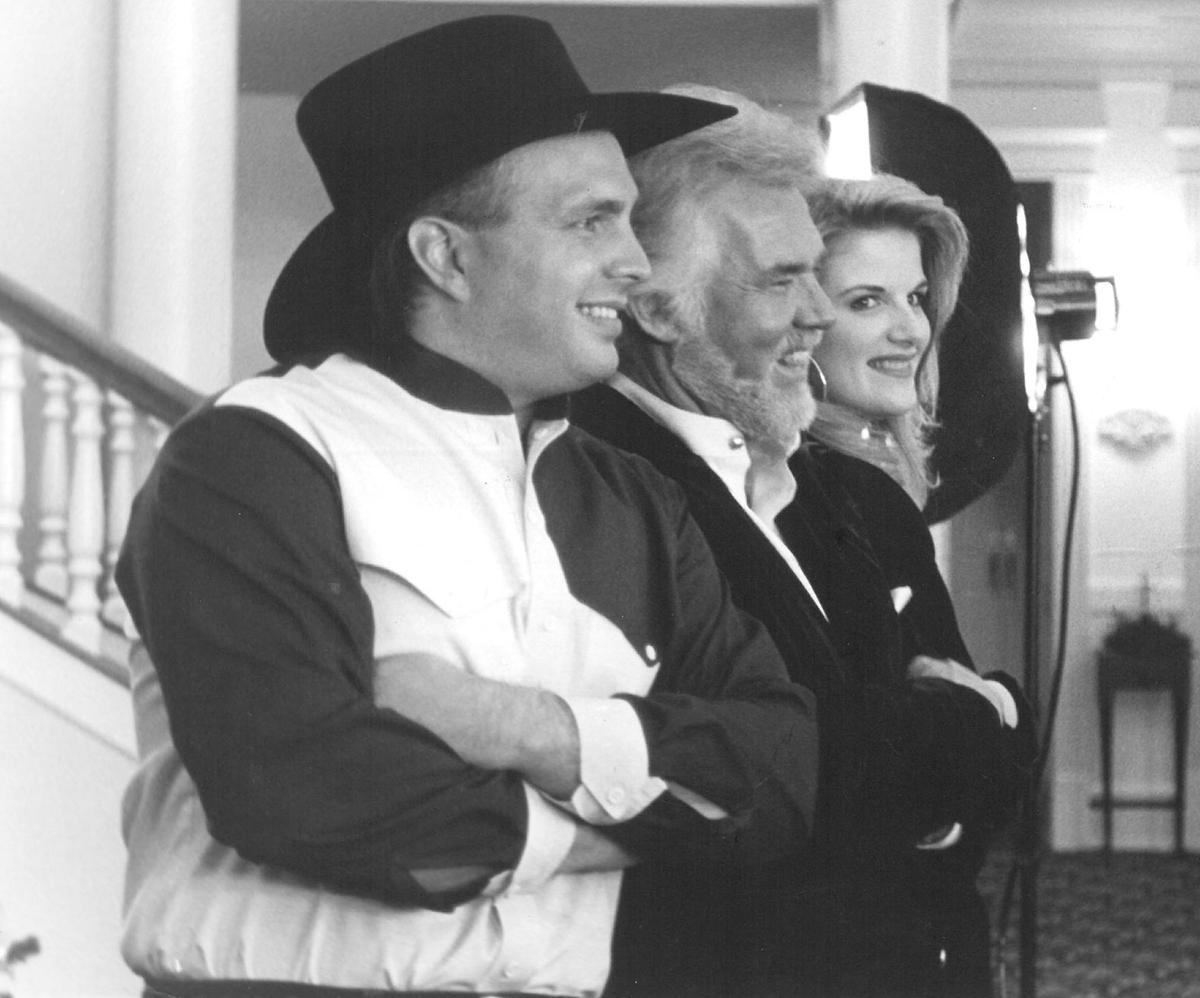 Garth Brooks, from left, Kenny Rogers and Trisha Yearwood are all smiles while doing a photo shoot at the Grand Palace in advance of Rogers’ TV special, “Kenny Rogers: Keep Christmas With You,” which aired in 1993. 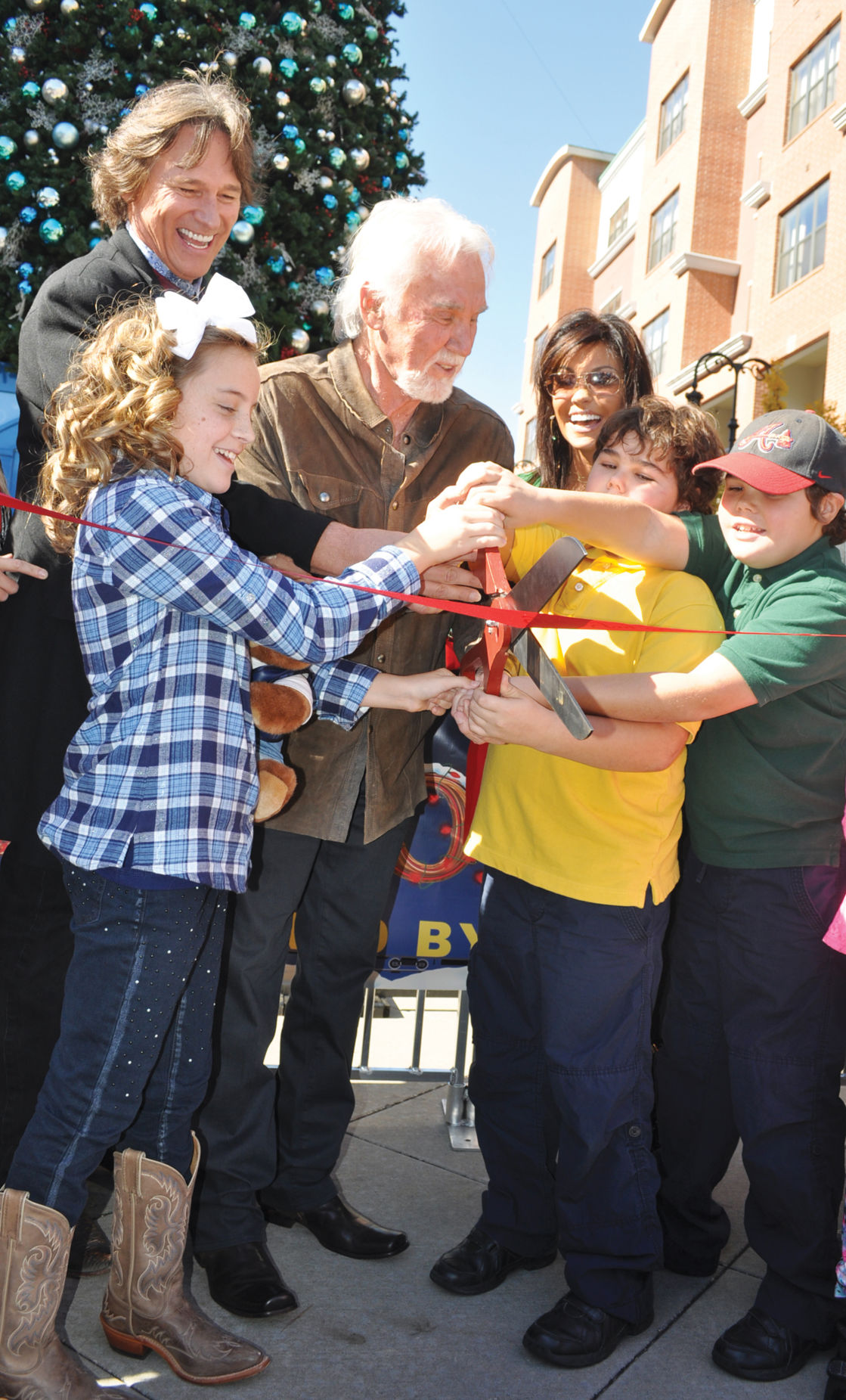 Kenny Rogers, center, helps cut the ribbon on his production of “The Toy Shoppe” while at Branson Landing in 2013. He is joined by “The Toy Shoppe” stars Billy Dean, from left, and Chloe Channell, as well as his wife Wanda Miller Rogers, and their twin sons Jordan and Justin.

Garth Brooks, from left, Kenny Rogers and Trisha Yearwood are all smiles while doing a photo shoot at the Grand Palace in advance of Rogers’ TV special, “Kenny Rogers: Keep Christmas With You,” which aired in 1993.

Kenny Rogers, center, helps cut the ribbon on his production of “The Toy Shoppe” while at Branson Landing in 2013. He is joined by “The Toy Shoppe” stars Billy Dean, from left, and Chloe Channell, as well as his wife Wanda Miller Rogers, and their twin sons Jordan and Justin.

The Gambler he broke even - Kenny Rogers dead at 81

Friday afternoon, the entertainment world lost one of its most popular performers as Kenny Rogers died at 81 from natural causes in hospice care at his home in Sandy Springs, Georgia.

Throughout his more than 60-year career, Rogers charted more than 120 hit singles on the country, pop, rock and adult contemporary charts while selling more than 120 million records worldwide, making him one of the best selling artists of all time.

Rogers was a five-time CMA Award winner, as well as the recipient of the CMA’s Willie Nelson Lifetime Achievement Award in 2013, the same year he was inducted into the Country Music Hall of Fame. He received 10 awards from the Academy of Country Music. He sold more than 47 million records in the United States alone, according to the Recording Industry Association of America.

His biggest hits include, my personal favorite, “Just Dropped in (To See What Condition My Condition Was In)” and “Reuben James” as a member of Kenny Rogers and the First Edition, as well as solo hits “Lucille,” “Lady,” “Love Will Turn You Around,” “She Believes in Me,” “The Coward of the County” and “The Gambler.” Rogers also saw the popularity of his many duets reach the stratosphere, most notably “Islands in the Stream” alongside Dolly Parton.

Once he became one of the most successful artists of all time, Rogers was able to parlay his fame into an acting career, starring in several movies, including “Six Pack,” as well as two films based on his songs in “The Gambler” and “Coward of the County.”

In the early 1990s, the “Branson Boom” was in full swing, and Rogers partnered with Herschend Family Entertainment owners Pete and Jack Herschend to bring the Grand Palace, Grand Village and Showboat Branson Belle to Branson. Rogers headlined shows at the Grand Palace for a handful of years, and was even among those who were aboard the Showboat Branson Belle when it launched in 1995.

According to Silver Dollar City, the partnership was dissolved shortly after the opening of the Showboat, “amicably, by both parties.”

Rogers continued to tour and act over the next two decades, and in 2015 while on “The Today Show,” he announced he was retiring in order to spend more time with his wife and twin boys, who were 11 at the time.

A few months after this announcement, I got the opportunity to chat with Rogers in advance of his final Branson show, “The Gambler’s Last Deal Christmas and Hits Tour,” along with special guest Linda Davis, which took place Nov. 26, 2016 at the Mansion Theatre.

When asked if he thought his pending retirement would stick, unlike some other performers who stay retired for three or four years then return, Rogers gave a simple reply, which turned out to be quite prophetic.

“In four years I’ll be 81,” he laughed. “And I don’t like my chances for touring then. It’s the chance to retire with dignity.”

In addition to being able to retire with dignity, Rogers said he was also looking forward to spending more time with his family.

“In my autobiography, I wrote ‘sometimes there’s a fine line between being driven, and being selfish,’” he said. “I think when I was younger, I was selfish, and I chose success over my family, and I think I paid a price for that, and I was kind of determined not to do that (again).

“I have kind of a bucket list for my boys and I want to make sure I get it done.”

Speaking of getting things done, Rogers the list of things he wanted to accomplish professionally was complete.

“I’ve done every thing I set out to do, and more than I ever thought I would do,” he said. “I think getting into the Hall of Fame was the clincher for me. It was something I really wanted to accomplish, and it took me a long time to do it.

In addition to being a part of so many people’s lives, Rogers had a special place in the heart of the Clark family. My grandfather, Kenneth Clark, who grandma referred to as “Kenny,” had white hair and a white beard as long as I was alive, of course leading to comparisons to Rogers. Of course, that meant grandma had all the albums, or 8-tracks back then, and we always watched every movie and TV special he headlined.

When I got the chance to chat with him in 2016, I made sure to ask about a personal favorite, the 1982 racing comedy “Six Pack” which has aged into sort of a cult classic among folks of a certain age and era.

“You don’t know how many grown men have come up to me and said ‘’Six Pack’ was my favorite movie when I was a kid,” he laughed.

Rogers admitted the film held a special place in his heart, and he had recently watched it with his two sons.

“I had no idea the language we used in that film,” he continued to laugh. “I told them here’s the trick, you’re old enough to hear it, but not old enough to use it.”

Rogers also became a full-fledged member of pop culture history when his line of rotisserie chicken restaurants, Kenny Rogers Roasters, was featured as an integral part of an episode during the eighth season of “Seinfeld,” a show which ranks among the best television shows of all time, according to Entertainment Weekly, Rolling Stone, TV Guide and many others.

The episode, “The Chicken Roaster,” aired Nov. 14, 1996, and while it did not feature Rogers, he was mentioned several times.

In 2013, Rogers partnered with Billy Dean to present “The Toy Shoppe” at the Starlite Theatre, which also starred Dean. Rogers and his family visited Branson Landing for a special ribbon cutting before the show opened.

At the end of my 2016 interview, Rogers said no matter what else he decided to do when he retired, he was going to make sure he was happy.

“When I was at the bottom of my career, less successful than I had been, I was always happy,” he said. “I thought, ‘Wait a minute, I’m doing what I set out to do, which is make music.’ I found that to be a very comforting feeling.””